The Boys Are Back and Off To A Bloody Wild Beginning

I’ve been a fan of The Boys since it was just a wild and bloody graphic novel. Hell, I’m still surprised it got adapted for streaming at all, given the subject material. So the chance to cover Season 3 was too exciting to say no to. And as this review of the first episode, Payback, will show, they’re continuing not to pull any punches since it’s last season finale.

Payback begins with a delightfully tongue-in-cheek scene. It shows Homelander confronting a blonde version of Stormfront played by Charlize Theron. Turns out, they had to retool The Seven movie after the reveal that Stormfront was an actual Nazi, and now Homelander is against the Uberbitch. Or so his lines say. 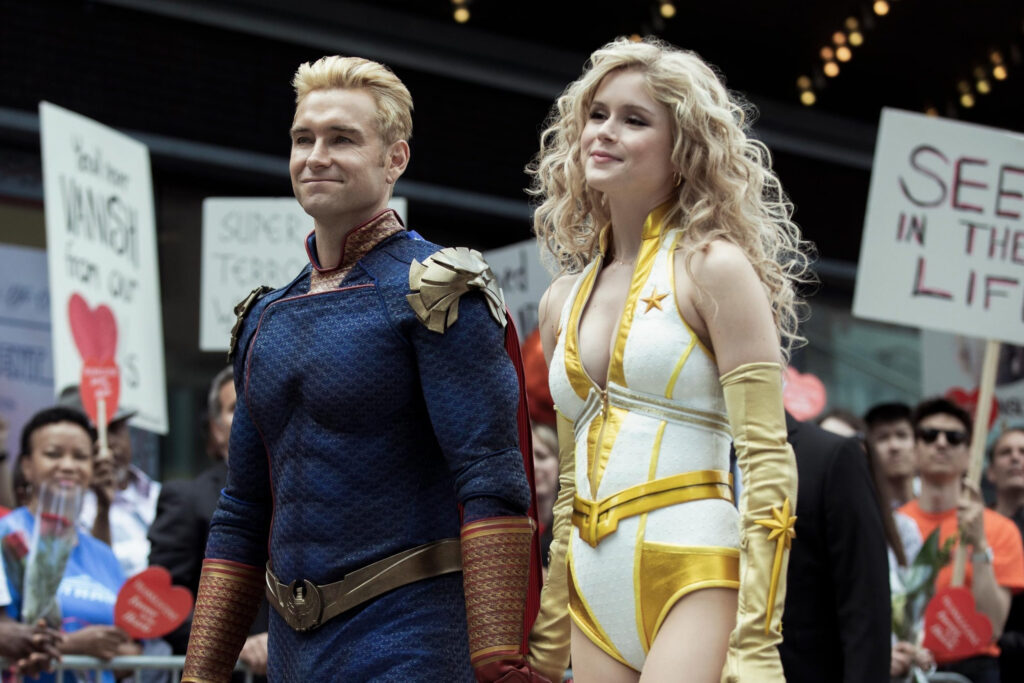 When we get back to reality, the adapted movie is a hit, but people are still very much questioning Homelander’s allegiances. Meanwhile the superpowered maniac is just one bad moment away from lasering everyone to bloody chunks. Maeve’s threat from last season is still holding him at bay, but just barely.

Things are going well for Hughie, at least at first. He’s spending a lot of time with Starlight, in and out of the bedroom. And his new job at the FBSA (Federal Bureau of Superhuman Affairs) seems to be much more stable and grounded than when he was Butcher’s whipping boy. He spends his days gathering intel and then sending Butcher, Frenchie and Kimiko to collect dirt on superpowered douchebags. Neumann and him have a great shorthand and lots of oddly flirty energy, though she does have a bad tendency to steal bites from his sandwiches. And perhaps most shocking of all, Hughie is kind of a celebrity at his new job. Both for dating Starlight and helping deal with Stormfront a year ago.

As for Butcher, he’s still enjoying hunting supes, but he’s less than happy about playing by someone else’s rules. He actually reports to Hughie now, which obviously grates on him. As does the fact MM left the group to be a father. But he’s still trying to play ball, even when his latest surveillance quickly goes horribly wrong. Frenchie and Kimiko are surveilling someone named Termite at a wild party. Think Ant-Man but as a giant asshole, and you’re on the right track.

Things go incredibly badly when Termite does some coke and then jumps somewhere he really shouldn’t, only to sneeze and accidentally enlarge himself, murdering his boyfriend in the process. When Frenchie and Kimiko arrive, the Supe doesn’t want them talking about what happened, so he starts throwing the two around with enhanced strength and minuscule stature. He nearly does Frenchie in before Butcher arrives, literally bagging the little bastard and then tossing him in a small pile of cocaine, which finally knocks him on his ass. 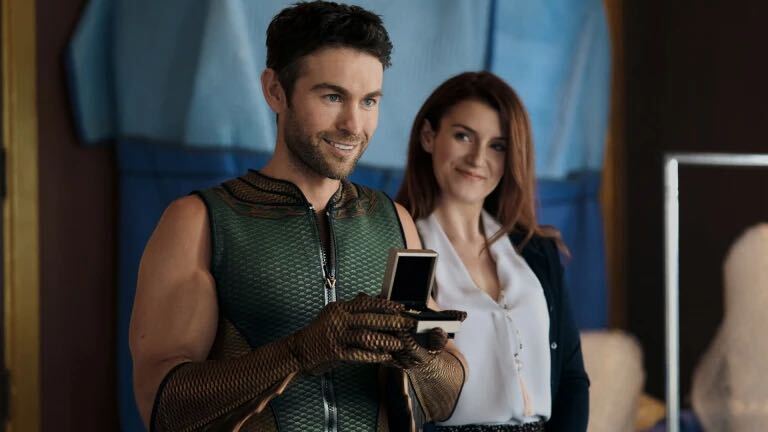 Although he’s not front and center, the Deep is still a good comic foil. The blithering idiot managed to escape his cult after Neumann blew up the cult leader’s brain, but nobody seems to be aware of that little detail yet. Surprisingly, Deep still has his prearranged wife hanging around him. A-Train is still doing lots of photo ops, but it seems his powers aren’t what they used to be. Homelander even cruelly mocks him about his eating habits at one point in the episode, after seeing A-Train sipping some macchiato monstrosity.

The big reveal in Payback is that Stan Edgar is trying to sell the US government on superpowered soldiers again. But there’s a twist this time. He has a new, untested formula that is supposed to only give people powers for 24 hours or so. Supposedly that would remove the issue of super-powered divas, though I have my doubts. So does Jim Beaver’s character, Secretary of Defense Singer. Looks like he’s aiming to become president, and Edgar is trying to leverage him before that even happens. Regardless, someone else brings a few doses to Butcher later in the episode, saying that’s the only way he’ll be able to get what he needs to finally take Homelander down permanently.

There’s a lot of fun moments in Payback. MM is at an especially awkward birthday party for his little girl. His wife has apparently left him for some milquetoast bozo, and MM is gritting his teeth and trying to live a normal life, while still doing research on supes in his free time. We also see a bloody confrontation between Neumann and someone that knows her dark secrets. Even Butcher gets a lighthearted scene with his wife’s superpowered son. But perhaps my favorite moment is when Kimiko suddenly starts singing beautifully. It only happens in her mind’s eye, but actress Karen Fukuhara has some real pipes and a lovely tone. Later on she’s trying in vain to recreate the song with a keyboard, and driving Butcher nuts in the bargain.

Overall Payback was a great start to Season 3 of The Boys. It was bloody, funny and twisted. And as a fan of the comic, I’ve been waiting for The Boys to get temporary superpowers for a while. I’m sure there’s only more delightful insanity to come. So be sure and stay tuned for our upcoming reviews of the rest of the season!