This week on ‘Teen Wolf’: “After Images” follows Gerard and the guidance counselor as they team up to turn all of Beacon Hills against Scott’s pack.

In case you weren’t aware, Tyler Posey directed this episode! I wanted to love ‘After Images,’ solely for that reason, but I’m not sold on the premise of Teen Wolf’s final season just yet. 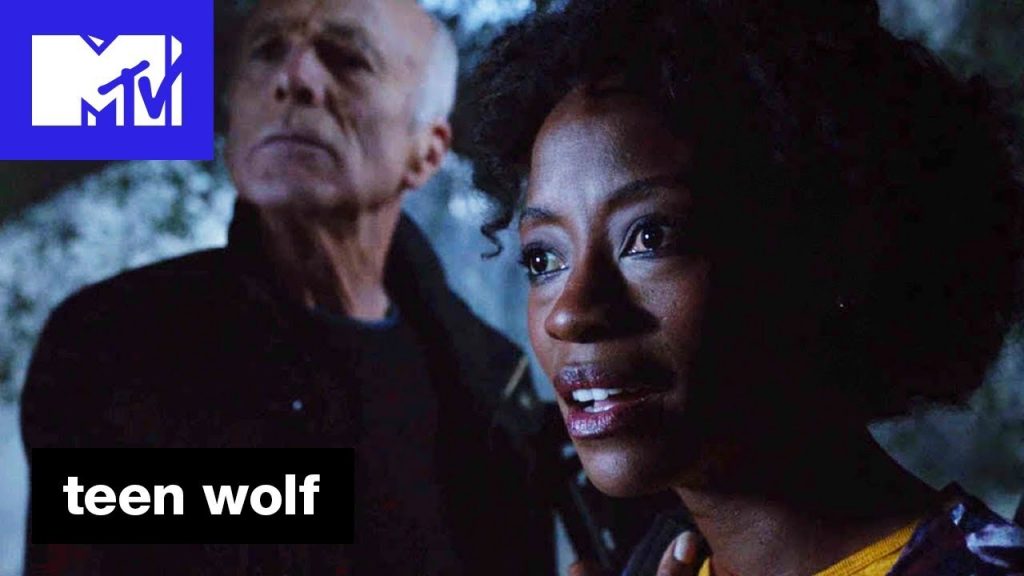 Brett vs. Gerard & The Murdercounselor

Gerard and the murderous guidance counselor continue chasing Brett through the woods. I still don’t understand what the guidance counselor’s deal is. She knows all about Hellhounds and Werewolves but doesn’t appear to actually be a hunter. Whoever she is, the guidance counselor has no problem trusting Gerard right away. Maybe it’s his sweet old man demeanor? I have not cared about Brett before this episode, but while watching him hurl an arrow at the hunters, I suddenly really don’t want him to die. Which of course means he’s going to die. Brett leads them underground into tunnels that we’ve seen a million times before, and I am STRESSED. 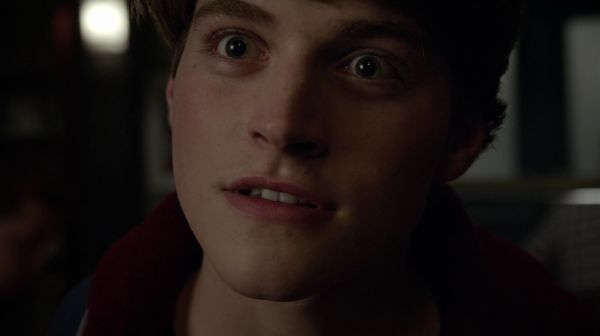 While playing video games, Mason confesses to Liam that he can’t stop seeing the body they found without a face. He describes it as seeing “after images,” which conveniently is the episode title. I’d like to point out that this is actually more of a reaction to trauma than a trick of the eye. Everyone in Beacon Hills could really use some therapy, which is why it bums me out that the new guidance counselor has to be a killer. Once Lori (I don’t feel like I retained the information that Brett has a sister) tells them he’s missing, Liam and Mason decide to go find Lydia and see if they can track down Brett. This leads to a great scene in the chemistry lab where Corey and Mason watch Lydia use a Bunsen burner to try to initiate a premonition. I like the Mason/Lydia dynamic, which started back in Season 4, a lot. Give me more Mason/Lydia scenes! Some very creepy automatic writing leads Lydia, Corey and Mason to the number 68. This causes Lydia to wander around the school looking for things involving the number 68. She takes 68 steps, she goes to locker number 68. No luck.

Nolan jolts awake in the library (I still have no idea who Nolan is), and he’s suddenly joined by the little baby-faced freshman who we thought died in the last episode, but faked us all out. He and Nolan have a cryptic conversation seemingly referencing Corey’s ability to become invisible, and baby-face suggests that he has a way to prove it. Nolan and his crazy eyes join Mason and Corey at the table, claiming he wants to study for a biology test, but instead he starts asking lots of weird questions. Nolan’s eyes get wider and wider and crazier and crazier, and then all of a sudden he lunges across the table, stabbing Corey with a pen. For literally the first time ever, the students of Beacon Hills High School pay attention to something like this, and notice that Corey healed. Nolan sprints out of the library and bumps into Lydia who notices that he’s wearing a number 68 lacrosse jersey. When she questions him, he turns his crazy eyes on her and says “You’re one of them, aren’t you?” before running off, still clutching the pen with Corey’s blood on it. 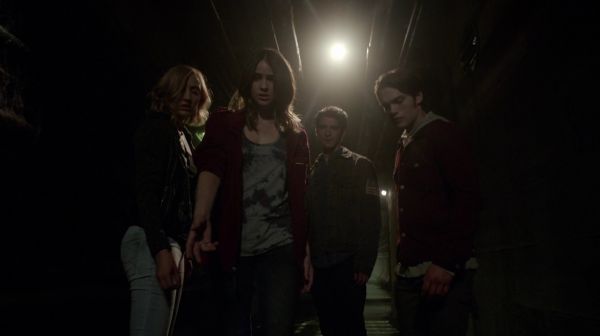 Liam is the new Scott McCall

Scott, Malia, Liam, and Lori head into the woods to track Brett. They are all disagreeing about the best way to take on the hunters, and Liam decides that he is the one that should make a decision. Scott seems to be stepping back and letting Liam act as the alpha and it’s freaking cute. Liam leads the group underground and makes another (poor) decision to howl to let Brett know they’re coming. Gerard and the guidance counselor hear this, and Gerard comments on how they’ll be able to stop the pack because Scott McCall thinks with his heart, not with strategy. Speaking of thinking with his heart, Scott jumps in front of a trap to save his friends, and is pinned to the wall by some kind of horrible spear. Liam is giving off some real Season 1 and 2 Scotty McCall vibes because he doesn’t want to hear Scott’s advice about hunters, he just wants to save everyone.

Liam and Lori leave Scott and Malia behind and continue into the tunnels in search of Brett. I admire Liam’s heart, but I’m pretty sure this isn’t going to work out the way he wants it to. He should have listened to Scott because when they finally find Brett who looks (and smells) like he’s dying, they are immediately found by hunters. Liam tries to hold them off as Lori and Brett run for freedom, but he realizes that the hunters are herding them where they want them to go. Before Liam can get to his friends, they climb out of the tunnel and Brett is hit by a hunter’s car which finally kills him. Damn. RIP Brett. 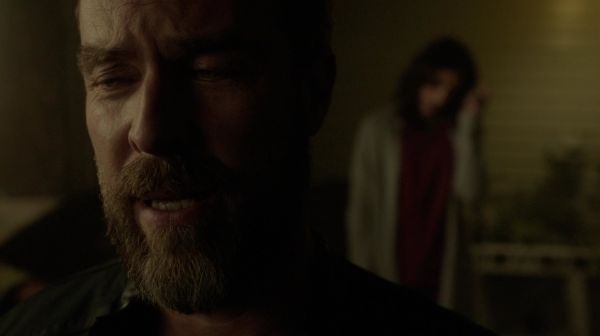 Chris Argent and Melissa McCall are my new OTP

This week, Melissa McCall seems to work exclusively in the morgue. I don’t know a lot about what nurses do, but I feel like there’s more interaction with live patients. As an actress, Melissa Ponzio is a gift to this show, and watching her give herself a pep talk as Melissa McCall is delightful. Melissa psyches herself up to cut into the faceless dead body found in the locker room, when the lights start flickering like crazy. At this point I was screaming at my tv that the body had better not be full of spiders, and luckily it wasn’t. Thankfully Melissa calls Chris Argent to help with the terrifying body because “someone needed to call someone.” Chris holds the body at gunpoint while Melissa tries to take a tissue sample, and since Melissa is not only a nurse, but a scientist, they take the tissue sample to a lab to examine it under a microscope, only to discover it has no DNA, and no cell structure.

Chris offers to give Melissa a gun, which makes me laugh, and all of a sudden I want them to kiss more than I have ever wanted anyone to kiss. Chris says he should go, but Melissa says he doesn’t have to. Before we see them make out, the scene cuts to black. I’m mad that Teen Wolf cheated me out of this kiss! We should have seen it! 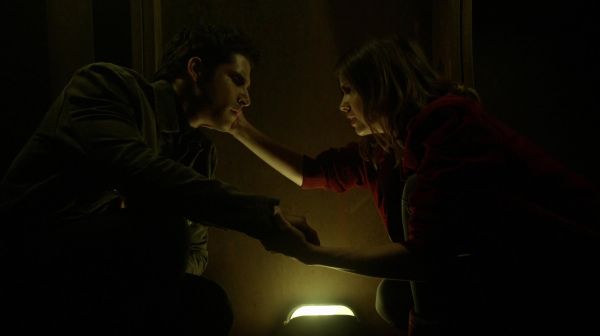 I’m also very on board for Scott and Malia!

Malia stays with Scott after he is injured, and as they run down the list of who could possibly have set traps in the tunnels, they realize the last hunter they saw down there was Gerard. Scott isn’t healing and Malia is trying to take his pain but can’t figure it out. Malia is understandably upset and says they should have called Stiles, which leads to the best exchange of the entire episode. Malia says that she’s going to lose Scott, and then tries to cover up by saying they’ll all lose Scott. As he’s passing out, Scott replies by saying he thinks Stiles “would be okay…with us.” Insert my screams here. I had no feelings about Scott and Malia until this exchange and now I am 100% on board. 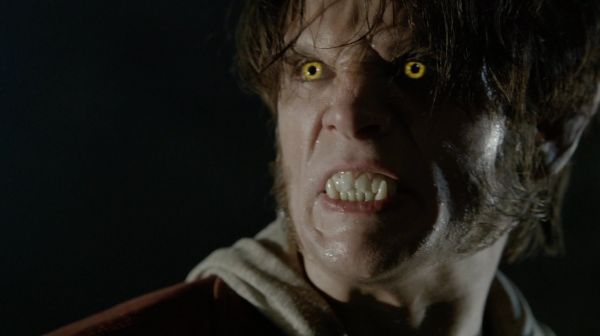 The best way to create an army is through fear

Lydia, Mason and Corey realize that Nolan wasn’t trying to harm Corey, he was trying to expose him. Their original interpretation of Lydia’s premonition was wrong. It’s not about everyone turning on each other, it’s about everyone turning on Scott’s pack. Gerard says that the best way to create an army is through fear, and we see Liam standing of Brett and Lori’s bodies, fully wolfed out, surrounded by people staring at him. Damn.