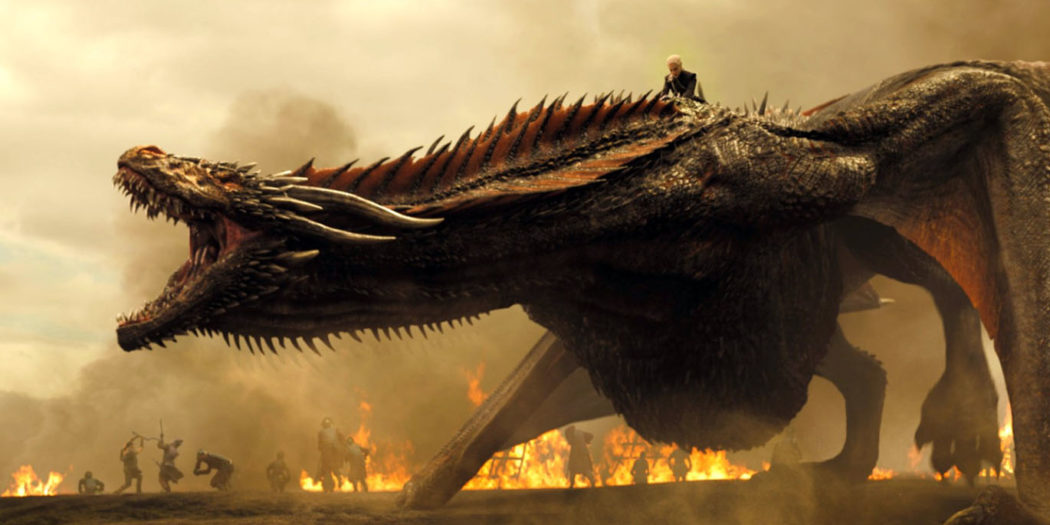 ‘Game of Thrones’ – “The Spoils of War”: Just Another Prick in the Balls

This week on #GameofThrones: Dany takes the war into her own hands, Arya remembers why she hates the patriarchy, Jaime and Bronn’s bromance heats up.

Spoilers through Game of Thrones 7×04: “The Spoils of War”.

It’s clear why Game of Thrones needed shorter seasons: there’s no way they could have afforded the special effects necessary for each battle sequence had they stuck to the usual ten episode season. With all the explosions and battles we’ve seen in season seven alone and then all the fights we know are yet to come, even HBO can’t print the money needed for ten episodes of those shenanigans. “The Spoils of War” offered fans a battle sequence we usually only see once toward the end of the season and oh my goodness, was it satisfying.

Despite the stellar ending, my main takeaway from “The Spoils of War” was how Bronn’s off-hand comment about getting a “prick in the balls” seemed to relate to so many of the character’s this week. (And how it made me think of Pink Floyd’s The Wall.) Don’t worry; I’ll show you through the power of photoshop.

Out on the fields of who-fucking-knows-where Westeros, Jaime and Bronn celebrate the Highgarden victory the best way they know how: Jaime by brooding and generally being a disagreeable shit and Bronn by fondling his gold. Bronn wants a castle, particularly the now empty one that controls the Reach, and Jaime tells him no because he gets off on withholding. (Like brother, like sister.)

Bronn asks if Olenna got off one last prick in the balls against Jaime and honestly, I’m shocked at how many of you don’t remember that line. It’s brilliant, BILAL.

Grandpa Tarly rides by with Dickon, and Bronn and the audience share a giggle. Tarly makes some mention about troop movement and how “back in my day, we hiked 1000 kilometers after sacking a castle”. Jaime waves off the military commander’s suggestion to flog the troops because the poor things only move quickly for avocados and can’t afford thatch houses. Tarly huffs and puffs about the new slacker generation and rides off on his horse that only cost him two gold coins because he smartly bought it before the war broke out.

In King’s Landing, Cersei pays off the crown’s debt in record time and Tycho goes off to spend some alone with all his newfound riches.

Like any true-blue American, once Cersei has paid off her debt, she immediately begins contemplating how to skyrocket herself back into the red because nothing brings joy quite like gold, war, and self-loathing. (Also her favorite traits about Jaime.)

A Stark Contrast in Reunions

Bran continues to be a little robotic shit in Winterfell and at this point, I’m beginning to wonder why he’s even there. Not even the Lannisters get off that much on withholding information. Bran has yet to divulge any important information to his family, but he has managed to emotionally destroy both Sansa and Meera, the latter of which is especially messed up considering that she has sacrificed almost everything for him. 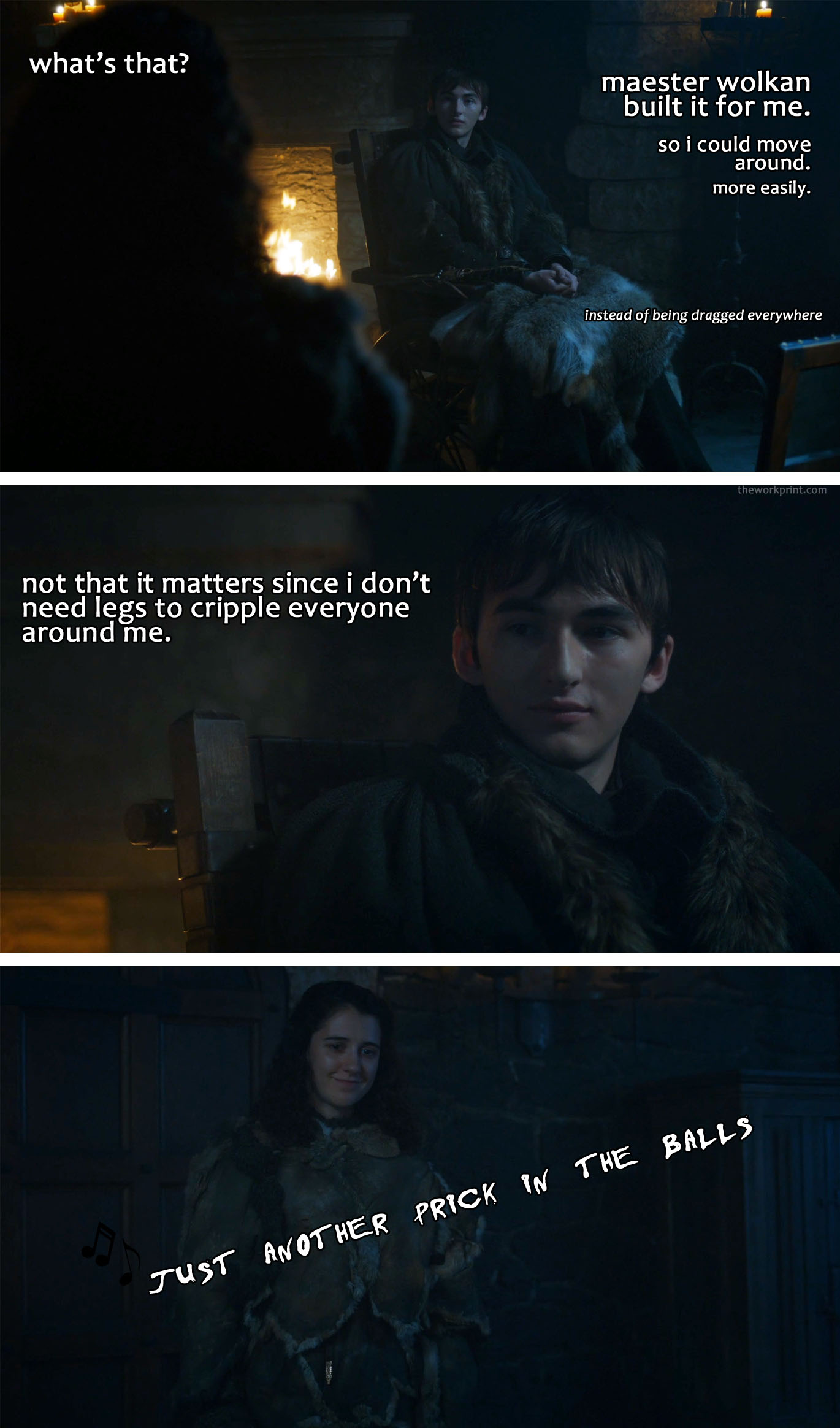 Let’s recap all of the things that Meera has done to help Bran: she helped drag his crippled ass north of the wall, past wildlings and white walkers, only to lose her brother Jojen. When Bran messed up and let the Night King into the Children of the Forest’s cave, they killed ALL of the Children, the Three-Eyed Raven, Hodor, AND SUMMER. Meera made sure that Bran got out alive. Meera then dragged his broken butt back south, making sure he was fed and didn’t, you know, die. I recognize that Bran is on a “hero’s journey” and sometimes that involves loss, but even in his Bran 2.0 state, the dude should be able to muster a thank you without making a girl cry first. 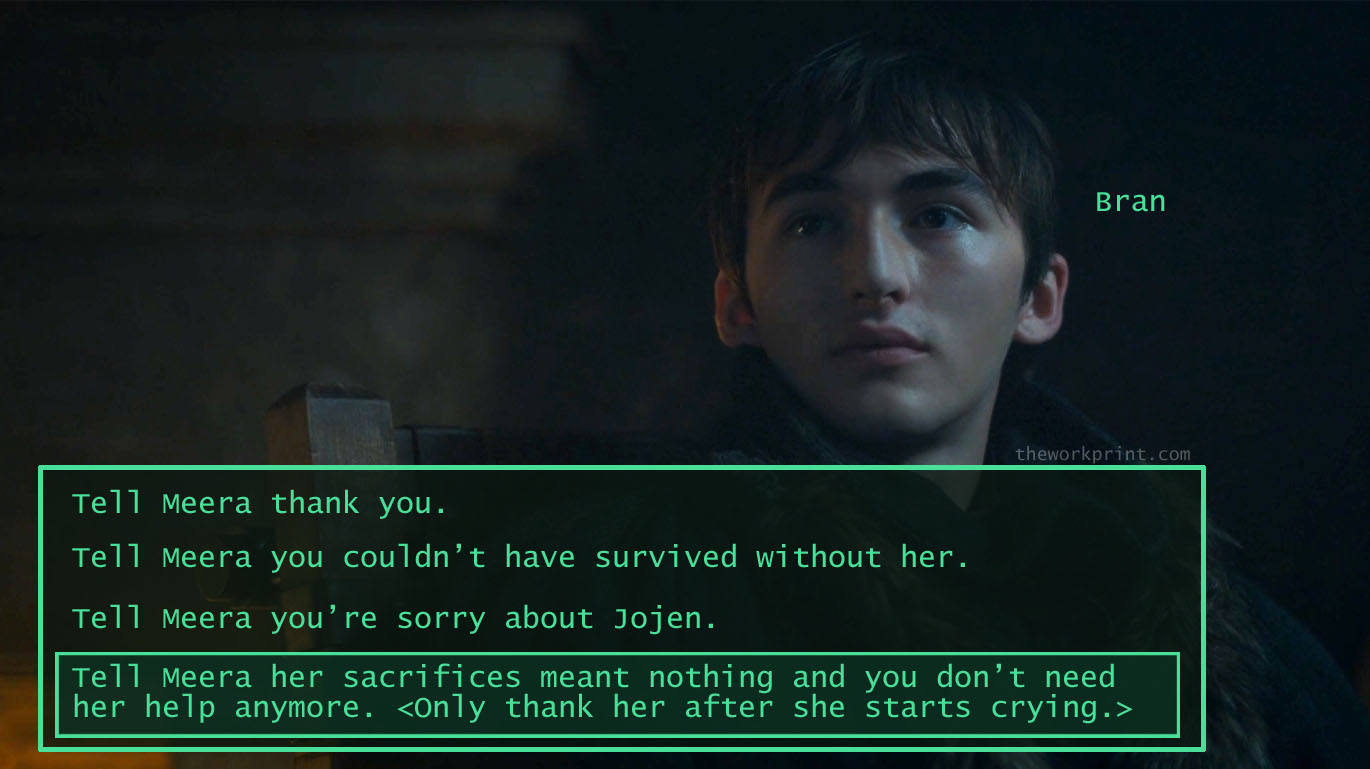 Yes, yes. I know that the dude in the wheelchair isn’t really “Bran” anymore and he’s just an AI in Bran’s body, but if I’ve learned anything from science fiction, it’s that robots can have and understand emotions too. You can’t tell me that the Android from Dark Matter is devoid of emotion. YOU KNOW BETTER, BRAN.

Baby girl Arya FINALLY makes it back to Winterfell and I couldn’t be happier. Home girl has had nothing but a bad streak of luck and look how strong she’s come out! Upon arriving at Winterfell, she comes face to face with the walking embodiment of douchebag, but thankfully Arya has a +10 against douchebags attack modifier so she’s cool. I will say I know it’s for effect but it is a smidge irritating that Bran was rolled in without a hitch but Arya has to fight tooth and nail to prove she’s a Stark.

AND THEN ARYA AND SANSA REUNITE AND IT’S BEAUTIFUL.

Honestly, can we talk about how awesome Sansa is when she reunites with every one of her siblings? Jon came back from the dead and she was like, “Okay, I still love you. Let’s keep an eye on your back.” Bran came back as a friggin’ bird who reminded her of her worst moment and still she’s all, “Yea, but all little brothers are weird. I love him. Don’t be alone with him. Ever.” Then Arya comes home, reeking of frey pies and murder and Sansa just smiles, “GOOD FOR YOU SWEETIE. WE’RE SO PROUD.” I know that we still expect Sansa to be this prim and proper lady who takes care of the menial chores like food supplies, but let’s not forget that she also fed her ex-husband and rapist to his dogs. Girl ain’t playing either, she just has a different set of the rules than all these other crazy Stark children.

Even better than the Sansa and Arya reunion was Brienne and Arya sparring in the courtyard. Honestly, it was a better fight sequence than the one at the end of the episode but it didn’t involve explosions and fire so…you know. Brienne was all proud mama bear over Arya’s skill level and they even sang a duet about it: 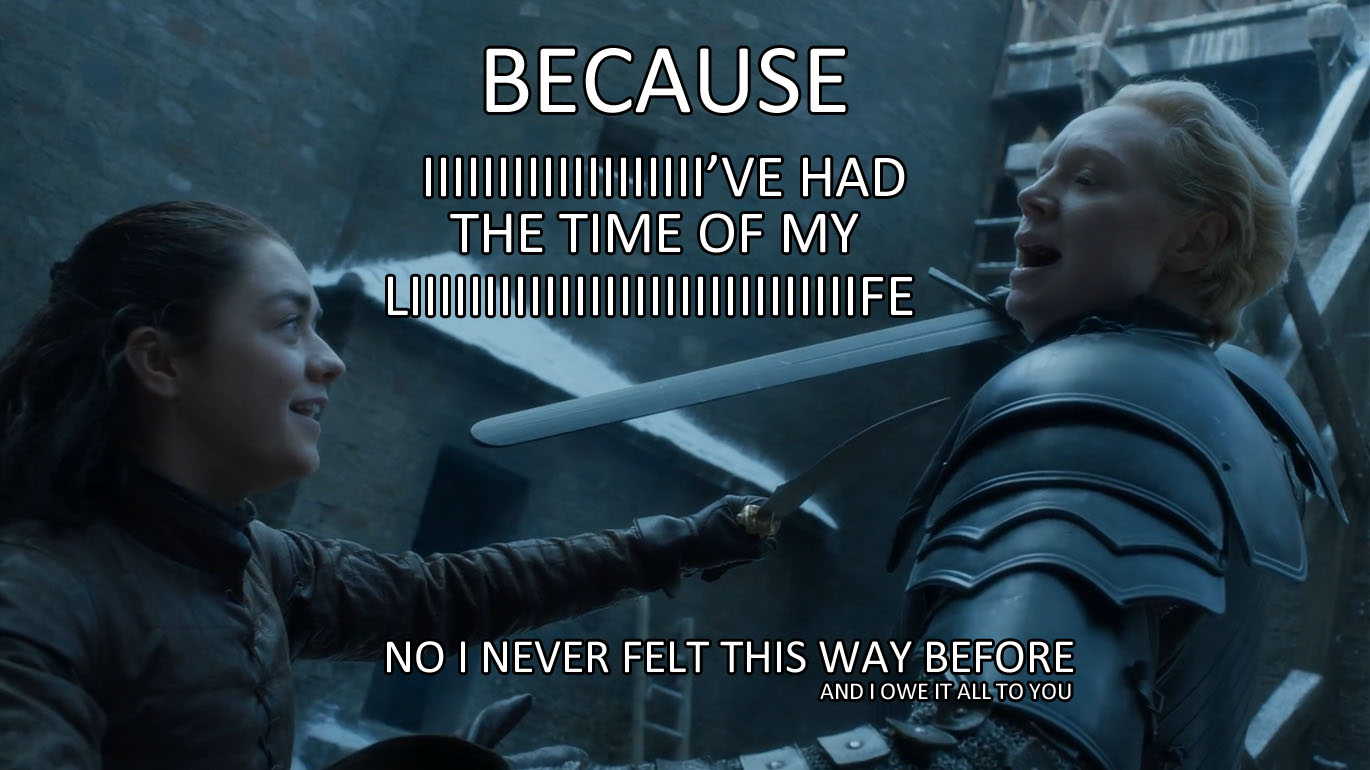 Sansa had to step away because seeing Arya duel Brienne with such finesse reminded her that she put all of her points into charisma and intelligence and sometimes those stats don’t have really awesome physical abilities.

Still imprisoned on Dragonstone, Jon wastes little time in showing Dany how flexible he is without actually bending his knees. He even interrupts a saucy conversation between Dany and Missandei and totally didn’t just wait around the corner for the two girls to get to the good bits before announcing his presence and then taking Dany into a dimly lit cave. We know Jon Snow knows few things, but one of the things he does know, he learned in a similar dimly lit cave with a fiery girl who also didn’t buy his bullshit.

Jon shows Dany the paintings and Dany finally starts to believe him about the White Walkers. She doesn’t question why the white walker carvings were drawn with such care and intimacy, almost as if the artist respected the enemy, but hey, Dany’s never been one for details. She’s sympathetic to the plight of the Long Winter, but she still has a war at all sides and says she’ll aid Jon if he BENDS. THE. DAMN. KNEE. Look, I know some are going to argue and call Dany all manner of names for being stubborn with Jon Snow, especially after just losing all of her allies in two engagements, but I applaud Dany’s strength. The Mother of Dragons isn’t about to give in to some northern prick who comes riding in with good hair and a notebook full of emo poetry. She’s made her concessions, now it’s up to Jon to make his.

After Dany gets the news about Casterly, she goes full dragon, ready to scorch the earth. Jon does give her some solid advice so she doesn’t set fire to King’s Landing right away. There’s probably still a good chance it’ll happen, though.

Jon and Davos have a moment with Missandei where Davos shows off his flirting abilities. (I bet Davos has the BEST dad jokes.) I know there’s a theory out there that Missandei is going to be the one to betray Dany and if that happens, I will be FURIOUS. Game of Thrones doesn’t offer many great female relationships. There are plenty of male buddy partnerships–Bronn/Jaime, Tyrion/Varys, Jon/Davos–but there aren’t any female friendships. Having Missandei betray Dany goes against what they’ve built up so well between the two over the years. Besides, I think it will be Jorah who betrays Dany.

A squid washes up on shore and Jon wants to throw it back, but he realizes that Theon might be important to maintaining allies, especially if he wants to continue to endear himself to Dany. (Since the drawing thing didn’t woo her as intended.) It’s not that exciting a sequence, but it’s important for closing up story gaps and for establishing Jon as the good guy who still doesn’t know how to make an angry face.

Jaime and Bronn are having a picnic when the earth rumbles beneath them and they realize that they probably should have had scouts or something keeping an eye out for retaliation. Honestly, I’m not military commander, but it’s that Battle 101? Didn’t Robb have scouts literally everywhere in the Riverlands? Aren’t you supposed to send ravens when you notice a troop’s movement? Can’t they practically see Dragonstone from the Red Keep?

In any event, Dany “sneaks up” on the Lannister army with a charging Dothraki horde and a full-grown dragon and proceeds to destroy everything in their loot train. Scores of Lannisters soldiers die and even though Game of Thrones tried to humanize them with Ed Sheeran, the deaths don’t make much of an impact. In fact, despite my love for Cersei, I’m okay with the Lannisters losing, and that includes Jaime.

It was an explosive scene with lots of boom booms and screams, enough to make any Michael Bay fan giddy with anticipation. I cheered as Dany rode in on Drogon, ready to fuck up everything the Lannisters had “earned.” There is no better word in Thrones history than “Dracarys”. It was a great sequence, an exciting and tense sequence that culminated in Cersei’s ballista proving useful, Drogon getting injured, and then Jaime charging headfirst into a dragon’s mouth. 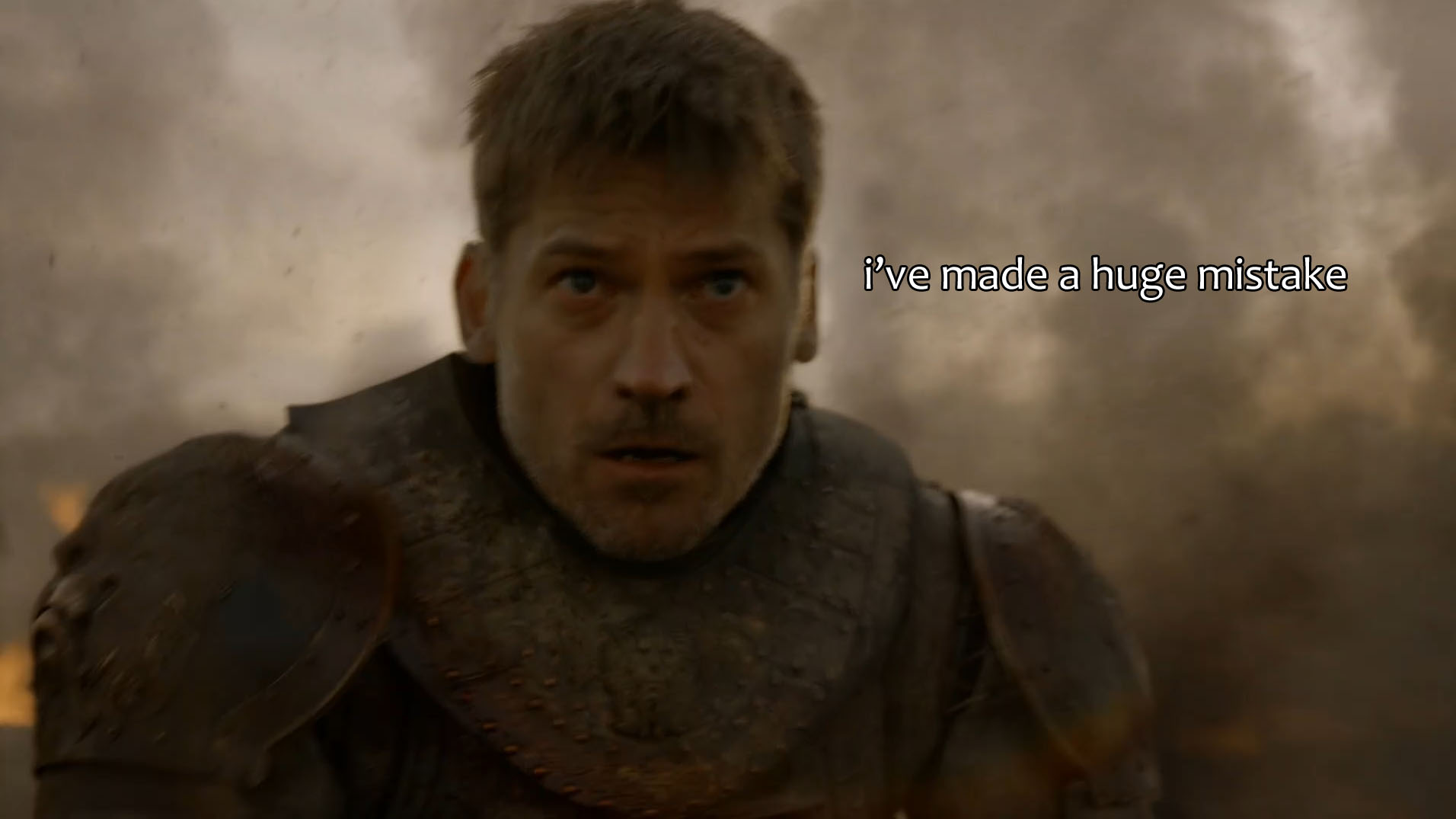 Bronn ultimately saves Jaime’s heroic self and that’s twice in a matter of minutes that Bronn has chosen the greater good over the gold in his pockets. Maybe being around Jaime has made the salty knight a bit more noble. More noble that Tyrion would have ever expected, at least. The Lannisters loss at the loot train will be instrumental for Dany, but I can’t imagine that Cersei will see this as anymore than a setback, especially now that she has the backing of the Iron Bank.

I am totally, 100% #teamDany. As long as Sansa doesn’t die, I don’t care who she has to kill to make it happen.

I make a lot of images for these posts that often don’t end up in the review itself. Check out my Twitter for extras, like things like the “My Life As A Background Dothraki” series. 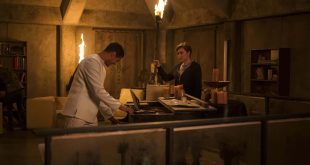 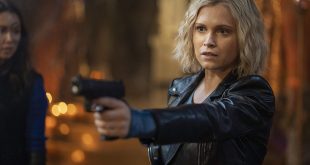 Alas, the Old Ones have returned and it’s not in a B class horror film! Sundown – the pilot for Lovecraft Country is finally available on HBO, and holy baby Cthulhus it is amazing!