‘Supergirl’: A Tale of Two Liars in “Star-Crossed”

This week on Supergirl: SHOCKING NEWS – Mon-El is the Prince of Daxam and Kara finds out the truth; the SuperFriends chase down stolen art.

Remember two weeks ago when we had that great episode full of Supergirl heroics, a badass Alex, sweet moments between the Danvers sisters, and only snippets of Mon-El? Ah, it was a simpler time, wasn’t it? A time that reminded us of the good from Supergirl’s first season, when she was a hero first, a sister second, and boys didn’t dominate her life.

If it feels like every Supergirl recap has morphed into a “Bash Mon-El party,” then you aren’t alone. Believe me, as much as I write about the selfish Daxamite, I loathe him even more. I grow tired of complaining about him every week, but I also think it’s important that we, as consumers, voice our disdain for this poor representation of a “healthy” relationship. As Bill Pullman, the hero of Independence Day, once said:

“We will not go quietly into the night! We will not vanish without a fight!”

However, I won’t spend this entire review dumping on Mon-El because it’s honestly too easy at this point.

Aliens show up in a ship that looks like the chemical formula for ribonucleic acid demanding that Earth hand over Mon-El or they’ll attack and for the life of me I’m not sure why everyone wasn’t like, “Yea sure, take him. He’s yours. He is more messed up than Barry Allen and the Earth-1 timeline.”

An aside: how is that alien invaders can show up to another planet and hack into all of their technology on a whim to deliver threats but I still have trouble getting more than three people into the same Skype call?

NOT ONE PERSON asks Mon-El why aliens would want him and instead Kara flies off to defend her man’s honor because she is kind and heroic and way too good for that piece of smushed sidewalk gum. The ship attacks Supergirl because they’re clearly good, wholesome, and once Mon-El gets a conscious for two seconds, we learn that the invaders are none other than Mommy and Daddy Daxam.

SURPRISE! WHO ELSE DIDN’T KNOW MON-EL WAS A PRINCE?! Honestly, I almost forgot to write that this was a “twist” in the story because it’s been blindingly apparent since Mon-El first arrived. Worst kept secret ever.

The Daxamites invite Kara to a super awkward dinner where Mon-El recounts his epic escape from the exploding planet. Now, I want to make it clear that I don’t actually think Mon-El was awful in this scene. He did what every single one of us would have done in that moment. (And if you disagree with me, you are a lying liar. We’re all at least kind of selfish.) However, you can’t tell me that this exchange wasn’t hilarious: 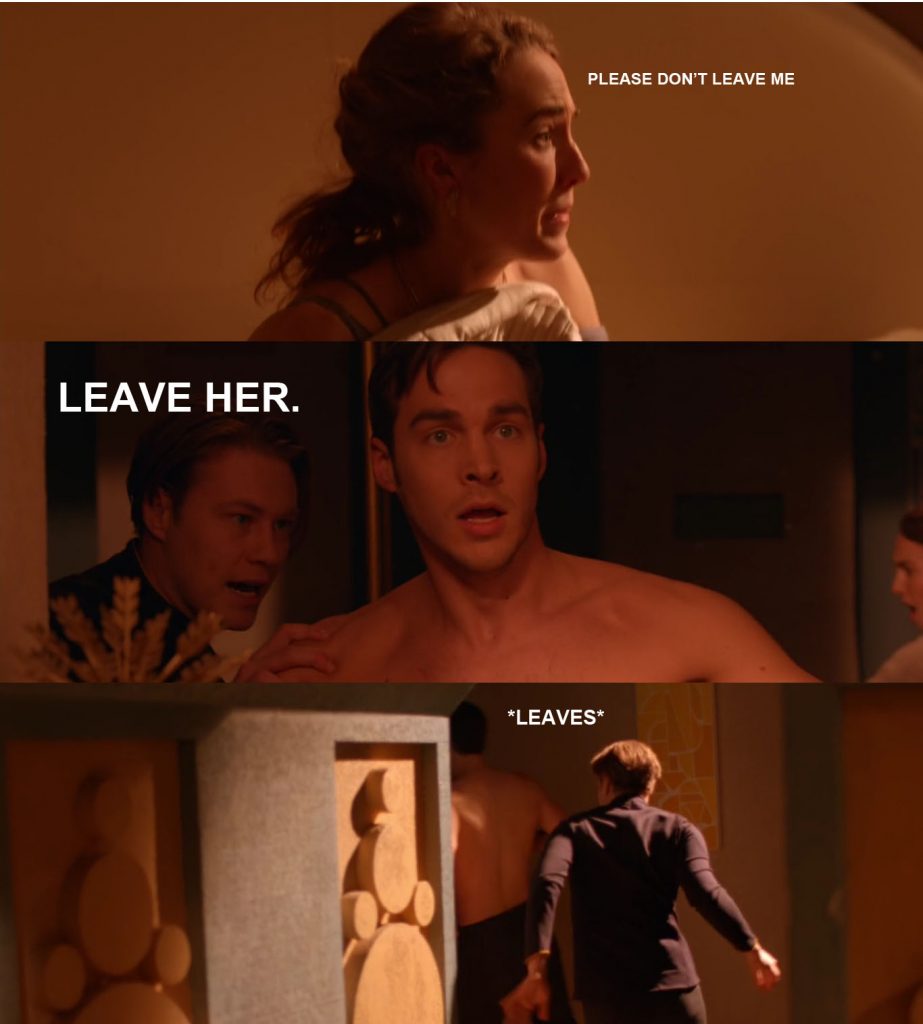 As dinner goes on, Kara learns that Mon-El’s apple didn’t fall far from the tree, as Mommy and Daddy Daxam are caricatures of the spoiled royals.

Papa Daxam: “Remember how good your servants were treated at the palace?”
Kara: “Because you stole them from their families.”
Mama Daxam: “We liberated them from greater hardship.”

If that doesn’t tell you that these slave owners and traders are not great people, the writers slipped in a “Make Daxam Great Again” line just to make certain you understood how awful they are. It’s meant to cast Mon-El in a more favorable light because he may be selfish and arrogant but at least he’s not as bad as mommy and daddy. Which MIGHT work if we didn’t see first hand Lena Luthor owning up to her evil family name and casting it aside, proving that she is nothing like them, time and time again. Lena is proof that you can have familial baggage and still be a good person.

Kara and Mon-El break up because OF COURSE they did. He lied to her. He betrayed her trust. But even more, it wasn’t just about the lies, it was all of it. It was the fact that he didn’t know if he wouldn’t ever lie to her again. It was that he didn’t apologize for his actions, he apologized because he got caught. It was that he used romantic comedies as a reason for why she should forgive him. And that’s just from THIS episode, alone. I don’t have the time or the energy to list out Mon-El’s rap sheet of crimes against Kara Danvers, but if Mama Daxam, a slave trader and generally bad person, knows that Mon-El isn’t good enough for Kara, you take that to the bank, girlfriend. You cash that check. 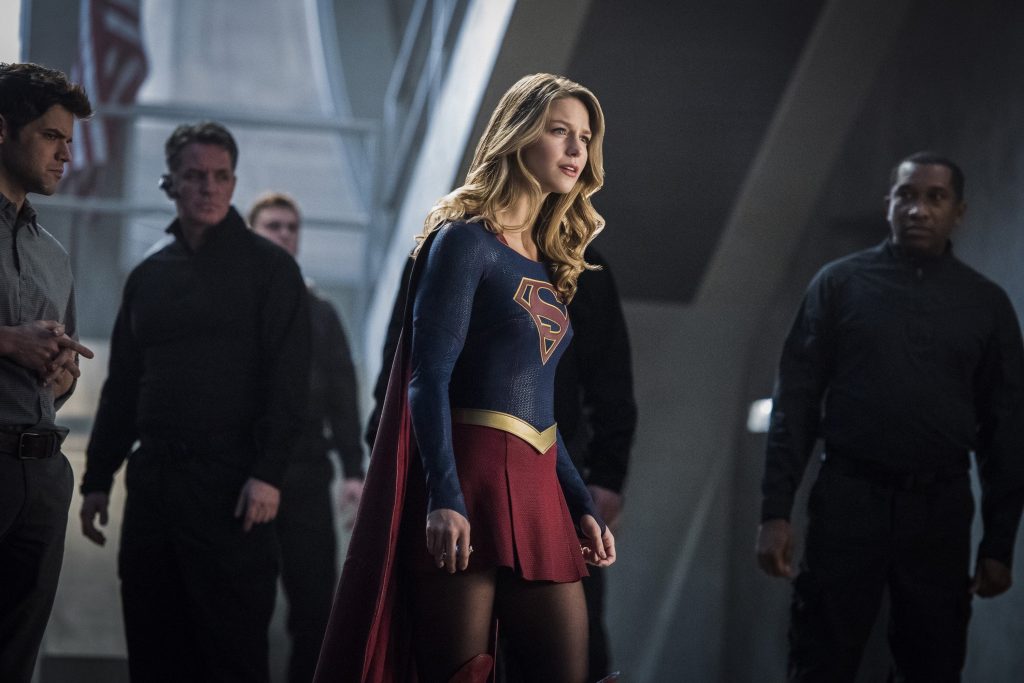 After a few more tearful interactions between Kara and Mon-El, she confirms that they are, in fact, over. And that’s all of Kara’s involvement in the episode. While the SuperFriends were off solving a Nancy Drew mystery, Kara was dealing with boyfriend troubles. Not even life or death boyfriend troubles, just lying boyfriend troubles. And that’s why we’re upset. Because even with the will they/won’t they debacle of season one with James, Kara was still a hero. Kara still fought the bad guys and was feminist icon, someone we all admired.

The Mystery of the Missing Van Gogh

Meanwhile, back at the DEO, Winn gets in trouble for engaging in a little breaking and entering. Maggie brings him into the station and makes poor Winn pee his pants. She accuses him of stealing Starry Night and he’s all, “No, no! We just had sex in front of Starry Night.”

Alex shows up and is all, “how dare you arrest my little goldfish? I’m the only one allowed to make him pee his pants.” Maggie sighs and lets Alex take the love-sick fool back to the DEO to find evidence against Lyra and Alex is all, “kiss pooky. ILU.”

The SuperFriends track Lyra to a trailer park because OF COURSE they do where Guardian and Alex put on their ass-kicking boots to defend their Hufflepuff cupcake, Winn. James hasn’t had a good run this year on Supergirl, but dammit if I don’t love him fighting side by side with Alex. Alex lately has been getting on better with Kara’s friends than Kara. Also, I’m a huge fan of James and Winn being best friends and not arguing over Kara’s affections.

The group learns, NOT through Martian Manhunter’s ability to read minds, that Lyra only stole the painting to save her brother’s life. The SuperFriends leap into action, traveling to a shady ass warehouse to deliver “Starry Night” to the alien art thief.

He’s not pleased with the artist’s impression of the Master’s original and attacks our SuperFriends. James isn’t known for his humor, however, the failed attack on the alien and then the calm delivery of “That usually works. Run.” was fantastic. If he keeps it up, Guardian might just worm his way back into my heart.

The SuperFriends save the day, reuniting Lyra with her brother and bringing Winn and Lyra back together as a couple. Kara talks to Winn about his relationship, because even though Lyra lied to him, he still loves her. I want to make it clear here that while both Mon-El and Lyra lied to their significant others, Lyra lied to save her brother’s lifs, Mon-El lied because he thought Kara might not like him. There’s a difference. 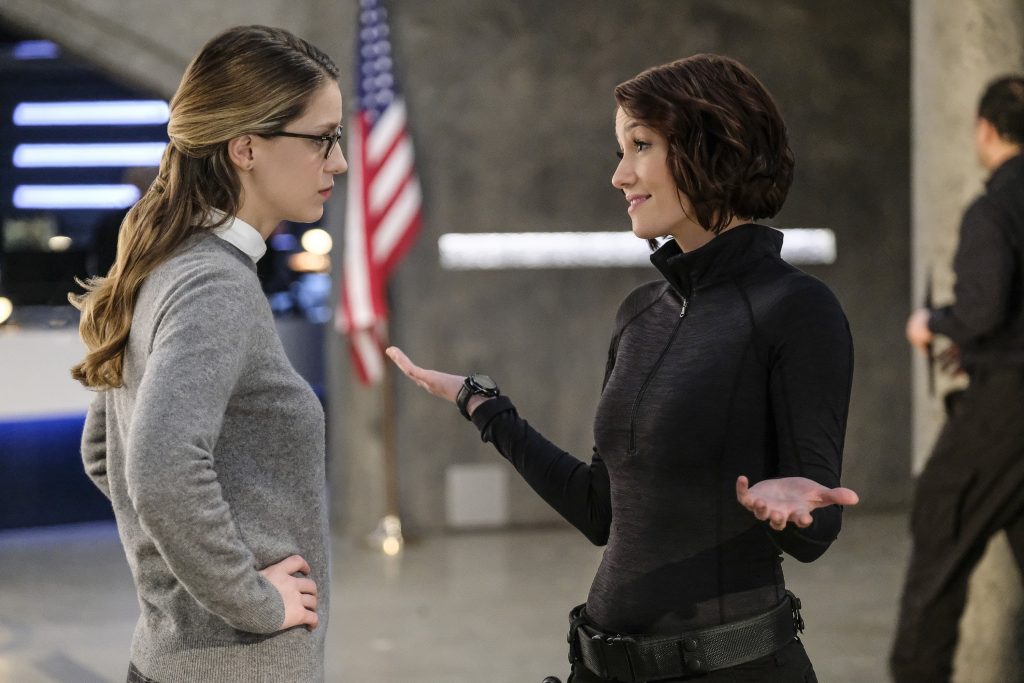 I don’t like that Kara has completely given up on her dreams since Mon-El entered her life. I don’t expect her to be all gung-ho about getting a new job, but the issue I have with them is that, as a good friend once told me, “association breeds assimilation,” and the more Kara hangs out with selfish Mon-El, the more likely she is to become like him.

If Cat Grant could see the things both Kara and Supergirl are doing right now, she would EXPLODE.

DARREN CRISS, OH, HOW I HAVE MISSED YOU.

Next week: Kara punches Mon-El in the face. At least we have that going for us.