‘The Magicians’ Channel Les Mis Before Duel To The Death

In this week’s brilliant episode of The Magicians, team Fillory channel their inner Broadway stars in a rendition of “One More Day” from Les Misérables before Eliot’s deadly duel with the king of Loria.

This is not the first time the show has broken into song, as we first saw this back in season 1 episode 4 when Quentin was being inceptioned by Marina and Julia. In order to communicate with the Penny in the real world, Q broke out into Taylor Swift’s “Shake it Off” because he knew that the traveller hated that song. It was an unexpected moment of humor and ridiculousness in a very dark episode that was perfection.

This time, as Eliot is preparing to do battle with King Idri he confesses to Margo that he’s scared in the throne room because if he dies, they will all become prisoners if not worse. Earlier, Fen had come and saved the day by giving her baby daddy an enchanted sword complete with accompanying spell that would allow a king to become a master swordsman instantly. This is handy because the Lorian royal had fought fourteen duels and without losing once. Margo responds by telling El that she remembers when he showed her a video of his high school production of Les Mis where he totally owned Valjean. She asks to hear it, though Eliot says that he can’t possibly do it because it would seem rather silly plus he couldn’t do it all on his own. But because they’re magicians, Margo quickly cats a spell and Eliot breaks into the opening verse as he continues to practice with his blade. Margo, Fen, and the rest of their entourage join him as they all prepare to meet the Lorians at an open field where the duel is to take place. The poor Lorians are greeted by a singing group of Fillorians and naturally they are confused AF, the expressions on their faces perfectly capturing the ridiculousness of the sight. 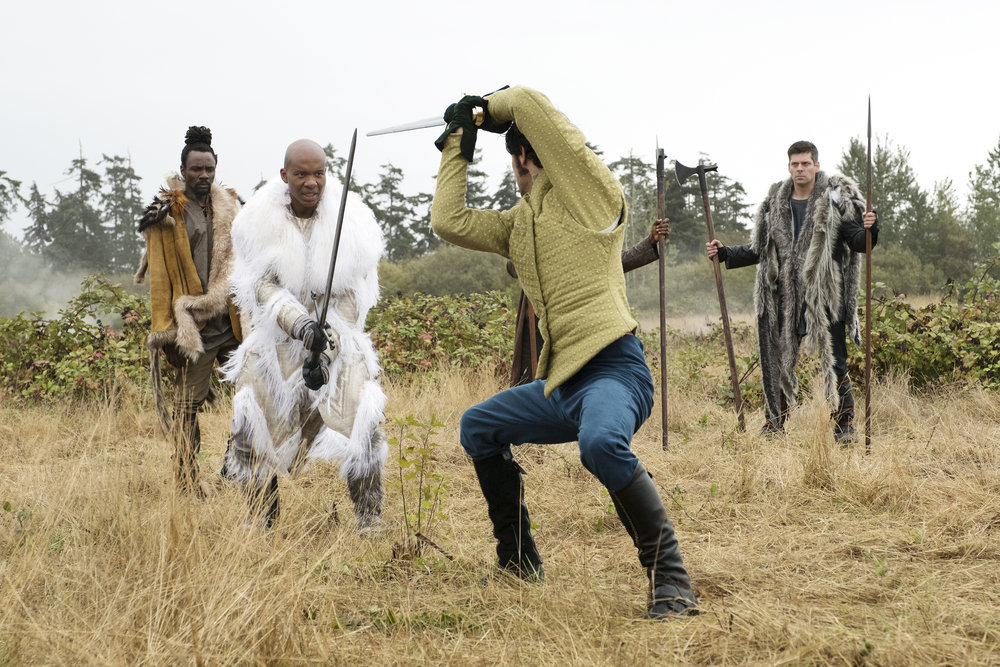 Earlier, Margo pointed out before they broke into song that music will serve to build confidence and destabilize the enemy through projected power. This totally seems to work. Eliot is able to fight Idri, though the other king runs away when its clear the magician has some skills. El follows but the tables turn due to another Wellspring blackout. He climbs up a high tree with the Lorian below waiting for him. In an unexpected turn of events, the duel is resolved peacefully when the two men decide to be lovers instead of fighters because guess what, in this world you could have a queen AND a king. Well ain’t that something. So Fillory and Loria are able to become allies after all thanks to an alternative royal marriage.

Given the seriousness of the situation Margo and Eliot face, it’s a brilliant move to inject this musical moment to lighten the very dark issues facing all the magicians throughout season 2 so far. We’ve had deaths, rapes, exorcisms, shades disappearing, hands getting chopped off, niffins, goblins, and a bloodthirsty fox god.

Hale Appleman and Brittany Curran have some musical chops as they both sounded pretty darn good during their solos and as well as the harmonization of Curran and Summer Bishil. Appleman is definitely no stranger to the stage having performed in The Last Goodbye in the role of Mercutio.

The Magicians continues to prove that it’s a show with a dark sense of humor that isn’t afraid to get a little crazy time and time again.