This week on Supergirl: M’gann’s ex-husband shows up and causes a stir; the SuperFriends play a bad game of Clue at the DEO; Alex likes the Barenaked Ladies?

You know what I love? When a TV show ends on a cliffhanger and then immediately addresses that issue the next episode. Last week in “We Can Be Heroes,” M’gann mentioned that the White Martians had found her and were intent on killing the traitor. And then, boom. There they are in the next episode, causing mayhem and infiltrating the DEO. Good times. Because let’s be honest: Supergirl hasn’t exactly been the best at staying on topic this season. Alex has completely forgotten about rescuing her dad from Cadmus; Mon-El has had stalkers on his behind for like eight episodes now; the president is dominator or some other shapeshifter; and where the fuck is Lena?!

“The Martian Chronicles” was a more linear affair, probably the most streamlined episode we’ve seen in Supergirl’s second season. For that, I am thankful, because I was getting real tired of trying to care about Guardian and Mon-El’s feelings inbetween actual storylines.

Supergirl didn’t completely ignore Mon-El’s emotions, but instead book-ended the episode with them, which, if I’m honest, I can stomach. If I’m forced to sit through the chemistry-less pairing, it’s best if we only get Kara and Mike in short bursts. Kara, the adorkable cupcake that she is, tries her best to let Mon-El down easy but instead ends up telling him, “It’s not your job, it’s the way you are.” We are know that Kara means that Mon-El is kind of a selfish sleazeball, but Mon-El (understandably) is hurt by this comment and goes to douse his wounds in club soda. 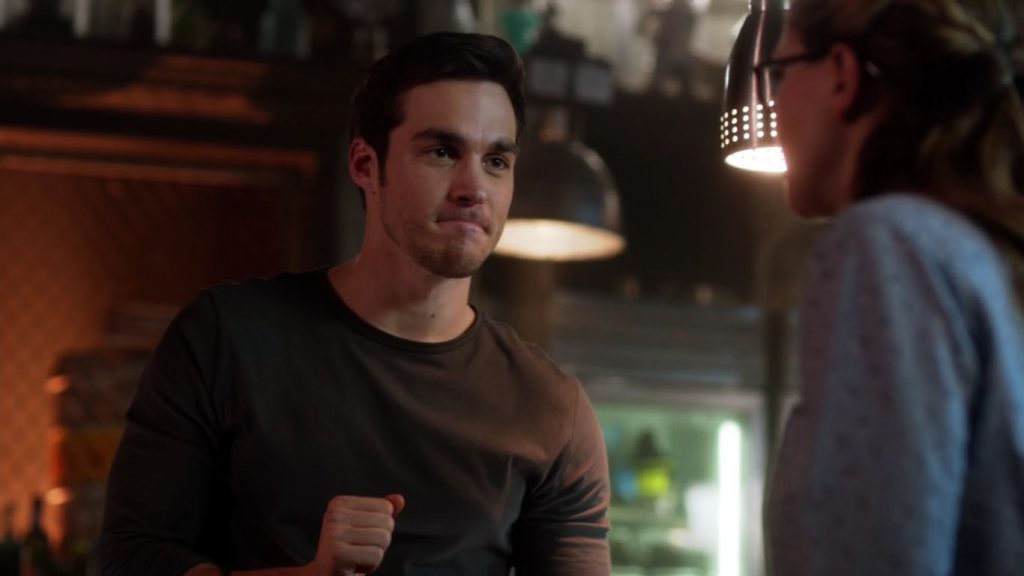 No, but seriously, he’s drinking her drink? Am I supposed to find that endearing? Be your own man, Mike! Copying Kara’s preppy dress style, her glasses, and her taste in drinks is just downright creepy. In the end, though, Mon-El tries to move on from his Kara Infatuation and goes back to dating Miss Teschmacher. Kara gets all flabbergasted by this turn of events because she was about to confess feelings for him, but this is the CW and they’re recycling romantic plot lines from last season. Also, did they just GUILT TRIP Kara into liking Mon-El? I’m not okay with this.

Kara, baby. Don’t you fret, girlfriend. Lena is in next week’s episode.

When M’gann warned last week that the White Martians were coming to kill her, I figured they’d send in an entire army. They don’t exactly seem like the type to be concerned about innocent casualties and if they accidentally conquer a planet in the interim, so be it. Instead, after losing the element of surprise, the Martians send in M’gann’s ex-husband? Obviously there’s no love lost between these two, what with M’gann trying to kill him before she left, but…why? To create more tension between M’gann and J’onn? Because I don’t know what show y’all have been watching but there’s already a spaceship-load of tension between those two.

AND I DIDN’T GET A KISS SO I’M A WEE BIT BITTER.

M’gann blows off ex-homeboy but he ain’t about to be denied so he follows her back to the DEO and begins the process of snatching bodies. I’ve said it before and I’ll say it again: all of the DC superhero bases on the CW have ATROCIOUS security. You would think after all the times that the DEO has been infiltrated by aliens that they would have instituted better protocol by now. At the very least, their motion sensors would also detect, oh, I don’t know, different body temperatures or something. I’m not a fake scientist. But the fact that the DEO’s best bet in determining who is and who is not a White Martian is a GODDAMN BUNSEN BURNER, maybe it’s time to reevaluate their security.

You know who IS creating such technology? MOTHER-EFFING LENA LUTHOR. 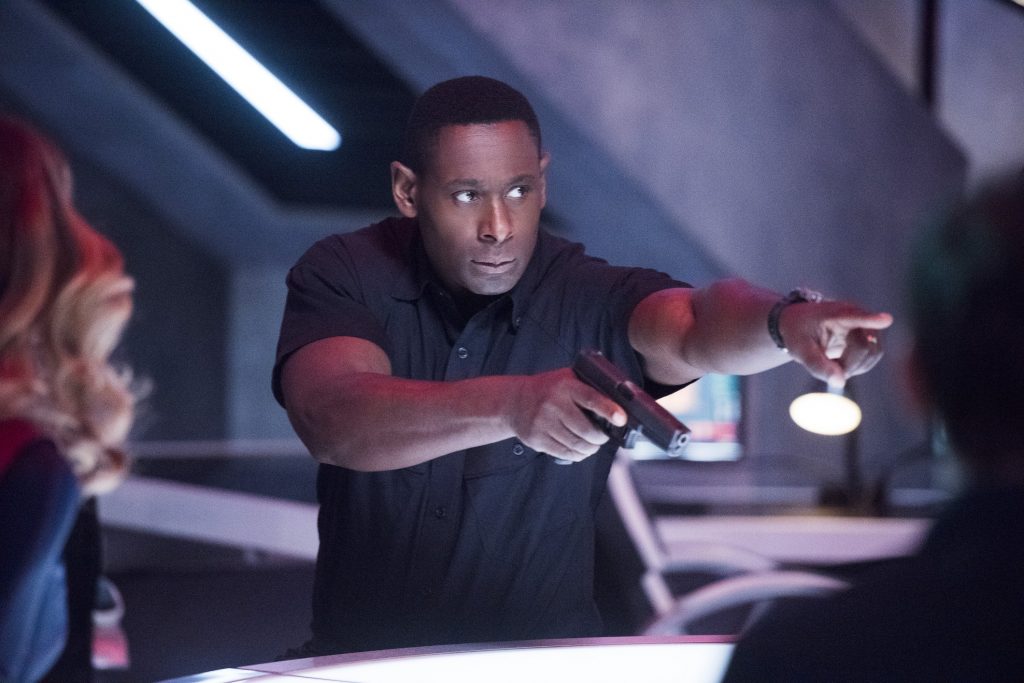 The SuperFriends play a rousing game of Clue with their White Martian enemies, but it’s the quickest game ever when they realize the culprit was Winn, in the hallway, with the seaweed goo. Of course, after a poorly timed heart to heart between the Danvers sisters, J’onn informs Kara that there are two White Martians and Alex is the second one.

Now, I’m always up for some sweet discussions between the sisters. And even though Alex was all body snatched, the scene where she tried to signal to Kara to check around the corner was ADORABLE.

How-to-the-ever, why are they slowly searching the DEO when they are on a 15-minute time crunch? Did Supergirl forget that she’s FASTER THAN BARRY ALLEN? I know we’re all about suspending some belief in superhero shows, but let’s not dumb down Supergirl’s powers for the sake of tension. Instead, maybe have the Martian Winn put on a kryptonite power dampener that Supergirl has to fight through. SOMETHING other than “oh yea, I forgot I’m super fast.”

A pretty cool fight sequence emerges between SuperFriends and the White Martians and I gotta say: Alex and Winn were definitely having fun being bad guys. The fact that both of them were evil together only solidifies them as my BROTP.

M’gann gets a kick ass finishing move against ex-douchebag and once again, evil is thwarted. But M’gann isn’t new to the ways of the White Martians and she knows they’ll keep sending bodies after her until she’s dead, so she decides to head back to Mars to recruit sympathetic White Martians. I’m still wondering why they haven’t sent an army to Earth, especially since they now know she and J’onn are working together, but I’m trying to suspend belief here.

If my knowledge of Martian customs in Supergirl are correct, J’onn and M’gann have sex on the balcony before a final tearful goodbye. I hope this isn’t the last of these two because now that means the CW is going to really drive home the Kara/Mon-El romance and I don’t think I can handle that. Also, J’onn and M’gann are insanely cute together.

Kara and Alex had a tiny falling out this episode, not because Kara was upset about Alex spending time with Maggie or even missing her Earth birthday, but because Kara is lonely. And it’s this loneliness, in my opinion, that leads her to think she has feelings for Mon-El. Is this the rambling of a girl hell bent on stopping the Karamel ship? Probably. But let’s look at the evidence anyway.

This season Kara finally spent quality time with her cousin, Clark, only to lose him. Cat Grant left Catco and in doing so, left Kara without the “no bullshit” advisor she so desperately needs. James and Winn are off doing their own “hero” thing, beating up thugs and the like after dark. And Alex is finally giving herself some much needed time to grow (and doing so with Maggie’s help). The only person who has been consistently around Kara is….Mon-El. Things were *okay* for her when they were just friends, but now that he’s admitted feelings for her, she knows that without her own emotions in the mix, he’ll pull away, and she’ll be lonely again.

But it’s okay, Kara because Lena is back next week, and she’s already admitted she doesn’t have any soooooo ALL BOARD S.S. SUPERCORP. TOOT TOOT.

I love them. I can’t wait for the Valentine’s Day episode. 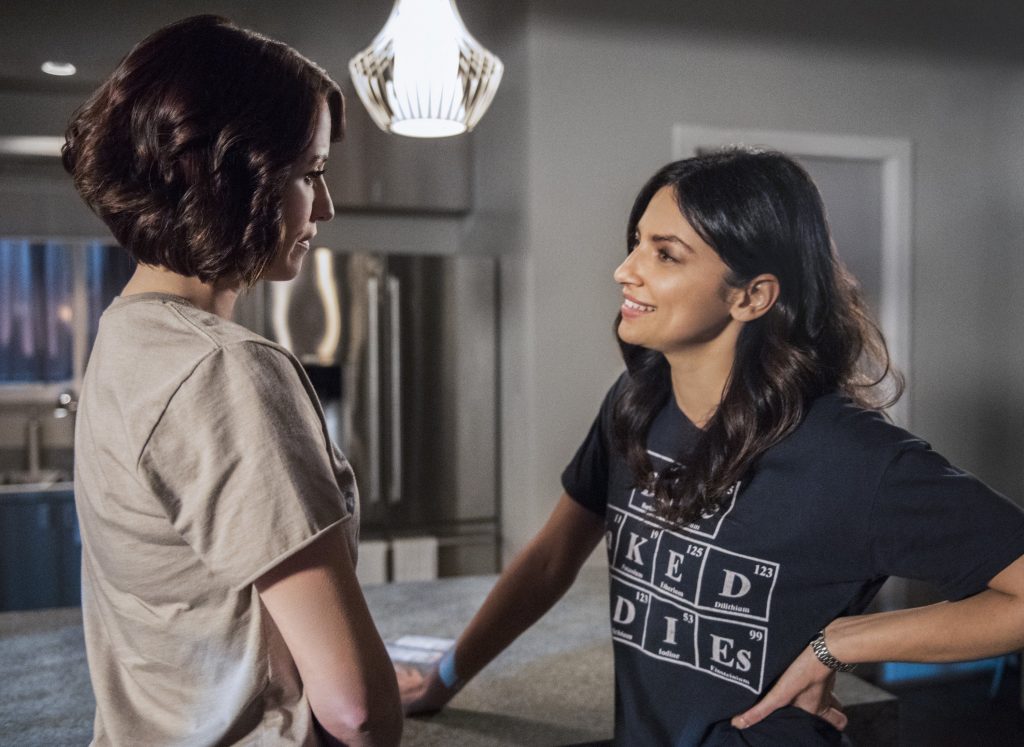 @theworkprint
Follow
Previous article
‘The 100’ Returns: All Hail Octavia kom Trikru
Next article
‘Shadowhunters’: We Meet The Iron Sisters and They Are Fierce