‘Shadowhunters’: We Meet The Iron Sisters and They Are Fierce

In this week’s episode of Shadowhunters, we meet the female counterparts to the Silent Brothers, the mysterious Iron Sisters. While the brothers are scholars and medics, the sisters are warriors and weapon makers of the nephilim.

After recovering from her demonic wound in part from the yin fen that Aldertree (Nick Sagar) gave her, Isabelle (Emeraude Toubia) asks the Institute head if Clary (Katherine McNamara) can accompany her to the Adamant Citadel to visit the Iron Sisters. Clary had wanted to go so that she could be doing something to help stop Valentine (Alan Van Sprang) instead of wallowing in her grief. Aldertree agrees only if Isabelle reports back to him everything that the other Shadowhunter says. The guy strongly suspects Clary and Jace (Dominic Sherwood) of being up to something because they are Valentine’s children. He is also preying on Izzy’s growing addiction to yin fen, which he likely provided in order to control her.

The two ladies take a portal to the Citadel, the remote location where the sisters live in solitude forging adamas into Shadowhunter weapons. Clary and Izzy are soon encircled by the white-robed women wielding wicked sharp blades and are asked to state their names. Izzy says hers followed by Clary calling herself Clary Fairchild (instead of Fray) and this may be the first time she’s claimed her mother’s Shadowhunter family name. They recognize her as Valentine’s daughter though and are immediately mistrustful. 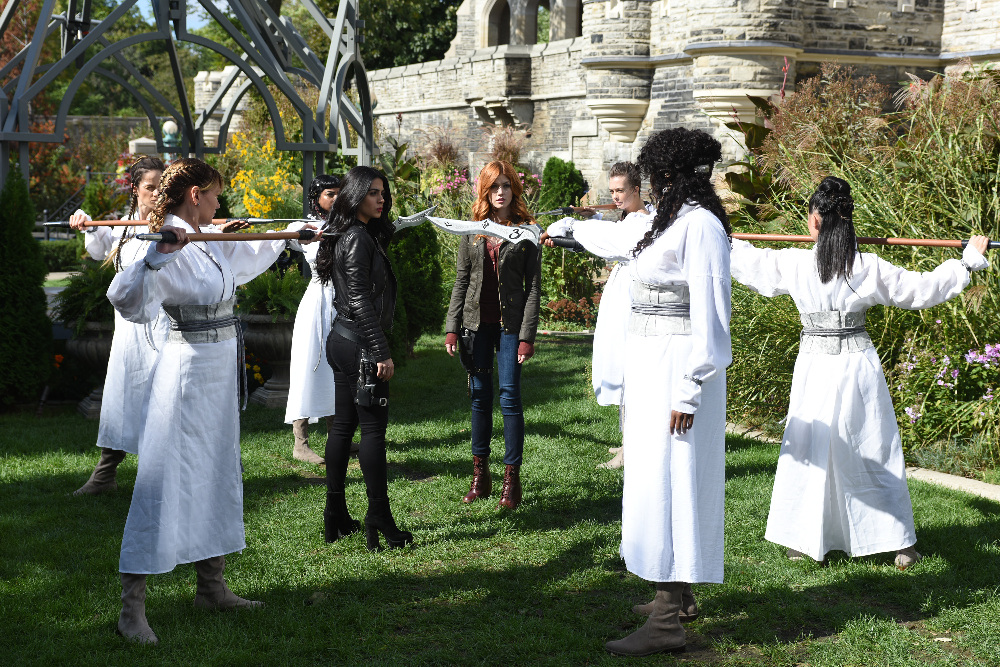 Clary protests that she wants to defeat her father more than anyone else because he’s the reason why her mother is dead and he also experimented on her brother. The two senior Iron Sisters, Sister Mag (Farah Merani) and Cleophas (Lisa Berry) eventually agree to let them be tested before entering the Citadel. There is a purity test that will detect if any Shadowhunter has been tainted with demon impurities. Anyone who is found unclean will not be able to enter the Citadel because it would cause issues with how the adamas is shaped and forged.

Understanding that the sisters are afraid that she has demon blood like Jace, Clary goes into the pool first where she passes the test. Izzy goes next and because if the yin fen in her system, the pool turns black and she nearly drowns. Sister Mag says that she cannot enter unfortunately but Izzy says that Clary needs to go and get the information that they need without her. They are there to find out why Valentine took the soul sword. The sister tells Isabelle that yin fen is made from vampire’s venom and that it cannot actually heal her wound. The younger Shadowhunter is shocked and realizes that Aldertree was not giving it to her out of the kindness of his heart.

We find out in the meantime that Cleophas is actually one of Luke’s (Isaiah Mustafa) sisters along with Amatis who is still in Idris. After her brother was bitten and turned into a downworlder, she chose to become and Iron Sister to bring honor back to their family. This is actually a big departure from the book series as Cleophas was actually Amatis and Luke’s mother. We first met her character in the City of Lost Souls when Jocelyn and Isabelle visited trying to make sense of a note from Magnus about Jace’s disappearance. 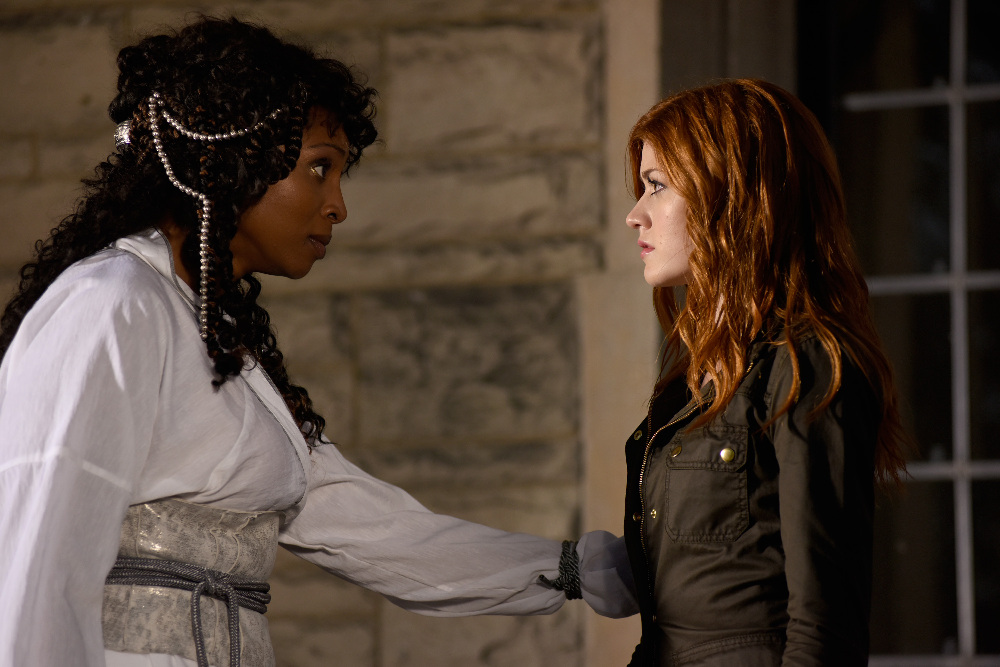 In Shadowhunters, Cleophas reveals to Clary inside the Citadel that the soul sword’s secondary function was a weapon of mass destruction. If demons were to overrun the earth, the sword could be powered with angelic energy and would wipe out all demonic blooded entities in the world including all downworlders. Cleophas tells Clary that there is no way to stop it once it is activated and so they must stop Valentine before it happens. In addition she cannot make this knowledge known because it would cause panic and chaos with downworlders rebelling against the Clave.

Despite Jace’s warning, Clary reveals to Cleophas that a rune had manifested itself before her eyes and she wondered if it could have been her mom communicating with her. The Iron Sister asks to see the rune and so Clary uses her stele and draws it. Instantly a beam of light bursts from her hand, though Luke’s sister says that it can’t be from her mother. But the older woman doesn’t know either where the rune had come from (it’s not in the Gray Book, the book where the angel Raziel inscribed marks that Shadowhunters were able to use). Nearby, Izzy is eavesdropping on the conversation, though thankfully she does not report it to Aldertree.

However the most shocking revelation was when Cleophas is seen leaving the Citadel. Mag tries to stop her, saying that she thought the other Shadowhunter had left that life behind. Cleophas then stabs her sister in the gut, uses her stele against her neck and reveals the mark of the Circle. Oh damn she was another one of Valentine’s minions. So the question is, is she leaving to stop Val from activating the soul sword to protect her brother? Or is she leaving to rejoin her former comrades? 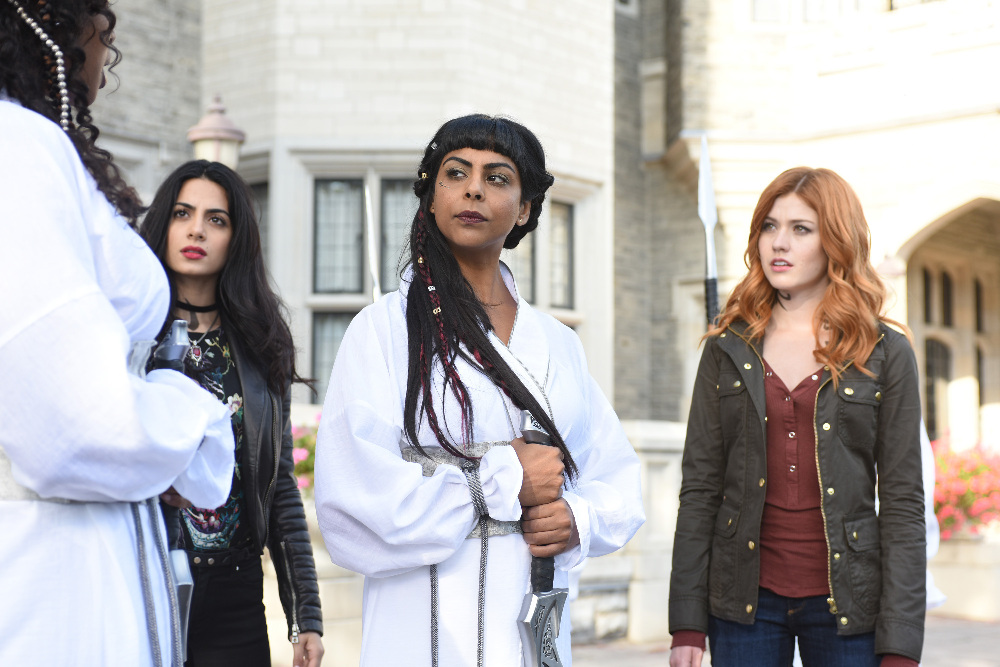 It is such a pleasure to see the Iron Sisters come to life on screen. The order was founded by Abigail Shadowhunter, the elder sister of Jonathan, who was the first nephilim. When she grew too old to fight demons, she turned to study the esoteric parts of the Gray Book and also began to forge adamas beneath Idris to become the first Iron Sister. Like the Silent Brothers, they are immortal having been given sacred marks that enable them to do their work. However, one would also have to give up ties to their friends, family, parabatai and live in seclusion. Apart from making Shadowhunter weapons, they also make witchlights and also confer a protection spell on newborn nephilim along with a Silent Brother counterpart.

The Iron Sisters add another fascinating layer to the shadow world and to the overall story of the nephilim. I for one cannot wait to see more from their order and what Sister Cleophas has planned. Only time will tell if she is a friend of foe!

Previous article
‘Supergirl’ Review: Mars Attacks in “The Martian Chronicles”
Next article
We Almost Had To Burn Down ‘Legends of Tomorrow’ After “Turncoat”