The week on the season premiere of The 100: Clarke tells Bellamy the truth about their “victory” against ALIE; Octavia is badass.

Spoilers through The 100 season four, episode one: “Echoes.”

All seemed well for Clarke and Co. at the end of season three. With Raven’s help in Arkadia and a surprise visit by Lexa, Clarke managed to shut down ALIE and her hold over most the earth’s population. However, the act came at a cost. After solving one major disaster, ALIE informed Clarke of another dire issue: the meltdown of the world’s nuclear facilities.

That’s the position Clarke’s in when the season four premiere opens. With only six months left to try to save the world, Clarke wastes no time in telling Bellamy the truth. They then, in turn, tell Papa Kane and Abby, as well as Roan and Raven, who gets to working on saving the world ASAP because that’s just how Raven rolls. Thank the gods Clarke and Bellamy spilled the beans early because I’m so over the whole “I’m keeping a secret to try to save you” bullshit. Season three suffered not because of Bellamy or Pike, but because no one told the damn truth. And that nonsense with Lexa, which we’ll get into shortly. But first! The biggest divider of the season four premiere of The 100:

I’ve said it so many times that it’s almost become my motto where The 100 is concerned: as Clarke and Bellamy go, so does Skaikru. With the two pillars of Skaikru finally united (and seemingly for a good while now), things will be less dire for the space invaders. An odd sentiment, I know, given the whole “end of the world in six months” announcement, but Clarke and Bellamy’s unspoken connection brings a calm to the rest of the group, allowing the others (ahem, Raven) to perform at their best. They trust one another implicitly, a bond unlike anyone else on the show. 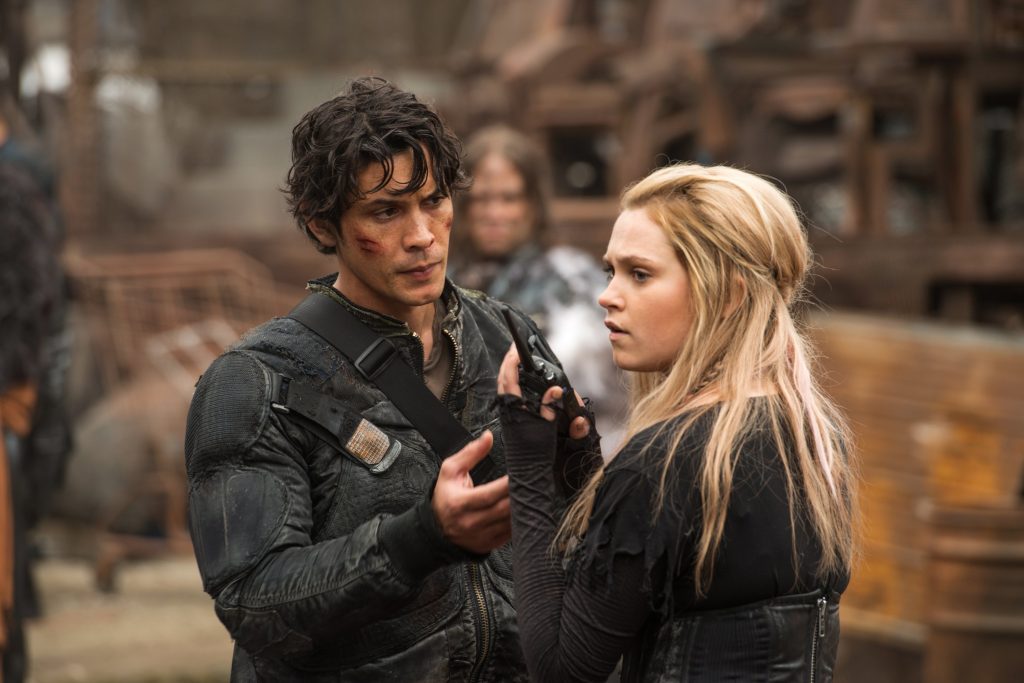 But there’s a darkness in this partnership that concerns me: romance. I’ve never wanted Clarke and Bellamy to be romantically involved. That much is clear all over The Workprint. I know that in the books on which the series is based, Clarke and Bellamy are the “end game” power couple, and I don’t fault anyone for shipping the two. I see the chemistry. But I don’t want them together because in wanting more diverse representation in our media, I also want more platonic relationships. So rarely on television and in movies are men and women ever just friends. If a man and woman work closely together, they must fall in love. But Clarke and Bellamy aren’t like that, in my mind. They never have been. They go beyond so much more than just romance.

And yes, before you ask, I am still really upset about Lexa. Really fucking upset. I loved her, too. (And I’m still bitter about Lincoln, while we’re at it.)

I’m so glad we finally got this scene with Clarke grieving over the loss of Lexa. I know there was no time for mourning and shit, what with ALIE taking over everything and peeing in everyone’s Cheerios, but damn, I have wanted Clarke, for so long, to show that she fucking cared for Lexa and I finally got it. Having watched the scene a few times now, the pan to Bellamy is intentional, and I’m really worried that The 100 is going to play up the whole “Bellamy loves Clarke” nonsense once again.

Look, I have no doubt in my mind that Clarke and Bellamy love one another. They’ve been to hell and back, lost loved ones, killed friends, and they’ve suffered immensely for all their decisions. But Clarke and Lexa were important not just to the fans, but to the characters, too. Clarke learned how to lead from Lexa. To cast aside that importance so soon for the sake of “canon end game romance” is insulting. What scares me even more is Clarke giving up her last connection to Lexa, the flame, to Roan for the sake of her people. The Azgeda king takes the flame to preserve his own leadership and attempt to reunite the Coalition, all the while Clarke sheds a single tear, a final goodbye to her love.

And while I shed a tear along with Clarke, it feels a lot like The 100 is trying to get us (and Clarke) to move the fuck on from Lexa and all I have to say about that is:

Also, I’m still not okay with how she died, especially since Ice Jesus laid there for how long with a bullet in his chest but Lexa died almost immediately.

Two things The 100 wanted us to learn about this episode: 1. Bellarke is almost definitely happening and 2. ECHO HAS NO DAMN CHILL. This Azgeda spy came into Polis like a wrecking ball. All she wanted was Wanheda’s heart.

But seriously, The 100 needs more Echo. Echo is an unpredictable player, one who is loyal to herself above all others. She could spell disaster for Roan and Skaikru OR she could find the answer to all their problems. It’s a coin flip. That makes her exciting. Besides, I will take all the badass women I can get. 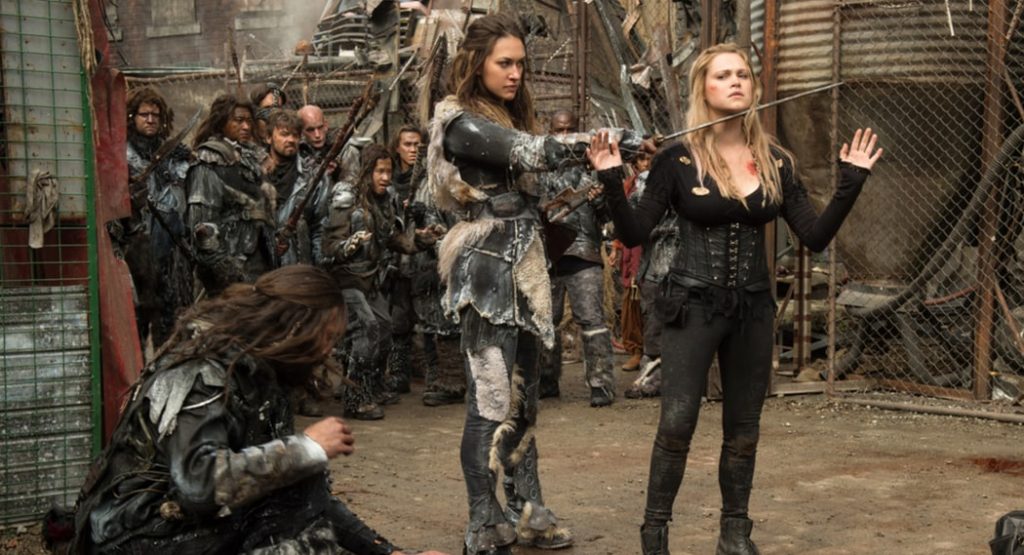 Last season The 100 struggled in the early episodes because they couldn’t find their footing in the plot. The characters had to reconcile which enemy to face, Grounders and the Coalition or ALIE, which made for some confusing character decisions. It took them through Lexa AND Lincoln’s deaths to finally get it together and get the ball rolling into a cohesive storyline. It looks like in season four, they aren’t messing around with who the enemy really is. One episode of “maybe Azgeda” as an enemy and then BOOM. Radiation.

The 100 is criticized for often being too dark, not letting the characters embrace the few enjoyable moments they get, and I suspect we’ll see more of that lightness this season, even with the stakes so high.

I don’t have any deep, interesting thoughts regarding Octavia in the season premiere, I just wanted to dedicate a section to her and her badassery. After she killed Pike in the finale, I was worried that Indra might be upset with our Skairipa, but thankfully, she understood, and now they’re best friends again.

Octavia is the soldier that Skaikru needs right now, but I have a feeling she’s not going to be around much longer. Skaikru has always treated her as an outsider, whereas the Grounders made her feel wanted, important. And now, without Lincoln, she has no one keeping her tied to Arkadia. I wouldn’t be surprised if our little warpaint hero went off on her own to do some business.

Jasper has has a rough go of things since they landed on earth and his suicidal nature is unbelievably heartbreaking to watch. I’m actually glad that The 100 hasn’t gone with a “shocking” end and killed him yet because at this point, that almost seems easier than letting him live. It’s hard to watch Jasper as he struggles with his own emotions. He was safe in Mount Weather. Happy. And Clarke and Bellamy ended that. He was safe in the City of Light and once again, Clarke stole that from him. I don’t begrudge him hating Clarke, but it is a nice change of pace to watch him shift from defeated to almost…elated at the apocalyptic news. Finally, to Jasper, the humans will get what they deserve, and he’s relieved he doesn’t have to pull the trigger.

I’m also gonna need more scenes with him and Monty being best buds. For science.

I’m so glad Kane and Indra were reunited. They’re my 100 BROTP.

I’m keeping my eye on Raven and her newfound computer knowledge. I’d hate to see her become a villain again, but The 100 likes to make me angry.

Also, I know they’ve only had like 30 seconds of screen time together, but I secretly want Raven and Octavia to be the new power couple.

Does the “youth shall inherit the earth” moment at the end mean that we aren’t going to see much of Papa Kane and Abby? I don’t know if I’m okay with this development.

I think Bellamy knew that Murphy was going to run off with the gun, but he gave it to him anyway.

Jaha needs to die. I’m sorry, but he’s irredeemable in my eyes. Cut him and move on.