‘Supergirl’: Let’s Analyze All the Gay Pairings in “Survivors”

This week on Supergirl, Hank confronts M’gann about being a Martian and–You know what? I can’t do this. If y’all think I’m talking about anything on Supergirl that isn’t related to Alex and Maggie for the next few weeks, you might want to walk on by. Oh sure, I have to “review” the episode because I’m a “professional”, but after “Survivors” and all the emotions fluttering through my chest right now, I need to talk about it, so strap in, because we’re about to get very, very gay up in here.

I can’t be the only one who noticed all the potential gay pairings, right? After last week’s episode, “Welcome to Earth,” the internet (ahem, me) was all but certain that Alex was the “rumored to be gay” character. With her actions this week in “Survivors,” that’s clearly true. However, before we dine on the main course, let’s discuss a few of the appetizers.

I mentioned in last week’s review that Kara and Lena were sending some strong vibes out into the air and this week when Kara came to the L Corp’s CEO for help with the underground alien fight club, Lena couldn’t wait to help her. I could be misreading these signals. It’s possible that Lena is clued in to Kara’s secret identity because Kara Danvers is a terrible, no good, very bad liar. Lena doesn’t seem the “stupid” type, so I’m going to guess in reality it’s the latter option, but sometimes it is nice to daydream that Alex has always been gay/bi and Kara will be the one exploring her sexuality. Or maybe Lena just looks at everyone like that. I don’t judge. However, next week sees the two of them paired up yet again so I’ll guess we’ll start to understand their relationship more fairly soon. 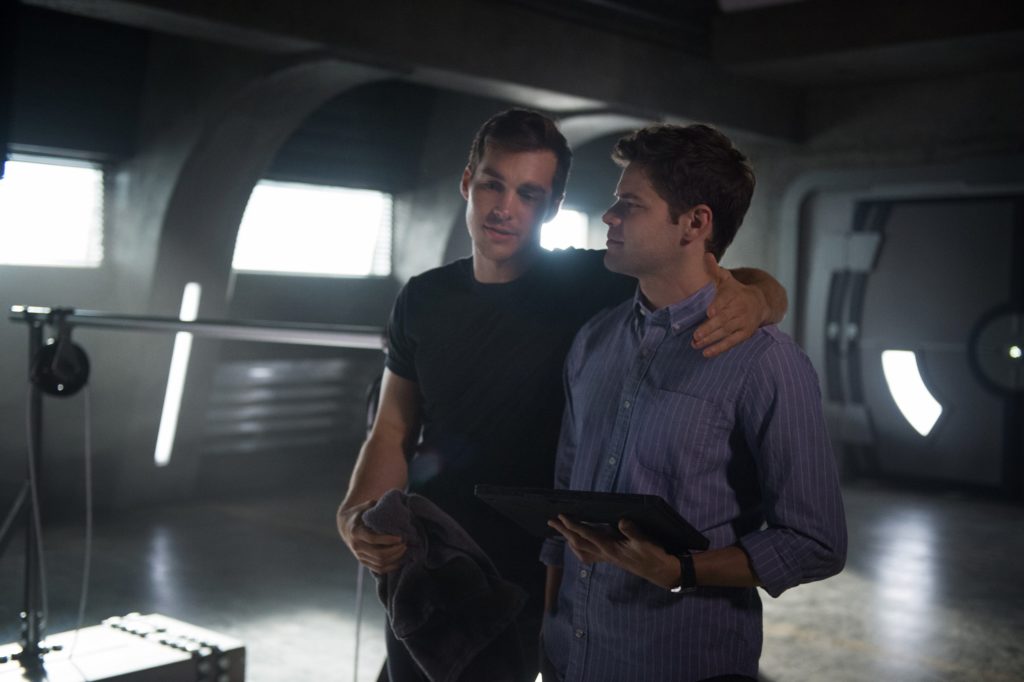 Next up on the menu are Winn and Mon-El. Now, before the season started, Winn was the frontrunner for “possibly gay character” on the show. Is it because Jeremy Jordan sings Celine Dion like an angel? Is it because he isn’t as “masculine” as James? Or because he dresses to impress? Shame on you, internet, for stereotyping!

After Winn’s banter with Mon-El during “training,” however, I’m not so sure that he’s not at least in the “maybe” category. We’ve already watched him swoon over Superman and who can blame Winn where Mon-El is concerned? Mon-El OOZES Ryan Gosling-like charm. And who better to teach Mon-El about the ways of Earth other than Winn? Sure, it’s clear that the show wants to go the whole Romeo & Juliet route with Kara and Mon-El, but after their night at the bar together, I assure you, many a fanfiction will be dedicated to these two dudes.

I can’t believe I showed some measure of restraint and wrote about something other than Alex and Maggie. Between the glances, the phone calls, and the banter, there’s no way Supergirl isn’t giving us the slow burn with “Sanvers”. Despite my desperate hope for them to kiss like crazy, they still have to work with one another, be professional, and definitely not smile when they call one another. Maggie initiates contact by asking Alex if she wants to see a dead body and you know damn well that if anyone else had called to ask that question, Alex would have reached through the phone and kicked them in the throat. But Maggie shows up with a dead alien in a trunk, a link to an alien fight club, and an invitation to a kinky masquerade party and Alex cannot wait to put on that dress.

AND THEN MAGGIE TAKES HER HAND AND I DIED. INTERTWINED FINGERS, Y’ALL. BE STILL, MY HEART.

I’m getting ahead of myself. Let’s all take a moment of silence and marvel at Chyler Leigh’s phenomenal acting in these moments. Look at her face when Maggie takes her hand. LOOK AT IT. Alex is a character who has traditionally been stoic, professional, and most importantly, in charge of her emotions. Maggie came along with her confidence and flirtatious attitude and Alex turned into a puddle. Alex Danvers, the woman who charges into danger without hesitation, can’t form a coherent sentence when a pretty girl compliments her. Watching Alex try to compliment Maggie’s dress without completely outing herself was the highlight of the episode for me. She was so awkward in her “I’m flirting but totally not flirting” demeanor.

Alex: “I’m not all business. But this is…right?”

Alex, you adorable cheesecake. She WANTED it to be a date. She WANTED Maggie to hit on her. But, Alex is still a professional, an agent for the DEO. No matter what her growing feelings mean, she knows she still has a job to do and it’s Alex who does most of the leg work in the episode. Sure, Kara lands the final blow on Draga, but Alex (with Maggie’s help) is the one who got them to that point. She’s the one advancing most of the alien plot while Kara only swoops in for the victory.

After they bust Roulette (and then have to let her go because I’m 99% sure Cadmus is behind the fight club and they need Roulette as a baddie for a few more episodes), Alex, in her very own “Alex way” tells Maggie that she thinks she’s “a great cop.” I don’t know if y’all have been following Supergirl or not, but Alex doesn’t compliment many people. Her list of people she cares about is as follows: Kara and J’onn. That’s about it. Maybe mom and dad. Maybe. By telling Maggie she thinks she’s a great cop, she’s basically saying, “I like you, please kiss me.” But the blow came when Maggie introduced her girlfriend and Alex’s response was one that was so painstakingly familiar, it killed me.

But I’ll be honest: I’m glad about this turn of events. So often with gay romances, the pairing happens so quickly that I don’t trust it. Much like with Waverly and Nicole on Wynonna Earp, I WANT the slow burn for Alex and Maggie. I want them to earn it so that when we finally do get it, we get all of it. I want to see Alex struggle with her emotions; I want to see her tread unfamiliar ground; I want to see her awkward and uncomfortable. Goodness, I’m so excited. Please don’t hurt my baby, CW.

At the end of last week, I shrieked with glee at the sight of M’gann. A million thoughts raced through my head about where they could possibly take her character. If they decided to use a more Young Justice-esque Miss Martian, she’d easily feel at home beside Supergirl. However, judging by J’onn’s interactions with the last daughter of Mars, it’s clear this version of M’gann is much more guarded and cynical. 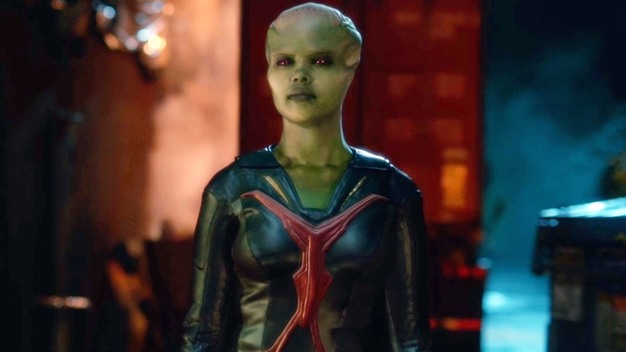 J’onn tries to break M’gann out of her shell, but he’s so excited by the prospect of another Martian, that he asks her to bond, completely oblivious to the fact that for 300 years M’gann has lived in hiding, has lived with the shame of surviving. Much like Kara and Mon-El, she has to cope with being one of the last of her kind and she guards that fact. J’onn is proud of who his people were and he desperately wants to open up the way he once had before his life was stolen from him. In M’gann he sees a hope for all of Green Martians, so when he learns about her actions in the alien fight club, he lashes out, causing even Kara to intervene.

J’onn: “I spoke with M’Gann last night”
Kara: “Did you use your inside voice?”

After J’onn and M’gann are pitted against one another in the fight club, they finally come to grips with their differences. J’onn accepts M’gann for who she is, someone who has had to struggle with solitude and guilt her entire life. She fights as her own form of penance.

Of course we learn in the final moments that M’gann isn’t a Green Martian, but in fact the feared White Martian. How J’onn handles this turn of events will be interesting but I want to talk about these implications for a moment because I’m not sure TV fans understand how difficult such a transition is for M’gann. In the one episode we’ve seen her character, M’gann hasn’t been portrayed as too likable, definitely not like the bubbly Megan on Young Justice. However, it should be understood that the White Martian she mentioned in her story is her. She’s the one who broke from tradition, probably saving a Green Martian from certain death (maybe even J’onn?) and is punishing herself for her entire race’s sins. She won’t bond with J’onn because then he’ll know the truth about her, something she isn’t ready to share yet. By introducing M’gann as a White Martian so soon, Supergirl continues to blur the lines of good and evil by showing us that not everyone adheres to stereotypes.

Also, I’m getting a romantic vibe from J’onn/M’gann and while I desperately want romance for him, I don’t know if I’m comfortable with that, considering I’ve known M’gann predominantly as “Martian Manhunter’s niece.”

Kara’s “reporter” storyline is “meh” at best. Sure, it gives us more interaction with Lena Luthor, but I cannot help but think it would be so much better with Cat there as her antagonist. Snapper isn’t awful, but I really miss Cat.

Kara telling her mother about her day is really fucking sweet. It’s those little moments that show the heart behind the characters that really get to me. Also, Mon-El is helping to shed some grey light on the always pure Kryptonian Kara.

Alex and Winn are my favorite friendship to come from Supergirl’s move to The CW:

I know this is probably a nitpicky thing, but after all the hubbub from last week’s episode announcing “rights for aliens,” can Roulette really say that “They’re not people. They have no rights.”? Maybe the laws haven’t gone into effect yet, but I can’t imagine no one cares about aliens fighting illegally underground.

Kara, baby, we need to discuss some of your cringe-worthy dialogue:

Draga: “I’ve never killed a Kryptonian.”
Kara: “Your streak’s about to continue.”