This week on Supergirl: So many new faces that my live-action Young Justice might become a reality and ALEX & MAGGIE 4EVER.

OH BUDDY. I don’t know how I’m supposed to compose my thoughts after an episode like “Welcome to Earth.” Supergirl is already the best of the DC shows on the CW. Now, the other shows have some serious catching up to do. Not only did Lynda Carter (Wonder Woman!) appear as the president of the United States, but we also finally met Mon-El (the man in the pod) as well as the new face I’m most excited for: MISS MARTIAN.

The president visits National City because she’s signing into law a piece of legislation that would allow aliens to become U.S. citizens. On the surface, it’s a fairly common staple among comic book storylines: a law that would “out” aliens/superheroes/mutants/inhumans to the human population under the guise of giving them freedom. Not all aliens are a fan of this move and one such alien, Scorcher (not named by Cisco, clearly), decides to take up her issues with the president directly. 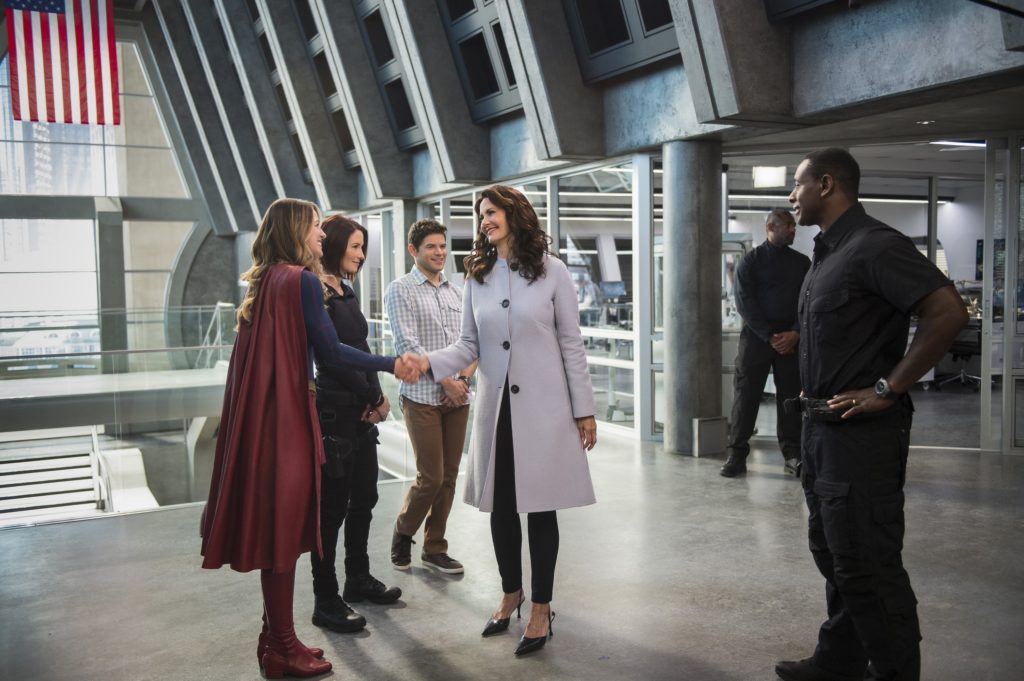 As far as villains of the week go, Scorcher is pretty mundane. It’s how the team go to facing her that was exciting. Kara, for all her saving the day, is positively anxious with it comes to the prospect of meeting the president. Her reaction is how I imagine most of us would feel upon learning we were about to meet the Obamas. Melissa Benoist shines the brightest when she is cast in a heavy “adorkable” light. It’s a quality we love about her, even if does make her somewhat oblivious to certain dangers, like the possibility of the president not being who she seems. (A dominator in preparation for the “Invasion!” crossover?!)

Just an aside: I know that we’re supposed to be all “boo L Corp technology” but I think it would behoove the DE-freaking-O to have some of kind technology that detected an alien. Even if it’s just a silent alarm. At this point, they seem more lax with security than STAR Labs (though not quite as atrocious as the Arrow Cave). They let random NCPD detectives in for routine treatment like it’s Urgent Care. Nearly every politician has been an alien. Come on, J’onn, be a teensy more paranoid.

Everyone has already complained about Mon-El using a clearly Kryptonian name to introduce himself; I won’t tread old ground. (However, I would like an explanation, CW.) Chris Wood, as Mon-El, is, in my opinion, much more likable than even Hoechlin as Superman. He’s got that “I want to be a bad boy who doesn’t care but really I have a heart of gold” thing down pat. Clearly, he’s a case of wrong place, wrong time, and Kara, shockingly has a bias against his “kind”, which comes into play into a huge way over the course of the episode. 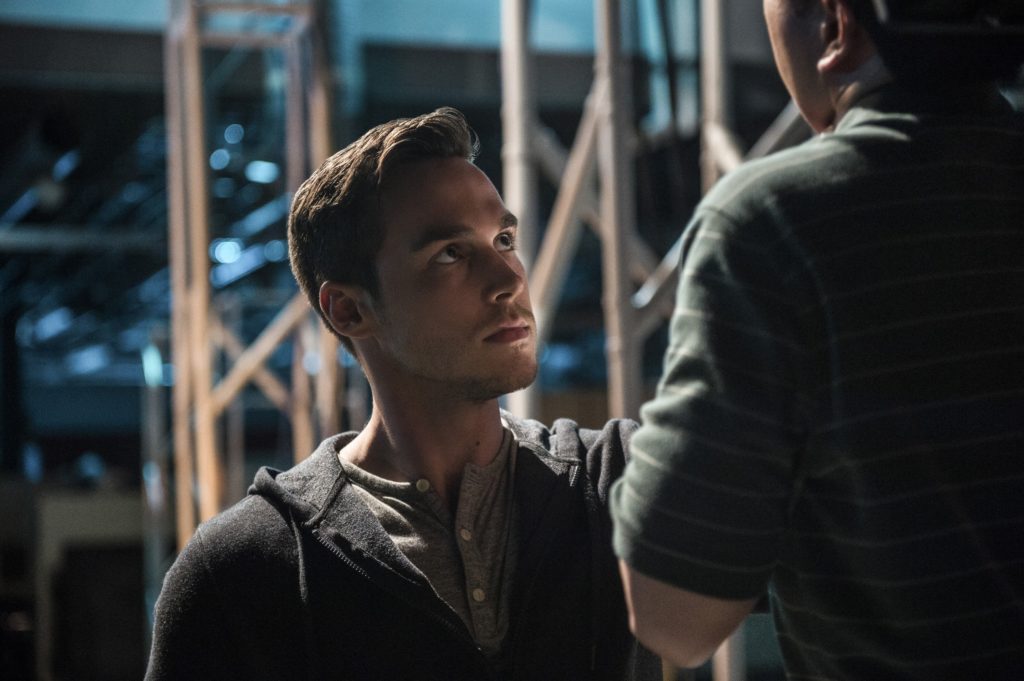 Mon-El isn’t Kryptonian, not like they initially thought. And for someone who so deeply hates Daxamites like the Kryptonians do, you’d think that Kara would have recognized him as an “other” beforehand. Maybe that’s where the irony for Kara’s hatred and snap judgment comes in. She was willing to be accepting for a man who was her “own”, but once she learned he was from the Montague house, all hell broke loose.

After realizing that she was too rash, Kara apologizes to Mon-El for being kind of an asshole and making irrational decisions where a Daxamite is concerned. She conceded that he wasn’t as bad as originally intended and even though his radio attempt to Daxam is probably going to bring hell down on National City (I watch a lot of Sci-Fi, I can read the signs), he isn’t some evil, kill everything, kind of person. Daxamite. I don’t know the terminology.

ALEX &  MAGGIE SITTING IN A TREE

Nothing about these two is subtle. TV outlets are reporting that there’s a hint of romance brewing between Alex and Maggie, and guys, I just have to know, were we watching different shows? Because let me recap what I saw with my two gayballs in my head:

There’s no way these two aren’t hooking up, and I, for one, couldn’t be happier unless Sara Lance made her way to National City to have sex with errrybody.

Maggie Sawyer is a detective for the NCPD and she shows up wearing black almost as well as Alex, ruffles a few feathers, takes Alex to an alien dive bar, and then divulges her quick and dirty background. I don’t know about you, but if I were Alex, I might feel like that was a date. Maggie gets personal, but never to the point where she feels out of control, because she’s not that kind of gal. )And can I just say how great it was that both Maggie and the show were nonchalant about Maggie’s sexuality?) The pair bond over a good cop/bad cop interrogation, like the badasses that they are. Alex is still kind of a baby gay, at least to the viewers. She’s not quite a unicorn like Waverly Earp, but not Sara Lance, either. She’s into Maggie, but Maggie knows how to drive the ladies crazy. She plays it cool and casual by letting Alex save her and then rides off on her motorcycle to another date. Boom. Sploosh.

So much gay is about to happen on Supergirl, ladies and gents.

Also in the realm of gayness, was Lena Luthor hitting on Kara at the end? OH BABY. (I actually think no and that they’re playing up a potential Kara/Mon-El romance down the line.)

When J’onn made his first appearance last season, I lost my mind. J’onn Jones is a character who has had my heart for a long time in DC comics. He’s kind but powerful. Loving and unknowingly hilarious. (David Harewood is amazing as the character.) But better than J’onn is M’Gann, the last daughter of Mars. I read the spoiler over the summer that she was making an appearance on the show but I never dreamed it would actually happen. With all the heart and hope bursting forth from Supergirl, M’Gann should fit right in with her bubbly and quirky persona.

I appreciate the “Kara as a reporter” side story more than I’ve had more time to digest it, but when compared to everything else I’ve written about, it just falls to the side for me. I love that Snapper Carr actually cares about reporting news for news’ sake and isn’t just some old white dude we’re meant to hate.

I relate to Kara completely when she mentions that she can’t write neutrally about a subject she’s passionate about. Look at my post history. I’m the same.

James and Winn have kind of become stand-ins, right? I want more for the both of them, and maybe that time will come, but right now, they’re just drones, it seems like.