This weekend at New York Comic Con, The Workprint sat down with the voice actors behind two of our favorite characters on Steven Universe: Peridot (Shelby Rabara) and Ruby (Charlyne Yi).

Question: How long have you been doing voices on the show?

Rabara: Let’s see. I started in 2014. Towards the end of the first season is when you first see Peridot. I don’t know when Ruby came on.
Yi: Um a year and a half ago. And this was my first voice over job.
Rabara: Mine too!
Yi: And when I met you guys I was like “Oh no! You guys are gonna judge me. Oh god, you got to impress them. Gotta impress them.”
Rabara: No she did like eight different Ruby’s. It was a lot.
Yi: Yeah, I don’t know how many but I felt like a crazy person.
Interviewer: I think it was five.
Rabara: Yeah so she was killing it. She had to make five different Rubys all in one session. It was crazy.
Yi: But it’s like I’m talking to myself and you guys were watching me and I’m like “Why were they invited?!”
Rabara: Yeah I know. And I had to cover my mouth because I was giggling so much. I was like “ Oh, that is amazing!”

Question: Will Peridot have a solo song anytime soon?
Rabara: Hopefully, fingers crossed. We’ll have to tune in for that one. But I’d love to do a song, a solo song. I’d really like to rap.

Question: Can you freestyle?
Rabara: Freestyle right now? Oh, the pressure’s on. I don’t know, it’s been a long day.

Question: I love Steven Universe because I think we are taught that we have to adhere to certain gender norms and I think Steven Universe is not a boy show or a girl show but it’s for everyone. Are there any books you would recommend to SU fans who love that the show isn’t just for boys or just for girls or any books you have read that influenced your performance?
Rabara: One book that I really like is “Running with Scissors” and I think it talks about you know what it means to grow up and go through something and I think a lot of the themes in Steven Universe kind of relate to the same themes in like “Running with Scissors” or one of my favorite books “Catcher in the Rye” they’re coming of age stories. You know, I’ve had a lot of on the spectrum people come up to me and they’re just like “We just want to thank you for your representation of Peridot. And you know I’ve been asked if Peridot is on the spectrum and well I’m not going to really say yes or no but the fact that they can identify with a character like Peridot really makes me happy because obviously people really go through something, our viewership they go through really hard things and I think like books like “Catcher in the Rye” and “Running with Scissors”, young audience members or young adults can really identify with coping, whether it’s coming out of the closet or dealing with you know LGBTQ issues.

Question: So how did you keep Peridot’s sarcasm around as she was stripped from her machinery? How did you play that to make her vulnerable but keep her hard shell, is there a way you approached that?
Rabara: So I think of it kind of like my limb enhancers and my gravity connectors were my security blanket. Now that they’re gone she kind of uses what she doesn’t know as a crutch kind of.  Like when she pushes Greg off the roof she says [in Peridot’s voice] “Well how was I supposed to know?” to Garnett. But also she wouldn’t hurt a fly. She’s so harmless she just doesn’t know any better. I use it as my crutch not having my limb enhancers. I’m like [in Peridot’s voice] “I’m small. I’m the same size as Steven.”

Question: Do you have a favorite artwork that she did in her and Lapis’s barn?
Rabara: I like the toilets in the barn. That’s my favorite. 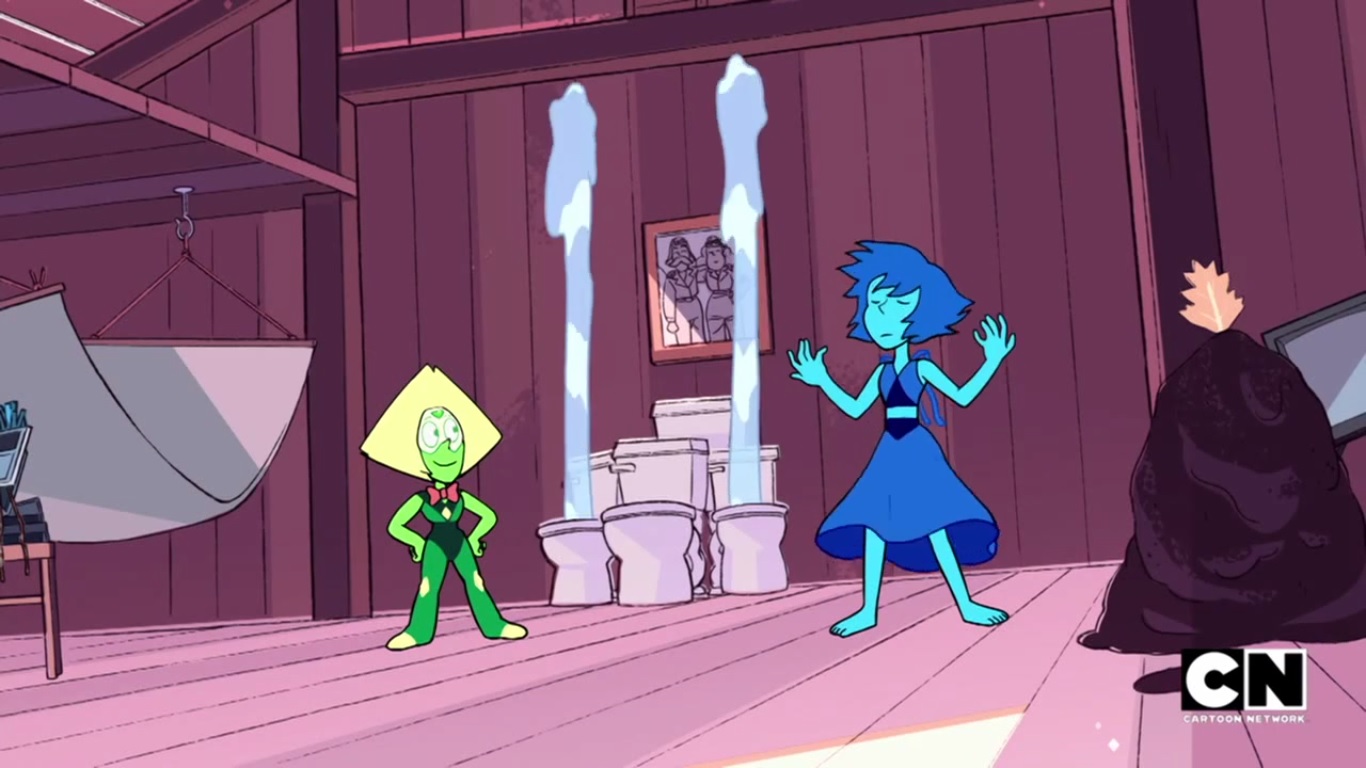 Question: So how do you identify with your characters? Are you a lot like them?
Rabara : Yeah, well, Shelby has a filter. I can censor myself a little bit better than Peridot does, but I do have to say I think I’m a lot like Peridot because she really just loves. She really just wants people to understand her and I want people to understand me as Shelby. So in that way, I’m the same as Peridot.
Yi: Um, I get angry a lot. I literally was telling Shelby how I said some of the lines the other day. I’m like “AT LEAST I FEEL SOMETHING” and I was like “Oh my god, I’m like Ruby!” And it’s been really nice to go into work and get all of that angst out. It’s like “Yeah I’m so much calmer now.” Also, I think people are like “Is Ruby a girl or a boy?” and I feel like I’ve definitely gotten that. They’re say to me“Go to the men’s restroom.” I’m like “I’M A GIRL!”

Question: So when Ruby comes out that means Garnett unfuses so do you ever not want to play her because that means there is conflict within Garnett?
Yi: I guess because I look at it as two people I’m like “Oh cool, Sapphire’s there.” I remember Ruby said to Sapphire “I like being being torn apart because I get to see you” and I think that’s pretty romantic. I know sometimes when I fight with my husband I’m like “Dang, I guess we just needed to hash that out and now I feel closer to you after we fought.” So I think it’s healthy to fight.
Rabara: Yeah
Yi: Unless it’s like not. Sometimes it can be really destructive, I think otherwise it’s healthy.
Rabara: I agree

Question: Looking at the progression of your characters, was it what you expected when you first got the part?
Rabara: I had no idea that Peridot was going to lose her limb enhancers and then become small Peridot and you know essentially turn her back on Yellow Diamond. I had no idea so that character arc for me was a big surprise and I’m so thankful for it because its really given me a chance to, you know, be Peridot and she’s a lot of fun to play.
Yi: I didn’t know where my character was going to go but I was pleasantly surprised that she was very flirtatious like “Hey Sapphire. Good to see you again.” Like, I’ve never, I don’t even understand what flirting is. So you know it was a personal growing experience because I just think that talking is flirting.

Steven Universe is set to resume airing the rest of season 4 in November.

Previous article
5 Asian Actors Who Should Play The Male Lead In Disney’s ‘The Legend of Mulan’
Next article
Supergirl Teams Up With Superman in Season Two Premiere: “The Adventures of Supergirl”