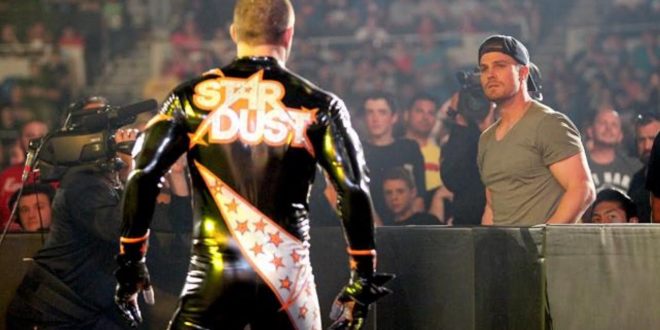 The worlds of pro-wrestling and comic books are finally set to clash tonight as Stephen Amell, star of WB’s Arrow, is scheduled to appear on tonight’s episode WWE Monday Night RAW on the USA Network.

Stars such as Hugh Jackman and William Shatner have guest-hosted in the past — but this is more than just a simple publicity appearance. Amell and WWE’s “Stardust” have been feuding for the last three months, stemming from an appearance Amell made on the May 25th edition of RAW.

It all started on Memorial Day. Stephen Amell was rumored to be at RAW and, if tradition held true, he’d also have a ringside seat for the night’s action. Stardust seemed excited by the notion that a hero was in his “lair” and Tweeted this before showtime:

Amell was ready for Stardust and challenged him to show up and get in his face:

As Stardust’s revised gimmick (don’t tell him it’s a “gimmick”, though — he hates that) is inspired by comic book character, “Mr. Sinister”, his confrontation with Amell felt almost like a natural move.

After Stardust’s match with WWE’s own superhero, Neville, Stardust talked to JoJo Offerman backstage, calling out Amell. Gone was any pretense of Amell being a “mild-mannered fan”. Stardust declared that he had simply exposed his secret identity — and took joy in doing so.

How did Amell react to Stardust’s invitation to RAW? He dared Stardust to watch himself…

As fans pressed for answers on a possible match, Amell posted this:

Lots of rumors circulating that I’m fighting @StardustWWE at Summerslam. Not true. Cody wants no piece of me.

Amell was not happy about this and used his favorite movie to tell Cody that he was way in over his head:

But Cody, like any supervillain worth his salt, reveled in Amell’s anger, posting a pseudo-psychotic offer of “friendship” — and beckoned Amell to come back to RAW…

For the next month, Amell seemed silent on the idea of being involved with WWE in any way, shape or form, save for a Tweet from The Miz in July. Amell responded accordingly:

But, seemingly out of nowhere, Stardust returned in mid-July from an “anti-superhero” campaign, defeating Neville in action on RAW. After the match, Stardust left a warning on the arena’s bathroom mirror:

Amell tried to rise above it and congratulated Stardust on his return and his victory:

Hey man. Congratulations on your first match back. You made a statement!! https://t.co/EhpvAXAXXB — Stephen Amell (@amellywood) July 14, 2015

At first, this seemed like the end of a long feud — until Stardust showed up to taunt Neville and declared that “arrows, no matter what color, always come crashing down while stars last eternal.”

Amell struck back with a vengeance, declaring that Stardust was beginning to cross a line by insulting The Green Arrow…

@StardustWWE — you can insult me all you want. When you start insulting The Green Arrow & all it represents you’re towing a fine line. — Stephen Amell (@amellywood) July 24, 2015

He would later call out Stardust and any of his minions for being all talk and no action:

Ever ready to battle, Stardust took to not only insulting Amell and Green Arrow — but, also John Cena, threatening to break Amell’s nose, just as Rollins broke Cena’s:

Even WWE’s Eden, a woman with a “strange affiliation” to Stardust got into the act, hyping up a match between the actor and the wrestler — but Amell warned her to be careful with what she wished for:

Noted WWE artist, Rob Schamberger, also put in his two cents, posting a beautiful painting, representing the feud between the two…but Amell dismissed it, saying that the fight was “wishful thinking”:

Stardust added in his own “art”…

Once again, Amell warned Stardust to back off, saying he was close to coming back to RAW:

Hey @StardustWWE – I’m not a wrestler. But if you keep calling me out, I’m going to come to Raw and punch you right in the mouth. — Stephen Amell (@amellywood) July 28, 2015

Stardust responded in kind, posting a video of him on WWE Smackdown, attacking R-Truth after telling Truth that he had “failed his city”. Neville saved Truth from certain doom — but the damage had been done. Stardust even bragged about what he had done to Amell:

Amell had finally had enough…it was time for him to Aveng–uh, I mean, seek JUSTICE for Stardust’s misdeeds!

You know the saying imitation is the sincerest form of flattery? I disagree. Somebody point me towards @StardustWWE! pic.twitter.com/MSAOHLYNOT — Stephen Amell (@amellywood) July 31, 2015

And then, later, he would declare that he was on his way to RAW…

Ok @StardustWWE — you asked for it. See you next Monday. #AmellGetsRawpic.twitter.com/A9v9ReZHa5 — Stephen Amell (@amellywood) August 4, 2015

If Stardust had any fear over Amell’s impending arrival, he certainly didn’t show it…

And he would sit down for an interview with Michael Cole, where he’d tell Cole that Amell simply had “everyone fooled”. This angered Amell again and he simply turned Stardust’s words around on him:

Look @StardustWWE – if I actually do have “everyone fooled” you’re in huge amounts of trouble. http://t.co/05lcNPvB8n — Stephen Amell (@amellywood) August 5, 2015

Stardust simply declared that he couldn’t wait for Amell to appear on RAW, giving another one of his weird promos…

But all Amell could do was laugh, mocking Stardust’s “bow and arrow” imitation:

The Brooklyn Brawler decided to come to Stardust’s aid, pleading with Amell not to take Stardust so lightly…and Stardust agreed with his assessment:

Stardust even tore a poor fan’s Amell sign in half and posted it on Twitter, then begged Amell for his help!

After Amell apologized to the fan for Stardust’s behavior, he gave Star one final warning…

That leads us to tonight…

This is the very struggle between good and evil…right vs. wrong…a Green Arrow vs. the darkest matter in the galaxy…and it’d be a crime if we didn’t give you a little hype reel to end this…

Matt Perri is one of those literary Ronin you’ve never heard of until he shows up and tells you he’s a literary Ronin. He’s a native Californian, a film buff, old school gamer geek, and a sports/entertainment fan. A lifelong Giants, 49ers and Sharks fan, he also covers the world of pro-wrestling, writing recaps for WWE Monday Night RAW and Total Divas at Scott’s Blog of Doom. You can follow the guy on Twitter via @PerriTheSmark as well as here at The Workprint and his own blog, Matt's Entertainment.
@PerriTheSmark
Previous Stephanie Bennett, Paulino Nunes, and Jack Fulton Join ‘Shadowhunters’
Next ‘Rare Replay’ Review: One For The History Books 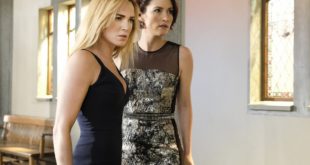 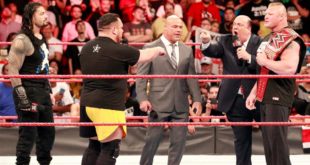 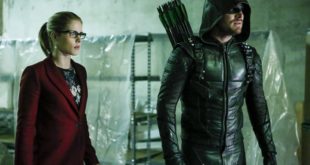