‘Star Wars: The Last Jedi’ – The Lightsaber That Could

The latest film in the Star Wars franchise has succeeded in taking bold surprising risks yet nonetheless remains true to the spirit of what made the space opera resonate with audiences for so many years. There were so many things going on during the course of two hours and 33 minutes but I wanted to take a moment to focus on a uniquely elegant weapon amidst a sea of blasters and new deadly armaments. Full disclosure, I have wanted my own lightsaber since the age of 13 and even studied fencing in college to secretly live out my dream of becoming a Jedi…anyways…

MAJOR SPOILERS AHEAD FOR THE LAST JEDI. YOU HAVE BEEN WARNED. 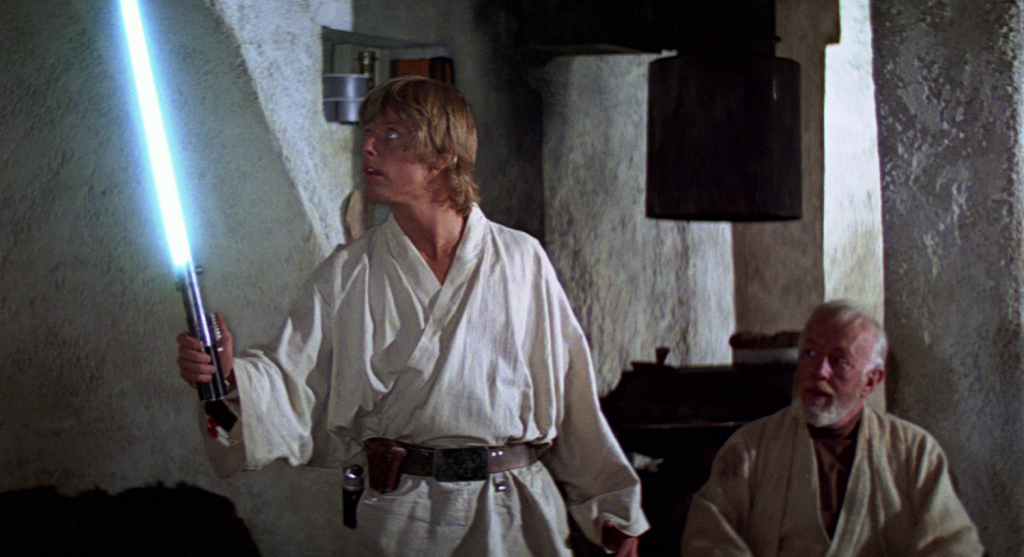 The notable weapon has been an iconic part of the series since Episode IV and it plays an important part of Episode VIII as well. We all know that Luke inherited his father Anakin Skywalker’s lightsaber from Jedi master Obi Wan Kenobi back in Tatooine. He had it with him on the ice planet Hoth where he used it to kill a Wampa and make a hole inside an AT-AT walker to throw in a bomb during the Galactic Empire’s attack on the rebel base. Luke also possessed the weapon during his training on Dagobah with Yoda as well as when he left for Bespin to help his friends. It was on the cloud planet when he encountered Darth Vader and battled the dark lord of the Sith where he lost both a hand and a lightsaber.

Fun factoid, this was actually Anakin’s second lightsaber having lost his first one on Geonosis.

Many years later the weapon resurfaces with Maz Kanata (played by Lupita Nyong’o), a former pirate and smuggler in The Force Awakens. We first see it when Rey (Daisy Ridley) finds it in Maz’s castle, having been drawn to it through the Force. When she touched the hilt, visions flooded her mind and frightened her immensely. Understandably the scavenger didn’t want anything to do with it. Maz though gives it to Finn, suspecting that Rey would need it in the future. This indeed happens when the two friends are running for their lives in the snowy forests on Starkiller Base. The ex-Stormtrooper gets knocked out by Kylo Ren and the two Force wielders engage in a lightsaber duel. The scavenger from Jakku emerges the victor despite having no training whatsoever. Episode VII ends with Rey on the island where Luke is, offering him his old lightsaber and audiences screamed in anticipation.

Picking up where TFA left off, The Last Jedi shows Luke taking the weapon with his mechanical hand and simply throwing it over his shoulder in utter disregard. He doesn’t want anything to do with Rey nor has any inclination to return to the fight despite the younger woman’s plea that his sister Leia needs his help. Thankfully the lightsaber didn’t fall into the water, but sat safely on a ledge and is later found by Rey (porgs were interested in it too). She tries to convince him repeatedly that he needs to come back to no avail. The scavenger is a stubborn one though and stays on the island despite his clear desire for her to leave him the hell alone. With nothing else to do, she begins to do some combat practice with her staff and then decides to try it with the Jedi master’s weapon and she looks pretty good wielding it, once again without any real training whatsoever. Luke watches on with some interest but walks away after she accidentally slices through a piece of rock. Whoopsies. At another point in time she instinctively uses the Force to pull the lightsaber to her and almost attacks Luke with it during a very heated confrontation. During this skirmish, he shows viewers that he’s still nimble and incredibly skilled in a way we’d never seen in the original trilogy. Yes, my inner geek was squealing in pure joy the entire time.

Rey decides to leave the island with the hope of turning Kylo Ren/Ben Solo back from the dark side, having had a vision of his future when the duo Force touched across space. She tries to once again ask Luke to come back with her and save his nephew but he still refuses. She departs with Chewie on the Falcon and takes Luke’s lightsaber with her when she gets into an escape pod to go to Snoke’s ship. Once within the hangar bay, Kylo greets her with stormtroopers and handcuffs. He then takes her to Supreme Leader Snoke’s chambers where the Force-sensitive head of the First Order resides.

What follows next is an incredibly intense set of moments that grips your heart and doesn’t let go. Snoke is definitely team dark side but he doesn’t appear to be a Sith Lord as he doesn’t use the title Darth. He uses the Force to take the blue lightsaber and one can’t help but compare this scene to Emperor Palpatine, Vader, and Luke on the second Death Star in Return of the Jedi. The younger Skywalker’s earlier warning to Rey that this isn’t going to turn out the way she thinks it will is a little reminder to fans as well because boy this sequence was insane in the best way possible. So Snoke tells Rey that she’s naïve in thinking that she can turn Kylo back to the light side because he knows his apprentice’s every thought and feeling. It was the Supreme Leader who actually made the Force connection between the two and manipulated them both to do his bidding. She tries to retaliate but the disfigured humanoid creature is much stronger and easily deflects her attempts to attack him. Meanwhile Kylo is kneeling before his master much like Vader did with the Emperor. Snoke now senses a strong resolve in his pupil and tells him that he must kill Rey to fulfill his destiny. As he narrates what’s going on in Kylo’s mind, audiences may think that the scavenger is done for as the ex-Jedi is ready to kill his true enemy. But then he uses the Force to turn the blue lightsaber towards his master and activates it, slicing the Supreme Leader in half. What follows next shows us what a powerful duo Rey and Kylo make when they work together. They are able to take out Snoke’s Praetorian guards through both individual battles and teamwork.

The next pivotal moment is when Kylo tells Rey that they need to let the past die, both the Sith and Jedi. He wants her to join him and they can rule the galaxy together. He even tells her that she knows deep down that her parents were insignificant nobodies who sold her off for drinking money and that they were dead and buried in unmarked graves on Jakku. Kylo makes her admit that she knew this deep down but he adds that she matters to him. He offers her his hand and even asks “please.” Well holy nerf herders! Rey’s hand begins to reach out and film attendees everywhere gasp not knowing what’s going to happen next as she Force grabs the blue lightsaber! But it doesn’t come to her because Kylo is fighting back trying to bring the weapon to him. It’s a battle of wills for this object that’s been tied to so many Force wielders and is a Skywalker legacy. Both individuals are giving it their all and it results in the lightsaber breaking in half and causing a small explosion. This is such an important moment in the film and in the Star Wars universe as a whole because it symbolizes the end of the old and the beginning of something new.

Interestingly enough as well, when Luke appears in Krayt to battle his nephew, he is using his father’s lightsaber again instead of his green one from Return of the Jedi. Earlier during the flashback scene with Luke and Ben Solo many years ago, we see the Jedi master wielding the green blade as he considers killing Leia and Han’s son after seeing the darkness within the boy. So why did the he choose to use his first lightsaber in this confrontation? Perhaps he felt that he had to return to his roots. Kylo must have been so focused on his anger towards his uncle that he didn’t notice that he and Rey had just fought over the very same weapon the Jedi was holding.

This scene was incredibly nostalgic as well, harkening Ben Kenobi’s battle with Vader in Episode IV on the first Death Star. We have two masters fighting against former pupils who’ve gone dark. I was anxious the entire time because I was expecting Luke to pull an Obi Wan and vanish before Kylo’s eyes. It does eventually happen with a twist! Surprise Skywalker isn’t actually there, he’s been on the island the whole time and was Force projecting himself being the OG that he is. Luke then sits himself on the rock, gazes at the horizon and vanishes peacefully. 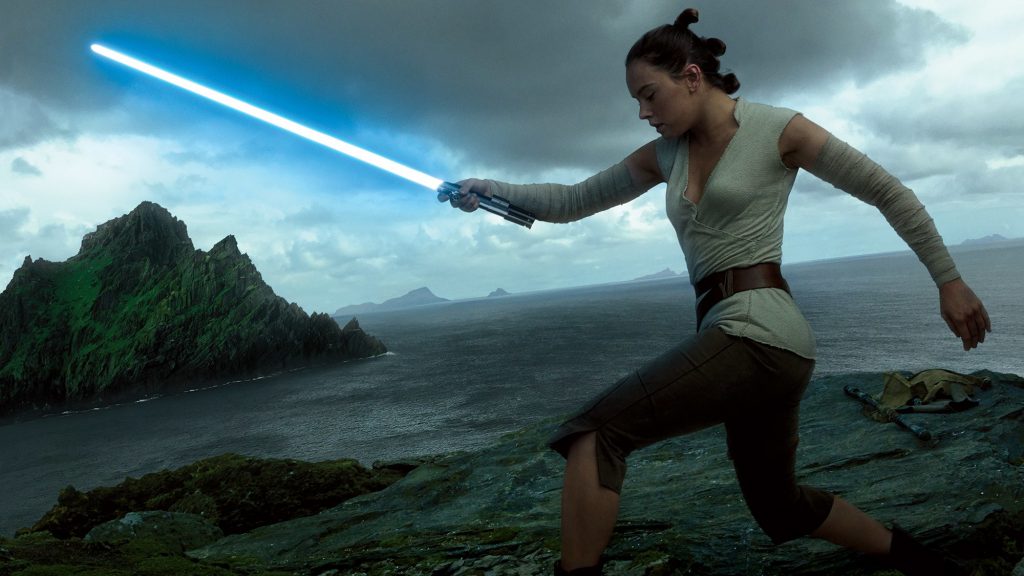 As he does, both Leia and Rey sense his presence vanish as the old Jedi became one with the Force. Inside the Falcon, the scavenger is holding the two halved pieces of the blue lightsaber (and we see the Kyber crystal within!) and asks General Organa how they can possibly rebuild. The princess calmly answers that they have everything they need. Given that the lightsaber is an essential part of Jedi training, I can’t imagine Rey not having one of her own in the next film. Perhaps the Jedi texts that were hidden on the Falcon (did she take them from the island?) will hold an instructional guide on how to build one herself.

The blue lightsaber was tied to so many important characters in the Star Wars universe and had gone through so many different battles that it’s hard to say goodbye. It had been with Anakin through the Clone Wars, with Luke through the Galactic Civil War, and been kept safe by both Obi Wan and Maz. On it’s final run with Rey, the weapon was able to take out a big villain in Snoke and perhaps she’ll be able to rebuild it to truly make it her own. One can hope at least! I’m counting on you J.J. Abrams.

For now, rest in peace old friend. You did good.