In the season 3 finale, the silence is broken as Elliot and Mr. Robot share a breakthrough, the Dark Army closes in, and Irving goes full on American Psycho outside of a barn. We finally learn why Phillip Price is so invested in Angela, and Elliot makes a choice for himself, as the series reaches a major turning point.

Grant and the Dark army raid Elliot’s place, as Elliot hides across the hall in Shayla’s old apartment. Concerned that the Dark Army has taken Darlene, Elliot asks Mr. Robot for help.

They argue over why they haven’t been talking all season. Elliot admits that it’s because he fears the part of him that is Mr. Robot. Mr. Robot confesses that had he known about the bombings, he would’ve found another way. They acknowledge that they’re part of one another: just as Mr. Robot is a part of Elliot, Elliot in ways, has been influencing Mr. Robot. This is a major turning point in the coming together of Elliot’s split-personalities. Though, it only works because they’ve acted with separate interests all season.

Mr. Robot shares with Elliot that thes a mole in the FBI is Santiago. They raid and search through Santiago’s belongings but get interrupted by Irving, who suggests that the two come with him.

“You don’t understand what they put me through… But you will soon enough.” – Santiago

Meanwhile in the FBI headquarters, Santiago tries to kidnap Darlene, but Dom catches him in the basement garage and after a brief inquiry, he punches her in the face. When Dom comes to, she is tied up in the backseat with Darlene in Santiago’s car. Dom puts the pieces together about how Santiago was involved on both sides and has hindered their investigation the entire time.

“Find a way to live with what you did.” – Price

After being taken in a Van last week, Angela eagerly awaits inside a mansion, stating that she has important information for Whiterose, but soon learns she was actually taken by Phillip Price.

Wanting to leave, Price admits to her that he’s looked after her all this time, as she was in Whiterose’s way with her lawsuit, and Whiterose is someone that goes to any means to eliminate threats in her way.

Confused as to why he helped, Price reveals to Angela that he used to date her mother, and that though he loved her, he also took pleasure in keeping emotionally distant. As a result, Angela’s mother saw to it that she be kept away from her monster of a father, revealed to be Phillip Price. Never planning on telling Angela the truth, Price only intervened when he saw how much Whiterose’s manipulations (Promising to undo everything, including the death of her mom) drove Angela mad.

Angela admits to killing those people in the cyber bombings. She confesses that she served Whiterose because she believed that there had to be a bigger purpose to those deaths, to which Price reveals that there wasn’t. It was all pettiness between him and Whiterose. Emotionally broken, Angela wants to know what Price will do in retribution. He tells her to just accept the fact that she’d been conned.

Much like Tyrell, Angela was being used to achieve a goal for the Dark Army. Disappointing because this was all very much what Elliot told her last week and what the audience had known for most of the season. Though it was cathartic how the reveal of the nature of Price’s relationship snapped her out. 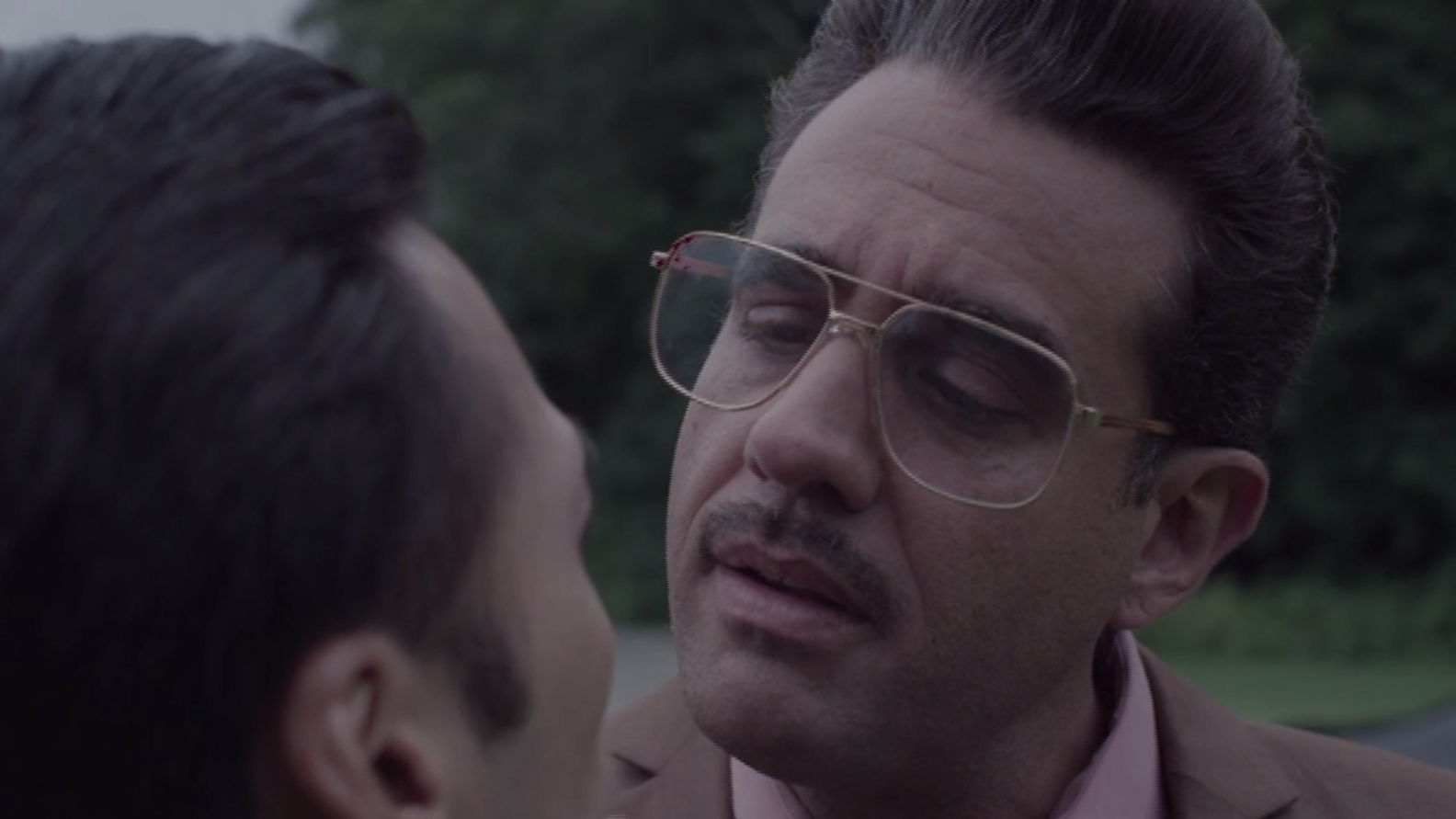 “In time. This’ll get easier to live with. I promise.” – Irving

Irving takes Elliot/Mr. Robot to a barn in middle of nowhere, where Angela and Darlene await. Leon is there too with a group of Dark Army henchmen. Irving and Santiago then take Dom outside to be executed.

In a very tense moment, Irving takes the outside woodchopping axe in hand (The one Tyrell had been using for months while hiding) as Santiago pleads with Dom to work with the Dark Army. Just as she braces herself, Irving swings the axe and buries it in Santiago’s chest. Irving tells Dom that she works for the dark army now. When she refuses, he begins going over a detailed list of every single member of Dom’s family and where they live, as he violently decimates Santiago with the axe. He tells Dom to imagine it’s her various family members, as he continues down the list of her family and hacks away. When she returns to the barn with blood stains, Leon states, “Looks like she just got her initiation.”

After cleaning up, Irving tells a recently arrived Grant that he took care of everything and is going on sabbatical. Grant demands that he stays, but Irving reveals that he used to be Grant five years ago (Whiterose’s right hand man and coerced lover) and that he believes she’ll be okay with his leaving.

Interesting, as not only does this serve a way for Bobby Cannavale to leave the series for now (if he wants to) but it also gives us a bit of depth into the history of Whiterose. Particularly, that she might do this and have relationships like the ones she has with Grant, frequently.

“History, is finally coming for you.” – Grant

Elliot/Mr. Robot debate about what to do next and Elliot finds a camera that Whiterose must be using to watch them. When Grant arrives to kill Elliot, Elliot admits there is no stage three and that he hacked the Dark Army, threatening to release all information to the public. An empty threat, as Grant admits that the Dark Army would survive regardless, and that even if Elliot reversed 5/9, they’d already gotten what they needed. In a final effort, Elliot offers to move Whiterose’s project to Congo. Grant believes it’s a lie. Elliot and Darlene are put at gunpoint, but before being shot, Leon kills the guards. Grant answers a call from Whiterose, which ends with her essentially breaking ties (and breaking up) with Grant over his jealousy/lack of faith in Elliot. Grant responds by killing himself. Elliot sends what Whiterose needs to the Congo.

“You are a terrible person. Don’t ever convince yourself of anything else.” – Dom

In the aftermath, Dom gives Elliot access to Sentinel: the FBI’s secured network. In her departing words, Dom condemns Darlene: that she ruined her life, and forced her to abandon her convictions, leaving on a note that was just shy of malicious. Now burdened to live as a pawn to the Dark Army, Dom’s hatred of Darlene makes sense.

Finally, Elliot accesses Romero’s files but discovers that all Romero found was that somebody else exported the key data. Elliot realizes that it was Mr. Robot, who claims that he did it because it’s what Elliot would’ve done. They question whether-or-not they should do this, as undoing 5/9 means that it would be all for nothing. Elliot responds that the incidence brought the real enemies out into the light, and that his goal is now to take them down.

With renewed conviction, Mr. Robot reveals that he had transferred the data to a drive at home and burnt it onto a CD hidden under an image of Elliot and his dad. Elliot uses the information and sends an E-mail to E-Corp, seemingly undoing 5/9 and nicely wrapping up season 3.