‘Shadowhunters’: Who Is Brother Zachariah?

On this week’s episode of Shadowhunters, Magnus seeks help from an old friend who has access to demon information in an attempt to identify the Owl’s master.

When Clary goes to the warlock’s loft after encountering a strangely behaving Jace at the Institute, she shows Magnus a drawing of the winged beast that attacked her. He says that demons will leave a trace amount of magical energy on their victims and if he was able to access that perhaps they could figure out who this creature is. He realizes after casting a spell on Clary that whoever killed the angel and attacked the Shadowhunter is the same one who messed with the ley lines under Lorenzo’s home. He takes her drawing and magically inscribes a note then sends it off to a friend whom he says has resources that could help them. A response arrives a few moments later with Magnus telling Clary that Brother Zachariah (Jonathan Ho) is willing to help and that he’ll meet with them tonight.

They rendezvous at a small park where Clary is surprised that Magnus’s buddy is a Silent Brother. However, he’s not an ordinary Silent Brother as Zachariah does not have his eyes and mouth sewn shut, seemingly still appearing as the Shadowhunter he had once been many years ago (though he does communicates mentally). He hands over a book and a scroll that contains information on long forgotten demon forms to the warlock and cautions that the brotherhood cannot know that he helped them on this. Magnus assures him of complete discretion and gives his thanks. Brother Zachariah genuinely expresses that any friend of Will Herondale is a friend of his. The name Herondale of course resonates with Clary and the warlock explains that he and the Silent Brother had both been close to one of Jace’s ancestors. She them implores Brother Zachariah to tell her how Jace’s treatment went at the Silent City because he’s seemed off since he got back. That’s when she learns that her boyfriend never came for said treatment. Uh oh! 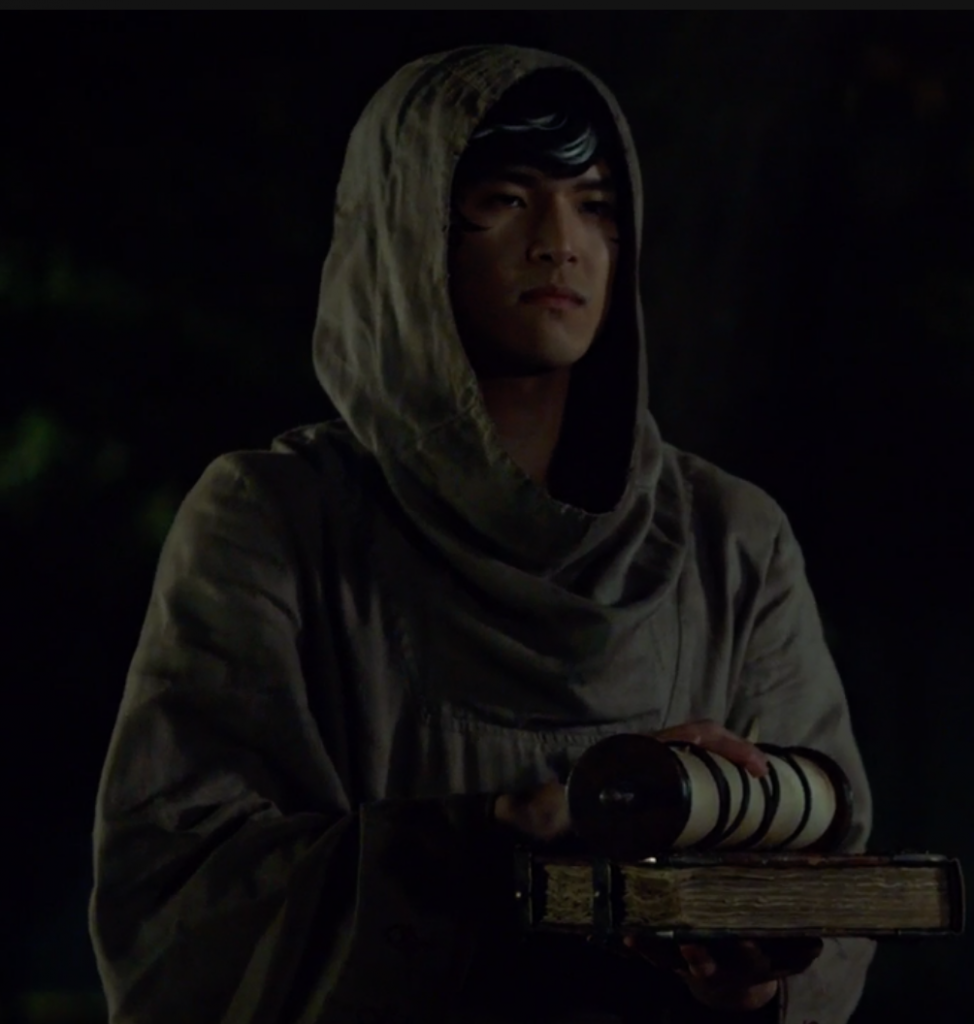 SPOILERS FROM THE MORTAL INSTRUMENTS, THE INFERNAL DEVICES, THE DARK ARTIFICES AHEAD

Readers of The Mortal Instruments, The Infernal Devices, and The Dark Artifices series know the importance of Brother Zachariah. He was born James “Jem” Carstairs at the Shanghai Institute in 1861 to a British father (Jonah Carstairs) and a Chinese mother (Ke Wen Yu). His parents ran the Institute and unfortunately were killed by the greater demon Yanluo as retribution for the Carstairs destroying its nest. Jem was tortured and injected with yin fen. Though he survived, the young boy would forever be dependent on the drug to function despite it slowly killing him. Soon after he was sent to the London Institute and taken in by Charlotte Fairchild Branwell. It was also in his new home where he met Will Herondale, the young Shadowhunter who would become his parabatai.

Will had his own demons to wrestle with as he believed he was cursed. But a year after arriving, he had asked Jem to be his parabatai and eventually the other Shadowhunter accepted. Later when Jem was 17, both he and Will met Tessa Gray, a young warlock who would change both their lives forever. Tessa was the daughter of a Shadowhunter and an Eidolon demon, which gave her unique shapeshifting abilities. Both men loved her and for a time she was engaged to Jem (she would later marry Will).

However, during the events in The Infernal Devices series, Jem was growing weaker and he decided to become a Silent Brother in an attempt to continue living. While it wasn’t certain that he would survive the process because of his poor health, Jem did and became known as Brother Zachariah. He would be in service to the Clave for a very long time. Eventually though the cure for the yin fen in his blood would come through Will’s descendant Jace Herondale.

During the Dark War, Jace had the heavenly fire in him and when Brother Zachariah tried to aid the young Shadowhunters, the fire miraculously burned away all the demon blood in his system. The Silent Brother became a regular nephilim again and after the war with Sebastian/Jonathan Morgenstern he reunited with Tessa. The two eventually married and travelled to California in search of the lost Herondale line. In The Dark Artifices series we learned that the last member of this lost branch of Jace’s family was Kit Rook, or Christopher Herondale.

Kit’s dad Johnny Rook was an information trader who had a booth in the Los Angeles Shadow Market. He was killed by Mantid demons after the death of warlock Malcolm Fade who had placed protective wards on his home in exchange for Rook’s services. While they were being attacked, Kit had called Emma Carstairs for help and she came with Jem and Tessa. After that, the young newly discovered nephilim was forced to reside at the Los Angeles Institute. 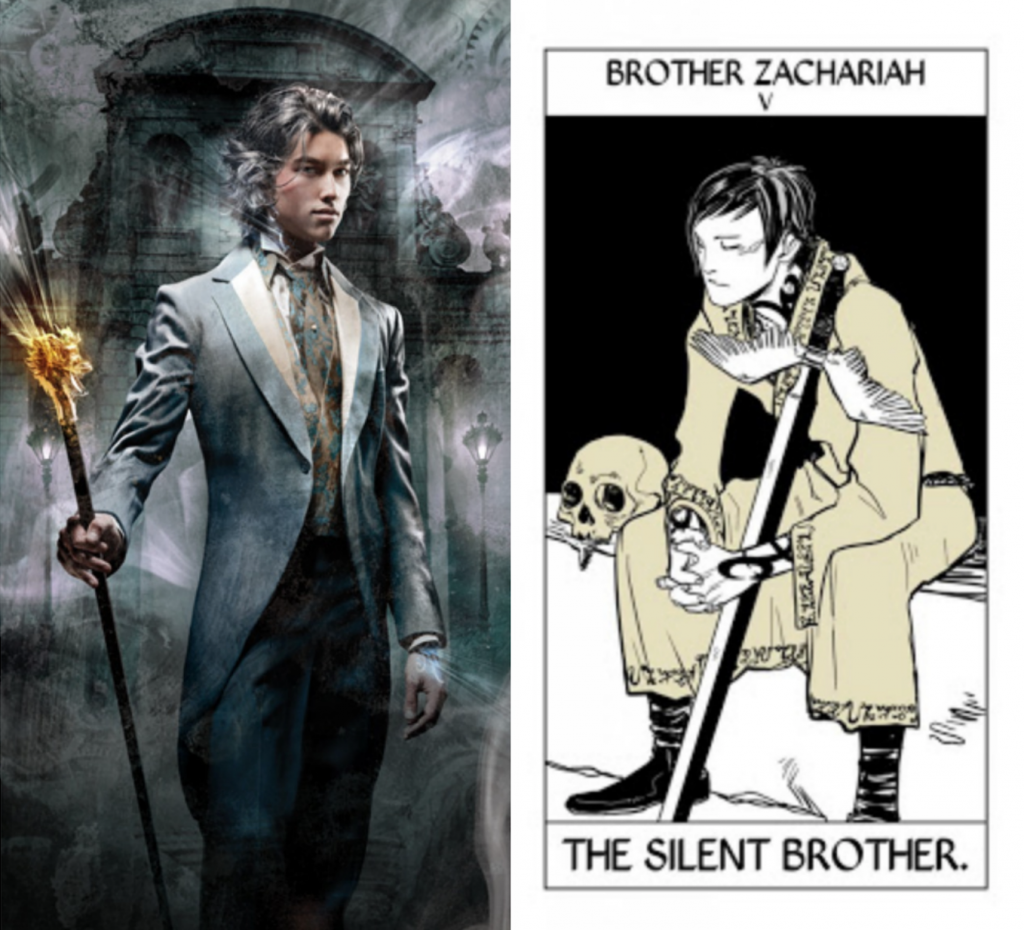 Jem had also revealed his identity to Emma, as they both were now the last of the Carstairs family. While he couldn’t stay with her in LA due to other business, he did try his best to stay in touch with her especially through his cat Church. Church is an immortal cat that Jem rescued from the demon Mrs. Dark after she had performed a necromantic ritual on the poor animal. Ever since then the feline had lived in three Institutes – London, New York, and Los Angeles. Church was able to give Emma small gifts from Jem through his collar.

The former Silent Brother had watched over many Shadowhunters throughout the years, especially those descended from the families he had known and was close to when he was one of them. Jem had even participated in the protection ritual on Clary when she was young with Tessa standing in as an Iron Sister.

It’s such a wonderful treat to see Jem on the screen! It’s also incredibly appreciated that the show casted an Asian actor for the role given that Brother Zachariah is half-Chinese. Also the detail in adding in the silver in his hair as a tell of the yin fen in his blood is a great touch. He is a character that’s appeared multiple Cassandra Clare novels and is a vital link tying multiple generations together. Sincerely hoping that we see him again on the show, perhaps even with Tessa. Now that would be an even bigger boon to fans everywhere!

Showrunner Todd Slavkin has confirmed that the actor who plays Brother Zachariah/Jem Carstairs is Jonathan Ho and that we indeed will see him again!

Meet Brother Zachariah aka Jem Carstairs. He will be back to shower us with his wisdom and compassion #welcomeJonathanHo #season3 #shadowhunterschat #shadowhunters https://t.co/UnmV6U8C52

Previous article
Supertrash Cast: “Schott Through The Heart”
Next article
‘Avengers: Infinity War’ is the Crowning Jewel of the MCU