‘Scream’ review: Dancing ’til they die


Dammit, Scream. You had one job. That was it! Just one!

And you squandered it.

I don’t want to believe that writers employed for MTV’s various dramas are willfully stupid. I picture honest-to-gosh people who stare at the same blank slate I have each week and wonder how they can give their audience something to connect with. I don’t want to believe that they write scripts in four hours with Stickies attached to various pages with the words, “LET’S GET STUPID HERE” scribbled in red pen.

It starts well enough. We actually see The Killer a year before this whole mess started. We don’t see their face. They’re in a hoodie and they invade an evidence locker that has all of Emma’s personal stats and the Brandon James mask. This little moment is very cool and actually reminds me of the bit in Scream 3 where Dewey tells Sydney that The Killer raided an evidence locker in order to find everything about her life. I liked this.

Then the show started.

Last week, Mr. Branson was taken into custody by the Lakewood Police. I’d give them full credit for the bust, except Noah and Audrey did all the field work. They found the murder weapon, they called it in, they even found out that Kieran was with Nina the night she was filleted. I’m beginning to think the only reason Lakewood’s cops exist is because they’re the only ones legally allowed to have jail cells in their building. Of course, Noah and Audrey probably have to show them how they work but, still…

Emma’s curious about Branson and wants to interrogate him in order to obtain some sort of confession. Emma’s Mom’s basically like, “She has no training and she’s not a cop, but she can do this.” And Sheriff Hudson’s cool with that. I’d sit here and waste time trying to point out how that’s totally fucking illegal, except I have no strength left to do it. All I can do is cry now. I just sit and watch this shit and I whine at my TV like Bill Paxton in Aliens. 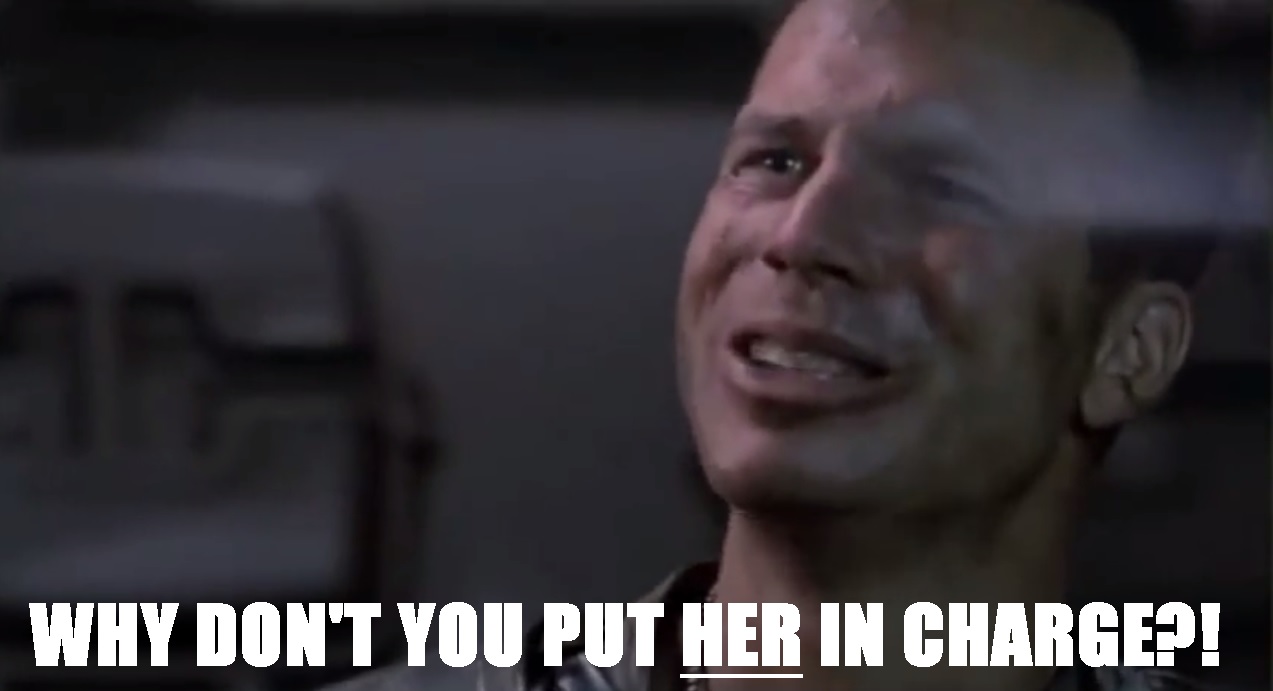 Anyone with a brain can see that Branson’s incarceration is a red herring, but the writers are content to play the angle out in the most illogical fashion possible. Branson now glowers at his interrogators menacingly, speaks in a creepy Hannibal tone and, when Emma asks Branson if this is all over now, he gets smug and cryptically intones, “I guess you’ll find out soon enough.”

But enough of all that! Emma’s back to normal! “But, Matt,” you’re saying. “what about Will and–.”

“But, she watched as he got chopped in ha–.”

I said shut up.

“But she was on medication and couldn’t slee–.”

Are you done? Good. Emma’s totally fine. In fact, she’s back to banging Kieran now. She makes out with him when he comes over to visit and Emma just welcomes back into the fold, no biggie. Let’s recap: she started the series with Will. He betrayed her trust, so she went to Kieran and had sex with him — then dumped him after Will was rescued from The Killer. She watches WIll die and, two weeks later, Emma’s not only mentally cured, she’s hot for Kieran because he’s in one piece and has a pulse. Does anyone else find any of this really awful? Because I do. She even invites him to stay for dinner which is comprised of “pizza her Mom is ordering”. Kieran’s Dad will be there, too. What’s he gonna say, “No”?

Scream does us the service of actually showing said dinner. It’s done in slow-motion as the camera tracks around the table. Music plays while everyone’s laughing and having the time of their lives. Nine episodes and we get this. It’s so completely surreal and out-of-place, even Lars von Trier would find it disturbing. But there it is. It’s just dropped in front of us, whether we like it or not, just like the Yellow Pages.

Also seemingly over her depression is Brooke. She’s staying with Jake since both her Dad and boyfriend are in jail. Because Carlson Young is contractually obligated to walk around in her underwear every other episode, she prances around in bra and panties before using the shower. Somebody’s spying on her, hacking the camera on her computer. Due to her trust issues, she automatically suspects Jake since Seth is behind bars and, after confronting him, leaves his house to “go home”. But, not to worry: Brooke’s gonna have a Halloween party! She’s even able to buy liquor, no questions asked. 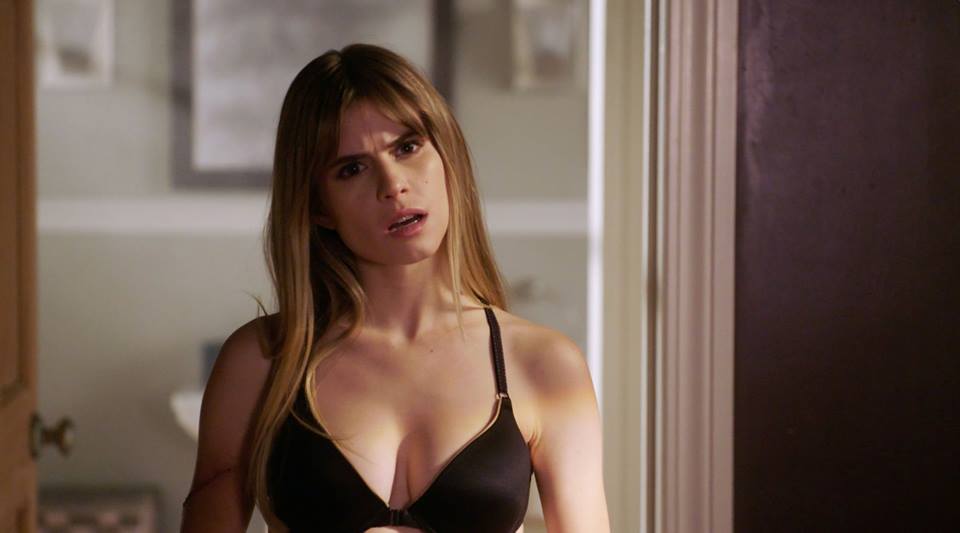 As long as I live, I will never understand Brooke as a character. Nearly every single thing she does is rash knee-jerk bullshit or just plain incompetent. Her character is supposed to be intentionally “broken”. Instead, she only does things because that’s what the script says. She’s wholly unbelievable. She has trust issues but constantly trusts morons. Her life is threatened — but she does nothing to stay out of that predicament. She has sex with a guy who waffles all the time and who isn’t interested — and she goes back to him and even defends him — even when it’s apparent that he’s behind all the murders. There are characters with layers and flaws and then there are characters who are doing things for the sake of the script. Brooke is the latter. She’s worse than the kids on GLEE, and that’s something I never thought I’d say. In fact, I think Ryan Murphy has come up with more stable, solid characters than Brooke.

So, the main story here is that somebody’s been visiting Brandon James’ mother (AKA “Another Character Who Suddenly Exists On This Show”). Because Piper has no idea how to conduct a thorough investigation (she needs to team up with Noah and Audrey), she gets nothing out of the woman. The second time around, however, James’ mother claims Branson visits her. The third time around? Kieran. Yeah, it’s gettin’ weird. On top of this, Audrey and Noah discover that Kieran was with Nina the night she was murdered — but, in true Scream on MTV fashion, Emma just cannot believe this. Why? “Branson is the killer!” She tells Audrey. “The DNA test will prove that!”

All this is revealed to Emma at the school’s Halloween Dance where Emma and Kieran dress like Mia Wallace and Vincent Vega, respectively. In fact, a good minute of the show is spent reenacting the entire goddamn dance sequence from “Pulp Fiction”. What purpose does this serve? First, it’s not even a horror film. Second, who in the hell is going to “get this”? I get it because I’m in the demographic who would get it. MTV’s overall demographic is teenagers. But, fear not! Noah’s on it, spinning Chuck Berry’s “Never Can Tell” just so Emma and Kieran can do their thing before he goes back to blasting Kaskade for the young ‘uns. Eventually, Emma does confront Kieran about the night with Nina but Kieran claims innocence, then tells Emma that Branson has made her paranoid of everyone. “Even from his jail cell, he’s won,” he tells her before walking off.

The big twist in this episode is that The Killer has used this event as the giant distraction it is. While Sheriff Hudson checks out houses near the source of Seth Branson’s phone calls (illegally, I might add), GhostMcMeltFace shows up to knock his ass out and kidnap him. Then he hacks the giant movie screen behind Noah’s DJ station to show the entire school that Hudson’s tied to a tree and begging for help. It can’t be Seth right? Oh! I forgot…he kinda escaped from jail, leaving a a bit of a mess behind.

I want a strong finale from this show. It’s already locked for a second season so it has nothing to prove to its corporate overlords in New York. It’ll need a strong finish because that will keep people like me watching and I know for a fact that there aren’t many of us left. The ratings among the main demographic of this show are in the proverbial toilet. This episode isn’t exactly a sign of good things to come. Week after week, Scream gives us moronic programming, the product of a team of morons who believe that they’re catering to morons. It’s an incredibly cynical view to have.

But what else can I expect from a network that put this irritatingly distracting ad in the bottom right hand corner of my screen for two straight minutes during the show?