Ok, we may be getting somewhere. After turning in slop for weeks on end, Scream looks like it may be in for a run down the stretch. It might have a broken leg or some sort of hip condition but it will lurch toward the finish line with everything it has.

After Emma watched her boyfriend-again-for-five-minutes, Will, get sliced in half like deli meat, she’s now…back at school? Yes, she’s back at school. On pills. but back at school. Also, she’s seeing her undead boyfriend all over school with his head split open, so the pills probably need to be taken away or the dosage needs to go up. Depends on who you ask, I guess. 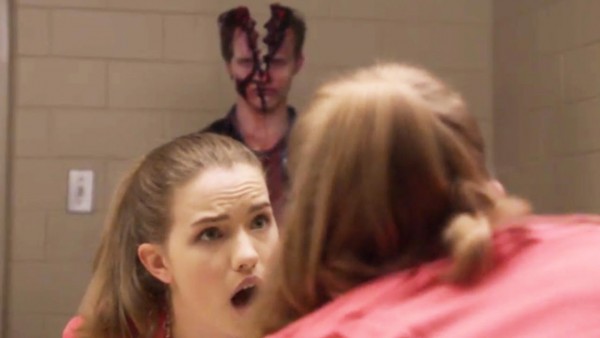 Emma is so damaged. She returns to school much to the surprise of everyone. As the first season is coming to a close, the net around GhostMcMeltFace is getting ever so tighter. While the police are sifting through 50 suspects (and having sex with Emma’s mom), Noah and Audrey are doing their thing, comparing stuff to movies and figuring out who the killer really is. The main suspect? Mr. Branson, the stud teacher who’s been doing Brooke every so often. At least that’s who Noah and Audrey suspect. Piper, the Plucky Podcast Pundit from…I’ve got nothing. Anyhow, Piper suspects the mayor because of the video of him dragging a gigantic body-sized thing out of his car in plastic. But, wait, it can’t be him. He confessed to Brooke that it was nothing, just a guy who OD’ed in his living room. Your usual corrupted mayor stuff. No biggee. Plus, Brooke spoke with her Mom on the phone, so everything’s fine.

Well, everything except the fact that Emma’s seeing the Will-1000 everywhere in Lakewood High’s hallways. HE comes bearing gifts: a beating heart, a necklace, something, and Emma basically reverse-engineers that in her brain and figures out that, hey! These things were at that Abandoned Hospital next to the Abandoned Strip Mall with the Abandoned Safeway and Abandoned Nail Salon! Using shit from her fever dreams, she basically figures out that her Mom was preggers with the child of Brandon James. Emma 1, Long Island Medium 0.

Meanwhile, Noah and Audrey are Scooby-Doo-ing it again. They suspect Branson as their killer and end up finding a knife hidden in the air conditioning vent, a’la Dexter. Yeah, no, Noah made that reference as soon as the reference forced itself on us. Not to fret. They also figure out that Branson hasn’t exactly been around when the Killer makes all of his/her moves — plus, he had another identity befoHe turns this evidence over to the Sheriff who immediately puts an APB on Branson — except where’s Branson? He’s about to get Barely Legal with Brooke, who’s so depressed, she feels like having hot sex in the middle of the high school theater. That is until Seth vanishes to “investigate a strange noise”, leaving Brooke to run, screaming, from the Killer in her bra and panties. That’s when the cops show up to grab Branson and bring him in — but do they have the right person? 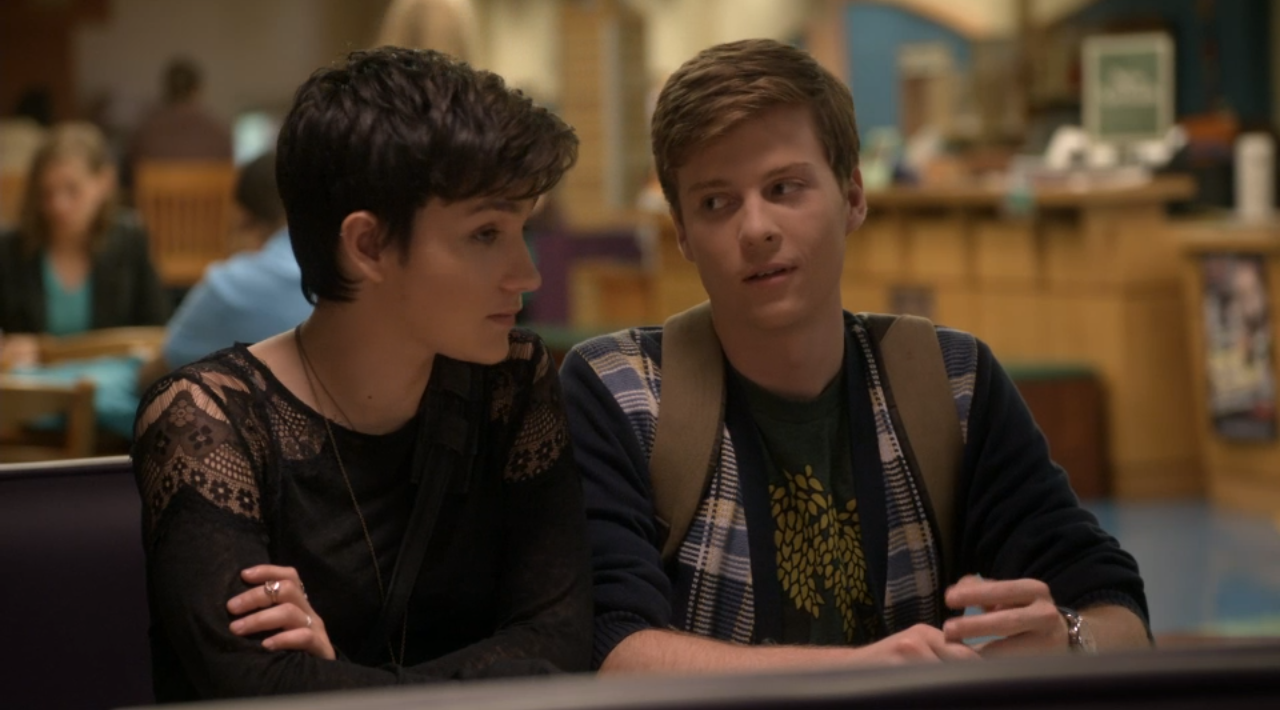 This episode of Scream works because it did exactly what it needed to recover: cut the bullshit, advance the story, narrow down the suspects, and give the viewer what they want in the final moments of the show. Don’t get me wrong, there’s still a lot of garbage that the show asks you to put up with, starting with Emma’s visions of her sliced-up boyfriend, which is effective when it’s first seen but becomes laughable and hokey the more it’s incorporated. Also, the moment between Brooke and the Killer is horrifying and genuinely scary due to the theater set-piece being used to maximum effect. The Killer walks through shadow, then suddenly runs at leaps at her. That’s a nightmare in anyone’s book.

What also works is the confrontation scene at the hospital between Emma and her Mom. This moment feels real. In the past moments on this show, I never truly bought that Emma was actually her daughter. As soft Herrmann-esque strings score the background, her Mom fills Emma in on part of her regretful past. It’s a delicate and moving moment, but also one that underscores the notion that we haven’t been told the whole truth and that past mistakes have come back to haunt her and Emma. Lastly, the chemistry between Noah and Audrey is still the greatest thing on this show. I sincerely hope that Audrey doesn’t turn out to be the Killer (or one of them if tradition is to be followed) because it would be sad to see her go.

Scream may have found it’s final stride and next week’s episode is pivotal because it might prove that the series is able to sustain any momentum.