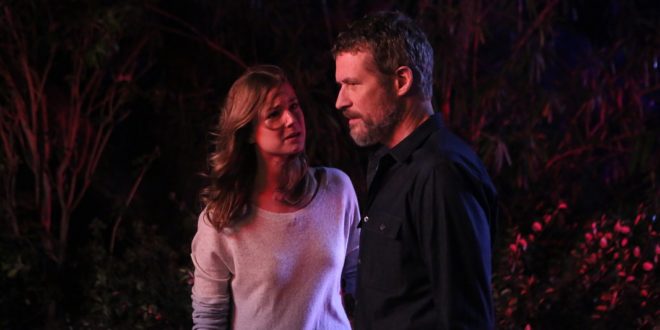 
I’m starting to fear that Revenge has no real idea where it’s headed.

David Clarke came back at the end of Season 3, providing a swerve that was both welcome by fans hungry for a wrench in the works and maligned by fans who thought it rendered everything Emily had done throughout the series completely pointless. We do know that the surprise was against the wishes of former series head, Mike Kelley.

Last night, I watched the show go deliberately vague for no good reason:

Seriously, it’s getting harder and harder to watch this show.

Last week, the show gave us Hallucinatory Mom a’la Dexter. This week, Dexter‘s Courtney Ford joins the show as FBI agent “Kate Taylor”. In four seconds, Taylor not only manages to put two and two together to figure out that the man who may have murdered Conrad Grayson is the same guy who tried to run down David Clarke outside a hotel, she ends up on a date with Jack for no other reason other than Jack isn’t getting any tail and needed something to do. You know, other than moping or warning his partner to “back off of the Grayson case”. Did I mention that happened again this week? Only, this time, they were at a bar, Officer Ben was drunk and the bar had no bouncers as Jack shoved Ben against the bar and yelled, in front of everyone, that Ben was gonna “lose his badge” if he didn’t back off the case.

Meanwhile, Ghost Mom convinces Louise to get preggers with Daniel’s kid by, essentially, raping him in the shower. I actually just typed that and it’s as ridiculous as it sounds, even now. How did this happen, you ask? Daniel totally falls for her scheme to get him that shower because she left a sexy, anonymous note for him, using the same stationary his ex, Margaux, used. Seriously, I cannot make that up. Oh, this, after Margaux dumps Daniel in the most emotional way possible: she admits that she was “in love with him”. Yeah, I wasn’t buying that either. I still don’t. There’s more chemistry in an episode of Mr. Wizard.

Margaux gets over it pretty quick and tries to work her charms on Nolan, telling him that she wants him to dig up dirt on Louise by hacking into her criminal record. At first, Nolan tells her to go to hell because he likes her — but, then, Nolan discovers that Louise has Photoshopped herself into photos with Victoria and realizes that Margaux is right about his new-found buddy. He decides to play ball with Margaux — but at a price: after being humiliated at the hands of David Clarke on live television, he wants her to manipulate public opinion so that he looks like an angel instead of a demon.

As for the Battleship Victoria, she’s recovering from electrocution (PLOT DEVICE) and still manages to manipulate the shit out of David by screwing with his reunion with Emily. As David tells Emily that he wasn’t the one who took the photos she showed him, Victoria subtly disconnects herself from her heart monitor, sending in one of those television nurse teams that immediately calls for charge paddles. My Grandmother may not be as important as Victoria Grayson but she was on death watch a few months ago and when her heart monitor accidentally disconnected, it took Kaiser four minutes to send one nurse in and she wasn’t yelling “CODE BLUE” or saying “I NEED CHARGE PADDLES, STAT!”

Anyhow, David learns that Victoria knows Emily’s true identity. She only hid it from David because her and Emily hate one another. David’s reaction? He still loves Victoria. So, that’s cool. It’s not cool with Emily who’s furious with her father for continuing to placate Victoria and allowing her to manipulate him. She tells him that she spent all her time getting even with the Grayson’s for what they did to him. David goes cold and tells his daughter that he doesn’t need her help, leaving Emily in tears.

This leads to, yet, ANOTHER impromptu meeting between Daniel and Emily, who’s sulking on her front porch. Daniel can’t believe that Emily has given up on her Dad, telling her that even he feels guilty for not visiting his Mom in the hospital. Emily calls Daniel a Mama’s Boy and tells him to leave. Daniel tells her not to give up because “the hell she put him through will have been a waste.”

Meanwhile, in the hospital, two men, posing as nurses, attack David. He fights back the best he can but quits the fight when one of the men threatens to inject Victoria’s IV with a presumably dangerous substance. That’s when Emily injects herself into the fray: she was hiding under Victoria’s bed the entire time, I kid you not. After fighting both men off, she tends to her father, who tells her that he can’t be Emily’s father because it’s “too dangerous”. This, of course, brings us back to where we started: Emily telling Nolan that her father’s right and she should mind her own business, much to Nolan’s dismay.

So…that’s about where we’re at here. Revenge will take a small hiatus and resume in two weeks. Hopefully, the writers will have started to breathe a bit and utilize their brains to give a us a nice mid-season cliffhanger going into the Christmas break. Otherwise, this show offered nothing new this week.

Matt Perri is one of those literary Ronin you’ve never heard of until he shows up and tells you he’s a literary Ronin. He’s a native Californian, a film buff, old school gamer geek, and a sports/entertainment fan. A lifelong Giants, 49ers and Sharks fan, he also covers the world of pro-wrestling, writing recaps for WWE Monday Night RAW and Total Divas at Scott’s Blog of Doom. You can follow the guy on Twitter via @PerriTheSmark as well as here at The Workprint and his own blog, Matt's Entertainment.
@PerriTheSmark
Previous The Playback – Looking Back at ‘The Hunger Games’
Next Sorkin’s Steve Jobs Biopic Leaves Sony, Targets Universal

What We Do In the Shadows Episode 2.03 Recap – Tossed Salad and Scrambled Brains

What We Do In The Shadows episode 2.02 Recap – Vanity Mirror

Do you know the old proverb? Guests and fish begin to be pungent after three …