Resident Evil 3 brings back a lot of what worked with the previous remake but is focused more on an action-driven story campaign. With a runtime that could’ve easily made for DLC in last year’s game, and a setup gearing towards the more action paced Resident Evil 4.

We breakdown what was good about the game in detail below.

You can listen to our spoiler-filled take on RE3 in the latest Gamescast episode of TheWorkprint Podcast. Available on Apple Podcasts, GooglePlay, and Spotify.

The Story Remains The Same 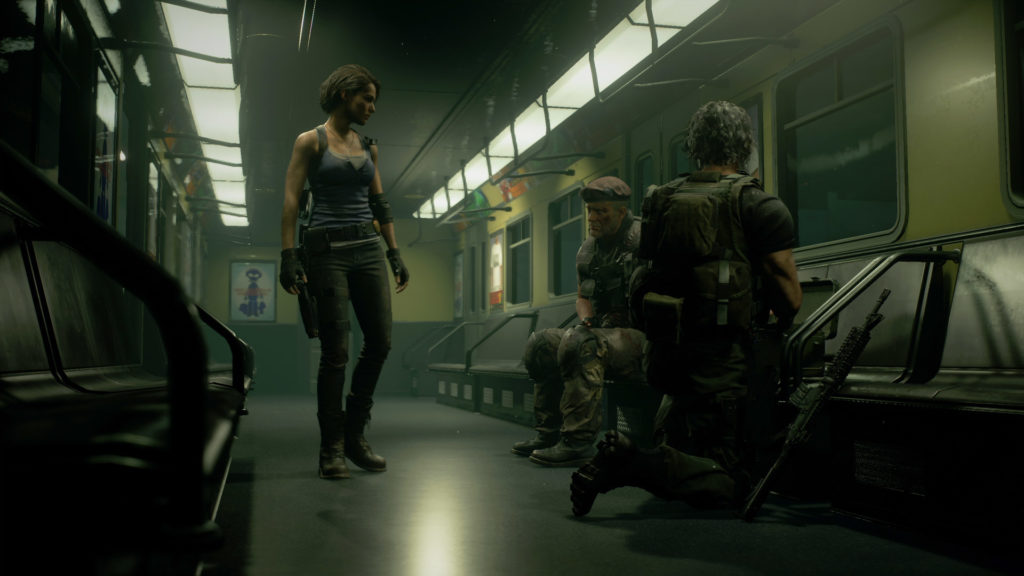 It’s the eve of the zombie outbreak in Racoon City and Jill Valentine — one the main protagonists from the original game — is still here, investigating Umbrella, after the incident at the Arklay Mountains (Resident Evil).

Needing to escape the city, she is warned by fellow S.T.A.R.S. (Special Tactics and Rescue Service) member Brad Vickers that something is wrong, as Nemesis — a super-zombie bioweapon capable of using heavy grade weapons such as flamethrowers and rocket launchers — finds and hunt Jill throughout the entirety of the campaign.

Along the way, Jill meets Carlos Oliveira, a member of the U.B.C.S. (Umbrella Biohazard Countermeasure Service), whose organization’s goals are to save as many civilians as possible, though like much of the Umbrella, features some nefarious characters with their own greedy intentions.

Can Jill and Carlos make it out of the city alive with mankind’s only hope of a vaccine? 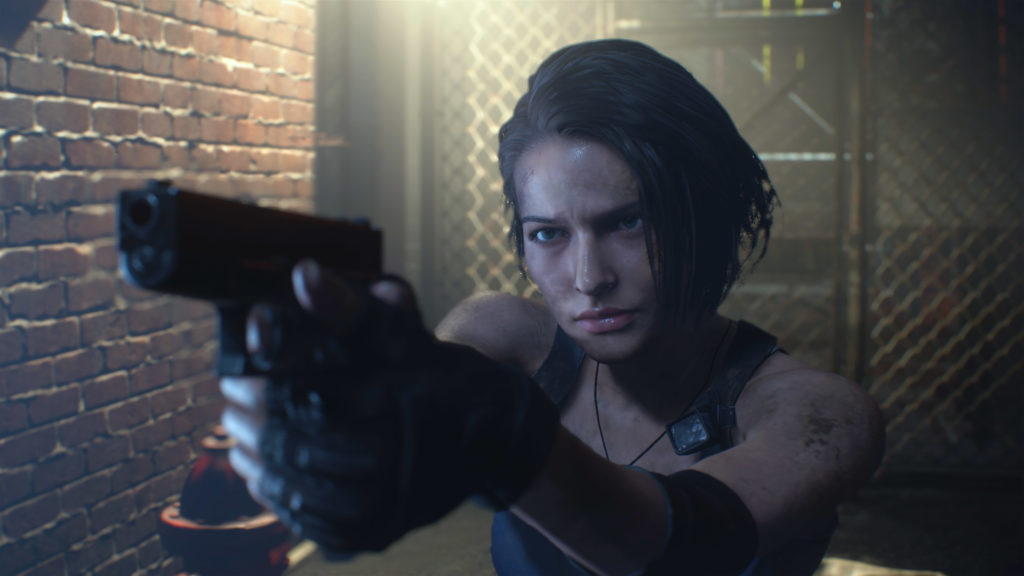 The first noticeable difference in the remake is how much of the story now focuses on Jill. Seeing much-needed character development that addresses her PTSD.

She’s hocked up on pills and having drug-addled nightmares, fearing zombification, while still investigating Umbrella after the Mansion incident despite her own police suspension. In every way a ‘super cop’ capable of tremendous athletic ability, we soon learn Jill can hold her own in a fight, as she’s thrown into heroic situation after heroic situation, many times throughout the story.

Often, Jill tries doing the right thing, which in this game, means trying to save lives by battling the Nemesis, because nobody else can fight Nemesis the way she does, and survive.

A definitive character with a sense of style — if you look at those magazine clippings, notes on Umbrella, and posters in Jill’s room, there’s a lot more characterization of Jill compared to the original. Especially, in her elaborately detailed apartment. A moment which is also,  the only breather in-game, representing Jill’s ‘world before’ as the action hits the ground running once Nemesis comes into play. 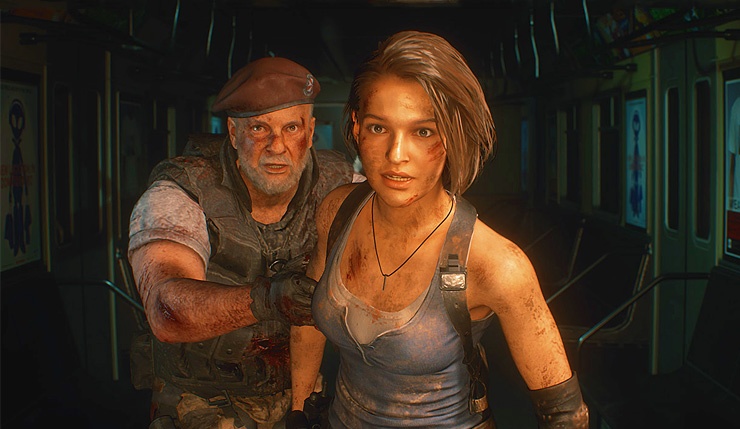 Besides the bigger focus on Jill, the remake also does away with RE3’s original branching narratives, as choices matter less as there’s only one singular ending. And unlike last year’s game, RE3 also lacks a B-story campaign, meaning the only segments to play as Carlos, comes in the middle of the game. There are also, a few omitted locations such as ‘The Clocktower’ taken away from the game to again focus less on branching narratives and more on the singular story.

That said, despite the linear narrative it’s still incredibly fun exploring Racoon City. With alleyways and neon signs and zombies whose jerky motions make it difficult to shoot in the head. The gameplay feels a lot like last year’s in terms of the zombie apocalyptic experience — though because of the more open world, now you have more options in how to handle zombies and your situation. With different difficulty levels adjusted towards your style of gameplay.

For those who find the game too easy, there’s nightmare and inferno mode, which increases the zombie difficulty, reduces resources, and even mixes up the zombie spawn patterns for a uniquely devastating experience. And though the city is small, it’s linear play makes it feel like a tiny midwestern city in the 90s. With such attention to details in locations such as theatres, pharmacies, hidden alleyways, donut shops, and more. 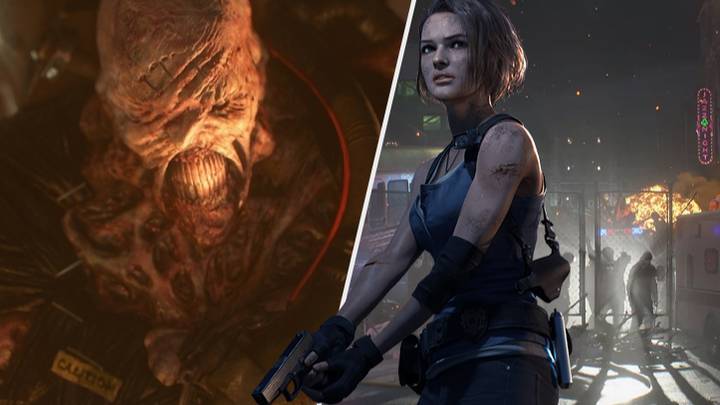 Much like the original and like Tyrant/Mr. X in RE2 there are moments where Nemesis chases you around town. However, these only occur within specific checkpoints. And though these battles are fun and Nemesis gets to use his infamous Flame thrower and Rocket Launcher, there does hit a point in the latter half of the game, where it feels like he’s less memorable and just a repeated, body horror themed boss battle. Evolving grotesquely, though never all-that imposing.

A big difference between the games is that puzzle-solving isn’t that emphasized in this one. Especially, when Nemesis is on the field, and even when he’s present, it often occurs with a lot of space in between so there’s plenty of room to dodge. He’s also less anxiety-provoking than Mr. X because without puzzles, and thus the necessary need to explore, you’re very much just trying to dodge him while trying to get to a specific location. You’re also trying to battle him in specific moments to acquire unique items, so Nemesis feels plot triggered and less surprising.

There’s also a lot less claustrophobia in this game, and if planned correctly and with good dodge timing, a lot less of an imposing threat felt unless you get yourself cornered.

So instead, you get to plow through sections of zombies or else fight Nemesis and an eventual wall of zombies. Fun with a proper shotgun or grenade, though again, much less horrifying and more action-centric. 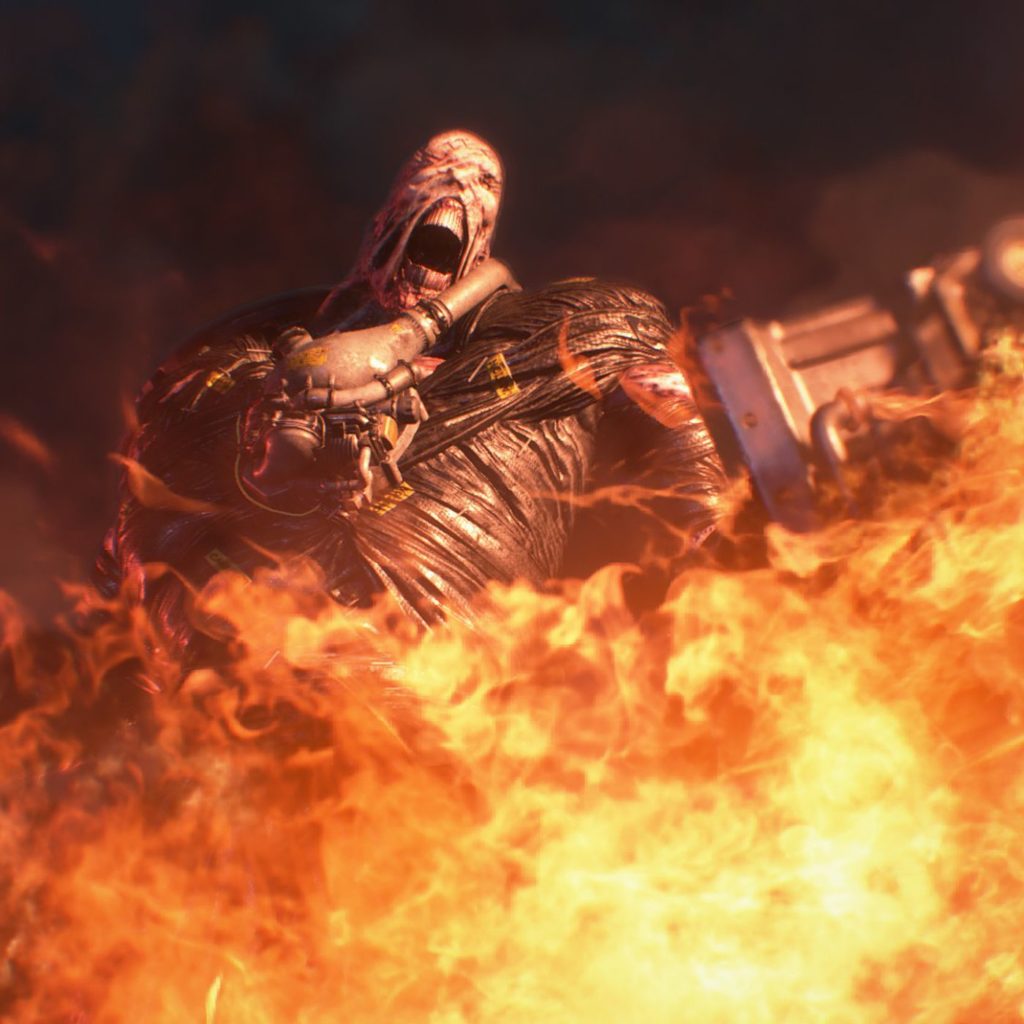 Aesthetically the game is like last year’s, with gorgeous graphics, lifelike character models, and a special focus on lighting and shading (hint: double check your shaded areas as items/zombies may be more hidden than they appear). The sound quality is also excellent witch an emphasis on every growl and moan. If you listen carefully, you can even hear the trademark Nemesis: “S.T.A.R.S.!”

Unlike the mysterious mansion or claustrophobic police station, this game gets you jumping right into the city. Dodging zombies and blowing up canisters. Again, I personally loved the sprawl of downtown, and the need for heading back to a place to check on items and supplies.

You can knife and handgun your way through most zombies with solid planning. And most monsters have some sort of exploitive vulnerability. 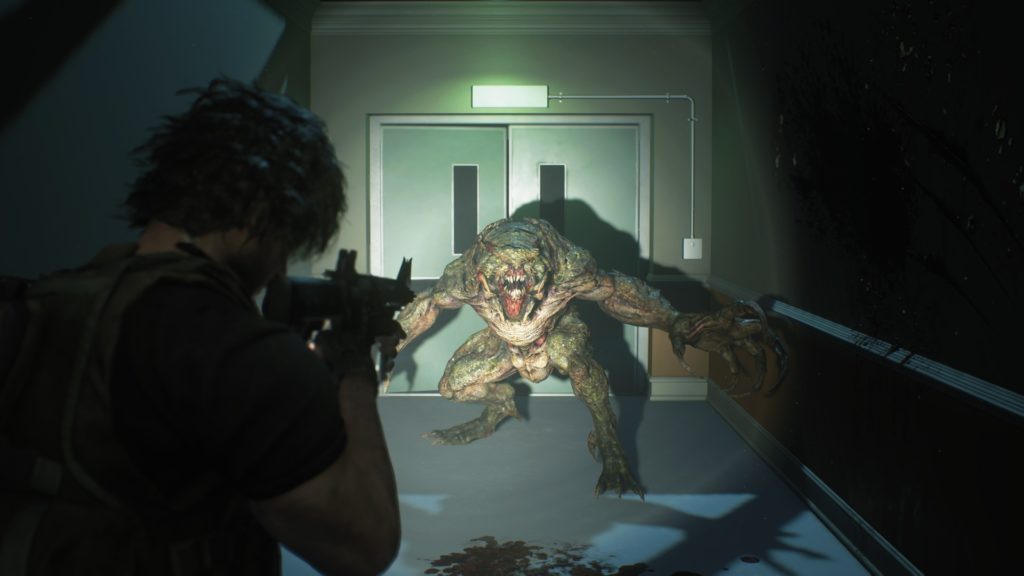 I will admit that the Hunters are probably the most annoying enemies in the game, though it’s mostly because Carlos’ machine gun does very little to stop them. 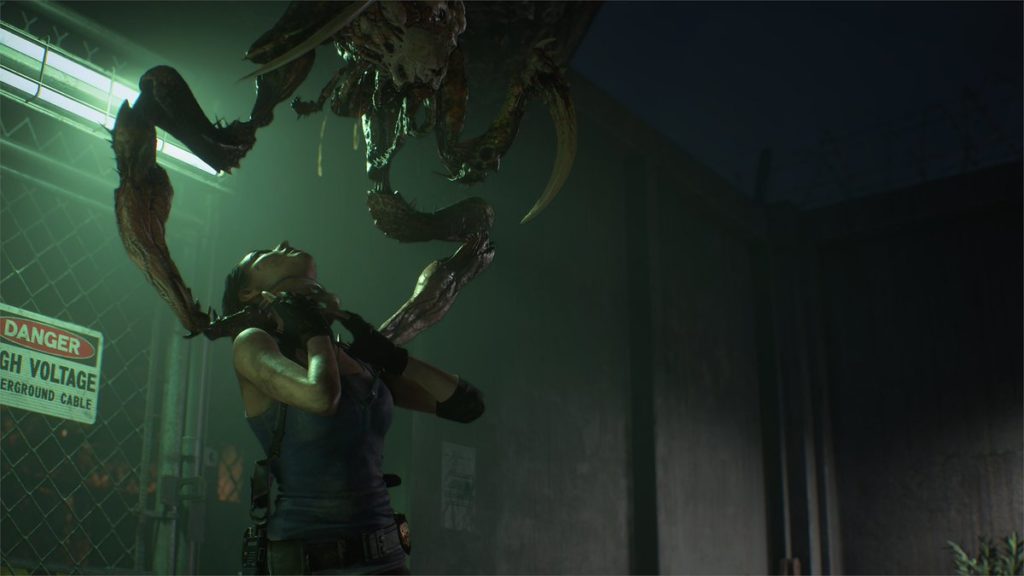 In the substation, Drain Deimos try and implant babies down Jill’s throat much like face-huggers from aliens. It’s one of the scariest points in the story.

Finally, one of the things I loved about the beginning of Resident Evil 3 is that it works-in some live-action footage on the opening days the epidemic. It’s a very cheesy nod to the original series, as back in the day of the mid 90s, live-action cutscenes were still the rage prior to CG.

The Original Live-Action intro of the First Resident Evil Game.

The New Live-Action intro of the Resident Evil 3 Remake.

How The Game Sets Up For Resident Evil 4

More action than survival horror, I’d argue RE3 falls right smack in the middle. Similar to RE4 — which fans have acclaimed as the series’ masterpiece — the game focuses on action mechanics and QuickTime dodging, while still tries to stay in the realm of horror and the outbreak elements featured in RE2.

More than anything, just like RE4, the game encourages replayability. Where some items in the unlocked shops are only unlockable once you’ve beaten the game. This includes different outfits, items, and weapons, which can only be bought by accomplishing record challenges.

This is why you want multiple save points.

Atop of this, there are actually several hints in the game alluding towards the development of an RE4 remake. Two of my favorites:

Nathaniel Bard, the doctor with the vaccine you’re trying to save in the game, hints in a note about Nemesis that he is a Tyrant who’s controllable because he’s infected with a parasite.

For those familiar with the series, parasites and not viruses, are the focus of RE4. Implying the Nemesis creation process involved someone procuring one of these creatures featured in RE4.

Atop of this, there are hints at RE4 being introduced as Nemesis, who is technically part-tyrant and part-parasite, has this uncanny ability in this game to infect people with ‘alpha-parasites’. Who when infected transform into tentacled facehuggers that strike an uncanny resemblance to the ‘Plaga’ monsters in RE4.

Between the gameplay being more action-centered, the unlockable inventory shop, and the introduction of parasites both visually and in the lore — it very much seems like the series is heading towards a RE4 remake.

5 Major Tips for Your First Playthrough

The Resident Evil 3 Remake is a lot of fun but is a very short game. Though it’s definitely replayable and sets the groundwork for the production of a Resident Evil 4 remake.