TV Talk, Harley Talk will be podcasting spoiler-filled reviews about every episode of Harley Quinn Season 2. Available on Apple Podcasts, GooglePlay, and Spotify. 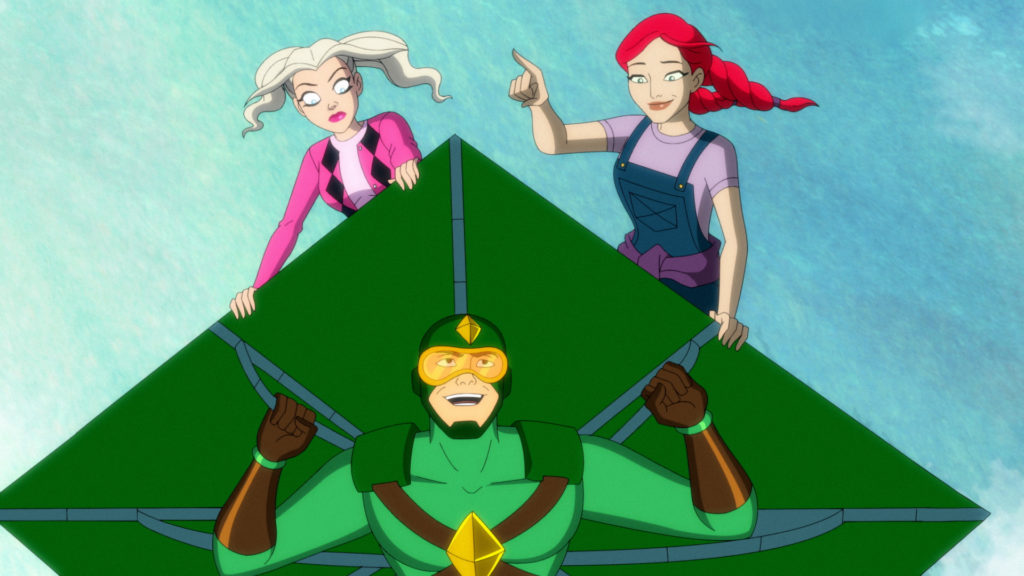 With Joker and Penguin down, Harley (Kaley Cuoco) finds the Riddler next on the list of her vengeance quest, the ‘Injustice League’ member holding out at the former Gotham University — withholding the City’s only functioning water and power.

A fun college-themed premise, this episode was some of Harley Quinn at its best. Both fun and funny, with surprises in how things go down and where the episode could possibly go next.

With a little bit of fan service on almost all fronts as well, as we get to see Ivy (Lake Bell)and Harley as hot young coeds, see Kiteman make a tiny reappearance for his ‘green with envy’ girlfriend, and get to catch a hilarious Clayface (Alan Tudyk) in the role of Stephanie: the valley speaking popular girl.

The Riddler, played by Jim Rash, unironically plays a University’s headmaster, in a not so subtle callback to his character, Dean Pelton from the TV show Community.

While the college antics go down, King Shark (Ron Funches) and Doctor Psycho (Tony Hale) are tasked on a fetch quest and have their own Mad Max styled adventure across Gotham, being chased on their own wacky adventure.

We also get to see the reappearance of one beloved character and get to see a bit of an origins story for a different one, as this episode fires on all cylinders and embraces all the fun aspects you love about the series: Laughs, Batman mythos, fan service, and adult related action content. 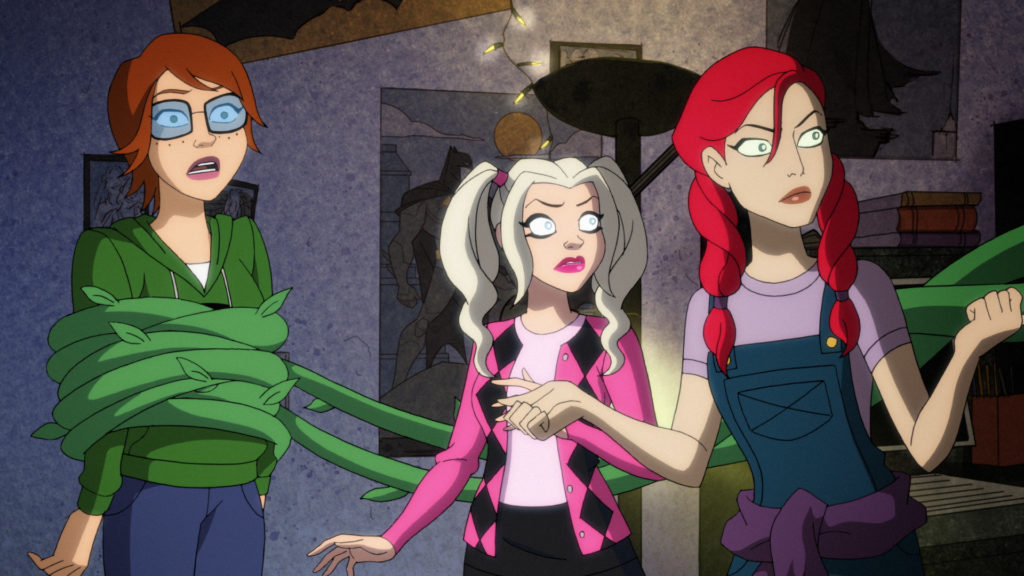 At the mall, Harley struggles with the power being out, so Doctor psycho hands her a candle made of zebra fat, as lost zoo animals are their only consistent resource.

Across town, the gang sees a digital ad for ‘Riddle U’ revealing it to be the only place with running water and power. Harley comes up with an idea to infiltrate the University as coeds, kill the Riddler, and maybe sneak into a party. Most importantly, she wants to take all their water and power.

We then cut to the University revealing that it’s heavily guarded and gated. It’s also the only location that seems to be functioning normally.

Flying high above, Kiteman makes a cameo and drops off Harley and Ivy, and after a lovely goodbye, the girls meet the campus tour guide. Harley introduces them as Heather Witherbee (Harley) and Isadora Staplebumpkin (Ivy). The skeptical tour guide finds their sudden appearance and distinct names odd, though the duo is suddenly vouched for by the most popular girl in school: Stephanie (Clayface, playing yet another very eccentric character). They’re then given the tour.

After walking the grounds and the 17 different Riddler themed hedge mazes, Ivy asks if eventually, they’ll meet the Riddler. The guide reveals that no one ever sees him anywhere despite the fact that he sees everywhere. The tour concludes.

Suddenly, a group of student protesters get arrested, as Stephanie (still Clayface) reveals only the Riddler is allowed to ask questions here. Asking permission to see the theatre department, Harley barks at Stephanie/Clayface to gather intel, as the clay monstrosity reluctantly agrees, then excitedly greets hi to a passing ‘Chad’

Harley and Ivy then take a look at the vast campus map and wonder they can possibly find Riddler, just as a man dressed as the Riddler walks by.

Harley kicks his ass and drowns him in the fountain. Before she can murder him, he reveals himself to be Jiminey Riddles, the school’s mascot.

Her makeup now smeared, Harley’s identified by the campus tour guide. She gives chase but the guide is surprisingly agile. Ivy then catches up to Harley, and together,

the duo track the guide to her dorm.

When cornered, Ivy calls out to ‘Babs’ to stop resisting, revealing the tour guide to be none other than Barbara Gordon (aka Batgirl/Oracle). Playing her ‘Waynebox’ music player to hide their conversation, they have a tiny three-person dance party (because why not?) where Babs reveals that people have gone missing at the school.

Suddenly, Barbara’s father enters the room, as Babs reveals the disgraced commissioner Gordon (Christopher Meloni) — a depressed mess who’s often crying to himself — had apparently been living with Barbara for months since losing Gotham city, his wife, and Batman.

Babs reveals she’s been tailing the Riddler, seeing people go into a Frat house but never come out. She shows the girls that she acquired three wristbands to that same exact frat house’s party tonight.  Harley steals them, as Babs complains about having to chug a whole beer — an act which she hated — to acquire those.

While all of this is happening, King Shark and Doctor Psycho go on a side quest to find a water filter for the base under Harley’s orders.

They find easily, but are disrupted by a squad of surrounding cop cars, revealed to be Two-Face’s Tommy gun wielding henchmen. We then discover why they call the gun a ‘Chicago Typewriter’, as the two seek cover. Surprisingly, they find a small car which with a few of King Shark’s modifications, the duo convert into a Mad Max themed vehicle, with King Shark sitting atop, manning a gattling gun.

After the short but epic car chase, the duo arrive at Baneton, where find several of Bane’s goons raged out on Venom. Their car is made short work of as their struggle continues.

Outside the Frat party, Stephanie admits she likes Chad. Harley and Ivy pull her aside, and after a longwinded story about nipples the size of pancakes that touch in the middle, Stephanie reveals she has a VIP wristband… from Chad.

Now inside the frat party, people do body shots and Harley jumps in to take a shot on a mini-ice luge before being scolded by Ivy. They see Riddler enter the VIP lounge and ask Stephanie to follow.

Back in Bab’s dorm, a half-naked and lazily lounging Jim Gordon comments that the best thing about chest hair is that it’s a chip catcher. He wallows over missing the Bat. Determined to do what his father won’t, Bab’s decides to take action against Riddler herself.

Back at the party, Harley knocks out the bouncer as her and Ivy sneak into the VIP. They find Stephanie and discover that the Riddler generates electricity by kidnapping guests at frat parties, and then makes them run to their death on a hamster wheel.

Discovered, Harley and Ivy beat up the surrounding guards and reveal themselves. The Riddler says he knew it was them all along given their outdated 90’s attire. He then shows them his riddle stick, and though they laugh at it, it shoots electricity and knocks them both out.

When they come to, now forcibly running on their own Hamster wheels, Stephanie cries over Chad for having broken her purity ring (Implying he had sex with him). Harley tells Stephanie/Clayface to go out and get help as he can easily slip away, but he remains crying. As he’s very much locked into character.

In a hoodie and mask, Barbra then arrives to save the day. Riddler commands his henchman Tanner to kill her, and she accidentally while tripping, subdues him. Barbara gets surrounded by goons and so she tries shooting the off-switch of the facility with a nearby gun, missing every single shot. Then, she tries tossing the gun and luckily knocks Riddler’s head, causing him to trip, and release everyone. The girls all get free (I’m including Clayface as he’s still Stephanie) and they easily beat everyone up and win the day.

Babs gets super excited and hocked up on their victory wanting to celebrate or do more! She offers to call her dad to arrest the Riddler, but Harley offers to take him away to Arkham, instead. As team Harley avoids hanging out with the socially awkward Babs.

When we get back to the mall, it’s revealed that they’ve turned Riddler into their own hamster wheel runner, as he keeps the headquarters’ electricity running.

Just then, King Shark and Doctor Psycho arrive and share all the crazy hijinks they had gotten into for the water purifier. Harley doesn’t really care or needs it anymore and destroys it. Just then, Clayface, ready to move away from the petty campus life, giddies in excitement when he receives a text message from Chad.

Back at university, Babs officially makes her own costume and becomes Batgirl.

This episode was a joy in every way. A funny college parody featuring our beloved Batman femme females, with a lot of solid jokes, and a lot of downward spiraling. If this is the direction the season’s going, I’m all up for it.