Where season one of Harley Quinn was a hilarious and over-the-top origin story focused on Harley Quinn, Poison Ivy, and friends, in season two, the party is just getting the party started. As the gang is all here. And the authorities have all gone dead or missing.

TV Talk, Harley Talk will be podcasting spoiler-filled reviews about every episode of Harley Quinn Season 2. Available on Apple Podcasts, GooglePlay, and Spotify.

Last season, the collapse of Joker’s tower caused an earthquake which destroyed Gotham city. The Joker had been killed or possibly even returned to sanity. Batman was left for dead. And the Justice League had all but disappeared.

As Harley Quinn, victorious atop the smoldering ruins of Gotham, celebrated. Whereas most villains, like the Joker, would claim Gotham as their own, Harley reveled in this sort of anarchy. Doing whatever she wanted with her gang while having no plans, despite Poison Ivy’s reluctance, to take any sort of control. As Harley relishes in a plunderous and truly free Gotham liberated from all forms of leadership.

At least, until the ‘Injustice League’.

Minus the spoilers, the ‘Injustice League’ is very much the setup for this season. As the first episode takes a funny look at responsibilities, leadership, and difficult to break the cycle of hierarchies, while still holding true to the same shock value laughs and grotesque humor that’s made the series juvenile, yet also, strangely compelling. We also get a lightheartedly blunt approach that focuses on the values of friendship, especially between Ivy and Harley, who become possible romantic lovers as hinted at this season).

Harley’s journey of self-discovery without the Joker seems to take a backseat to her growing responsibility as the gang’s boss and leader. As Ivy, Doctor Psycho, Clayface, King Shark, and Sy Borgman, have proven somewhat incompetent and unhinged, as noted by the end of this episode. It being clearly evident to the audience (and Ivy) that Harley needs to stop avoiding responsibility, step up, and take control of Gotham.

It’s a great setup for a season-long arc that’s reminiscent of the videogame Arkham City as the rogues take command of Gotham. More than anything else, the series seems prime and filled with plenty of more adventures, shocks, and twists, as a well-established character dies, as another returns, all for a promisingly engaging season. 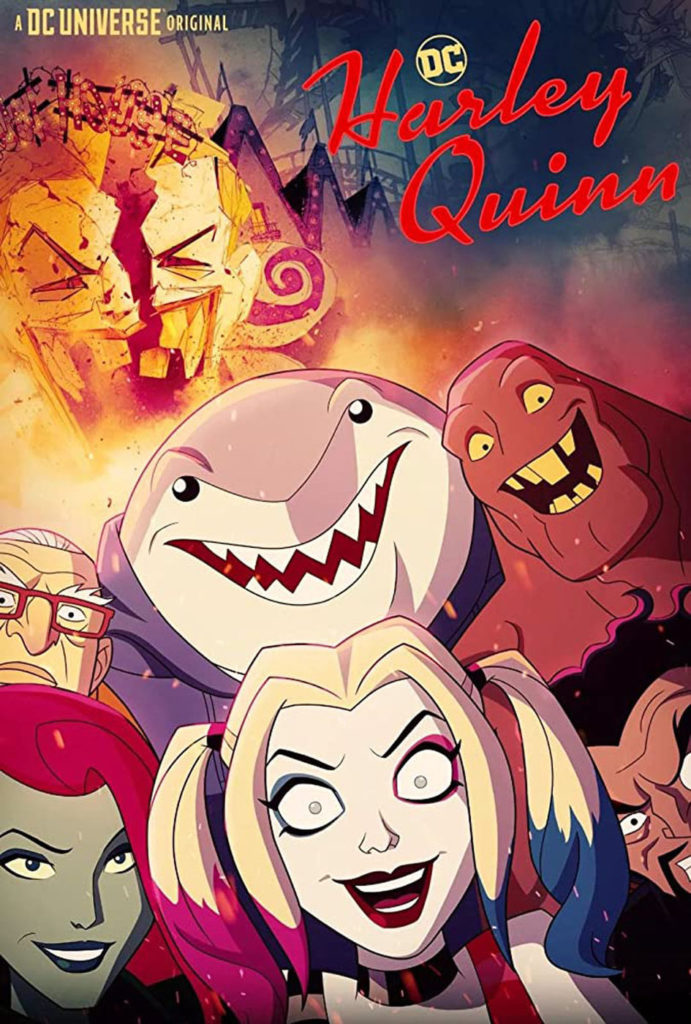 On a tiny TV set, the Harley Quinn gang sees the President declare Gotham no longer part of the United States, as anarchy fills the streets, and a man has his arms ripped off by a common thug. At that moment, Harley drives by, enjoying the leaderless anarchy as she rides a joker-faced go-kart that’s being pulled by her hyenas, Bud and Lou.

When she arrives back at her mall headquarters, she feeds each Hyena a steak, while pulling out Takashi, a Michelin star sushi chef out of the trunk of the go-kart, to cook for her crew. The others are excited, though the Sushi chef is devoid of supplies, let alone fresh ingredients, and so cooks up a raw pigeon roll. Ivy thinks maybe now’s the time to wrap this three-week party. She tells Harley with no joker or Batman, now’s the time to take over.

Suddenly, the Penguin’s goons arrive calling dibs on their mall, so King Shark bites off one of their heads, asking Takashi if they could incorporate his corpse into a rainbow roll, light-on-the-rice. Soon after, Two-Face’s gang arrives and tries the same thing. Harley decides to take Ivy’s advice and address the issue

She shows up to a henchperson bar and tells them now’s the chance to even the playing field.

“Why work for assholes when you can rise up and be your own villain?”

The Henchmen rally to her rousing speech. At a bank hold up, Two-Face is double-crossed by his owned goons, just as Ridler is disrupted on TV by his henchman ‘Craig the Inquisitor’, who also tries to be his own boss as he quits live on the air.

At the Iceberg Lounge, Penguin calls a meeting with Bane, Ridler, Two-Face, and Mr. Freeze, as the goons no longer follow them due to Harley’s insurrection. Bane wonders if they should’ve invited Harley.

At GCPD, Gordon sits by the Bat-signal waiting for Batman. Robin shows up wearing batman’s much larger clothes, sharing that the Dark Knight hadn’t returned since Joker tower had fallen. He then, in an adorable child sounding attempt at a guttural growling Batman voice, declares himself the new ‘Batman’, before Gordon hits him with a plastic bottle of whiskey he’s drinking.

Harley returns to her crew, delayed, having to battle several question-based villains. Ivy sidebars with her, telling her that this was her chance to take the city but now,  instead of five assholes, there are a thousand little assholes trying to rule. She also, in a typical Ivy matter-of-fact fashion, rubs in an ‘I told you so’ to her bestie.

Harley then gets an invite to the injustice league meeting. She attends the meeting at City Hall revealing the injustice league is just former Batman rogues: Penguin, Two-Face, Bane, Riddler, and Mr. Freeze. Who all sit in fancy swivel chairs, though Bane and his giant frame are given a tiny folding chair. Two-Face declares they’d like to restore the natural hierarchy of things: supervillains, sidekicks, goons that went to Harvard, and then goons.

Harley defends that this is the chance to do something new, but the others want to divide the city into their own territories. They offer Harley the tiny little bad part, which she denies, and so Mr. Freeze freezes her into a giant ice cube.

On the streets of Gotham, people stab each other. Gordon looks on from inside the GCPD as the cops hideout as America has turned its back on Gotham. Gordon tells the cops they’re going to retake the town, just as Two-Face arrives and declares this police precinct his, then shoots two cops in the dick.

The cops choose to surrender leaving a gun-ho Gordon alone as he flees on a quest to go and find Batman. Driving away on a flatbed truck that holds the bat signal, singing that he’s a good cop, and still hoping Batman arrives. Suddenly, while on a bridge, the truck is overturned by caltrops, and Gordon is mugged by the very cops he just left behind. Self-declared ‘Bane Boys’ now, as things keep changing quickly on Gotham’s crazy streets.

The bat signal is broken in the struggle. Hopeless, Gordon tosses his badge into the ocean.

Penguin is ecstatic the Iceburg lounge is popular again. As, Harley is still on ice as his decorative centerpiece. A French waiter offers a toast, which is obviously Clayface, who is unable to dumb down his ‘ACTING’. As Doctor Psycho, with his tiny head, stands on the shoulders of King Shark, in a single black suit, as the gang ‘tweet tweets’ the signal towards Ivy, who plays cards and refuses to reply the stupid starting sign.

The plan begins. Sy Borgman takes to the piano and vents gas from his wheelchair during a rousing speech where Penguin takes credit for putting down goon rebellion. The plan takes too long so Sy stalls by singing Happy Birthday, and the gang extracts the giant ice cubed Harley but is caught mid-heist and runs. 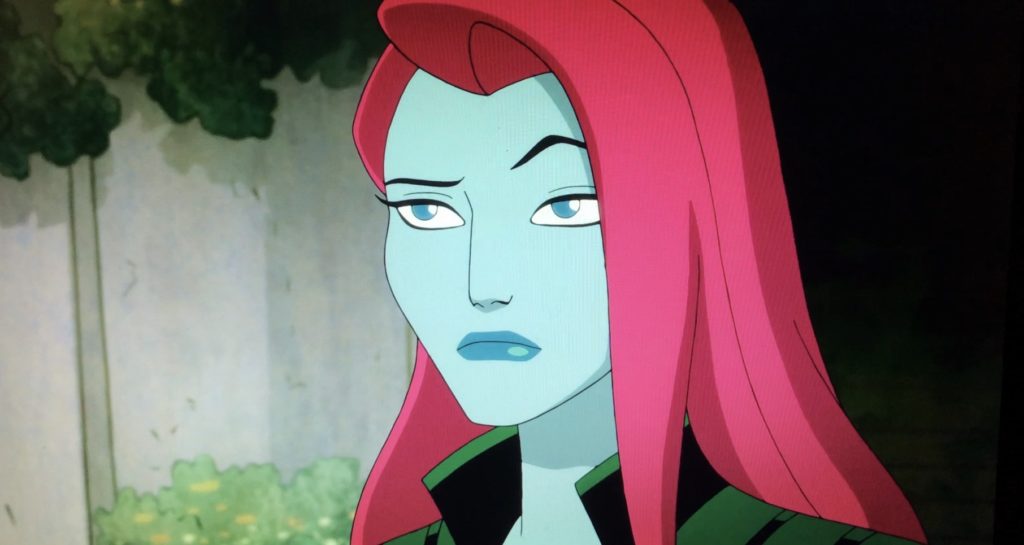 Ivy stresses that it’s important not to rattle Harley as she’s fragile, just as the gang accidentally bangs the ice block against the wall, murdering a waiter.

Though the impact cracks open and dislodges a part of the cube. Harley, able to speak again, tells them to get them the fuck out of there. The gang runs taking out goons along the way, with Sy Borgman, in his wheelchair, carrying Harley. Eventually, they crash, and Harley, now free of the ice, is confronted by Penguin, who while rubbing in his victory over her in a rousing speech up toward face, has his nose bitten off.

In the battle, Harley breaks her bat. Though she still finds a way to approach Penguin his from behind, and with the bat handle, stabs him in the neck. Making him bleed out.

Back at home, Gordon tells his wife he’ll start a new department at his home. Husband and wife cops! Barb replies she wants a divorce.

Back at home again, The gang reluctantly reveals that Harley’s been on ice for two months. Everything in their life was a disaster. Clayface, and his ‘heist’ plan developing his Francoise waiter character, was their last resort – which worked. Albeit months later. When all the goons and benches returned to working for their bosses.

Ivy shows Harley the Injustice league, carved up the city into ‘New Gotham’ where all the city is divided now into their territories. Harley declares she’s going take them all down. That Gotham should’ve been hers.

Later, at an army triage tent stationed by Gotham, a doctor says they found a survivor in the rubble. When they unbandage him it’s revealed it to be Bruce Wayne.

The first episode of season two kicks things off not with a bang, but with a smoldering ruin. It’s definitely intriguing and it’ll be fun to see how Gotham is remade and reshaped this season. So follow along if you can!

You can watch Harley Quinn season 2 on DC Universe.

@theworkprint
Follow
Previous article
All The Moments You Need To Know in ‘The Magicians’ Series Finale
Next article
‘Resident Evil 3’ Remake Review: Short but Encourages Replayability