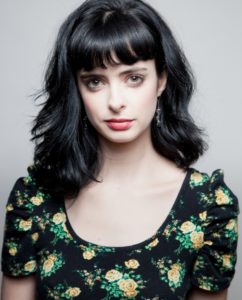 Update (12/5/2014): Marvel has confirmed the casting of Krysten Ritter in Marvel’s A.K.A. Jessica Jones. The series will follow Jones’s career after a tragic end of her short-lived Super Hero stint. Viewers will find Jones rebuilding her personal life and career as a detective who gets pulled into cases involving people with extraordinary abilities in New York City.

“Krysten brings both the hard edge and the vulnerability the role demands,” said Executive Producer/Showrunner Melissa Rosenberg. “We can’t wait for fans to see her in action, coming to Netflix in 2015.”

“Krysten Ritter has the type of range, spanning the comic to the tragic, that makes for the stuff of the best Marvel heroes,” said Jeph Loeb, Executive Producer/Marvel’s Head of Television. “As Jessica Jones, Krysten will bring one of the most beloved new characters of the past decade to life in a way we know will delight her longtime fans and introduce her to many more.”

Original Story: Deadline is reporting that Marvel has tapped Krysten Ritter to play Jessica Jones, a former superhero suffering from PTSD who decides to open up a detective agency.

Jessica Jones is the second of four dramas headed to Netflix from Marvel. Melissa Rosenberg will head the 13-episode series.

While there is no official word from Marvel, the casting of Ritter, if true, reminds me much of Chris Pratt. An actor with a comedic background that could be a strong fit.

Ritter has starred in Breaking Bad and Don’t Trust the B**** in Apartment 23.