This week’s episode of Pretty Little Liars exemplifies the dichotomy between Spencer and Hanna’s relationship this season, and Emily and Aria’s. While Spencer and Hanna are tracking down leads on Charles, and finding Jason’s doppelganger, Emily and Aria are lying on Aria’s bed talking about prom dresses and dates.

“FrAmed” begins with all of the Liars, plus Ali, at Aria’s house watching the local news announce that Charles DiLaurentis kidnapped the girls and also probably killed his own mother. Ali starts reminiscing about a past birthday party when she was five where she met her brother masquerading as her cousin, and he let her eat his frosting. A kid who offered her frosting could not possibly turn out to be a monster, right?  Hanna can’t handle Ali’s pity party and tells her to suck it up because no matter what nice things Charles did at that birthday party, he still kidnapped and tortured them.

At The Brew, Mr. Clark Warbler tries to convince Aria to attend the art gallery that will be displaying her photographs. Aria explains that her mom doesn’t think it is safe because of the whole Charles thing, and he begins asking a slew of suspicious questions such as did the girls know Charles would be in the creepy arcade. Since part of Ezra’s job as owner of The Brew is eavesdropping on his customers, he slides next to Aria when Clark leaves saying “You just met the guy, he sure was asking a lot of questions.” Yes Ezra, most people ask questions to learn about others instead of secretly spying on them.

Aria is able to convince her mom to let her attend the event once Det. Tanner assures Ella that Rosewood’s finest will be there to guard her daughter. Later, Aria invites Emily over for a fashion show and while searching for Aria’s skull covered jacket, Emily happens upon a dress Aria has purchased for prom:

Aria: You know that feeling when the perfect dress just speaks to you?
Emily: Yeah, I think your wardrobe speaks a lot louder than mine

Aria’s dress spoke to her alright, in parseltongue, which the snake on her current shirt translated for her. Next, Aria asks Emily to the prom, so they can slow dance together, but Emily turns her down, finally admitting to her budding relationship with Sara.

The two lay down on Aria’s bed and discuss the Sara/Emily kiss, and Aria is wearing her boots on her bed. WHO DOES THAT! That is one of my biggest pet peeves, and Aria, I will never forgive you. Aria pouts about having to go to prom all alone, but Emily reminds her that they are no longer living in 1912, women can ask guys to dances now. What a random year to pick, I mean, yes it was before the 19th Amendment was ratified, but that date is still way too far in the past to assume women were free to do what they pleased. It does the trick though, and  Aria declares that she is an independent woman, and will go stag to the prom.

This plan seems to evaporate though a mere two hours later, when she asks Ezra to the Rosewood High prom. Doh! Like I said last week, ARIA NEEDS TO STOP TALKING! Apparently Ezra does have lines he won’t cross and attending prom at a school he used to teach with an underage student that he used to date is one of those lines… he says no. Aria is batting 0 for 2 in the prom date department tonight.

Hanna tells her mom that she doesn’t want to accept the scholarship she received last week because it most likely came from Charles. Ashley can’t understand why Charles would help Hanna pay for school if he is indeed so evil, to which Hanna explains  “A gives, so that A can take away.” Man, I feel like I could write an entire recap consisting just of Hanna quotes. The only thing that would make this line better is if Hanna said ‘taketh.’ Ashley is adamant that they will not give up the scholarship money because Hanna deserves college after all the have been through. There are so many niche scholarships out there in the world, there must one for former kidnapped teens that Hanna can apply for right? 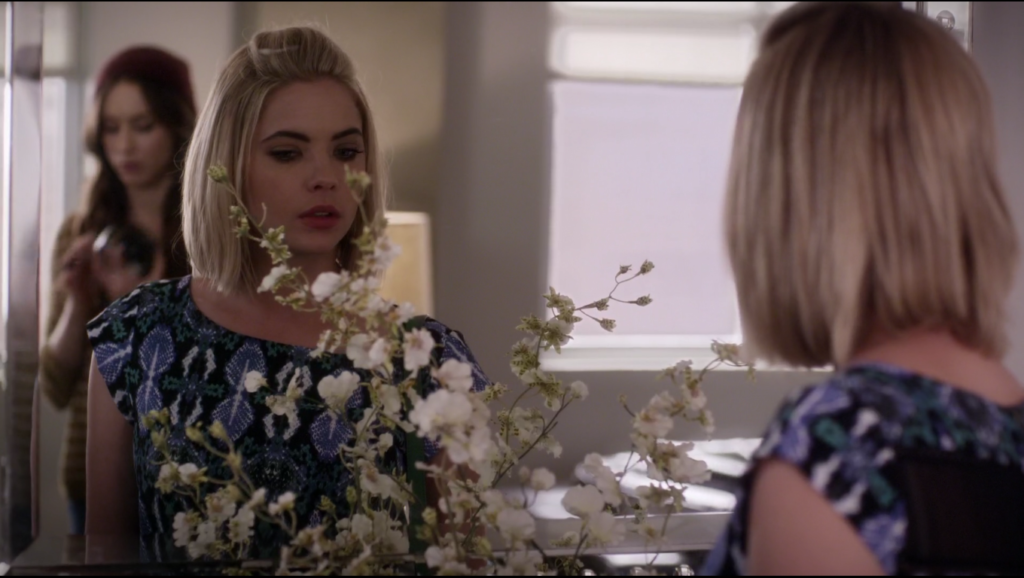 Hanna heads over to Spencer’s house to try to devise a plan. They decide to go to the Carasimmi group’s office first hand to return the money which will get them through the front door. When they arrive at Carrasimmi Group, Hanna requests bubbly water from assistant, to make sure the two teens look normal. As the resident high-class liar, she informs Hanna that in a highly respectable office like this, it is called sparkling water. Spencer starts snooping around, picking up a magic-eight ball from a desk and Hanna goes full on paranoid. She is convinced that the mirror hanging on the wall is a two-way glass window and she writes this all down on a notepad for Spencer to read because she is also convinced that the room is bugged and starts crumpling the paper to make the people listening in think that there is static in the room. It is so proactive, and yet so unproductive. It was just so Hanna. As she begins to start a paper ball fight with Spencer, Rhys Mathews, aka Jason’s doppelganger, enters the office.

Hanna tries to return her scholarship money but Rhys denies the request saying that doing so would “kinda undermines the concept of charity.”  Um no that doesn’t undermine the concept of charity, it just makes you sound like a self-righteous, privileged doucheface. The girls are unable to obtain any viable information from Rhys, so Hanna finally asks if she could get Mr. Carassimi’s contact information to thank him personally for the scholarship. While Rhys won’t disclose his employers identity, or verify that his employer does indeed have an e-mail address, Hanna uses this opportunity to pull out her phone and take a covert picture of Rhys.

When the two arrive at Aria’s art gallery, Hanna is bursting to show the other girls the photo of the Rhys, but  Spencer tells Hanna to cool her roll and let Aria have this one night to celebrate her accomplishments without any A drama. As soon as Emily chastises them for being late, it is Spencer who immediately spills the beans. Hanna shows Emily the picture, but because lesbians can’t tell the difference between blonde white guys, she thinks it is just a picture of Jason. 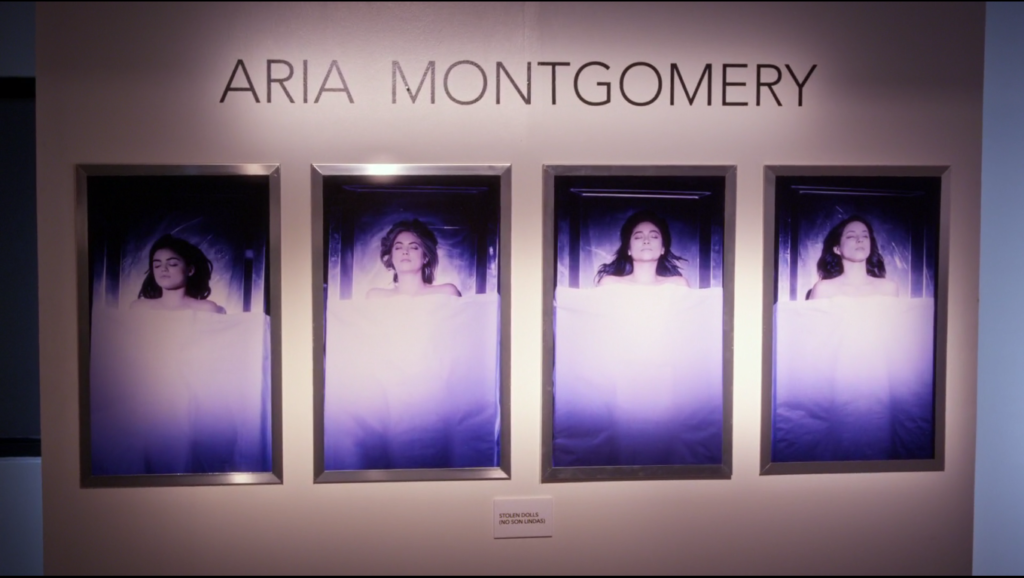 Rhys’s picture isn’t the only photographic surprise of the night. When the finalist’s photos are revealed, everyone in the gallery is aghast to find that Aria’s creepy doll pictures had been replaced with pictures of the Liars lying on cadaver slabs in the dollhouse. The art show comes to a screeching halt, and Rosewood’s finest come to investigate the crime scene. Det. Linda Tanner explains that while A may have pulled this stunt to scare the Liars. She believes that Charles was sending her the message that he can uncover all of her deep dark skeletons, such as Tanner growing up in a bilingual household. Ella could give a fuck about Tanner being targeted and goes into full on Momma Bear mode as she berates the detective for letting Charles pull this shit literally right under her nose.

Ella doesn’t stop there, she heads over to talk to Ashley Marin about the events of the night. Apparently the Rosewood PD did not find it important to notify the liars’ parents that pictures of their kids while drugged and kidnapped were put on public display. Ella and Ashley finally realize that the police are not doing enough to protect their daughters (understatement of the millennium), and they need to take matters into their own hands. Oh man, this may be my new favorite dynamic duo.

After the whole ordeal Ezra comes to sit with Aria and she goes into a long monologue about imagining she was in Iceland while on the cadaver slabs, and how she was so cold, and is still so cold. I don’t know if it is because the speech was ridiculous, or because it was Aria delivering it,  but it did nothing for me emotionally. I was half expecting Ezra to cozy up to Aria and say “Well I can warm you up baby.”

Spencer, Emily and Hanna are on their own quest, and follow Rhys’ car, which is parked outside the art gallery, to an abandoned doll factory. They then spot Mr. Warbler heading into the factory a few minutes later.

I guess I should mention that Ali did some things in this episode too.  Ali brings homemade soup to Lorenzo’s apartment to help heal his gun-wounded arm. She offers to stay with him  and do his laundry, but as soon as the officer falls asleep, Ali steals his police key card. She heads to the precinct where Det. Tanner catches her snooping.  Ali declares “I didn’t touch anything!” while literally holding up an evidence bag containing a baby rattle. I very rarely enjoy Ali, like ever, but man that line just killed me. I love it. 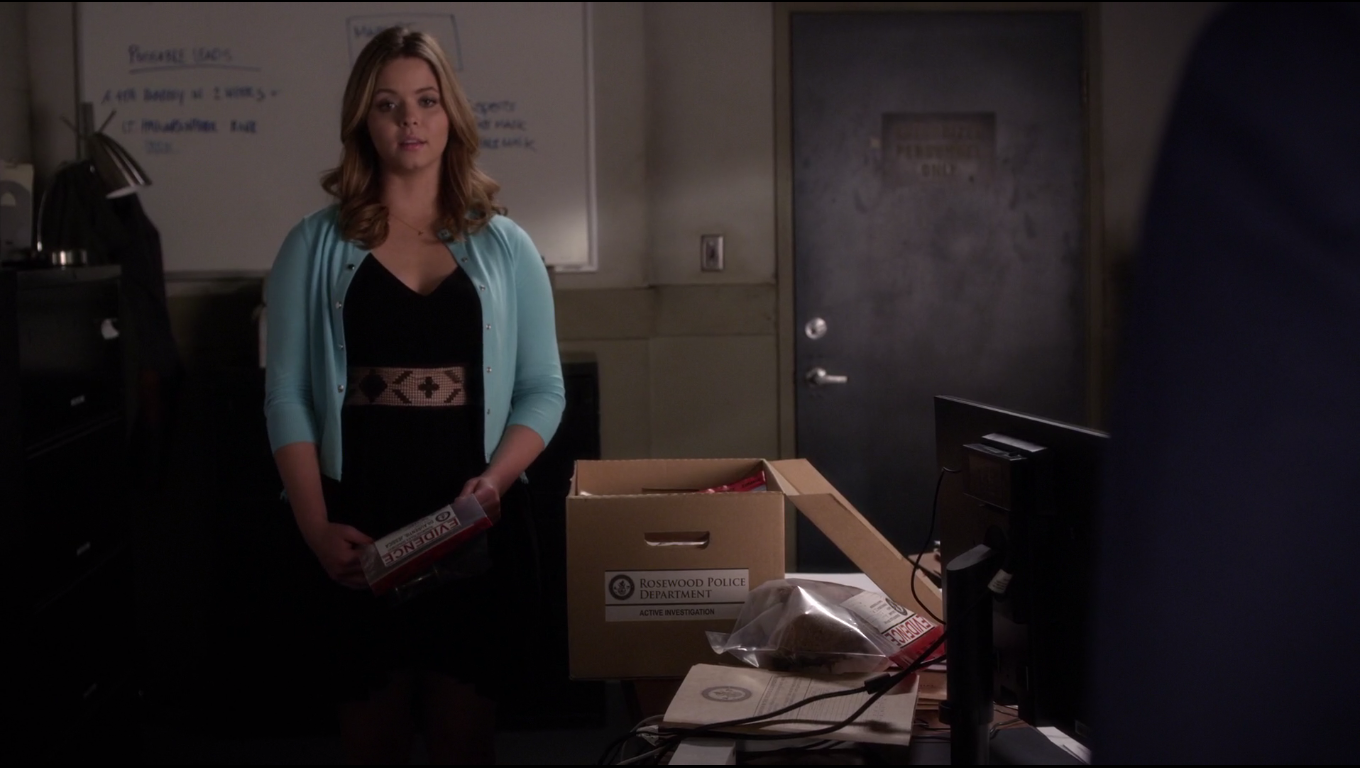 Oh, also Red Coat is back! Remember Red Coat who they first thought was Melissa, and then CeCe Drake, and also A, then she dropped off the face of the earth. She is back and is A’s chauffeur to prom.

Hanna Quote of the Week

Hanna: You know, I’ve always wondered about college credit. Is that when you show up for class and they give you some money back? Because I could really be into that.

Oh Hanna, wouldn’t we all?

@theworkprint
Follow
Previous article
Going Gold: ‘So Many Me’ Review – For the Child In All of Us
Next article
‘Zombi’ Shambles Onto Xbox One and Playstation 4 August 18