By 11 years old, I was fully enthralled with the world of Pokemon. From the video games to the cartoon, I couldn’t get enough. All I wanted in life was to be the best that no one ever was. Then, imagine the pure excitement coursing through my body when Pokemon Stadium was released. Finally! I could experience the battles in 3D as they appeared on the show. Now imagine my disappointment at actually playing Pokemon Stadium and realizing what a mediocre (*editor’s note: at best!) game it turned out to be.

Well, here we are again, only this time I’m pushing 30 with an 8 year old that shares my obsession for Pokemon, and the new Pokken Tournament advertises itself as a true Pokemon fighting game. Has it finally been accomplished or will this game leave me feeling like I’m blasting off again? Find out as we travel across the land searching far and wide… (*editor’s note: I see what you’re doing but come on… it’s a review. Be more professional.)

Pokken Tournament is the latest attempt at bringing everyone’s favorite pocket monsters (that’s right, Digimon, I said it) to 3D gaming and away from its RPG roots. To bring this fighter to life, The Pokemon Company has decided to choose Bandai Namco as its starter type and co-developer. The result is a game that feels like a “best of” fighting game, taking cues from Bandai Namco’s own Tekken Franchise, sprinkling in some Street Fighter and Marvel vs Capcom, while wrapping it all up in a Pokemon skin. What, at first, feels like a game with an identity crisis finally clicks and is one of the deepest, accessible, and fun fighting games I’ve ever played. 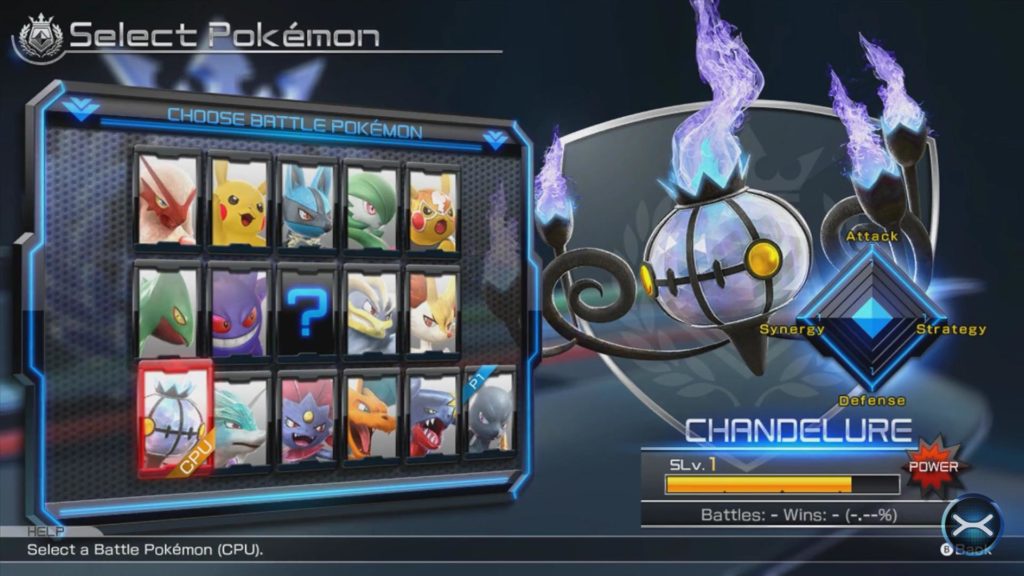 Battle Trainers (that’s you) start each match by picking one of 16 “battle” pokemon that you’ll be directly controlling. Next players select a “support team” of two pokemon from 14 possible support teams totaling in over 40 pokemon making an appearance in this game. These “support teams” act very much like the assists you would find in the aforementioned Marvel vs Capcom franchise, popping into matches to either attack  your enemy, debuff them or buff you. The final step, before we get to live our fantasies of what is essentially pokemon dog fighting, is selecting a “cheer” type. Guiding you through this experience is Nia, a veteran Battle Trainer, and she’ll cheer you on granting you various benefits in-between rounds.

Matches begin on a 3D plane in the “Field Phase”, where gameplay feels similar to the Tekken franchise, using ranged attacks to keep your opponent at bay or rushing them down to land melee attacks. When a strong attack is landed, it switches to “Duel Phase”, where pokemon battle on a 2D plane until a lethal combo or throw is landed, sending you back into “Field Phase.” The constant switching back and forth between “phases” is Pokken Tournament’s most unique feature and one that adds extra depth. Often times I found myself preferring to keep my distance and using ranged attacks in “Field Phase” but taking a rush down approach in “Dual Phase.”

While the pokemon are busy pimp smacking each other into a visit to the Poke center, two different meters are building. Your “support gauge”, which once full allows you to summon your pre-selected assist pokemon, and your “synergy gauge.” Activate the “synergy gauge” and your pokemon enters a super state allowing it to land more powerful attacks and giving the player the option to activate one more time for a signature synergy attack. If landed, these attacks result in some incredible attacks and animations. Watching Pikachi Libre climb the top rope of a wrestling ring, pump his fist as he screams “PI-KA-CHU” is the purest form of glee I’ve felt in a video game in a long time. 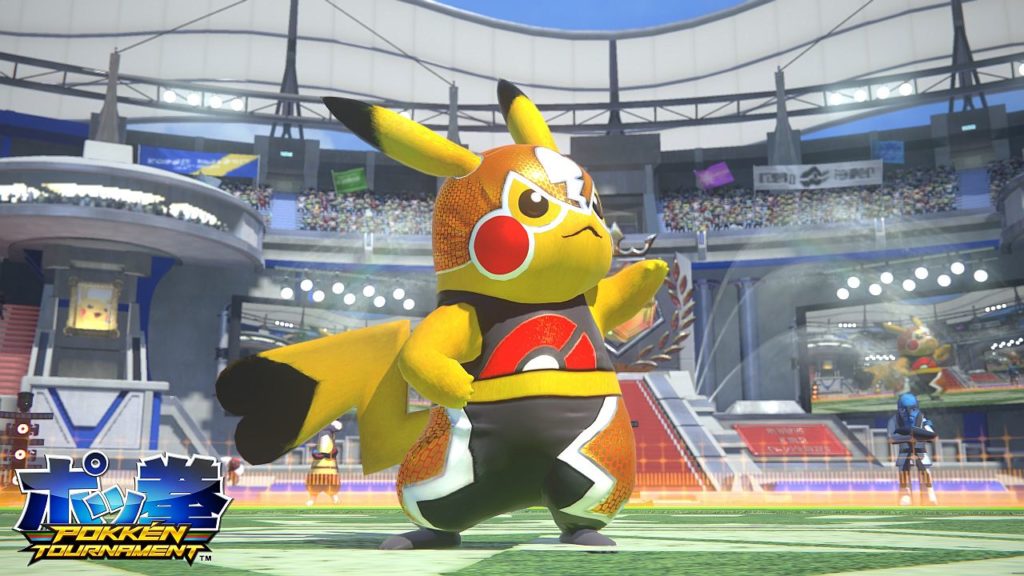 Speaking of Pikachu Libre, the roster of “Battle” pokemon is made up of a mix of favorites from across the different generations. After playing as every single one, I found it represented a great variety of play types and fighting archetypes. Every single pokemon was fun to play as and I can’t imagine a player not finding one that suits his style. On top of playing well, each pokemon looks exactly like their cartoon counterpart.

Pokken Tournament as a whole, is a very pretty game, with an art direction that looks like it fits in the cartoon universe. While not as crisp or clean as say Street Fighter V or even Tekken 6, the game does a great job of pushing the technical boundaries of the Wii U without sacrificing performance. Even when playing on the Wii U Gamepad, I found it to be a very pleasant experience. It does, however, make me long for the day when we can see Pokemon rendered on truly powerful hardware.

A knock that could be made against Pokken Tournament is that there are a lot of mechanics going on in this game (*editor’s note: Thanks for pointing that out, we didn’t notice the 800 gauges mentioned earlier). Thankfully, the game recommends players start in the training mode, which not only teaches beginners the many systems at play but also teaches them the fundamentals of fighting games. My son was quoting the “attack triangle” of block beating normal, normal beating grab, and grab beating block, to me while we battled. Even with all of the deep mechanics, it is still possible for someone to pick up a controller, button mash and have fun even if that doesn’t translate into success. This is exactly what fighting games should be striving for.

Multiplayer is handed expertly both locally and online. Locally one player uses the gamepad so that the perspective in “Field Phase” is always over their shoulder and the second player uses a pro controller and the TV. The biggest tests of an online fighter are that matches were found quickly and the net code resulted in no noticeable lag. Pokken Tournament passes both with flying colors, a feat that is much more impressive when you consider Nintendo’s relatively young online network. 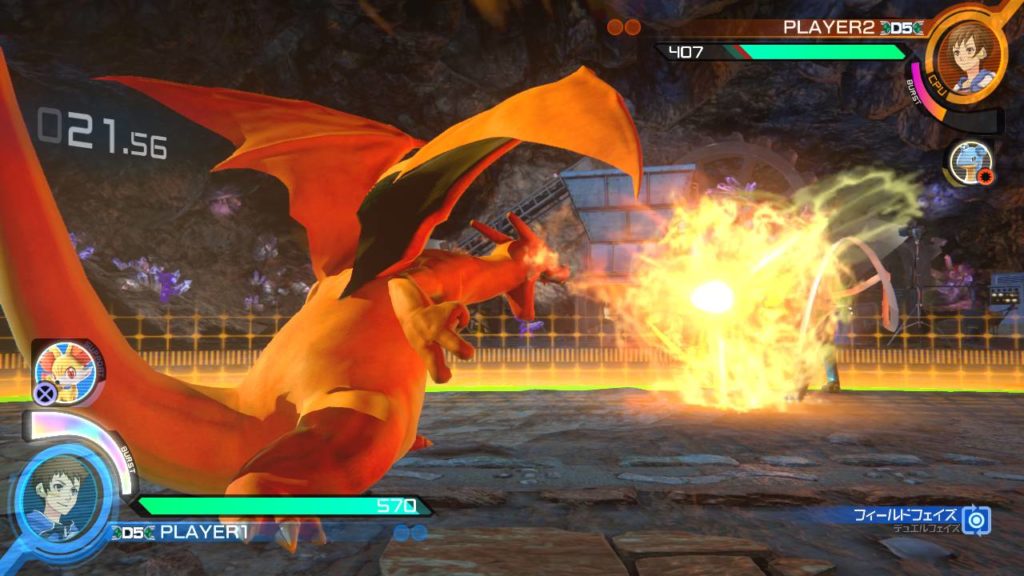 The biggest surprise to me was the single player experience of Pokken Tournament. Bandai Namco have translated the normal “journey” one takes in the main series Pokemon games into a fighting campaign. As a new trainer you start in the lowest of five “leagues”, with ranking matches. This is the games equivalent of walking around the world battling random trainers to level up. Once you achieve a high enough rank, you enter into an 8-player tournament, which feels very much like battling the trainers in a gym. Once victorious, you have a promotion match against that league’s champion to move on to the next league, which again feels very much like battling a gym leader to earn a badge. They’ve someone how made the concepts of “Battle Trainers” and these leagues feel very much like they belong in the Pokemon universe.

Pokken Tournament is not a perfect fighting game by any means, which fairly complex mechanics and visuals that don’t meet the bar set by their modern peers. What it is though, is a near perfect Pokemon fighting game, that’s fun, deep and has more charm than it has any right to. Also, it has 100% more Pikachu in a wrestling outfit than any other fighting game out there and, at the end of the day, isn’t that all we really need?

Pokken Tournament was reviewed on the Nintendo Wii U.

Previous article
‘Shadowhunters’: Meet The Inquisitor
Next article
‘Dancing With the Stars’ Premiere: Ding Dong, The Len Is Back