‘Dancing With the Stars’ Premiere: Ding Dong, The Len Is Back

We are back with the Dancing With the Stars premiere episode of Season 22 (yes – twenty-two!!!), and all of the glitz, glamour, and yes, even everyone’s favorite old-man grumpy judge, Len Goodman, are back once again!!! Goodman, who took last season off to take a long, extended nap and watch a “Murder She Wrote” marathon, has returned to the ballroom once again, to give his very special style of judging to the panel. The crazy Bruno Tonioli and the always Horny Carrie Ann Inaba are also back, as is the lovely co-host Erin Andrews. And, of course, the man who keeps this 3-ring circus all together and who remains my TV-host crush forevermore, Tom Bergeron. This season seems to have a lot of interesting characters, some great backstories that will make people get out the tissues and start with the waterworks early on, and some really good potential dancers. So what are we waiting for? Let’s get started ……..

Most of us know Kim Fields from the classic and somewhat lame TV sitcom “The Facts of Life”, where she played Tootie. Others know her from the more recent “Living Single”. And some are saying: “Who the hell is this person?” They did a Cha-cha, and both worse red shimmery outfits. It was a very good dance for the first time ever, and the first couple of the night. Bruno said: “You can blow my sax and whistle anytime!” Not sure if he was talking to Kim or Sasha there on that one. Awk-ward!!! Tom Bergeron responded with the witty: “… and we’re off!” Scores were 7/6/7.

Paige is a Pro Fighter for the UFC, and that’s really all I know about her, because that is what it said on my TV screen. They did the Foxtrot, and Mark was in the weirdest suit jacket of all time, not sure what costumes department was thinking with that choice. He looked like a florist shop vomited all over him. She moves very well. Horny Carrie Ann couldn’t control herself: “What you put out was fantastic!” Calm down lady. Len thought they did a terrific job, and seemed to be on happy pills with the first few dancers of the night. No worries though. His normal grumpy old-man self would emerge soon enough. Scores were 7/7/7.

Flutie is an NFL Quarterback Legend, most famous for his time with New England, so they did Neil Diamond’s “Sweet Caroline”, which is the song that Boston sports fan play at Fenway Park during Red Sox games. We can tell already from rehearsal footage that Flutie is a perfectionist, telling Karina: “I hate not being good at something.” Well, you’re gonna do lots of hating on this show then, because you kind of cant dance. The man has no rhythm. But a great attitude. Len said: “It wasnt exactly a diamond performance”, referring to Neil Diamonds name and making a sad attempt at humor. Carrie Ann pointed out that America loves an underdog. Scores were super low and embarassing at 5/5/5. Yikes!!!

She is from both “Full House”, and now “Fuller House.” As someone who found that show to be insanely stupid, I can only tell you that she played someone named Stephanie Tanner. Also, just a sidenote, Im guessing that Keo had absolutely not a clue who this person was or had never sat through an episode of “Full House.” I could be wrong, but this strikes me as a show that white people watch. (Not all white people – just ones that arent me.) Also, some guys find her to be hot. Whatever. She seemed okay, but a bit annoying to me. They did a Tango, and both wore purple. She also moved well, but the judges were obsessed with her oddly moving head. Len: “Strange things were happening with your head.” Bruno called it “alluring!”, and scores were 7/6/7.

I think we all know who Giraldo is, unfortunately. TV host /reporter / Fox “News” Correspondant (Im sorry – I have to put the word news in quotes when it comes before the word “Fox.”) He is 72 years old. Edyta is one of the original pro-dancers on the show, who is making a reappearance this season. Their dance was the … oh never mind. It doesn’t matter. Edyta danced and Giraldo WALKED across the dance floor, back and forth, with a creepy game-show host smile across his creepy, porn moustache the whole time. Then he smiled with his mouth wide open like Guy Smiley from “Sesame Street”, as he received his commentary from the judges, which was quite brutal (and accurate.) Bruno said: “You were starring, you were not dancing. Maybe you better dance next time. ” Len: “For you, dancing is a work in progress. Youre not there yet.” Backstage, when Erin asked him what he thought of the comments, his response made even less sense than his dancing. “They say with a dancing bear, you dont ask how well he dances – it’s that he dances at all.” Erin: “What?” Exactly. I think this man is on some serious qualudes or something, maybe laughing gas. Maybe it’s whatever they feed them over there at Fox “News.” (giggle) He kept laughing like a lunatic for no reason. Scores were harsh at 5/4/4. WOW!!! I’m not sure I recall the last time someone received a FOUR, never mind TWO of them!

So, Marla Maples is listed as an Actor, but she is an “Actor” in the same way that Fox News is “news.” Really, she is one of Donald Trump’s many ex-wives, and that is her claim to fame. She is annoying in voice and personality pretty much right away. They do a Quickstep to “Diamonds Are a Girls Best Friend”, of course, because lets play off the fact that all she cares about is money. The dance was very good, I will say. She definitely got into that character very easily. Carrie Ann said it was “fun!” Len said it had “vim, vigor, and vitality!” Vim??? Who uses the word vim??? I think its time for Len’s other V-word – Viagra. Bruno made a terrible pun that he should be kicked off the show for with: “Forget about the Donald. Ballroom is your Trump card!” Boo!!!! Scores were 7/7/7.

First of all, Im hoping that I was somehow smoking crack or something when I wrote down this dude’s name, and that perhaps I wrote it entirely wrong. If not, then that means his name is actually Wanya Moms, and what on earth kind of name is that??? Anyway, he was in Boyz 2 Men, or still is (are they still a thing?), and they did the Cha-cha. It was energetic and fun, and they danced to one of his own songs. Len said “there was more packed into that than in Bruno’s makeup bag!” Ooooh, another joke from Len! Horny Carrie Ann stood up and danced weirdly and made noises like “Da-amm!!! Twinkletoes!!! Mmmmm!!!!!! Yeah!!!!” No idea what she was talking about, but she really needs to get laid soon. Scores were high at 8/7/8, and this dude can dance.

She is the Chief Meteorologist for “Good Morning America”, and also a new mom. She was not shy in rehearsals, telling Val: “Sorry if I leak on you. Im breastfeeding, and milk is gonna be everywhere.” Alrighty then. Thanks for sharing. During rehearsals, she brings her newborn baby, and Val seems to be slightly uncomfortable around infants, which is hilarious to watch. They dance a Jive, and it is really good. Bruno makes another lame pun: “The weather forecast is pretty good!” Carrie Ann says “you lit up the joint!” And Len observed: “It was frisky, risky, and fast and furious!” Unlike his bladder. Scores were high at 8/7/8.

She is an actress, from The “OC”, and they danced the Tango. I know little about her, but I do know this. She was walking across that dance floor. I saw zero dancing happening. Not that I should talk. Im the worst dancer on planet earth. Actually, no. Giraldo is probably worse. Anyway, she walked. Len finally let the grumpy man out completely: “You were just walking! That wasnt a dance! It was a WALK! Its not in my nature to be nasty though.” Riiiight. And it’s not in my nature to be sarcastic. Scores were low at 5/5/6.

He is a deaf model, and winner of “Americas Next Top Model.” Also, he is the hottest, most gorgeous, physically attractive, piece of man-candy I have ever seen. WOW!!!! On top of that, it was pretty damn impressive how GOOD his dancing was. Giraldo and Mischa couldn’t walk on the damn beat, and this guy CANT HEAR A DAMN THING and he was killing it out there. He was fantastic. Their dance was sexy, hot, and flowing. This guy is someone to watch. The judges were impressed. Bruno: “Shut up! Are you for real? I have to touch you in case you are a fantasy!” Then he walked up and scared the crap out of the poor man and literally touched him on his shoulder. I am willing to be that Bruno was hoping to touch him in other places too, but he would have gotten fired. And sued. Horny Carrie Ann practically wet hear seat with more comments of screeching and screaming nonsense sounds and words: “It was, like , HOT!!!! and then, yeah, and then, like, DAMN!!!!, and then, I was like, you are in the pocket, and then , like, Wow!!! Oh my!” What the fuck are you talking about, woman? Go take a cold shower. Scores were 8/7/8.

He is considered the Best Wide Receiver in the NFL, and plays for the Steelers. He likes to say “Booming!” a lot. He has catchphrases and seems like a cool dude. They did a Quickstep, and he can seriously move. It was great. Bruno said something about him keeping his frame “erect” – uh-huh Bruno. I’ll bet something else was erect too underneath that judge’s table. Horny Carrie Ann referred to him as a “Beast!”, and she was fantasizing about his beast-like frame all over her. She flipped out, stood up, screamed, and went totally insane with more nonsense words. Tom Bergeron begged: “Decaf – try it.” Len did not like it because he is old and grumpy and out of prune juice. Scores were 8/6/7. The 6 was from Len, who was just upset because he missed a new episode of “Wheel of Fortune.”

Another NFL player, this one the MVP for Superbowl 50, for the Denver Broncos. They did a Foxtrot, and it was really good. He is immensely tall, and Whitney is short, so it will be a challenge on the dance floor. Carrie Ann called them “soft and silky”, and Bruno said “hip hop and mighty hot.” Whatever that means. Len fell asleep in his Cream of Wheat. Scores were 8/6/7. Again, the 6 came from the old man.

Nobody got kicked off this week, since it was the premiere week, so next week we will have the first eliminations of the season. Also next week: Ginger Zee spills breastmilk all over the dance floor, and Giraldo slips in it during his Cha-Cha , ending up with his highest scores of the season. The show sends Keo home with a video of “Full House” to watch, so he can familirize himself with his partner more and her work. 7 minutes into episode one, he is heard sobbing and screaming: “What the fuck is this shit?” Len falls asleep at the judges table and drools all over Bergeron’s cue cards. 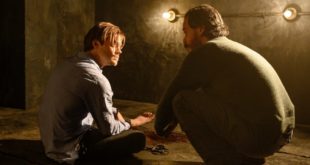 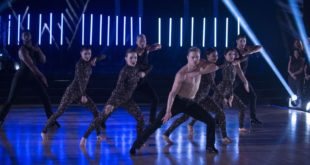 ‘Dancing With the Stars’ Review: Where the Hell Is Len? 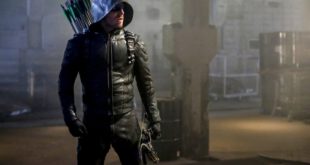