‘Outlander’ – “Wentworth Prison”: The Things We Do For Love

After last week’s somewhat dull affair, Outlander definitely did not hold back anything with “Wentworth Prison.” If you are the squeamish type or simply can’t handle scenes of torture, you might want to skip this episode. That being said, it is a good episode; it definitely accomplished what it set out to do, to remind us that Black Jack Randall is something worse than a monster. More importantly, it emphasized that sometimes, the hero doesn’t win.

From the beginning, we’re faced with the prospect of losing Jamie to the gallows. One by one convicts are led to the noose and nonchalantly thrown to their deaths. Jamie and Taran MacQuarrie watch in horror, discussing the finer points of dying, and what it means to die a man’s death, but Jamie doesn’t want to let the redcoats walk him calmly to his end, upset in the knowledge that he didn’t try hard enough to escape for Claire’s sake. MacQuarrie, on the other hand, is resigned to his fate and when his time comes, he goes willingly, and then takes an agonizingly long time to succumb to the noose. Jamie fights back, buying himself an extra moment of breath, and it’s a tense moment, wondering when or if Claire will show up to rescue him. Instead, it’s Black Jack Randall who appears and grants Jamie a reprieve, for at least one more day. 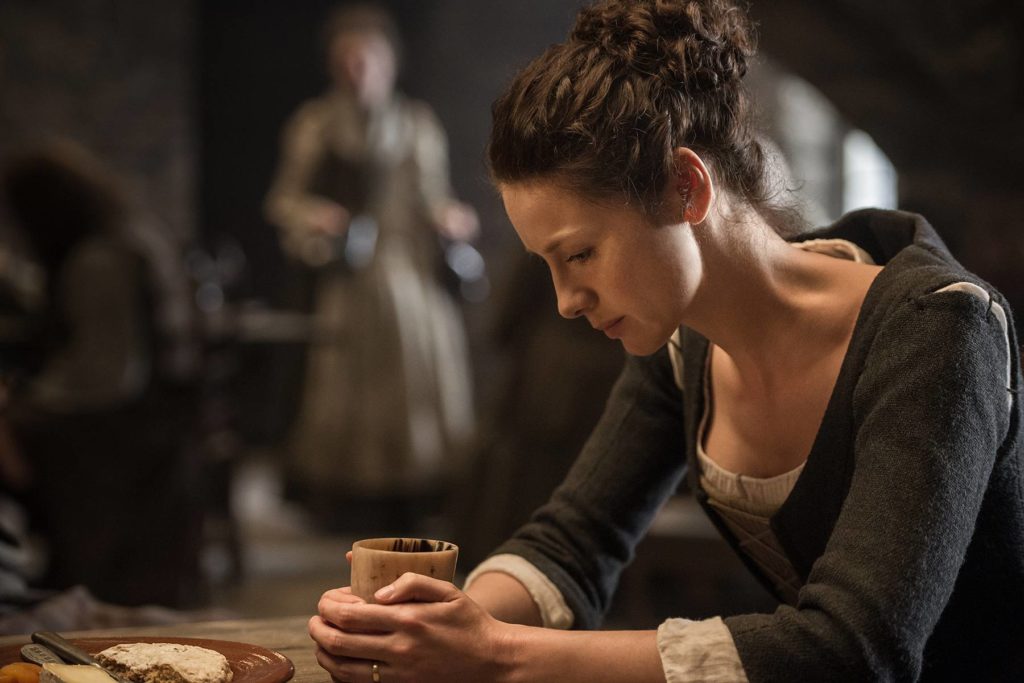 Meanwhile, Claire makes use of her proper English upbringing to learn of Jamie’s fate. She pretends to be a distant relative to the Frasers, simply collecting news of Jamie on his mother’s behalf. Sir Fletcher buys her act and expresses his melancholy at being unable to help such a kind, Christian woman. Sadly, at the end of the day, he is only able to give Claire Jamie’s belongings. It’s a fantastic scene, well done by Caitriona Balfe as she straddles the line between grief-stricken wife and half-hearted concerned kin. It’s the end of the scene that guts me the most. As Claire leaves Wentworth Prison, all the composure she managed in Sir Fletcher’s presence crumbles at her feet, leaving her sobbing, retching, and terrified.

In the dungeons, Black Jack shows his face to Jamie and the two share a typical hero/villain moment. Jamie refuses to surrender to Jack, so Jack tortures him emotionally as well as physically. I have to say, Tobias Menzies is horrifying as Randall; the way he clicks his tongue and stares without emotion are only small parts of the horrible creature masquerading as a human being. Frightening as those things may be, it is his words that truly inject dread. At one point he asks Jamie, “Tell me, when you lie upon your wife, and her hands trace the scars on your back, do you ever think of me?” and then he smiles, knowing he’s struck a nerve. But Black Jack’s words do ring true. Jamie may have escaped Fort William, but he will never escape Randall. Jamie strikes back, only to have Randall beat his hand to pieces with a hammer.

Claire and Murtaugh return to Wentworth, once again using her noblewoman guise to sneak into Sir Fletcher’s office to steal keys, documents, maps, anything that might help the pair save Jamie. Claire takes the keys and heads for the dungeons while Murtaugh gathers the other MacKenzie men to hide and wait in the forest. This part of the episode gave me pause. I know that Claire as a solitary Englishwoman could possibly talked her way out of being captured by guards, but I cannot help but feel that bringing along Murtaugh would have been the smarter choice. She opens a door to the outside, a door that appears rather close to Jamie’s quarters, a door through which the MacKenzie men could have entered to save Jamie. Instead, she goes it alone. 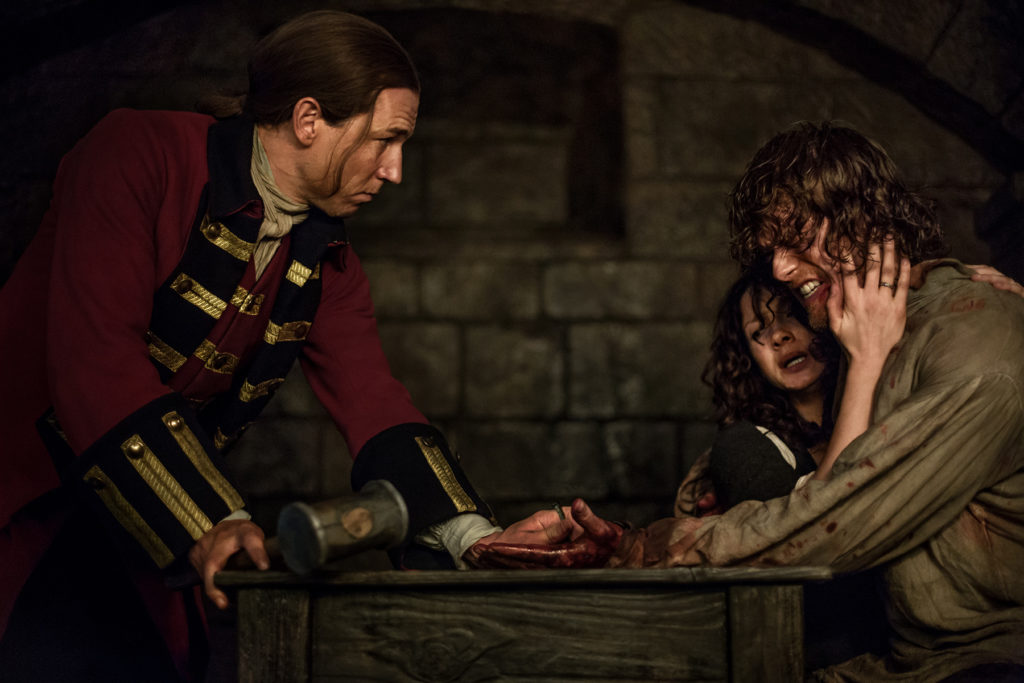 And this is when the horrific moments begin to occur. Up until this moment it was only simple torture, sadly, things we’re accustomed to seeing on television. Outlander made it all the more gruesome by adding in Jack Randall’s sexual perversions, and then forcing Claire to watch as her husband has a nail driven through his hand. Their combined cries and screams made me flinch and shy away from looking too closely at the screen, and I spent the final twenty minutes of the episode with my face in my hands, biting back a mixture of fear and sadness. To drive the point home that this is not easy to withstand, I usually watch the episodes I review twice, in order to make sure I haven’t missed anything of importance. “Wentworth Prison” was an episode I couldn’t bear to watch a second time the whole way through.

NOTE: That being said, it is an incredibly important (the most important) part of the episode that bears discussion. However, the weight of it is such that I cannot in good conscience dedicate only a few dozen words to a scene that made me cringe in horror so much (and I’m kind of heartless when it comes to these things). The power and emotion behind the brutality deserve a post of its own.; therefore, keep an eye out for that discussion soon.

By the end of the episode, Claire, after having watched her husband abused and then agree to rape, is thrown from Wentworth (a fall that I was almost certain broke both ankles), without Jamie. She makes her way back to the Mackenzies, a broken shell of her former self, but still she is resigned to saving the man she loves. The unlocked door comes back into play as the group plans to use it to attack the prison, despite so few numbers. In two weeks (haven’t we waited long enough, Starz?) the final episode “To Ransom A Man’s Soul” airs and we’ll finally learn Jamie and Claire’s fate.

Outlander airs on Saturdays at 9PM ET/PT on Starz.
Photos courtesy of Starz.