‘Outlander’ – “Surrender”: Jamie Gives Up Everything to Stay Jamie

This week on #Outlander: Jamie tries out the Forrest Gump look, Jenny has a baby, and Claire is all kinds of frustrated.

I thought last season was bad, waiting through the entire first episode of Outlander for Claire and Jamie to be reunited. After episode two, “Surrender”, Outlander seems intent on filling in the gaps between the Battle of Culloden and the moment when Claire decides to go back through the stones. From a storytelling standpoint, it’s important to establish Claire and Jamie as individuals, living their lives without the other. From the viewpoint of a romantic trash bag like myself, it’s awful. They’re miserable and it’s breaking my heart. Get them back together already!

Much of the episode follows Jamie and his time in hiding outside Lallybroch. After being saved by Lord Melton following the Battle of Culloden, he sends a dying Jamie back to his family in Lallybroch. Some time has passed since his arrival to his familial home and it’s been a few years since the end of the Jacobite rebellion, judging by Jamie’s Forrest Gump locks and beard, but that time apart hasn’t stopped the Redcoats from looking for Red Jamie.

Poor Ian Murray spends a significant amount of time in and out of jail cells, all for the sake of protecting his brother in law. You have to admire Ian’s love for Jamie and Jenny and even though he’s crippled, the Redcoats show him little mercy. A new Redcoat, Corporal MacGregor proves himself to be almost reckless with his hatred toward the Scots, even though he’s a Scot himself. He threatens Jenny and the children several times throughout “Surrender” and it’s a miracle that Jamie didn’t eventually lash out at him. Maybe it’s because Jamie is a shell of his former self, especially now fully realizing that he has to live a life without Claire. He doesn’t want to fight. He doesn’t want to stir the pot. He’s content being a bachelor who lives in a cave in the woods, providing however he can for the family he has left. Because of his instinct to hide and keep quiet, Fergus tells Jamie:

“Just because you are a coward now doesn’t mean I am.”

It doesn’t phase Jamie. Not yet. It’s not meant to at that moment. But as the episode progresses, Fergus’ building anger towards his adoptive father comes to a head.

Jenny has her second child, another boy she names Ian, and as she’s in labor, a raven appears over the house. Rabbie informs Fergus that a raven is bad luck and it’ll kill the baby if they don’t do something, so Fergus loads a pistol and shoots the raven dead. The Redcoats hear the gun fire and rush toward Lallybroch while Jamie is inside holding his nephew. He and the baby hide while Jenny, always sharp-witted, and Mary McNabb explain that the children shot a raven to protect the baby, but it was too late as the child was stillborn. The Redcoats are satisfied with the story and leave but Jamie realizes more and more that his presence puts his family at risk.

It’s not until Fergus has his own run in with the Redcoats that Jamie realizes he can’t live his life in hiding. In an effort to lead the Redcoats away from Jamie’s cave, Fergus angers Corporal MacGregor. Despite protestations from the other Redcoats, MacGregor seizes Fergus and cuts off his left hand in a fit of rage. Unable to intervene without endangering everyone at Lallybroch, Jamie watches the scene helplessly from afar, feeling ever guilty that his son now suffers for his sins. 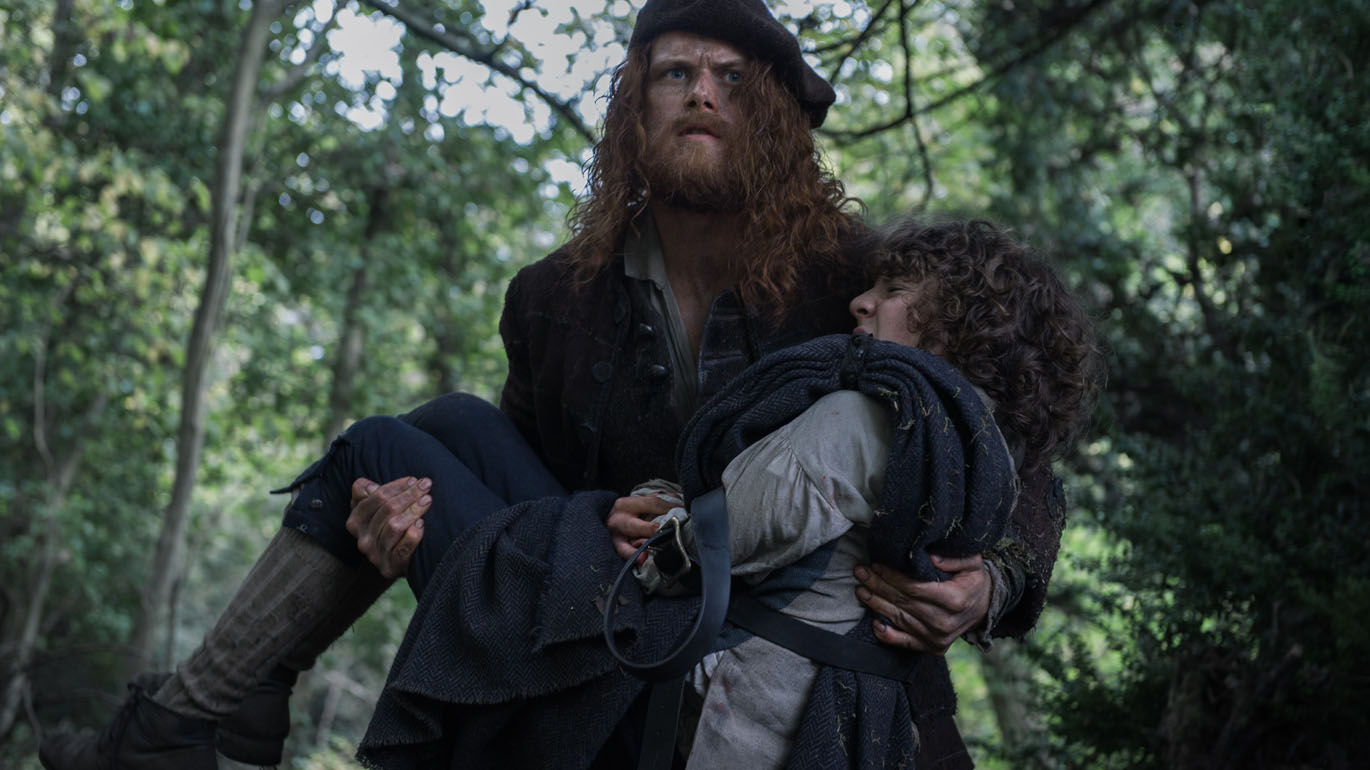 At Fergus’ bedside, Jamie apologizes for not being better but he tells Fergus:

“You remind me I have something to fight for.”

Even though Fergus is a reminder of Claire, he knows that he needs to do her proud by being the Jamie we’ve come to love. Jamie knows that Fergus will suffer for the rest of his life, he’ll be handicapped without the use of his hand, but he also knows that Fergus is strong and he’ll protect Lallybroch for him.

It’s then that Jamie decides he’ll turn himself into the Redcoats and Jenny will be the one to do it so that the family can get the reward for his capture. In the most Jamie-esque of the episode, he surrenders himself up to be a prisoner so his family can be safe.

Fake It ‘Til You Make It

In the 20th century, Claire goes about her daily life as a mother and a housewife. Keeping busy is something Claire has always been good at, but she knows that without Jamie, her life will always feel empty. At night she sees him with her and it’s clear that she’s frustrated not just personally, but sexually as well. Claire turns to Frank to soothe that ache, but she does a horrible job of hiding the fact that she’s thinking of Jamie when she’s intimate with Frank. 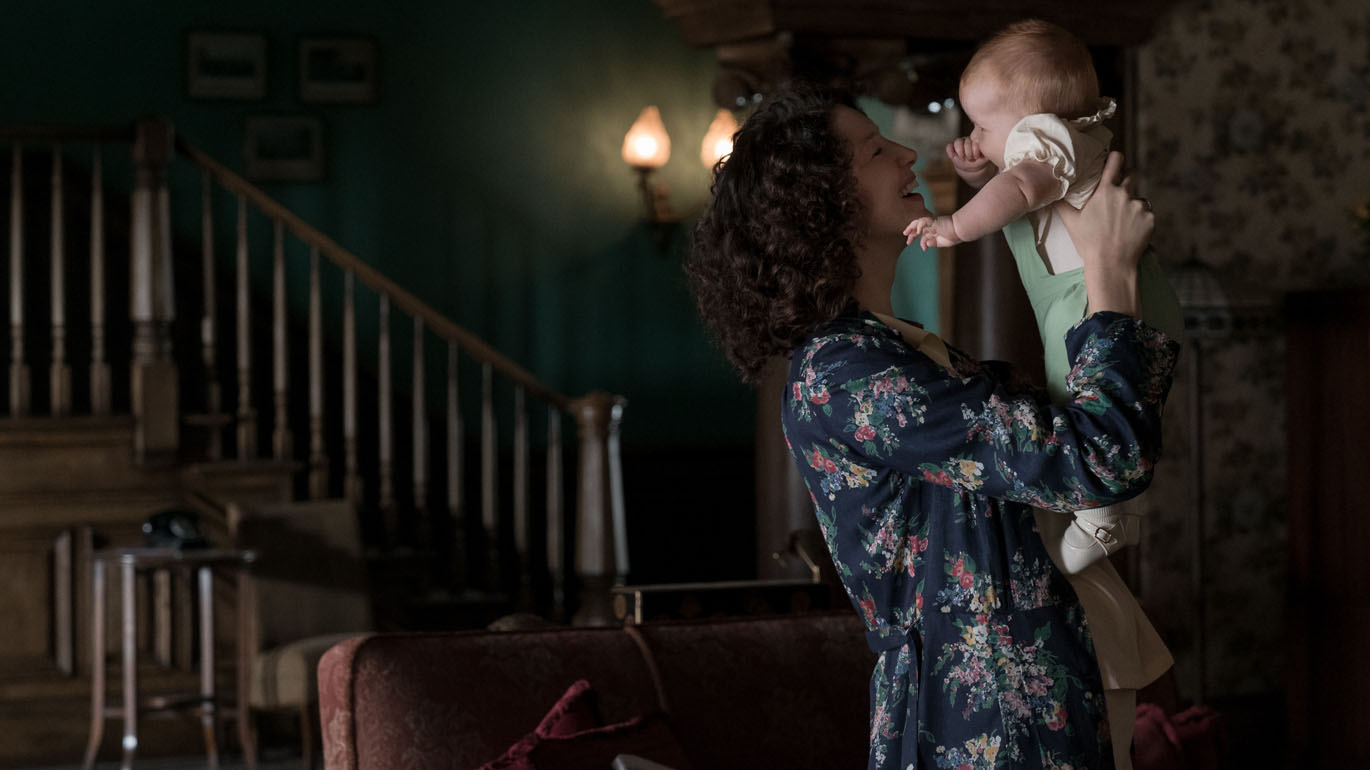 At a dinner party with another couple, it becomes painfully obvious to Frank that Claire has all but lost that loving feeling for him. She does her duties and puts on a believable show, but when faced with a couple who laughs and jokes together, the canyon between them grows wider. Claire tries to stymie that distance in usual Claire fashion, with sex, but Frank can’t handle any more of her faking. He calls her out on her behavior, claiming that when he’s with her, he’s fully with her, but she’s somewhere else, with Jamie.

After that, the relationship becomes more constrained, more like a business partnership. They take up separate beds and do as they must, but the rift between them will never be healed.

Claire decides that she needs to find a healthy distraction from Jamie. She goes to school to become a surgeon, befriending the only other minority in her year, Joe Abernathy. Just as it seems like Claire has a hold on her life, as she’s moved away from the memories of Jamie, she comes across a man playing the bagpipe on the street, and it’s a lasting reminder that wherever she goes, the memory of Jamie goes with her.

I adore Jamie and Jenny’s relationship. She doesn’t hold her tongue but she loves her little brother with all her heart. She knows that Claire meant the world to him and that it breaks his heart holding a child in his arms, knowing he’s lost two of his own. Jenny tries to get Jamie to be more open to another love, but he won’t have it. In the end, his stubbornness in protecting her wins out and he gives up himself to keep the Murrays safe. Jenny says she’ll never forgive him for it and as he turns back to look at his sister, there’s a sadness in his eyes that says he believes her.

I feel for Frank. He’s a good father to Brianna and he loves the little girl even though he knows she’s not his. He’s tried putting aside every distance between him and Claire, but she keeps finding ways to remind him that he’s her second choice, so of course he snaps. He’s not a bad man. He’s a broken man.

Previous article
The Most Adorable Tidbits From the ‘Dark Matter’ Reddit AMA
Next article
‘Teen Wolf’ Review – “Genotype”: When 2 Become 1