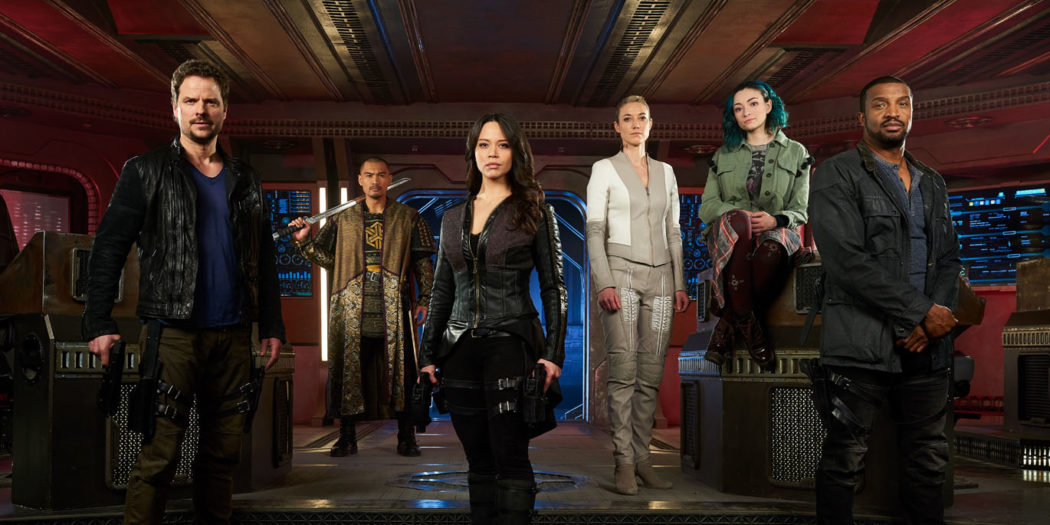 The Most Adorable Tidbits From the ‘Dark Matter’ Reddit AMA

First order of business: Dark Matter needs to be picked up by someone. Syfy, Netflix, Hulu, anyone who will keep Joseph Mallozzi’s vision in tact while also keeping this kickass sci-fi show alive. After three seasons, I’ve fallen in love with the characters of Dark Matter and I’m not ready to say goodbye just yet.

It seems the showrunner, the cast, and the crew aren’t ready to say goodbye to Dark Matter either, as they’ve cultivated social media protests in an attempt to catch the eye of any network, to prove that Dark Matter fans are dedicated and they need this show to continue. The actors behind-the-scenes are some of the most avid supporters of the series and their love and passion extends even into a Reddit AMA:

imin_cognito:
Joe, you mentioned that you have a five year plan for Dark Matter. The Android was originally male but you ended up casting Zoie. Was the Android/Shaw – Two/Rebecca connection part of your original vision or was that one of the plot points that occurred to you as the seasons progressed?

Zoie Palmer: Yeah Joe, was it, was it?

Joseph Mallozzi: That was a connection I came up with early on that was adjusted significantly with the casting of Zoie Palmer in the role. I’m sure you’ll agree, this new improved version worked out pretty well.

cmplxgal:
For the group: Would you consider doing a musical episode, or would that be too different a feel for the show? The musical episode on Buffy the Vampire Slayer is iconic.

Alex Mallari Jr.:  Can we be the rap duo of the group, Zoie? Puh-leeeease?

Jodelle Ferland: Also a huge fan of that Buffy episode!!!! I think it would be hilarious. But then I think about me having to actually sing and it gets less hilarious

Anthony Lemke: Um… yes. But the real question is would anyone watch!

Let me just go ahead and stop you right there, Anthony. Yes, everyone would watch, especially knowing that most of the cast has musical backgrounds.

korvorn:
For Jodelle: As a Who fan, even though you got to time travel this past season, were you just a weeee bit jealous that the android got the “Allons-y” line in s3e4″All the Time in the World”?

Jodelle Ferland: YES I WAS. I even have an Allons-y tattoo!!!

JDP42:
Zoie Palmer, when you’re playing the Android, do you find it more realistic to channel a block of wood or a chunk of stone?

Zoie Palmer: bahahhahahahahahahaha best question yet. And to answer you, I like to go back and forth between wood and stone, throwing in the occasional consciousness of an amoeba.

Starbuck125:
One prop you hated to work with?

Jodelle Ferland: BUBBA IS SO DAMN HEAVY AND I AM SMOL. There are two versions, but the lighter one can only be used for wider shots.

Jodelle Ferland: Oh god the comms. I second this. They fall out every few minutes it seems.

(Probably because Two was stunned at least a dozen times this season alone.)

mint6errycrunch:
Melissa – In the episode Isn’t that a Paradox, how was it working with Tehya (Melissa’s dog) and what acting tips did you give her?

Melissa O’Neil: Tehya was insufferable on set. She demanded attention, distilled water in glass bottles, and the finest treats that contained no more than 5 ingredients. My dog is amazing. I wish I hadn’t been shooting in the previous scene so I could run her out. She does that crazy frenchie smiling face thing when she’s tired and I wish we could’ve gotten her to that point for her big close up. Next time! 😉

Criswel:
Zoie, what is your favorite Android Moment?

Zoie Palmer: So many to pick from, I love any moment where the Android is trying. I love it when she’s trying to figure out people or a moment, or how best to word something she thinks might be hard to hear for one of her crew members. But oddly I really like it when she’s also in complete automatic pilot and it full android. just doing something she is programmed to do, there is a lot of fun in those moments. Like if she just throws her arm out sideways and strangles someone. There’s something oddly satisfying about those moments too.

falling_into_fate:
Do you all get along off set? You seem to have very good chemistry it would seem like you’re all great friends behind scenes.

Melissa O’Neil: I think I might love them too much. Like, I’m that annoying friend who has nothing going on and just wants to hang out with everyone even after the lights have gone down and they are back with their families.

Alex Mallari Jr.: If y’all only knewwwwww how tight we actually have become!

Jodelle Ferland: Ugh, no. Jokes, we love each other!!! Which makes our job a lot easier.

congotim:
If you could each play a different character from the show, who would you be and why?

Anthony Lemke: Five. Cause she’s both really different than Three and kind of the same.

Jodelle Ferland: Then I choose Three, let’s just make it a body-switching thing!

Zoie Palmer: I jump up and down naked in front of the cast. I was weird for them in season one, but now they all pull up a chair and eat their breakfast while I do it. No biggie.