This week on Teen Wolf, “Genotype” has the pack doing everything they can to keep the Anuk-Ite from merging its two halves. Teen Wolf is gearing up for the series finale and aired two episodes on Sunday, so be on the lookout for the “Broken Glass” review coming later this week.

Mason, Liam, Scott, and Theo listen to a voicemail from the phone they stole last week from one of the dead bodies in the woods. The teens decide to split up, sending Mason and Theo after Aaron, and Scott and Liam after the mysterious werewolf on the phone. 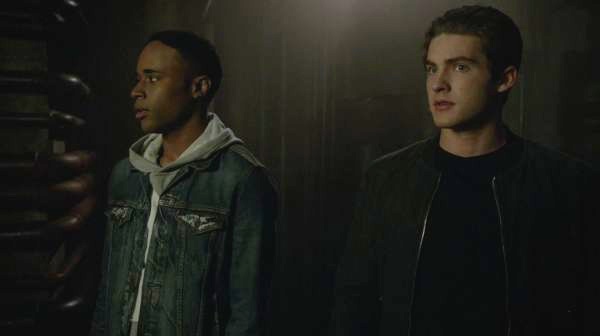 This is a dynamic I never knew I needed!

Theo and Mason head down into the series of never-ending tunnels under Beacon Hills to search for Aaron. Mason explains that he wants to search the tunnels because they’ve all been too afraid to go back into them, and we know the Anuk-Ite creates fear. Mason freaks out when Theo says he wants to be part of Scott’s pack. He says that the pack is about trust and that even if everyone else forgets what Theo has done, he won’t. They’re both shaking when Theo suddenly wolfs out. Instead of attacking Mason, Theo shoves him out of the way of Aaron’s attack. When Theo tries to take Mason’s pain away, Mason says “you can’t take pain if you don’t care.” Ouch. 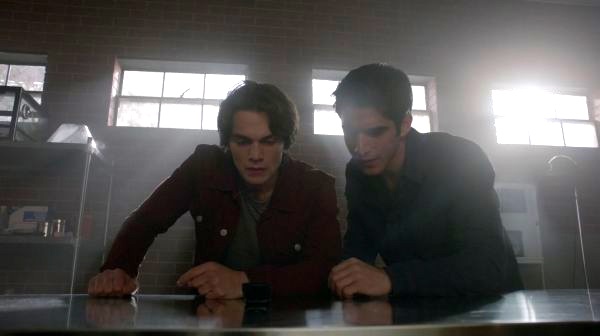 Liam and Scott are getting nowhere with tracking down the mysterious voice from the message. They decide to just call the number back, and Beacon Hill High School answers. Liam listens to the voicemail again and realizes that it’s his Biology teacher Mrs. Finch.

Scott makes Liam go to Biology class where Liam tries multiple things to out Mrs. Finch as a werewolf. None of them are successful, and when he sprinkles Wolfsbane on the chalkboard, Mrs. Finch realizes what he’s up to. What follows is a hilarious exchange where Liam accuses Mrs. Finch of being a werewolf, and she accuses him of being on drugs. Liam is explaining that a werewolf is “a person that turns into a wolf on the full moon,” when Scott bursts into the classroom and plays the voicemail for her.

This funny moment turns sad immediately as we realize that the phone belonged to Mrs. Finch’s daughter, and Scott has to tell her that her entire family is dead. Mrs. Finch won’t accept that her daughter is dead, and has been replaced by the Anuk-Ite. Scott and Liam ask her to text her daughter to lure the Anuk-Ite to the school, but she can’t do it. Showing off his budding alpha skills, Liam offers to do it for her. When he asks for her daughter’s name, Mrs. Finch reveals that it’s Quinn, the werewolf who was attacked by a sheriff’s deputy in the beginning of the season. To be honest, I never would have remembered this but Teen Wolf showed her in the “previously on Teen Wolf” section at the beginning of the episode.

When Quinn shows up, Mrs. Finch blows Wolfsbane at Scott and Liam to paralyze them, hoping to save her daughter. She was wrong though, it’s not Quinn. It’s the Anuk-Ite, and it attacks Mrs. Finch, slicing her throat. As Scott rushes to Mrs. Finch’s side, Quinn is suddenly overcome with wounds because apparently when Aaron is being hurt by Theo, she gets hurt as well. She takes off, and Liam follows. 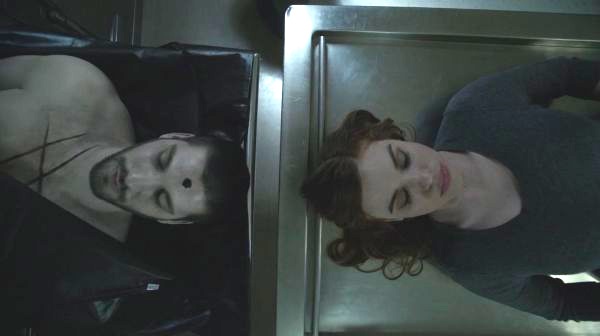 Lydia and Malia spend most of the episode in the hospital messing around with the maybe not-so-dead hellhound. I wasn’t sure about Malia when she was first introduced to Teen Wolf, but I am such a fan now. Watching her forcing Lydia to touch the hellhound in various places was hilarious. As was the smile on her face when she offers to knock Lydia unconscious! Lydia says she’d prefer to be rendered unconscious without pain, and instructs Malia to obstruct her airflow, which almost immediately works.

Lydia’s unconscious mind connects with the hellhound in some freaky Eichen House nightmare, and when she wakes up she says that he’s definitely not dead and that she knows how to save him. Malia and Lydia sneak them into an MRI and we find out that Lydia’s plan is to use the MRI machine to magnetically pull the bullet out of the hellhound’s skull. Gross. Before they can start, they realize the bullet is coated in silver which won’t react to the magnet. Lydia explains for those of us at home without science backgrounds that even if they pull the bullet out, the hellhound will die of silver poisoning. After a lengthy discussion, they decide to do it, saying that the hellhound would likely do anything in order to stop the Anuk-Ite.

When the hellhound comes to, it’s already obvious he’s dying. He tells them that they can’t kill the Anuk-Ite, they can only trap it. He tells them that it’s essential to keep the two halves from merging, but if they do, make sure not to look at it because the Anuk-Ite can kill with just a look. He dies, and I can’t help but feel that this is a trauma Lydia and Malia might not get over.

The Anuk-Ite rises! I don’t even care because SHOWER SEX.

Liam follows Quinn to the library where Aaron has come to find her. Aaron and Quinn start making out and lots of horrible spiders travel back and forth between their mouths. I’m assuming this is what it means to merge the two halves. The two quickly go from making out to fighting, and Aaron snaps Quinn’s neck. He’s surrounded by a purple fog and transforms into the Anuk-Ite’s true form. Just as Liam is about to look right at him, Lydia bursts into the library and pulls him away. As Team Wolf wonders how they can fight something they can’t look at, they realize they need Deucalion.

Back at the McCall household, Malia is cleaning Mrs. Finch’s blood off of Scott. She tells him to just get in the shower, and then they’re both stripping for each other. I love Malia, I love Scott, I love the two of them. They have some steamy shower sex and I am left wondering if Melissa is still in the hospital.

Speaking of the hospital, the Anuk-Ite shows up and is killing everyone. It goes to the morgue to see the hellhound, but the hellhound is dead. All of a sudden, Gerard steps out of the shadows, careful not to make eye contact. He offers the Anuk-Ite help getting its freedom and says that he’ll weaken Scott McCall. Gerard says “every legend has a bit of truth to it. The legend is you need silver to kill a werewolf. The truth is, you need an Argent.” MY HEART.