On LARPing and Conventions: GSCF 2022

After seeing it featured in Hawkeye on Disney+, we decided to check out some LARP gear at the Winter Edition of the Garden State Comic Fest 2022

As we soon enter the third year of the pandemic, always with the promise that things are winding down, it’s easy to lose yourself in the wonders of binge-watching. Stream, stream, the bad times away, right? Well, nice as that might seem, it’s probably not the best option for your health. As you may or may not know a sedentary lifestyle isn’t great. Sitting is basically the new smoking. Don’t get me wrong, the vicarious thrill of watching someone on a Netflix or Disney+ series jog about and globetrot is fantastic. But it’s still not you jogging or trotting. Still, one series, a little Disney+ Christmas special called Hawkeye, did offer an oft-overlooked solution…

LARP, or Live Action Role-Playing for those of us unfamiliar, turned out to play a pivotal role in Disney+’s Hawkeye. Early in the series, Clint Barton (Jeremy Renner) loses his wayward Ronin suit to a NYC firefighter (played by Clayton English) who steals it from the burning apartment of Kate Bishop (Hailee Steinfeld); later, forcing the reluctant Barton to partake in the activity to try and win it back. It should be noted that members of the LARP community do not condone this behavior. Stealing is bad kids even if you’re Elf royalty in your off-time.

Anyway, LARP used to be thought of as a nerdy straight white male pastime. The inevitable evolution for Dungeons and Dragons players who grew more mature, got some money, and moved out of their parents’ basements. In recent years, however, there’s been a real push to legitimize this pinnacle of nerd culture.

LARP at The Merchant of Many Things: GSCF 2022 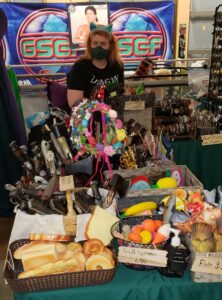 While at the Garden State Comic Fest last weekend, I met and spoke with a man named Eric Roll. Eric is a “booth babe”, working for a company called The Merchant of Many Things—a supplier of weapons, clothing, and accessories to make your LARP game strong.

Having watched Hawkeye I was drawn to the playful vendor setup featuring meta signs like “Bread 5$”, “Potion bottles”, and “Fish”. Mind you, each of these items, save for the bottles, is an adorable recreation of their real-world counterparts.

The weapons, by contrast, are no joke. While not made of genuine steel, they have come a long way from the pool noodles and cardboard swords of Role Models (please note: Eric does NOT recommend a pool noodle wrapped around PVC pipe—don’t do it!). These weapons are beautiful, and some of them even have a decent heft to them, not to mention they are crafted with safety in mind. 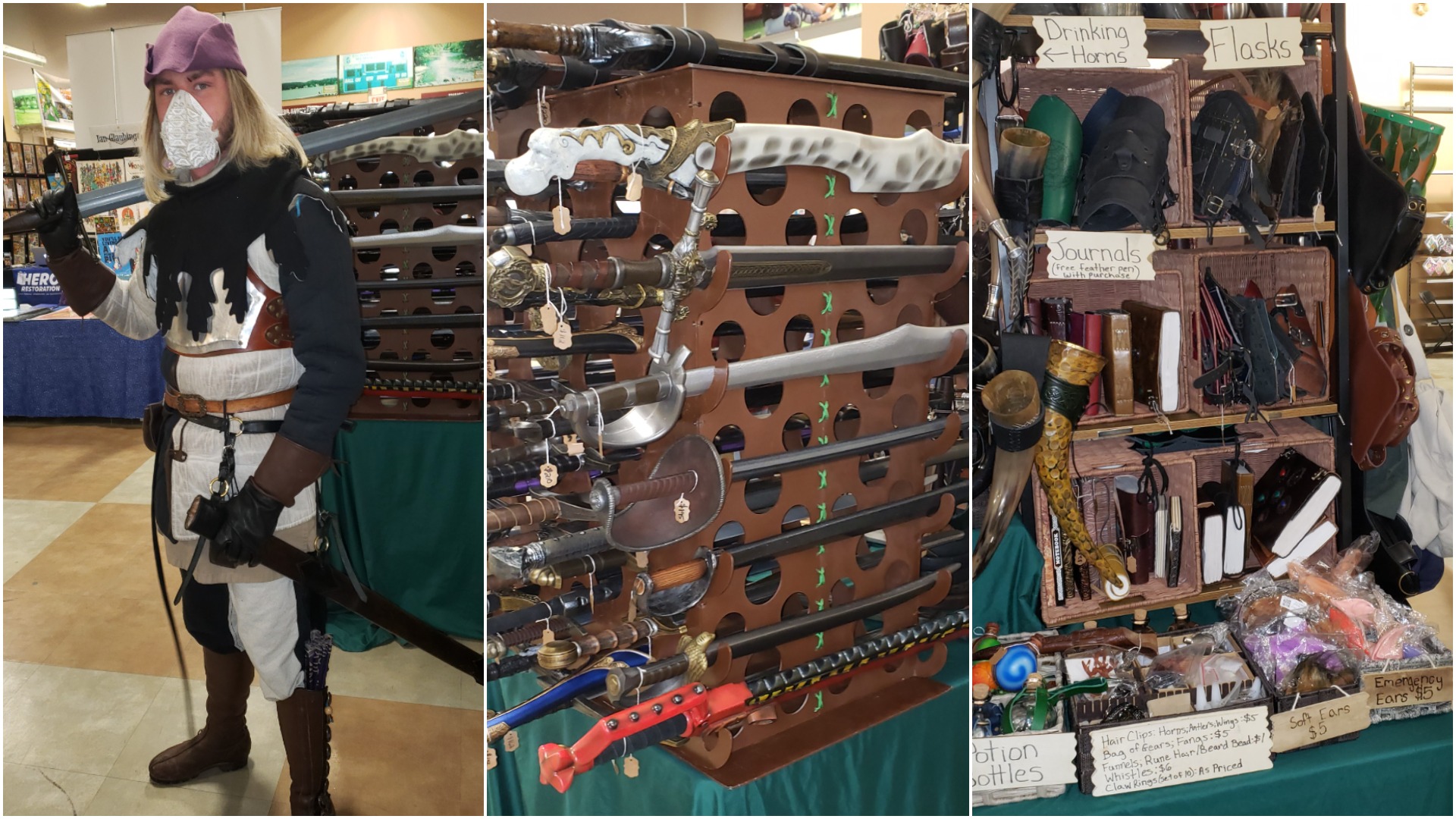 Well, you’ve got a place to procure provisions, but where can you play? Turns out, that’s probably just an internet search away.

Eric says for Jersey boys and girls itching to sate their fantasy curiosities Knight Realms is a game based in Spartan which runs monthly events out of a repurposed Girl Scout camp. If you drop by at the end of the month, you could run into The Merchant of Many Things as Eric informed they will be vending there!

Don’t live in Jersey? That’s ok, you’re not without hope. Amtgard and Dagorhir are two groups Eric mentioned to me which have chapters in just about every US State. In fact, the only real boundary to dipping your toes in the fantasy role-playing moat is you…also, being from an urban area doesn’t help. See, most LARP is done in wide open, rural spaces. This might explain the lack of diversity in many LARP communities, but just because it’s been this way so far doesn’t mean it has to stay this way. Check out LINC—LARPing in Color—a nonprofit dedicated to helping the LARP and tabletop community become more diverse and inclusive.

Eric sounded very hopeful for the future of LARP—where safety, anti-harassment, and inclusion are concerned. He told me a lot of games are becoming more inclusive, with some having a strong POC and LGBTQ+ base. If you’re in these groups, don’t despair you can find a community that will accept and embrace you!

OK, so, you’ve got a club in mind, a place to go, but how do you…actually get started? What do you need? Is the overhead high?

According to Eric: no. In fact, by his account, all you need is a dagger, a shirt, pants, a belt, and a character in mind. While The Merchant sells fantastic weaponry, do check out whatever weapon requirements your LARP has—Eric told me a lot of the NY area LARPs stick to what are called “boffers”—which would be your standard foam sword. Once again, don’t make your own out of PVC and foam, better to use fiberglass and EVA foam.

The bright side? Boffers are very affordable, making this pastime pretty easy to enter. Eric’s recommendation for buying a weapon (should you find a LARP that allows for more elegant weaponry)? A dollar a day rule—so, if a weapon is less than 365$ and he’s using it every day, well, that’s less than a dollar a day! His sword was 200$ but he’s been using it for five years! Not too shabby.

But what if you don’t live around any LARPs?

Eric recommends signing up for an event and planning a vacation around it. This allows you to build up a solid character in the downtime, making for a grand premiere! Plus, the community is still online, so you can maintain relationships and character stats in the world wide web. Basically, similar to how a lot of high-end cosplayers do it—build yourself up for that one time of the year when you show it off, then use the downtime to improve for the next round.

I will say after watching the Olympics for the past week I’m motivated to do something. And, considering LARP is a much more reasonably priced hobby than say, skiing, I might take the plunge. Will you?