Not only does this episode silence the naysayers and every negative critique out there, but it also, proves that they knew what they were doing all along. As we detail in our Star Wars Obi wan Kenobi episode 5 review.

I have never felt this excited about the end of a Star Wars anything since exiting the theatres after seeing Rogue One, which even now, is still my favorite Star Wars movie. I can’t believe Deborah Chow and crew pulled this episode off and I genuinely think all Star Wars fans will leave this episode rather satisfied. As it brilliantly ties everything together.

I stress this because, last week, I was really on the fence about the series overall. I’d loved the first two episodes of Obi-Wan but somewhat hated the last two. The Obi-Wan versus Anakin battle really made little continuity sense for me (it still does and the last two weeks confirm even more how none of that duel makes any sense) and seeing Kenobi get his groove back in a day (which confirms even more why that duel made no sense), made me stress over which trilogy we were closer to emulating: the Prequels or Originals? As I went over in my previous reviews.

So what’s changed regarding my take then on the series? Well, a couple of major fixes occur in this episode. Things that diehard fans like myself–people who know way too much about Star Wars Legacy canon–called out on regarding force power continuity, character development, and a major plot hole that I think gets addressed rather perfectly here.

Pretty much all the negative things fans had complained about (minus the Reva racism bit, which was always stupid and blatant hatred) get fixed, showing that all the complaining I’ve done the last two weeks… was always a setup for a red herring. Effectively drawing the fan’s ire and attention, then pulling it back, in a brilliant showcase of surprisingly well-written Star Wars that will appease fans both old and new.

Now, let’s get into spoilers about why.

Can you say Rebel Alliance? Because it certainly feels like we’re going that way, and my God, does everyone in this crew kick some serious butt. Everything about the bunkering down survivors versus the evil empire feels reminiscent of the attack on Hoth or the final moments of Rogue One.

There is a ticking clock until the empire closes in, a series of heroes trying to fix the situation/finish their overall story arcs, and yet another cunning escape, as bad guys tend to really fall for decoys (decoy ships, decoy escape pods, decoy princess Padmes) in Star Wars lore.

You’ve got Leia (Vivien Lyra Blair) helping scale an essential vent to hit a switch, a funny Haja (Kumail Nanjiani) still finding schemes for profit despite having lost everything, Roken (O’Shea Jackson Jr.) providing the voice of a leader/reason, and sadly, a very beautiful scene featuring Tala (Indira Varma), whom along with 1-JAC, make the ultimate sacrifice for the cause in a badass blaze of glory.

All of this is a reminder of those who fought tooth and nail in order to survive. That the empire is evil and murders its enemies indiscriminately, both ex-Jedis or Force-sensitives, but also, any person or voice that impedes their way.

The most nostalgic moment of this episode was in seeing General Obi-Wan Kenobi reminding us why he was one of the best leaders during the Clone Wars. I’ve stressed so many times in these reviews about how I’m uncertain which Obi-Wan is being portrayed and why that’s a bad thing. Yet, in this episode, you get the best of both, which is what I think fans always genuinely wanted.

Obi-Wan has solid battle tactics reminding us why he was such a famous General. He’s courageous and willing to put himself in the line of fire, taking the vanguard of the battle, especially now that he’s got his Jedi prowess/groove back. More than anything, Obi-Wan shows heart and gives a few rousing speeches. Reminders of how this man was always such a beacon of goodness and hope.

I can’t stress this enough, Ewan McGregor has finally gotten this role down, with stellar performances showcasing the energy of the prequel Obi-Wan, while also, portraying a wiser and older man, who understands the pains of loss. He is someone who is outwitting his enemies, knowing that, no matter his efforts, this enemy, the Empire, is always greater. And how sometimes, preserving life means more than gaining victory. Why that is the Jedi way.

That said, because of how strong this Obi-Wan arc felt in this episode, I finally fell in love with the portrayal of Darth Vader in Part V. Jedis and Sith are meant to be very meditative and thoughtful as they’re always attuned to The Force. But Terminator Vader has felt very one-dimensional in his role so far, being mostly, an angry killing machine of shallow words and mostly murderous actions. Which was my biggest critique of his portrayal so far.

This episode answers that call and finally sees Darth Vader (thanks to fantastic flashbacks where we actually see Hayden Christensen) reflect on his lessons with Obi-Wan.

Anakin reminds us that he’s more than just a murder machine. He’s also a cunning leader. A well-known religious zealot. A Dark Lord of the Sith. Vader is someone who is calculating in his betrayals–which was beautifully showcased in this episode in his final betrayal against Reva.

How Darth Vader was always using Reva, and most importantly, that the Grand Inquisitor was very much alive, is a major deal and one of my favorite things about this episode. It tells me that Star Wars respects Dave Filloni and Star Wars: Rebels–which they should, given that he’s Star Wars’ equivalent to Kevin Feige–but that more importantly, that Darth Vader actually has plans. Just like his mentor Sidious, he is a character more than willing to use and betray people.

It is something that audiences needed to be reminded about, as it ties into the entirety of this arc that’s been in front of us the entire time. One that a lot of audiences have complained about: Reva, and her entire backstory.

To be blunt about it, I’ve both read about and got DM’s regarding hateful messages about Reva. That Star Wars, just like Disney, is ‘Woke’ Culture. And how that making Reva Grand Inquisitor, was just a horrible idea giving power to a black woman in lieu of Star Wars canon for the sake of Woke-fans. All of which, I completely disagreed with.

Reva was my second favorite thing about the series. But seeing as how her storyline ties into the opening scenes with the Padawans in the Jedi Temple during Order 66? More importantly, seeing how it wasn’t just a ploy for Reva to gain power, but in actuality, a grand power play to eventually commit vengeance against she loathed for ruining your life: Darth Vader…

I LOVE THAT STORY 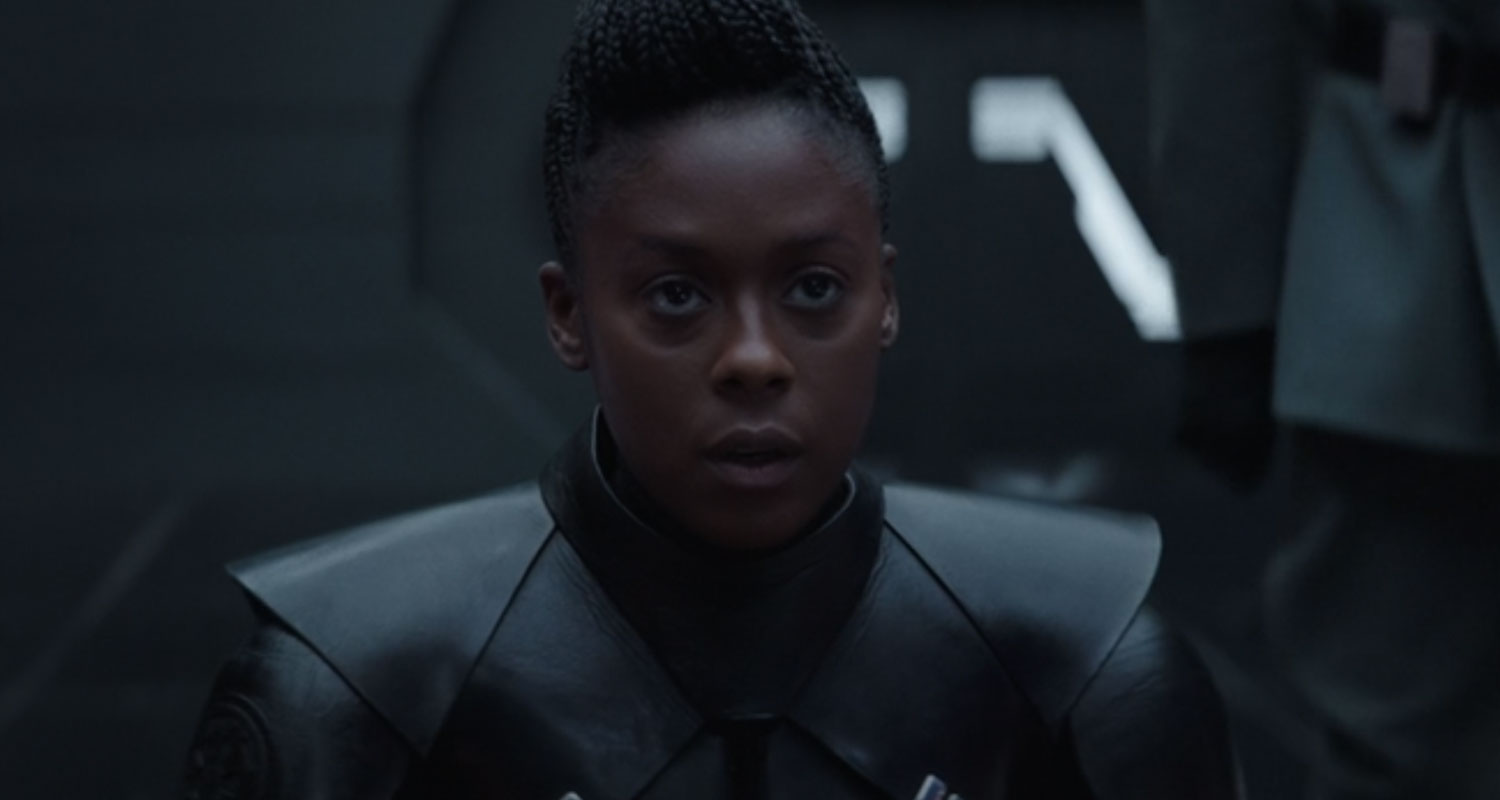 Reva’s story is really Kill Bill in nature. It’s kind of awesome and makes Moses Ingram, whom I thought was already fantastic since the beginning, my favorite character of this series.

Seeing the betrayal play out as it had reminded me entirely of Vader trying to tempt Luke in Empire Strikes Back. But seeing Obi-Wan do it with Reva, had me jumping for joy, as I was honestly a little worried we were going into the Force Ghost and Star Wars: The Force Awakens direction with Jedi projections. Instead, having Reva get her revenge made for a much cooler story beat.

Now having said all of that, the Reva motivations, the Darth Vader original trilogy-style cunning, them bringing back the Grand Inquisitor to not mess with the continuity, and Obi-Wan finally finding his footing as the best of both Obi-Wans…

I genuinely think the series completely fixed every single one of its negative criticisms. It also makes for a compelling tale from beginning to end.

The Take on Obi-Wan Kenobi Episode 5

It’s hard to say this about anything Star Wars: Obi-Wan Kenobi Episode 5 is the best episode of the series. I am finally excited to say that I’m both a fan of it and am really looking forward to Season 2. Everything about Obi-Wan is great to me, and I, for the first time ever, really want to see more Hayden Christensen.

Perfect in every way. And I don’t say that often.