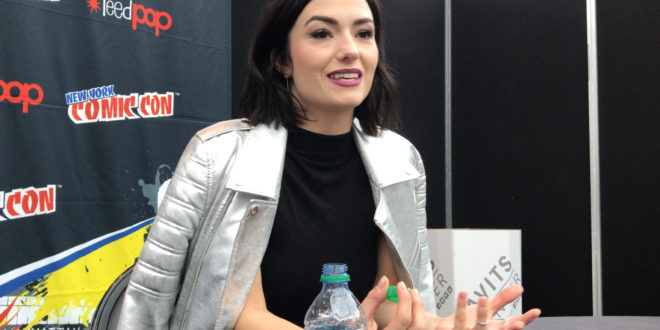 The Workprint sat down with the wonderful Natasha Negovanlis to discuss The Carmilla Movie, the Creampuff fandom, and the importance of portraying positive queer characters. You can watch the video of the interview below:

You guys have built up a really big LGBT fanbase, do you feel that there’s a lot of pressure for you particularly, now that Carmilla is done, to be representative in the roles that you choose going forward?

Natasha Negovanlis: I enjoy the opportunities that I have to provide positive on-screen representation for the queer community because I’m a member of the queer community so I love that. People do often ask me “Do you ever get worried about being typecast as a queer person?” I think every queer character that I played have all been so vastly different and I don’t think straight actors are like “oh I’m worried about being typecast as straight.” Queer people are all very different and they all have very different interests. So, I’m always like “No.” Maybe if I was constantly playing a broody vampire foorrreeever. I mean, I love Carmilla and I would be happy to play her forever but if I went to my next project and it was the same kind of thing, maybe that would get tiresome. But I never get tired of playing queer, and I hope that I get to continue providing positive queer representation and I’m lucky that I’ve had those opportunities. But, I also hope that I get to play characters that have a positive effect on people or touch people and move people in any capacity. Because I think there are straight characters that queer people identify with as well. I want to tell stories, and I want to tell stories that resonate with folks as I shift to roles behind the camera as well. When I get to create my own content I certainly feel a responsibility to provide positive queer onscreen representation. That’s something that I’m working on and do currently. I just wrapped a movie yesterday in Chicago and I play a queer character.

You guys have a really active and loyal fandom. Are you getting the same kind of interaction now versus when the series was still going and there was new content for the fans to talk about?

Yeah, it’s only grown and grown, and its only become even more positive so I’m super lucky. It’s really important to me, when I have time, that I give time back to fans as well. We wouldn’t have been able to make this series last for long and then we wouldn’t have been able to make the film, which was really partially funded by fans, if it weren’t for them so I definitely say that it’s only blossomed. I’m excited to see where it goes and how the fandom grows after the film. Hopefully, even new people join in the Creampuff family.

What initially drew you to this project and did you know anything about the original novella before joining?

I didn’t know about the original novella when I first saw the breakdown for the series, but then I obviously researched it and thought it was very interesting. I’ve always been a huge fan of vampires. I’ve always wanted to play a queer character. I got to kill two birds with one stone.  I think what really drew me to this particular project is one, I was familiar with some of Smokebomb’s work and I knew that their shows always did very well. This surpassed my wildest dreams, I had no idea that Carmilla was going to do quite as well as it did.  But that was a nice draw because I knew it would be in good hands. And then also that so many women were on board. It was produced and written by women. That was such a selling point and I was like “Yeah, I want to be part of this project.”

But even just the initial description of Carmilla and the breakdown, I wish I could remember. It was actually quite long and you usually don’t see breakdowns that long. It was like a paragraph and it instantly drew me to her. I said “I have to audition for this character. I just absolutely have to.” it’s so rare that I feel that way because I think it’s getting better but so often you see breakdowns for female characters and it’s like “fun-loving and pretty” and the fact that you know this had so much weight and Jordan [Hall] did such a beautiful description of her character. It was like “able to turn on the charm at the drop of a hat” and “Languid sarcastic but also capable of profound loneliness” and all of these beautiful descriptors. I was just like “oh my gosh, that’s me. I want to do this.”

What do you think of the current state of queer representation in media in general and how Carmilla fits into that?

I think that there’s still a lot of work to do but I do think that it’s getting better. I think that it’s really important to have shows that are strictly for a queer audience. However, I’m really interested in shows that appeal to a mainstream audience that just have really cool chill queer characters. I think that’s where it needs to go as well. I think we need to see queer male characters that aren’t the token fashion lover, or very flighty and fun loving and the lead girl’s gay best friend. We need to see lesbians that aren’t evil, or don’t die, or aren’t home wreckers. We do have a long way to go. I think that it’s important to have some particular episodes that address their sexuality, but we need to move past that.  Coming out stories are very important, and they were important to tell at a time when people were trying to illustrate the struggles that queer folk have had. The struggles are still there, but can we just integrate it into regular media so that maybe straight folks who love a show and fall in love with a character are like “oh cool they’re gay and its No. Big. Deal.” That would be great. That would be a dream. Or pan or bi characters. I would actually love to see a bi or pansexual character, selfishly as someone who identifies as fluid, that isn’t a promiscuous homewrecker, or doesn’t leave a woman for a man. Or someone who’s a person.

If there was one message that you would like your fans to take away from Carmilla, what would that be?

I think that when you’re honest with yourself and you’re honest about who you are that is when you can really grow and really flourish. That’s something I’ve learned playing Carmilla, even when I auditioned for Carmilla, and I hope that the success of Carmilla is reflective of that because it was very honest. It had a queer producer, we created it for a queer audience, it wasn’t subtext. We were all very open about ourselves. I think that even as actors everyone’s been very genuine. I hope that people take that away from Carmilla as a whole, and as a fandom, and as a brand. In terms of the actual storyline, the message is that it is okay to ask for help and it’s okay to lean on other people and to do things together. I think that’s something that Laura and Carmilla really learn from each other. They both were really stubborn for a long time and thought they could do everything on their own but they were way stronger together. Even with their friends, we see this in the film with the whole Scooby gang, it’s like they are so much stronger together. All of their differences, and the diversity within their friend group, make them a stronger team. I hope that people see that.

Do you have a favorite fan encounter or experience?

It’s so difficult for me to just choose one because I am so incredibly lucky that my fan experiences are so positive. It’s like 99.9% unbelievably positive. One of my favorites though, and actually it’s a little bit weird. One of our fans who was quite known in the Creampuff community passed away in December and she was here at NYCC last year. She was dressed as me, and she gave me like a little fang pin. I still have some of her fan art. She was just such a vibrant young woman. I really hope we dedicate the film to her, I don’t know how to make that happen, but I think that would be cool. But it’s been really cool to see how people have become friends through the fandom, and how they really support each other even through difficult times like that. New friendships have blossomed, I love seeing it online where people are creating this amazing community. People are just so kind to each other and it will be people who are all the way in Australia being friends with people in Norway and it’s just so amazing that it’s created a brighter space in this world.

I know you can’t tell us too much, but do you have a favorite scene in the movie that you are excited about the fans seeing?

I love all of my scenes where I get to have intimate moments with Elise because I really love working with her and I love our chemistry. I think that I do some of my best work with her. Also, I loved working with Dom, we had really good chemistry and a great connection. The scene I was most nervous about, I was also weirdly excited about at the same time but I won’t say more about it until the movie comes out.

Do you think we’ll see you on Wynonna Earp maybe? A crossover?

Um, that would be amazing. I’d love to just be on it, no crossover action. Just being on it would be great, let’s just put that into the ether.

The Carmilla Movie will be released October 27, 2017. Click here to see the official trailer.

Alyssa (TV Editor) likes long walks on the beach, Greek food, talking about television, watching a good sunset, and girls who wear glasses. Wait, this isn't a bio for OKCupid? Alyssa got her start recapping in college when her friends got tired of her constantly talking about TV and suggested she start a blog. The idea was if she wrote about TV she would talk about it less. Well her friends succeeded in one of their goals...she started writing about TV.
@tvwithapb
Previous NYCC 2017: ‘Shadowhunters’ Season 3 – Spookier, More Mysterious and Frightening
Next NYCC 2017: Lore TV Brings Real Life Horror To The Small Screen