Topical, character-driven meditations on society, culture and the human condition have never enjoyed a more fertile groundwork than in today’s media landscape. However, the kind of dialogue-heavy, thematically saturated television projects flocking to cable and streaming outlets in recent years have been largely absent from the major broadcast networks still dependent on more mainstream fare to generate viewership.

NBC’s “The Slap,” an eight-episode miniseries that bowed Thursday night, examines the hot-button issues surrounding contemporary parenting styles within a larger debate between political correctness and personal freedoms blasted constantly from the digital age’s collective mouthpiece. The effort is risky and the results are arguably mixed, but a marquee-ready cast and impressive production pedigree help elevate the ambitious material higher than its precarious footing might have allowed on its own.

Executive producer Walter F. Parkes (“Gladiator, “Men in Black) told reporters at January’s TCA press tour in Los Angeles that the chance to bring such a polarizing subject to primetime was a logical choice in helping NBC align with the industry’s current trajectory.

“This came about, I think, because NBC saw this as an opportunity to do a kind of event that we usually associate with cable,” he admitted, explaining why the trend of limited-run series draws appeal for high-caliber talent both in front of the camera and behind it. “At the end of the day, it does provide, because it doesn’t have the rigors of 22 episodes, because it’s closed‑ended, an opportunity for people to really commit to do something a little bit different, a little bit special. It begins with what’s on the page, and it goes through the director and to these actors, who are really the story here. If, in fact, that’s the way all of television is evolving, I think it’s a good thing, because we’re kind of in a moment of some of the greatest television being made in the history of the medium.”

Adapted by American playwright Jon Robin Baitz from Christos Tsiolkas’ novel and the 2011 Australian miniseries it inspired, “The Slap” presents a revolving chronicle of the events leading up to and following the eponymous incident that takes place during a Brooklyn family’s backyard barbecue. The literary structure, complete with voiceover narration from Victor Garber, is intended to mirror Tsiolkas’ book concept in which each chapter is told from the angle of a different character.

The pilot centers on beleaguered New York City government official Hector (Peter Sarsgaard) on the morning of his 40th birthday party. Passed over for a long-awaited promotion and wallowing in mid-life ennui, Hector indulges in a dangerous flirtation with his children’s underage babysitter (Mackenzie Leigh) and struggles to support his physician wife, Aisha (Thandie Newton), as she battles her own demanding career and seething resentment toward Hector’s overbearing Greek parents (Brian Cox and Maria Tucci). Simmering tension between the couple boils over when the rest of the celebrants arrive, including Hector’s preening, alpha male cousin, Harry (Zachary Quinto), and his polished Manhattanite wife, Sandi (Marin Ireland), Aisha’s bohemian best friend, Rosie (Melissa George, reprising her role from the Australian series), and her artist husband, Gary (Thomas Sadoski), chic TV producer Anouk (Uma Thurman) and her much-younger actor boyfriend (Penn Badgley), and, naturally, Connie the nubile babysitter.

The almost impossibly granola Rosie and Gary are rightfully horrified when a hotheaded Harry impulsively smacks their misbehaving son across the face, but the child’s well-illustrated experience with coddling parental attention and frequent tantrums explains Harry’s decision without necessarily justifying it. The slap strikes more than just nerves, igniting an ugly legal battle and wrenching moral quandary that uncovers long-kept secrets buried among the entire group, challenging the value systems and loyalties of everyone involved.

For George, the opportunity to tailor her role for American television was made all the more enticing when she realized the provocative material was intended for network audiences.

“I think it’s interesting because, as actors, we get a cable script, and we’re excited because producers are not ripping out pages, saying, ‘You can’t say this, you can’t say that, because the advertisers are not going to like it.’ Actors like that because, as an actor, you want freedom of speech. On the other side of that, we get less viewers if we’re on cable,’” she began. “We always say, ‘If I could do this script on a network with the millions and millions and millions of people that are going to tune in every week, we’ve got it.’”

George continued, citing the presence of Baitz, Parkes and director Lisa Cholodenko (“The Kids Are All Right,” “Olive Kitteridge”) as the primary reason “The Slap” works best as a collaborative ensemble that extends beyond the actors and into the entire creative process.

“We have this luxurious poetic dialogue from Robbie Baitz and the direction of Lisa and Walter and all these great actors, and we’re on network TV,” she gushed. “There’s no excuse for this to not deliver. For once, I feel, wow, we might get the viewers, and we’ve got the beautiful dialogue. So I’m hoping that the two roads meet.”

Newton agreed, revealing why she believes “The Slap” might have actually benefitted from the relative constraints that come with a network partnership.

“I feel like with cable … maybe it’s more gratuitous than it needs to be because that’s what people are expecting. Actually, one of the things that was so beautiful about working on this is that, because we had certain restrictions, which weren’t crazy, it meant that we had to dig deeper into the performance in a way. I think that it’s so much nicer for an audience to have to imagine the extremes where you can go … whether it’s violence or sex or whatever,” she declared. “I feel like we didn’t have to compromise. I feel like in our performances, we were free and we were allowed to go places that we wanted to go, and it wasn’t gratuitous. I think it was really very rewarding in that respect and very different.”

Sarsgaard chimed in with a succinct and sobering observation, noting, “On cable, somebody would have shot someone else’s child.”

Despite its deceptively straightforward title, “The Slap” is, of course, metaphorical in both content and context, using the event itself as a symbol to explore deeper layers behind the characters’ diverse motivations and behavior. By focusing each episode on one person’s point of view, the show cultivates a methodical, close-knit narrative Parkes considers crucial for the story to achieve multidudinal pathos. 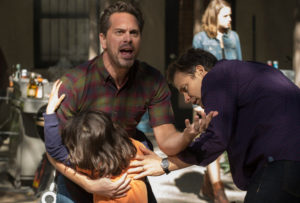 “The slap is a catalyst for a whole lot of things that happen in these people’s lives. One of the metaphors we used during working on this show is that sometimes you have to break something to put it back right,” he began. “So absolutely, what you’re seeing over the course of the eight hours is a kind of working out of these relationships and actually breaking through some of the lies upon which these relationships were built.”

Quinto’s isolated role as the cast’s primary instigator and defendant gave him a unique outlook with which none of his co-stars could relate. As a result, he said, the introspective work he performed to properly convey Harry’s mindset partnered well with the objectivity he developed for the series’ overall intention.

“The interesting thing is it’s not really about the slap, and all of these characters come to the table with a tremendous amount of internal conflict and struggle about different aspects of their lives and relationships. The slap is just this codifying incident that puts all of that into clear relief, and so I think all of us were more interested in the psychological dynamics that are going on outside of the incident of the actual slap,” he said, describing the atmosphere while shooting the key sequence “kind of enjoyable” as an actor, due to the rigorous dedication implemented on set.

“It was very difficult for me personally, obviously, so I didn’t understand how anybody could be motivated to do this until I really got into the idea of what Harry believes he’s defending: the people that he loves, protection, honor, teaching his son what it means to be a man,” Quinto explained. “Even if that’s a really misguided concept.”

For Thurman, the story gave her reason to consider how the evolving definition of acceptable child discipline can demonstrate a society’s specific place in history. According to her interpretation, the family and friends in “The Slap” face an ethical dilemma centuries in the making.

“One of the things I love about the piece is it’s a very interesting cultural exploration of the changing face of how to treat a human being, of compassion, of family, what’s acceptable, what’s not acceptable. I think [Baitz] explores this in terms of the old world, like who can blame their parent who is lashed in the woodshed if they slapped you a few times, and they think they did nothing to you because they were brutalized? They’re blinded by their own trauma from even how they may have behaved. I think [“The Slap”] explores this on a cultural level in a way we really do understand,” she explained, before divulging a bit of precocious widsom from a very close source.

“My daughter is very smart and says, ‘There’s two types of people. There’s reactors, and there’s repeaters,’” Thurman declared. “Which one are you going to be as a person, as a parent? Are you reacting against it? Or are you going to repeat what happened to you? I think it’s very elusive. I think it’s very beautifully explored from many points of view in this piece.“

Whose side are you on? Watch the drama unfold when “The Slap” airs Thursday nights at 8/7c on NBC.

Previous article
‘Fifty Shades of Grey’ is one shade of inexcusable cinematic pain
Next article
Kingsman: The Secret Service Review