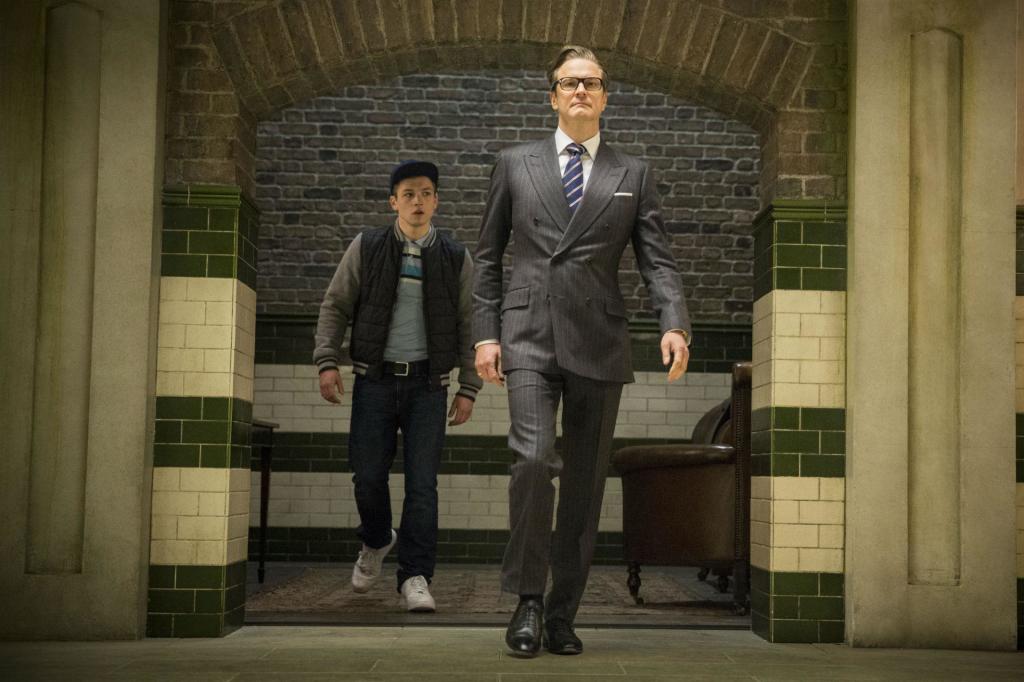 If anything was abundantly clear about Matthew Vaughn’s work directing X-Men: First Class it was that he is a huge fan of the 60s spy genre. That movie played like one of the great, early James Bond films…that is if 007 ever decided to randomly start palling around with mutants. But it was fresh, fun, spectacularly produced, and audiences seemed to be on board with it 110%.

It is therefore no surprise then that Vaughn’s latest film embraces that classic genre in an even bigger way. Kingsman: The Secret Service is a full blown, no holds barred tribute to the films that made secret agents the epitome of cool in the first place. But it is also a high octane action flick featuring bugnuts crazy fight scenes that set the bar extremely high for the popcorn films that will ultimately follow it into theaters later this year.

Set in modern day London, (American spies simply don’t cut it for this kind of flick) the plot revolves around a rebellious young man named Eggsy (Taron Egerton) who falls into the world of espionage by calling in a favor to the deceivingly lethal Harry Hart (Colin Firth). 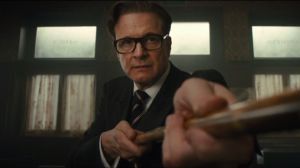 We learn that Eggsy’s father was once an agent alongside Hart in a top secret organization known as Kingsman before he gave his own life to save Hart’s while on a mission in the Middle East. This is all news to Eggsy of course who simply thought his father was in the military and that the sort of “get out of jail free” card that was given to him as a child was a standard gift to all families of fallen soldiers.

So when Eggsy uses his one “save” to get out of jail for stealing a car (amongst other things) he comes face to face with Hart who sees something special in the young man and eventually convinces him to try out for an open position as a Kingsman agent. 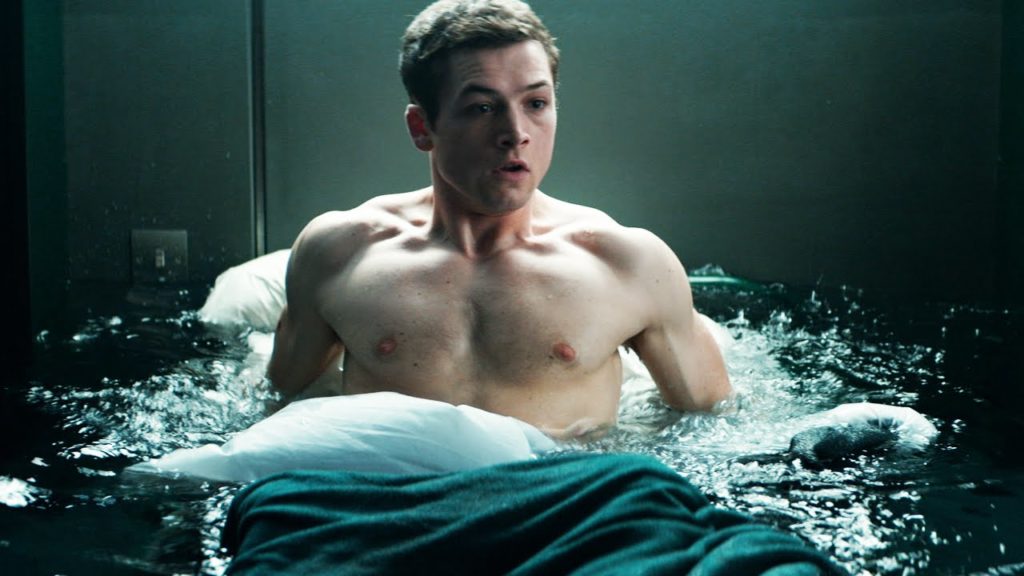 Forced to compete in a series of life or death challenges against the upper class’s most arrogant and uptight offspring, Eggsy finds that spy talents possibly run in the family as Hart tries to teach him everything he knows about being a badass, gentleman spy.

But every movie like this also needs megalomaniac billionaire villain up to no damn good and in this case that role is filled by Samuel L. Jackson like you’ve never heard him before – with a giant, ridiculous lisp. And fighting at his side is the requisite henchman (or henchwoman in this case) with a bizarre physical feature that makes her lethal to her enemies. Her name is Gazelle (Sofia Boutella) and the razor-sharp blades that act as her lower legs have no problem cutting the throats of those trying to get in the way of her boss’s dreams of world domination. 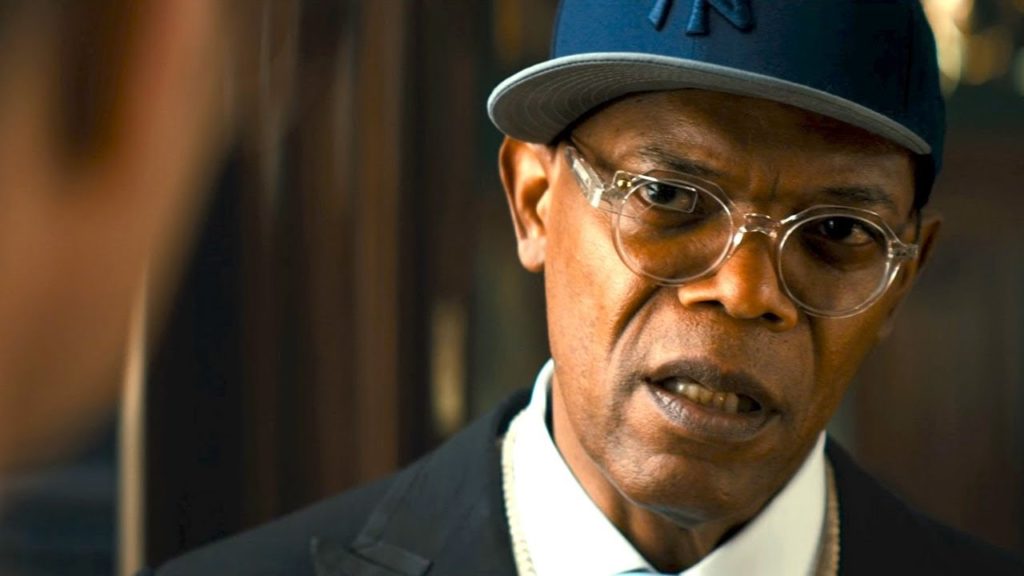 The film has plenty of exciting twists and turns that I don’t want to ruin here but it all comes together beautifully thanks to some aggressive (and VIOLENT) direction by Vaughn and a cast that rounds out even the smallest of supporting roles memorably. Mark Strong, Michael Caine, Mark Hamill, Jack Davenport, and Hanna Alström (as a Scandinavian princess who gets the film’s best line) all deliver stellar work that perfectly straddles the line between comedy and dramatic thriller that Vaughn clearly intended.

But when talking about performances, not nearly enough can be said about Egerton in the lead role of Eggsy. For what is essentially his breakout film role, he absolutely dominates the screen with enough charm and heart to guarantee his future superstardom. 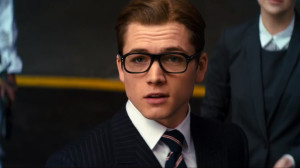 Anyone who doesn’t want to either do him or be him by the end of this movie isn’t doing the whole human thing correctly. Seriously.

But if there is anything that keeps the film from perfection it is that almost all of the jokes and commentary it tries to make about James Bond films and the spy genre in general were already made almost 20 years ago in the Austin Powers films. Kingsman: The Secret Service couldn’t be more different from Mike Myers’ comedic trilogy, but the inspiration is clearly the same and therefore the jokes don’t feel nearly as fresh in Vaughn’s more action-oriented ribbing of the genre.

Don’t let this dissuade you from seeing it though. This movie has a bigger sense of fun and the ability to deliver more sheer joy than any movie I’ve seen in months. Crowds will go absolutely ape for it and I personally can’t wait to take the ride again. So until James Bond is back on our big screens again in November, I’ll stick with the perfect substitutes – Eggsy and an ass-kicking Colin Firth.