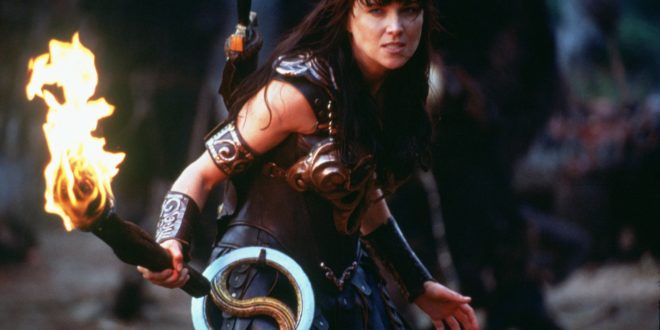 NBC Is In Talks To Reboot ‘Xena: The Warrior Princess’ And I Am So Happy

There’s no bigger fan of Xena than Lucy Lawless and that fact is made perfectly clear every time she makes the media rounds. Even this year during San Diego Comic Con, twenty years after its original run, Lawless still clamors for a Xena reboot. And who can blame her? Just a few weeks ago, I made a list of shows that needed to return to TV and Xena topped that list.

It seems that NBC has heard Lawless and fans cry out for a hero as they are in the process of rebooting the show. Lucy Lawless looks to be involved but in what capacity, we don’t know yet. Things are still in the early stages for Xena 2.0, the very early stages, but the fact remains, we may yet be getting new episodes of Xena. Rejoice.

Of course, as is the case with any reboot, there are concerns about how the show might be handled. Xena was very much a 90’s TV show, riddled with campy humor and a deep suspension of reality. However, its stories and characters have transcended that era and I’ll be damned if I don’t want a reboot bad. The naysayers may try to sink this ship before its even launched, but I have hope.

And NBC, if you’re looking for writers…*wink* *wink*

Don't let the fancy nerd duds deceive you; Jen’s never been described as “classy.” You can find her on Twitter where she stalks all of her favorite celebrities: @jenstayrook. Or you can find her on Steam or Xbox dying in every game she plays as "Rilna." Email: jen.stayrook@theworkprint.com
@jenstayrook
Previous ‘Packed in a Trunk: The Lost Art of Edith Lake Wilkinson’ Interview with Writer Jane Anderson
Next Breaking Records with Shenmue 3

NBC's "Rise" truly is what you would get if you threw "Glee" and "Friday Night Lights" into a blender and then strained and discarded the grainy excess bits everyone hates drinking.