If last week was the fatal car wreck that killed the one we loved, this week’s cold open was the bittersweet video that plays on the living room TV during the low-key wake the deceased requested as part of a list of their final wishes. The episode begins with Elliot and Shayla’s Meet Cute, a flashback where she drops a goldfish bowl in the hallway outside his apartment and begs to be let in to save the ailing Beta Fish that (one would assume) will belong to Elliot one day. The two talk about their lives, have an immediate connection and, of course, Shayla offers to hook him up with premium Morphine, telling Elliot that her drug guy is “a psychopath” but that Elliot is “worth a psychopath”. And all we can do, as an audience, is watch and wince at that line, knowing what comes of Shayla. We’re helpless to stop it. It’s devastatingly bittersweet. 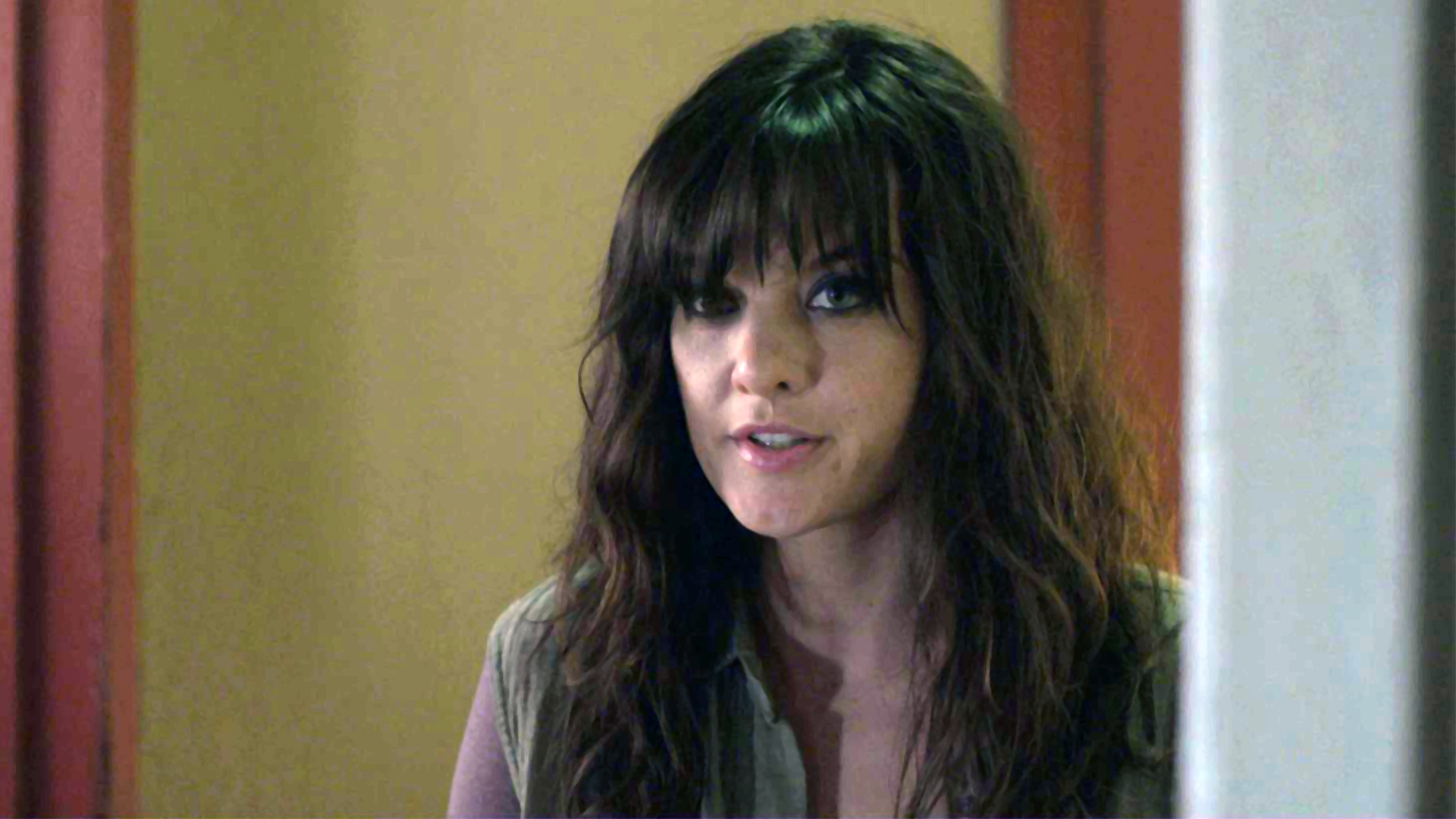 They talk a bit more outside. She smiles at him before leaving and walks away, hands in her pockets, as The Cure’s “Pictures Of You” fittingly plays on the soundtrack, considering what it was inspired by. The scene is beautifully written and incredibly well-directed, having the added benefit of working by default thanks to the earnest performances by Malek and Shaw who have always had such an indelible chemistry. It’s a shame she’s leaving the show. Shayla, we hardly knew ye. In any case, Elliot does the best he can to move on, losing himself in his work, much to Gideon’s chagrin. He wants Elliot to take some time off and says that he’s capable to, once again, “find somebody to be himself with”. Elliot’s amused by this and wonders what it would be like if everyone showed their true selves, much like a website code. He pictures them walking around, wearing signs that say things like, “I PRETEND TO LOVE MY HUSBAND”, “I LIKE FEET” and “I AM EMPTY INSIDE”. 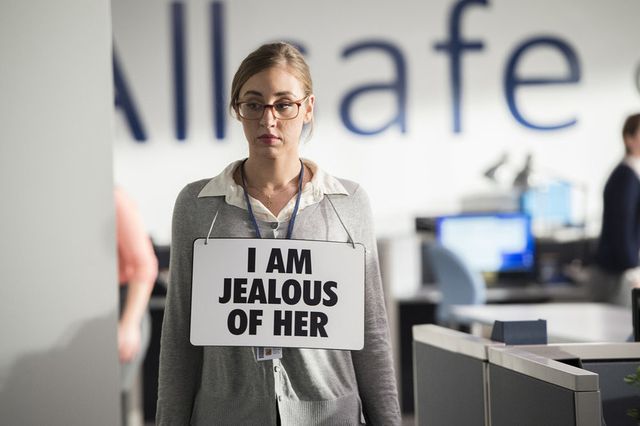 While Elliot mourns and goes back to work, things are getting hairy in the outside world: Angela, in an attempt to get to the bottom of what killed her and Elliot’s respective mother and father, is working with lawyer Nayar to get a deal out of Colby: he will stay out of jail if he admits all wrongdoing. In return, she will say that she broke chain of custody on the Evil Corp hack file. The deal is something Nayar doesn’t believe in and she lets Angela know this in the meeting beforehand. Gideon is also horrified by Angela’s change of heart. He accuses Angela of lying about being out of possession of the file and says her actions will put All Safe out of business completely, but Angela’s on another level, coldly shrugging off Gideon’s concerns. And what of Colby? He thinks he still has power over his situation, over Angela, over it all — and, quite literally, tells Angela to suck his balls. Undeterred, Angela plays her next card: telling Colby that he might still have some money and a roof over his head, but everyone will know Colby is guilty of what happened and everyone he knows will lose respect for him.

After she’s given up and calls Nayar to report that she’s been right about Colby all this time, Angela is surprised to learn that Colby took Angela’s words to heart. She goes back to Colby who is a lot more engaging and embracing. He wants to know, however, what Angela is getting out of this deal. Angela asks Colby what it was like the day the deal was signed to cover up the waste disposal. Colby spins a story about being drunk with his colleagues, eating shrimp cocktail at party and that it was raining outside. Angela repeats those three things, like bold, italic bullet points, and says, “That’s why I’m doing this: so people like you do sit in a room together.” Angela wants to know if he even felt regret doing what he did and Colby says that he did — but that you just move on to the next day, illustrating that this is all business but, at the same time, not personal. The scene is absolutely stunning, especially when you see them back-to-back. To see Colby crumble and turn and twist and try to hold it together is a thing of beauty. Angela breaking him down is a welcome turn, seeing as though he’s had her by the throat in the two previous encounters.

The two other side stories aren’t wonderful.

Since Elliot has taken some time off from fsociety and everything concerning Evil Corp due to Shayla, Mr. Robot has been on a rampage. After reading several news articles about their group, he finds out that the U.S. Government isn’t afraid of fsociety. First, Mr. Robot attempts to pressure Darlene to get the support of The Dark Army again so that they can resume their attacks. He also wants to get a hold of The White Rose. Darlene is just completely unimpressed by all of this, telling him that “God is laughing” at Robot’s plans. 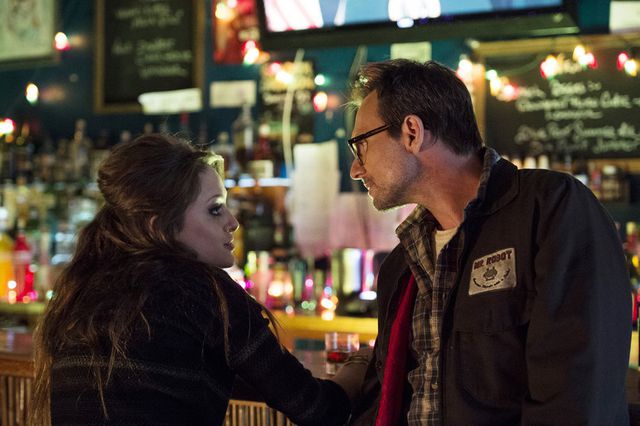 While Darlene learns that White Rose has responded to FSociety’s pleading, Mr. Robot pays a visit to Romero, who is now running a marijuana lab that attracts premium customers due to his ability to genetically modify the plant. Mr. Robot thinks this is cute, but tells Romero that he’s wasting himself on all of this and that he needs to drop everything to come back and help “change the world”. At first, Romero tells him to get bent — but when Robot starts destroying beakers and equipment AND pulls a gun on him, Romero begins to listen. He doesn’t immediately return to the arcade, but we all know that he eventually will. The final piece of the puzzle is Trenton who only agrees to work with Darlene again because, despite her parents emigrating from Iran and believing America to be a great country, “they’re going to die in debit, doing things they didn’t want to do.” 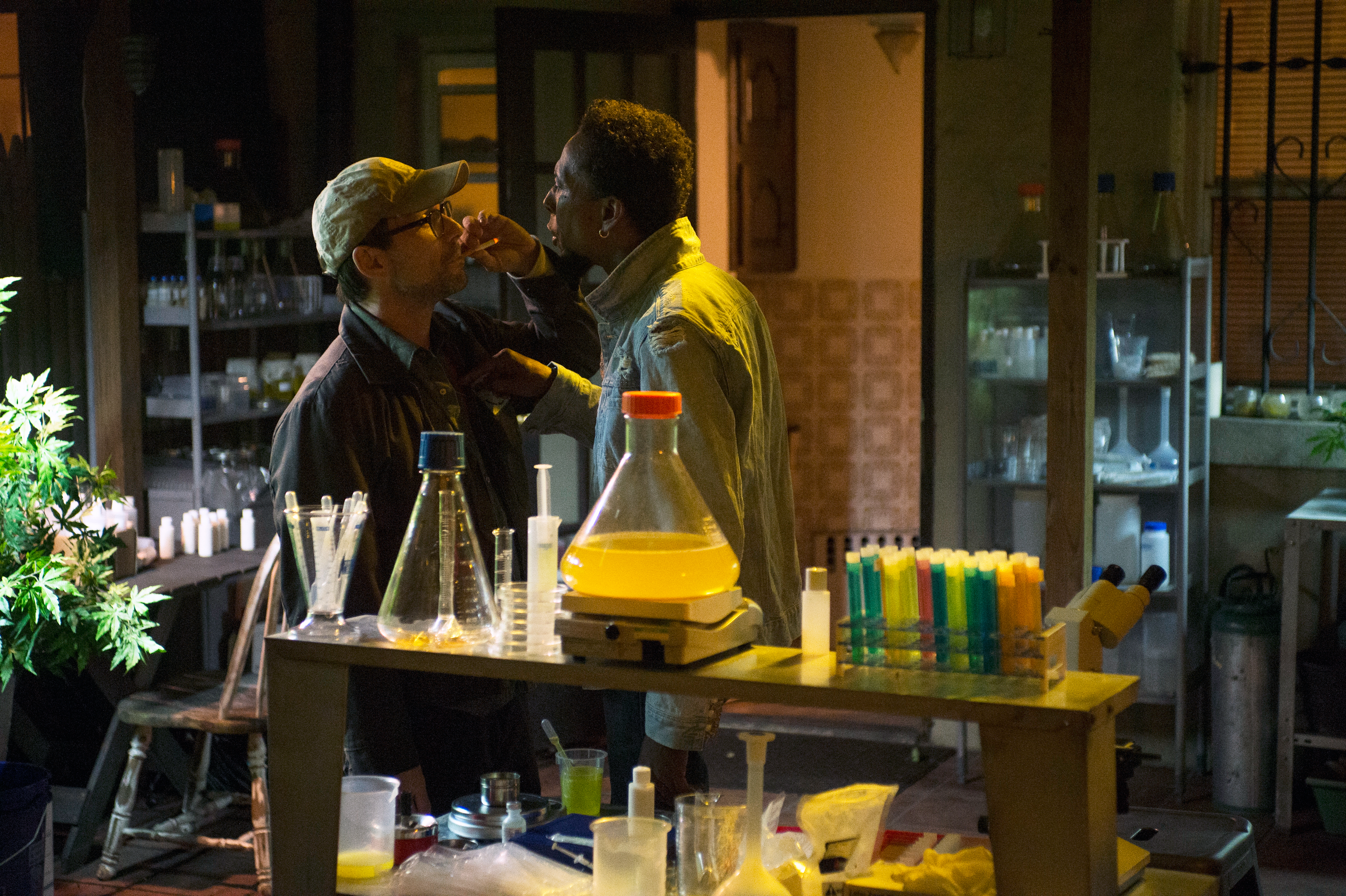 The last bit has to do with Tyrell Wellick and his seduction of Scott Knowles’ wife, Sharon. At first, Tyrell’s attempt seems to fall flat as Sharon simply walks away from him. She won’t meet Tyrell in his office and his request to meet him on the roof seems fruitless — but it happens. She’s there. After some small talk and some taunting on Sharon’s part (“my husband’s downstairs, getting the job that you want and you are trying to fuck me” she says), the two make out to “Two Weeks” by FKA twigs in one of those moments where you’ll never hear the song the same way again. Why? Wellick just straight-up murders Sharon with his bare hands, choking the life from her. The moment is shocking — but what’s the point of something like this? I’m guessing that this is Tyrell getting ahead by taking away what Scott holds dear, but it’s an odd way to go about that, isn’t it? 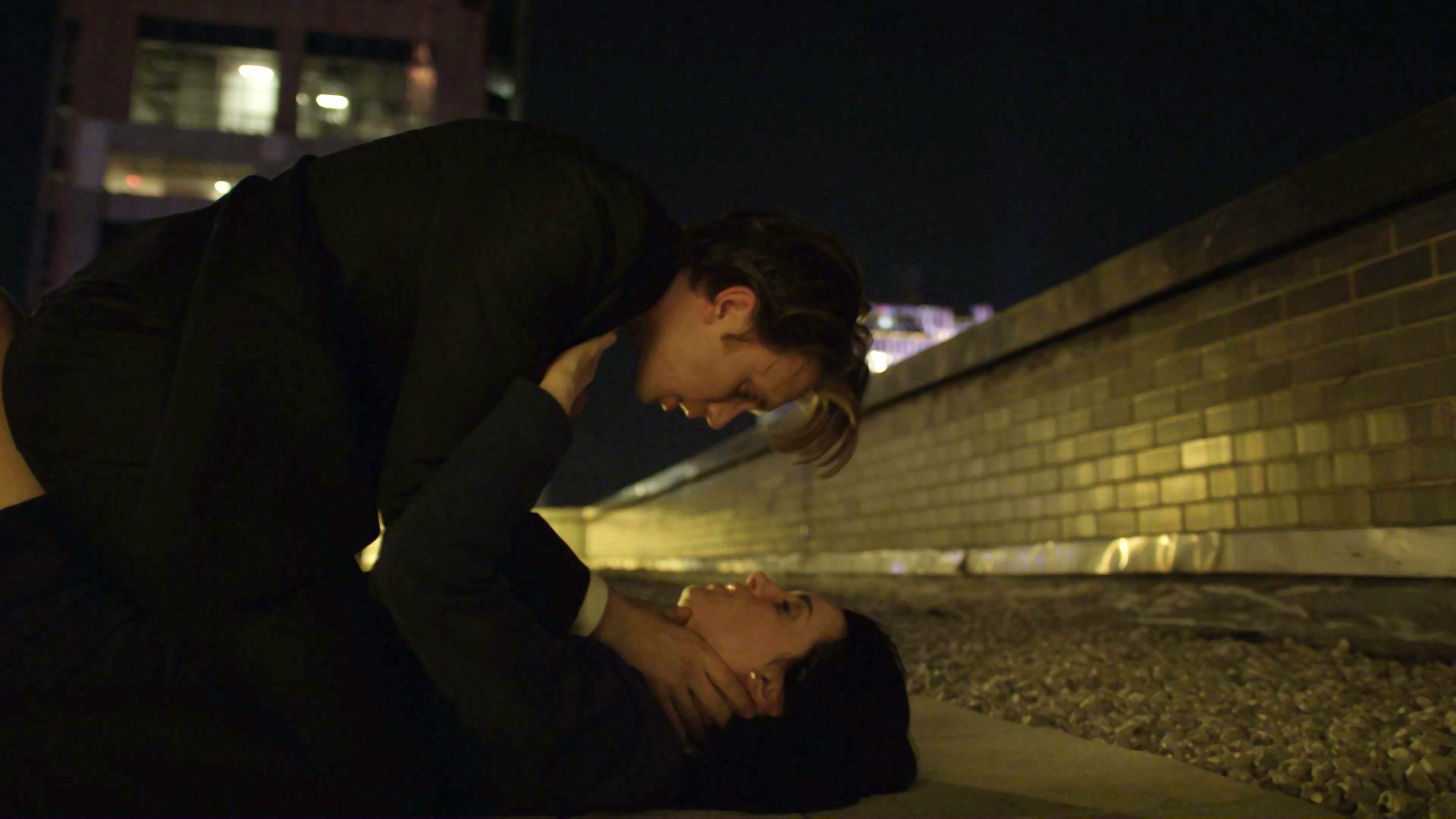 In any case, one of the truly great moments on the show comes from the final scene: Elliot visiting his shrink, Krista. At the beginning of the show, Krista encouraged Elliot to “be honest with himself and others” so that he would cease to be lonely. Through the episode, we see Elliot “burying” Shayla by burning her hack file to a disk (labeling it, “Disintegration” by The Cure) and nuking his drive material so that there was never any evidence of her on his computer — only to see Shayla’s dog eat one of the chips he dropped.

Elliot is ready to be “honest” with Krista and confirms their “doctor-patient confidentiality” clause. After she confirms it, Elliot reveals that he’s been hacking Krista ever since he chose her to be his psych. He tells her that he knows about her overspending habits, about how much porn she enjoys watching, and that she’s on medication. She hates her Mom and she cries all the time because she’s lonely — just like Elliot. He says that it’s nothing personal. He hacks everyone because he wants to help them. He’s doing this because he wants to find a way out of being lonely.

To call this episode a “step down” is probably incorrect on every level. It’s not a step down. It’s good, just like last week — it’s just a little bit disjointed. I appreciate the antics of Mr. Robot and his team and I appreciate the whole Tyrell Wellick story, but those stories were just kind of “present”. They didn’t do much. The rest of what we see (Elliot’s mourning and Angela’s deal with Colby) is top-notch storytelling and builds toward a hell of a finale in which we’ll probably see Angela and Elliot’s worlds come together. The only question is will their relationship still be in one piece after it’s over?