The Goblin Queen (the clone of Jean Grey otherwise known as Madelyne Pryor) and Chasm (Peter Parker’s clone who goes by the name Ben Reilly) team up this December to stoke an Inferno of revenge! These famously wronged clones have their sights set on Spider-Man and the X-Men.

The Dark Web saga starts in December, with series one-shots Dusk and Dawn, written by Zeb Wells, of Amazing Spider-Man fame, and art by the iconic Adam Kubert. Dark Web #1 explores the full extent of Madelyne and Ben’s heinous team-up. The resulting effect on both Spider-Man and the X-Men, and what part Venom has to play, looks… well, dark!

Afterwards, Amazing Spider-Man #15 and 16 continue the story care of Zeb Wells and artist extraordinaire Ed McGuinness. Venom kicks off the action by battling against Peter Parker. We also get answers as to why he’s working with Chasm, leading into the real contest: Peter Parker vs. Ben Reilly in a battle where neither pull any punches! 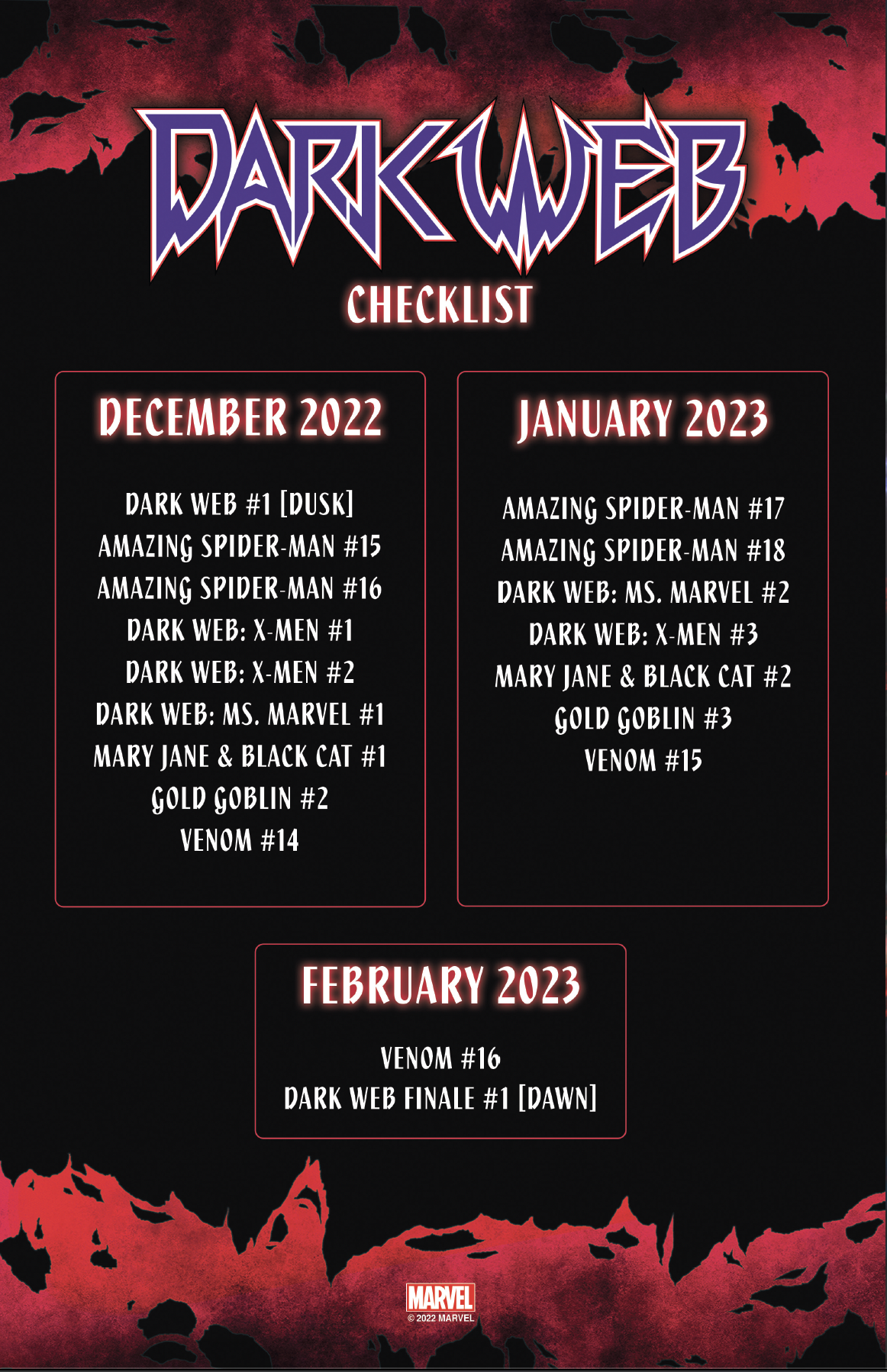 In Dark Web: X-Men #1, Madelyne Pryor has taken control of Limbo, formerly the dominion of Magik, and under her rule a whole bunch of demons are visiting the Big Apple. Cyclops and Havok’s ex has returned for revenge forcing the X-Men to face their less than glorious past with the Goblin Queen! Dark Web: X-Men #2 keeps the party going and might not end the way our heroes are hoping, even with the help of friends.

“You can’t go wrong with the X-Men and their Amazing Friend, Spider-Man. Limbo is attacking NY and threatening to ruin the holidays. Come for the Inferno, stay for Rod Reis!” Duggan said in an interview with ComicBook.com.

Dark Web: Ms. Marvel sees the titular heroine step out from Amazing Spider-Man’s shadow to take on the spotlight in her own limited series.

Think you know Ms. Marvel? Well think again! Prepare to meet a brand new kick-ass Kamala brought to you by Sabir Pirzada, who has worked on Marvel’s Voices and Ms. Marvel on Disney+, with art accompanied by debut artist Francesco Mortarino.

Talk about your tough internship! Poor Kamala has only been at Oscorp for a few weeks when literally all hell breaks loose. After Madelyne and Ben’s evil interloping combines with Oscorp’s already shady experimentation the results are deadly, leaving Ms. Marvel responsible for averting disaster all by her lonesome. Our stretchy super teen is inevitably sucked into Limbo, and driven to battle her way to freedom!

“I could not be more thrilled to return to Kamala’s world after writing her in Marvel’s Voices: Identity and getting a chance to help introduce her to the small screen on Disney+,” Pirzada told Newsarama. “This time around, Kamala’s facing a new challenge: the dangers of Limbo! And a few familiar faces – friends and foes – are bound to make some surprise appearances on this adventure!”

Al Ewing, Bryan Hitch, and Ram V have had an amazing run together and Venom #14 will finally give readers some paydirt! The Goblin Queen along with her new pal Chasm, have been eyeing Eddie Brock and the symbiotes who follow his lead. This issue sees her plans come to fruition as Eddie Brock’s lingering fears from last year are about to come a terrifying head!

Norman Osborn as a hero?

Writer Christopher Cantwell and artist Lan Medina think it’s possible and keep exploring his good fight in Gold Goblin #2. It’s an interesting query where the answer just might be that…maybe it’s not for Normal after all. Dark Web #1 had him up against Chasm, but this new frightening adversary could drive Norman to call it quits on his fledgling good-guy gig!

Dark Web’s got one more power couple to play with: Mary Jane & Black Cat! Yes, two of Peter Parker’s most significant others are getting their own trip to Limbo. Jed MacKay, who has been building a better Black Cat through solo series and the limited series Iron Cat, is furthering her evolution while roping MJ in on the fun!

OK, so fun might not be the right word as MacKay and Vincenzo Carratù (making his thrilling debut as a Marvel Comics artist), will be throwing the girls into Limbo!

It’s something of a gauntlet given the two women have only recently been thrown together and each has her own secrets that will be hindering their escape potential. Mary Jane Watson isn’t her usual self, while Felicia Hardy is carrying around some unresolved guilt.

Will they be able to get their escape plan off the ground!?

And that’s all of them, whew! You can check out the Cover art and credits below. 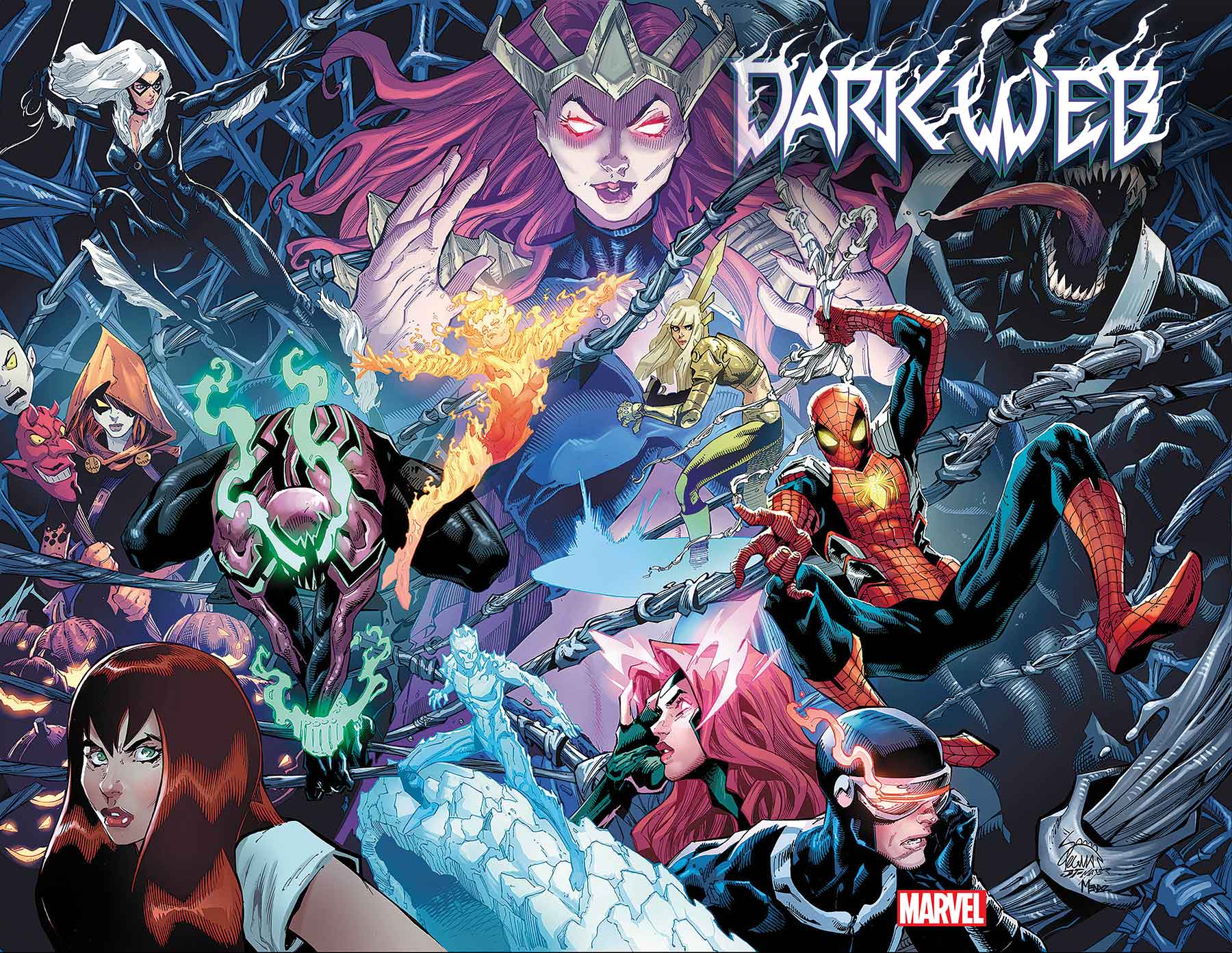 Art and Cover by ADAM KUBERT Art and Cover by BRYAN HITCH Previous article
Find Out All About Thanos’ Terrible Past with Asgard In The New Arc of ‘Thor’!
Next article
‘House of the Dragon’ Episode 5 Review- We Light the Way