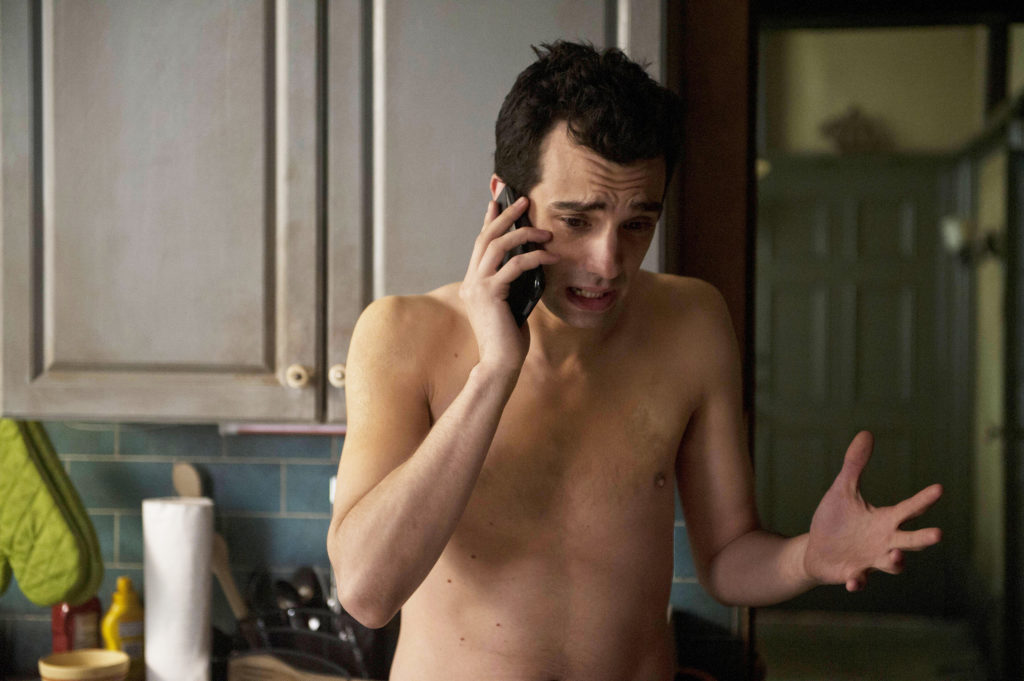 So Bilal asked me to start covering Man Seeking Woman. I assume that he wanted me to start covering it because he liked my writing and not because I’m a career bachelor and extremely neurotic about my love life. I’ve never read the book by Simon Rich, but it’s nice to know that someone out there takes their daydreams and follows them to their logical, if not outlandish conclusions. But anyways, let’s get to the episode.

The show starts with a montage of Josh and his new squeeze Kayla, and how they move from meeting at a party (Karla? Kayla?) to eventually Josh introducing her to his friends as his girlfriend. Any other show would’ve probably spent an episode on this, but this is relatively boring territory for this show, so I’m actually glad they made this into a mashup montage. They go through the obligatory ‘this is a big step’ talk once they get home, until Josh gets into a trademark ‘Man Seeking Woman’ non-sequitur dream sequence. 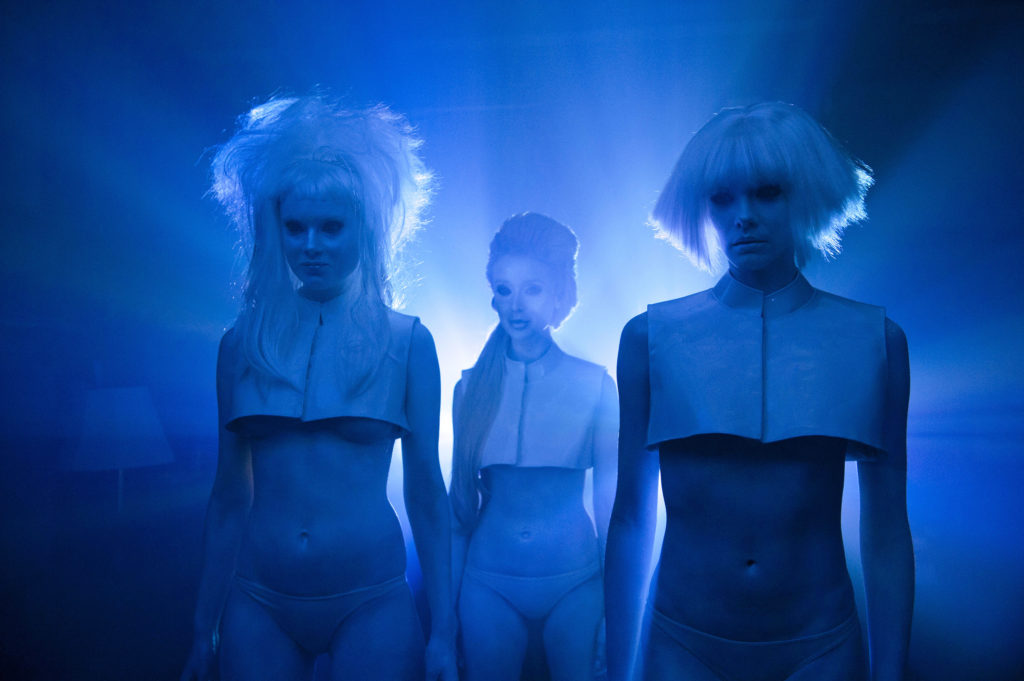 While the sex aliens this week are much less memorable than last week’s friendly neighborhood Tanaka (who needs to become a series regular), it was still a bit of a shock to see bare breasts on TV, albeit nippleless ones. I think every guy has had this imaginary scenario in their head before: I’m in a relationship, I would never cheat no matter how attractive the potential hookup was. Of course, Josh manages to turn away the three blind, naked, nippleless lovers of premature ejaculation in his head and goes on to be happy in the meantime with Kayla. Being a good person in your head is always easier than it is in real life, as we’ll find out later.

Mike on the other hand will have none of it. He sees Josh backsliding into a life destined toward suburbia and sexless monogamy, the key indicator of which is Kayla keeping “work clothes and almond milk” at Josh’s apartment. Josh, lovestruck and in the honeymoon phase, goes to Kayla at work, surprising her with chocolate (of course with sea salt) and asks her to come over for dinner, consisting of “quinoa, and anything else that goes with quinoa.” I’m confident that 97% of single males do not eat quinoa, or kale, or any of that health food nonsense if they had a choice. I actually laughed out loud during that bit, because god, I really don’t like quinoa, I only ever order or make that when I’m on a date.

Mike of course, will not allow Josh to slip quietly into that good night, so he kidnaps Josh and essentially forces him on a Scared Straight course for relationships (Scared Single?). The bit is a pretty predictable, and for me was the least interesting part of the episode, as it goes through the typical motions of the downsides of long-term relationships, the sexlessness, the children, etc. Formulaic, but it does set us up for the last, and most important part of the episode. 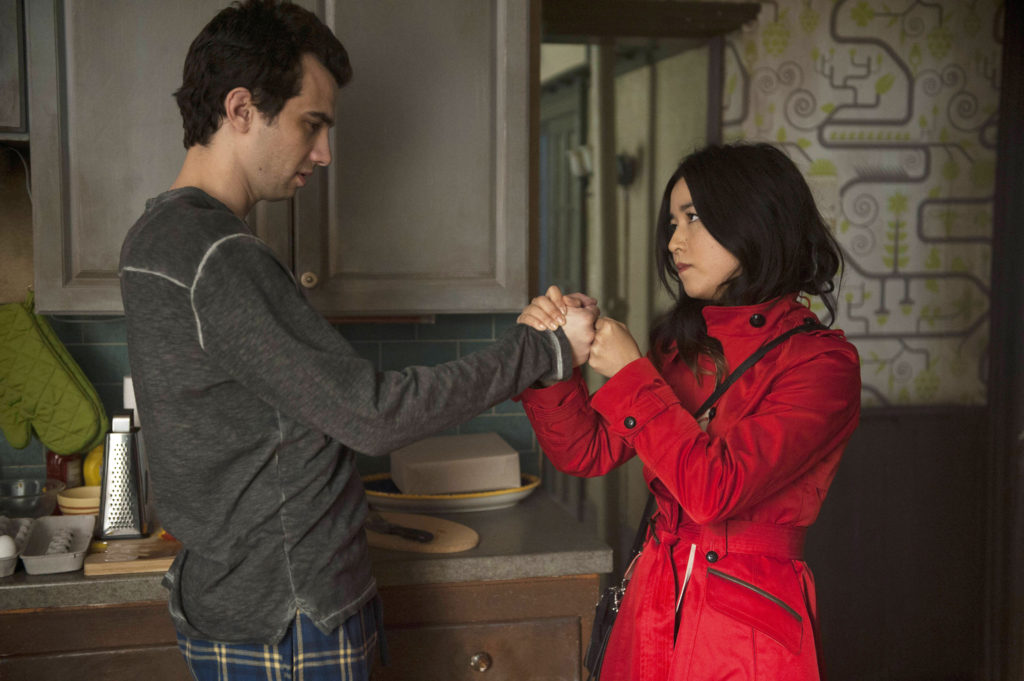 The namesake of the episode is ‘Gavel’. What I like about ‘Man Seeking Woman’ is that while it is extremely self-contained, there is a running narrative through the series so far, which rewards the viewer. Josh is thrown for a loop when Maggie (his longtime girlfriend, now ex) shows up at his doorstep, distraught with her new boyfriend (who I guess is still Adolf). The titular gavel shows up as Josh slides down a slippery slope, canceling his plans with Kayla to console Maggie, and an imaginary judge and courtroom presiding over each and every move. This is what draws me into the show. As a single guy, I’ve been in this situation, and it’s comforting to know that someone else out there has the same running internal monologue. Each time, Josh escapes conviction by heavy use of the word ‘technically’. I’ve been there, and that’s what you say to yourself, but by the end of it, you’re not convincing anyone, least of whom is yourself. It was so easy to turn down the sex aliens Josh, because they weren’t real. But when it’s someone you know, and the opportunity is there and real, how good of a person are you?

Of course, the morning after is a disaster for everyone involved. Maggie is disgusted with herself, Kayla finds out how much a scumbag her boyfriend is, and Josh is left with broken hopes, knowledge that he’s a douche, and of course, he’s again alone.

The lesson here? Nothing good ever comes from making quinoa.

Oh, and I guess don’t delude yourself in a relationship, but the quinoa thing is pretty important too.

@theworkprint
Follow
Previous article
Blomkamp, Scott Team Up For New ‘Alien’ Film
Next article
Someone May Die in Season 5, So Let’s Discuss Which ‘Game of Thrones’ Character It Could Be