In the ‘Killjoys’ Season 2 Finale The Real Enemy is Revealed

So many emotions were felt tonight on the season 2 finale of Syfy’s Killjoys where we finally learned what Khlyen has been up to since the very beginning. Spoiler alert, he’s not really the bad guy after all and that honor goes to his insane daughter and Dutch look-a-like, Aneela.

While we haven’t met her in the flesh yet, we have seen snippets of her through Dutch’s dreams, which still has me believing that they are more deeply connected to each other somehow, in a manner that even Khlyen doesn’t know.

We did discover that Dutch’s former mentor had accidentally found the plasma while researching a way to feed his starving people on Arkyn many years ago. The plants he was testing and growing seemed to thrive on the stuff and so the scientists in his lab ate the fruit from those plants, including his Aneela. Some people grew sick and as he studied it more, he saw that the plasma was taking over it’s host on a cellular level, later on discovering that when inhabiting a human host the plasma became sentient. Khlyen explains that in the early days the pairing was imperfect and so some of them like himself retained a sense of themselves, while others like Aneela became insane and completely taken over. He goes on to tell Dutch that there are no 6’s that are children because their minds cannot handle the transition process. 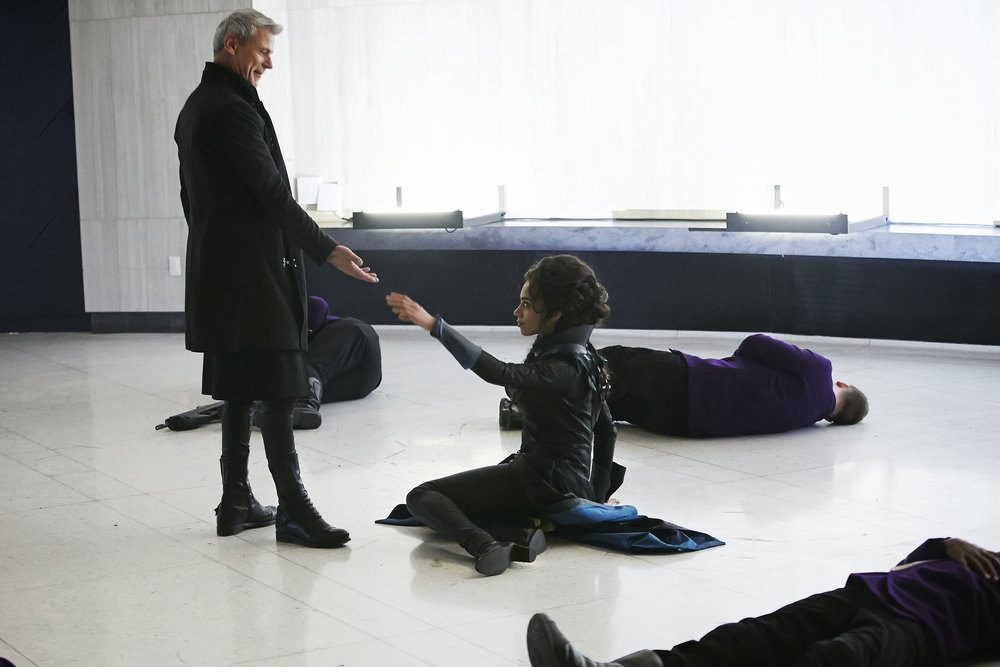 Centuries ago his people came to the Quad and offered the ancestors of the Nine a deal, either accept eventual assimilation or immediate annihilation. Their descendants had ten generations to suck the wealth out of the Quad before the handover to honor that deal. What they’ve been seeing in Old Town is the beginning of that deal. Khlyen’s people are coming back to create more level 6 soldiers through the plasma from Arkyn. A large part of their operation centers on moving from sector to sector to where there are caches of plasma in order to add to their ranks. I suppose there is no way for them to naturally reproduce for baby 6’s to exist and so they have to just create more (kind of like Borg assimilation). I wonder if the plasma’s biological directive is to spread itself like a virus and is using its hosts to carry out that mission.

Khlyen though has gone rogue and is fighting against his own kind because he thought that he could redeem himself by through Dutch, who looked so much like Aneela. While he failed his real daughter, he would not fail her. So every cruelty he’d done had been to train and prepare her for what was coming. Initially he thought he could transition her into a 6 but have her survive via the scarred traumatic experiences. Screwed up way of thinking, but I get it. He wanted Dutch to be strong enough to one day kill Aneela if necessary.

On Lucy he reveals his plan to Team Awesome Force and Fancy. He’s developed a substance that could poison the plasma and save the Quad. When three Black Root agents show up looking for him, Khlyen shoots them with poison darts and a few moments later they begin to vomit plasma which then turns from bright green to black. His idea is to find a source of pure plasma and poison it so that all the plasma on Arkyn would also get ruined. He believed that achieving this would stop his people from invading the Quad because they would have no reason to come anymore.

With help from an ancient Scarback text that showed a star map, the team discovers a system where Aneela had hidden a source of pure plasma that had originally come from Arkyn. It is a tree living in a pool of green goop, the very same that the monks had worshiped and stolen from the moon many years ago. Khlyen’s daughter hid it in a floating facility called the Archive where the wealthy and elite have been storing their treasures for eons. They hatch a mission to infiltrate and get access to Aneela’s vault with Dutch reclaiming her old identity as Yalena Yardeen, the scion of a once wealthy family. 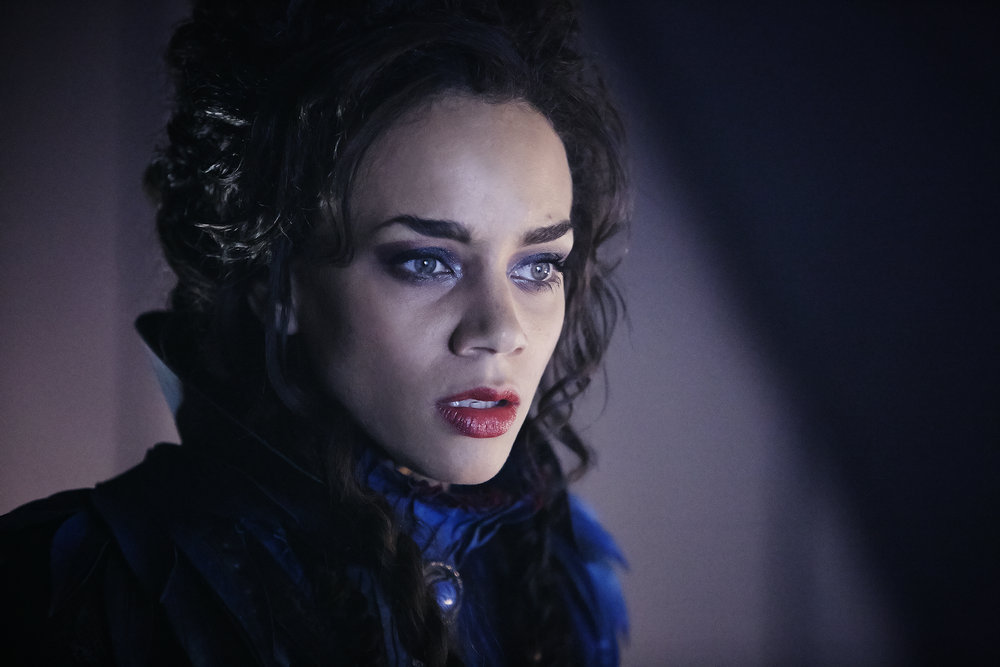 Dutch goes into the facility with Khlyen, Fancy and D’Avin and meets with the custodian, played by Lost Girl alum Richard Howland. He played the fae Blood King, Fitzpatrick “Trick” McCorrigan. Only Khlyen accompanies her to open an Archive account, which involves a blood sample for DNA identification. In the lobby area things take a violent turn when Fancy and D’Av are attacked by the guards (whom they beat) and then the duo heads downstairs into the lower levels to attach a device that would allow Lucy access to Archive’s computer system. After Dutch gives her blood sample Lucy change the genome id for Aneela’s vault to the killjoy’s.

The custodian though knows something’s up with Khlyen and Dutch and calls in his goons. The two defeat the squad of men but are unable to do anything to the leader because killing him would trigger a very large explosion. The former student and teacher head off in search of Aneela’s vault and manages to find it, but just their luck it is orbiting near a sun. This apparently is the pricey highly secure gold package. Dutch accidentally trips a security features which nearly results in the two of them burning to death. They try adding Khlyen’s toxin but it doesn’t seem to work on the green pool. Freaking out, she asks Johnny what to do and he says that from Lucy’s analysis of the black gunk earlier, they have to poison a 6 first and then use that corrupted plasma to taint the pure source. So without hesitation, Khlyen injects himself and explains that he failed to protect Aneela from herself and so this was his penance. Apparently she and others like her used the lab in Red 17 to increase the plasma bond and make people into slaves. They share an incredibly emotional moment as he finally lets his guard down and says that when he saw her he had a chance to make things right. When Dutch angrily says that he was going to force her to change as well he explains that originally yes because he wanted to keep her with him and did what he did so that she would be able to survive the process. But D’Av provided a third option and now he can set her free.

He also reveals that Aneela’s goal is to conquer the whole universe and that while they are poisoning this plasma source there are others in the J. A teary Dutch says she’s not ready to let him go and he starts reciting the story he used to tell her as child. Their plan works and all the plasma on Arkyn turns black just as it did in the source.

After Khlyen’s death, Dutch talks to D’Av and Fancy (who is now back to his regular self) at the Royale and proposes that they take the fight to Aneela herself to honor the deaths of the people they’ve lost. The episode ends with Johnny sneaking away after shooting Delle Seyah as revenge for Pawter’s death. Lucy calls up Clara to keep her favorite killjoy company and the audience is left with a sense of new possibilities as these two go off to new places and Dutch and D’Av (with Fancy maybe?) go in search of Aneela and her people to kick their ass. 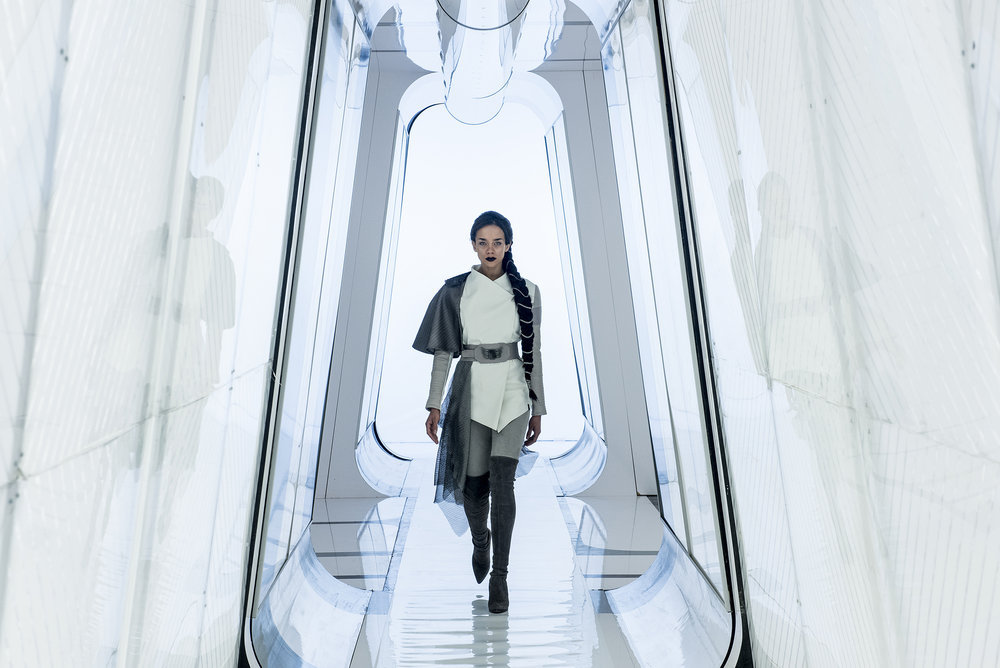 Season 2 was great storytelling as our characters encountered one difficult situation after another and the stakes continued to be raised week after week. While it was unfortunate that each member of Team Awesome Force had to deal with the loss of someone they cared about, it only made them stronger and hopefully strengthened their bonds to each other (even though Johnny is distancing himself right now for safety’s sake). And while the Killjoys universe expanded a bit this season out of the Quad, I’m looking forward to meeting a whole new set of characters in Khlyen’s people and of course the enigmatic Aneela at last. We’ll finally see for ourselves how insane and evil she really is. Also I hope they explain what the military really did to D’Av that he’s become the plasma whisperer. Luckily we’ll have the chance to find out as Syfy has renewed the show for a season 3.

Lastly here’s a little something from the Killjoys team to get us through hiatus until next season:

We’re kind of excited for the season finale of #killjoys tonight.