While this season of Dead of Summer showed viewers what Camp Stillwater was like for the counselors who were main characters, the story of the other counselors have yet to be told. These are the experiences from Camp Stillwater as told by the forgotten counselors.

(And if you want to get caught up on all the happenings at Camp Stillwater, check out my reviews.) 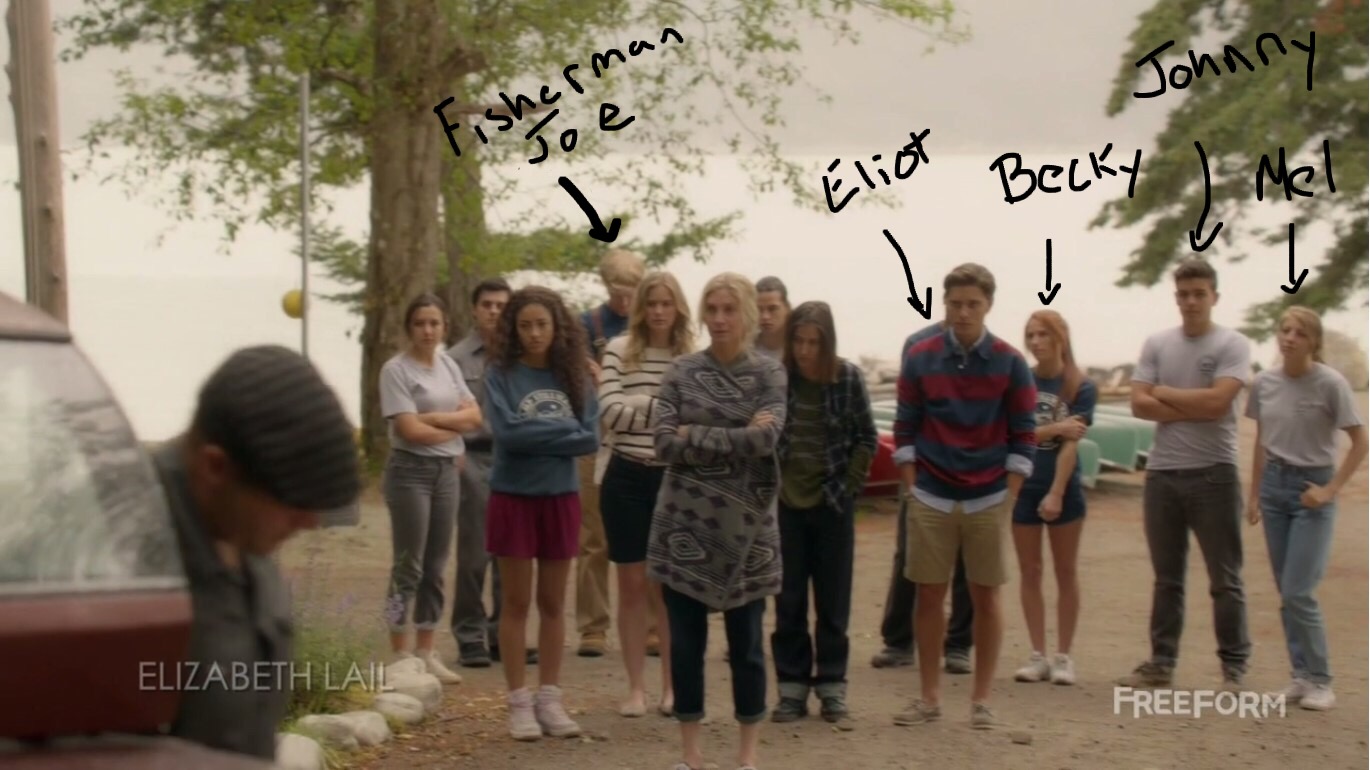 Well, today was my first day as a counselor at Camp Stillwater and it was awesome to meet the kids. It was weird though, apparently a group of counselors came up early to help the Camp Director, Deb Carpenter, set up 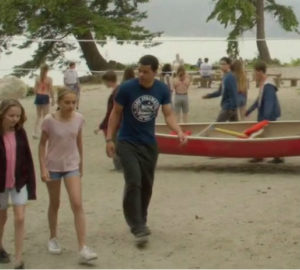 camp. There are actually a few of us who were not asked to help set up. Maybe that is why Ms. Carpenter had us carry all of the campers’ bags while the others stood around with clipboards, because they had spent the previous few days doing so much heavy lifting. Actually, now that I think about it, only the counselors that came up early are in charge of a bunk. The rest of us all share a separate cabin with no campers in it. Our main job is to watch the campers when those other counselors are off doing their own thing. I don’t mind it though; I would rather spend time with the kids during the day than have to deal with them being home sick at night. Woohoo! I can’t wait for this to be the best summer ever.

Yesterday was so crazy I didn’t even get to write in my journal. A ton of things happened. First, a kid went missing in the woods and the local cops had to come to help find him. We were just hanging out in our ‘counselor only’ cabin and only realized what was going on when we saw the lights on the police car. Then, this morning, Blotter (one of the ‘Chosen Counselors’) as we in the Counselor Cabin are now calling them get fired because he was tripping acid when the kid went missing. None of us even found out about it until we got to breakfast this morning. Good riddance, I say! If you walk around camp with a baby bottle and make people call you Blotter, you should not be taking care of kids. You would think Ms. Carpenter would have moved one of us into Cabin 10 to help Alex out, but she didn’t. I guess Alex will have to handle those campers all by himself. I am fine with that because there is a cute redhead named Becky in the Counselor Cabin who I am hitting it off with. So the closer I am to her the better. But there is also this weird guy who calls himself ‘Fisherman Joe.’ I am pretty sure he only brought one pair of pants to camp,  fisherman overalls, and only ever wears the same Camp Stillwater shirt. I am not even sure he brought a shirt of his own and he just expected the camp to give him a free one. How weird is that!  Also, me and the boys snuck into Blotter’s cabin and found a ton of weed he left behind. And man, it is good shit. 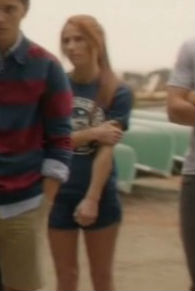 So tonight’s movie night and I just found out that Deb is giving some of the Chosen Counselor’s the night off. I don’t understand why they get the night off and we aren’t even given the option. I mean, one of their own was just fired and they get a reward? What are we, chopped liver? But the only thing to do around here is to go to the shitty local townie bar, so it is not like we are missing out. Also, Eliot stole the weed from that Blotter kid so we have plenty to do here. Speaking of Eliot, he is going to be at movie night so there would be no reason for me to go into town anyway.  Eliot is so amazing and cute. I am so happy we got to share a bunk without any campers! This really is the best summer ever.

Yesterday, while playing beach volleyball with the campers one of the Chosen Counselors, Amy, got struck by lightning. It was so scary. Me and Mel had to spend the rest of the night calming down the campers because the Chosen Counselors spent the night together in their staff lounge. We still aren’t allowed in the lounge. I heard they have a phone in there. But the craziest part is Amy was fine! She came back to camp this morning and we are having a masquerade dance tonight to celebrate it. I still can’t decide what to wear, I want to make sure it is something that will impress Eliot. 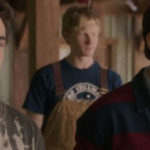 Happy Fourth of July! To celebrate the great U.S of A., Deb planned a whole camp-wide camping trip. I love the outdoors so much. Since I am certified in first aid Deb designated me as the nurse for the trip.

Deb is the coolest, she lets me do so many things. I even get to run the fishing program at camp. Sadly no campers have come to the activity yet, but I have faith that they will! She also let me try my hand at landscaping the other day because she doesn’t have a groundskeeper. I got to plant plants and trim bushes!

I am learning so much at Camp Stillwater.

Last night on the camping trip, Cricket died. I heard that she fell into 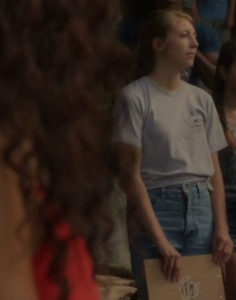 a bear trap. It is just so sad, the entire time we were hiking she was warning us about those bear traps. Since Deb cancelled all of the activities today and all of the Chosen Counselors are grieving together, we are responsible for the campers. I don’t know how to explain to them what happened. Do I pretend everything is okay and laugh and play with them? Do I just let them cry? I wish that there was an adult here to tell me what to do! I am so glad I have Johnny here to help me through it though. Last night, after the campers went to bed we went off and we went all the way. It was magical, but it is scary to think that we could have accidentally fallen into a bear trap and died. I know I have only known him for 9 days, but I think I am in love. 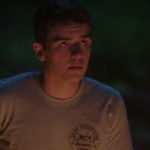 Woohoo COLOR WAR TIME! BLUE IS GONNA WIN! Is it weird to be celebrating color wars just two days after Cricket died? I mean we have to lift everyone’s spirits up somehow right? We can’t let something like that ruin our whole summer. It also gave me a reason to “console” Mel if you know what I mean. 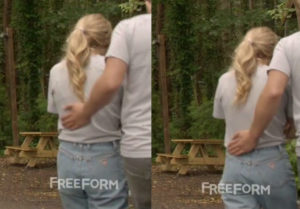 She is getting a bit clingy, I hope she doesn’t think this is serious. I’m at camp. I am here to have fun. I don’t need a relationship! Also, Eliot told me he saw the sheriff handing out walkie-talkies to all of the Chosen Counselors. I wonder what that is about?

We just found out today is the last day of camp. Apparently last night satanic worshipers were running around camp and killed the town’s sheriff . You want you know how I found out about this? FROM A CAMPER! Deb didn’t even have the courtesy of tell us that a) There was a murder on campgrounds and b) that camp was closing. No, because of course she only told her precious Chosen Counselors who in turn told their campers who in turn told us! The bus isn’t coming to pick the campers up until tomorrow but we in the Counselor Cabin have decided enough is enough. We are not waiting until tomorrow to leave, we are leaving today. Johnny found the keys to Deb’s truck and we are all going to pile in the back, drive to the bus station and leave it there. I bet they won’t even realize we have left. This camp is a shit hole, but at least I left with an awesome group of new friends.

And that is how everyone in the Stillwater Counselor Cabin left camp alive and lived happily ever after. THE END.

@theworkprint
Follow
Previous article
Pull It Together Episode 3: Marvel Madness
Next article
In the ‘Killjoys’ Season 2 Finale The Real Enemy is Revealed