This week on #DarkMatter: Android gets more kisses; the Diagnostic returns; Three gets sentimental.

Ooooooooo are we at the infamous betrayal yet, Dark Matter? I can smell it coming. I don’t think the Android’s actions in this week’s episode, “Take the Shot,” constitute a betrayal, but I definitely think we’ve been setting up for one for a long time coming.

(I swear, if it’s not Four at this point, I will be SHOCKED.)

I’ve mentioned how much I love Two and Five’s relationship, right? Good. Because it’s amazing. I love the mentorship, the strength, and most importantly, the honesty. This week in “Take the Shot”, their relationship is definitely tested. When the Android tells the truth about her dream and then the diagnostic, Five is forced to fess up about deleting the diagnostic’s data files. Though, in Five’s defense, they were immediately imprisoned after that and then One died and then they were almost killed like 18 times, so you can see how that tidbit slipped her mind. 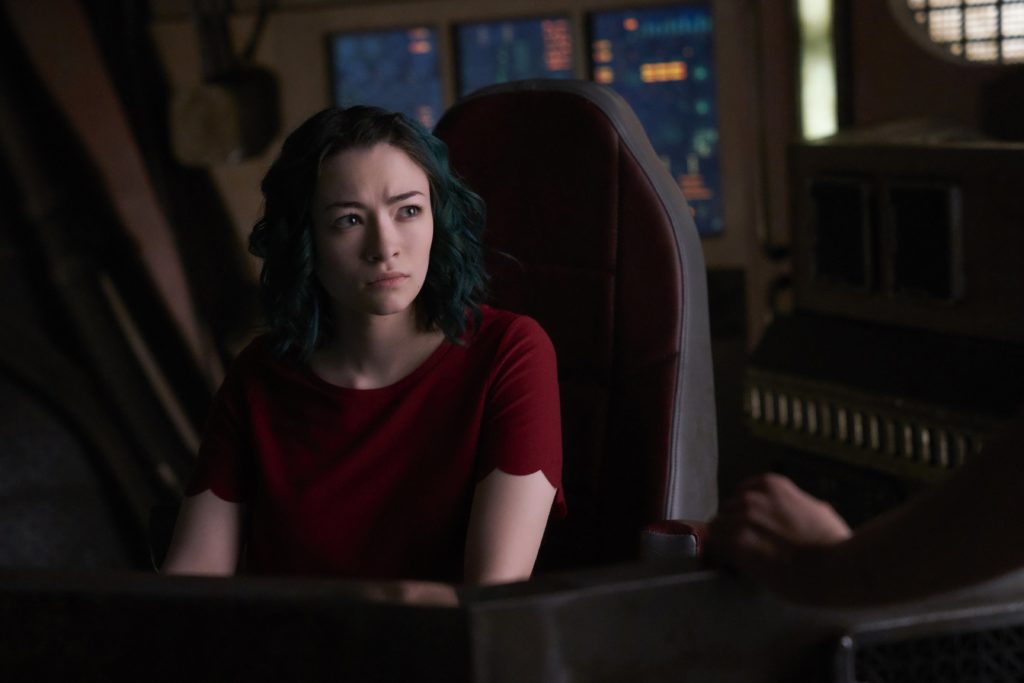 Two isn’t as trusting of the Android’s flaws and she agrees with the Android’s decision to shut her down for the time being. This leads to a confrontation between Two and Five:

Two: “The fact is, we cannot afford to have an android that makes mistakes.”
Five: “No one on this ship is in a position to criticize.”
Two: “It’s only temporary. At least until we can figure this out.”
Five: “What if there’s nothing to figure out? What if this is just the way she is? If we delete her personality matrix and start over, that’s the same as killing her!”

Much like Kaylee in Firefly, the Raza goes as Five goes. She is the heart of the ship, the one who leads ultimately leads the crew back the best versions of themselves. That’s not to say she’s without mistakes, but her heart is in the right place and it’s that heart Two puts her trust in when she willingly risks her life to save the crew, the Android, and the Raza.

The basic premise of “Take the Shot” feels oddly familiar, not quite a rip-off of previous arcs, but similar enough that it made me question whether or not I’d already seen it. Two, Three, and Four all suffer from psychotic episodes due to their neural links which have been infected by the virus on the Raza. All three are faced with regrets, but Two and Four rue the ones they didn’t kill which Three laments the one he couldn’t save. What beauty.

Two and Four both have visions of revenge and their realities take dark turns when they are faced with their respective home worlds. Four battles Misaki from Zairon and loses while Two is captured by Rook’s scientists, intent on finishing the job. 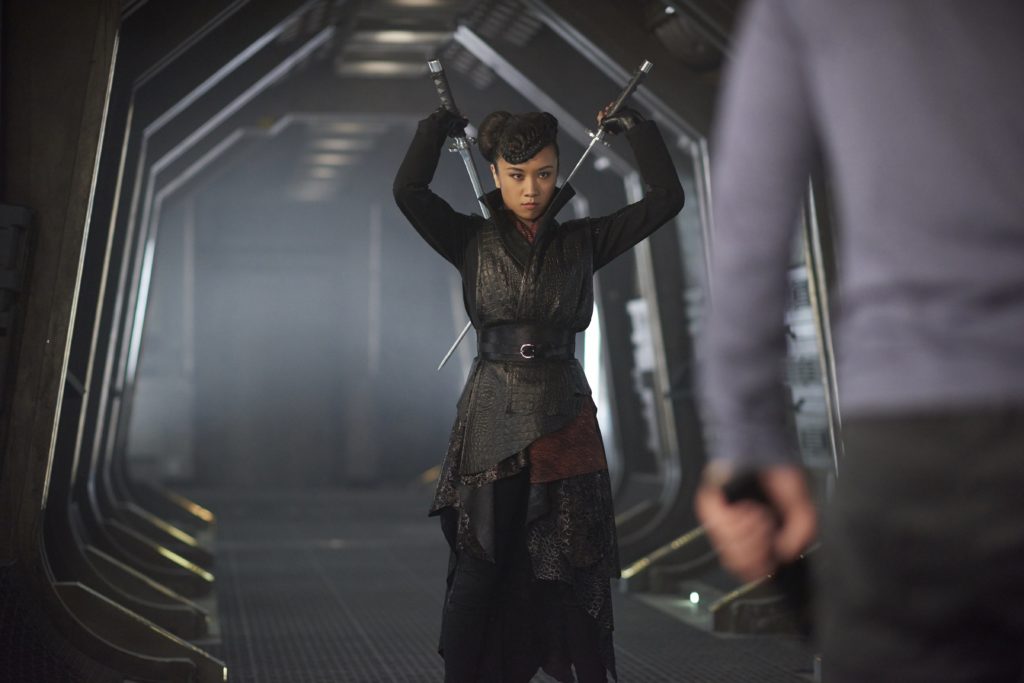 Oddly enough, it’s Three who has the gentler hallucination. Given his history of late, I shouldn’t even be surprised, but still, I’m shocked when the gruff Three shows a softer side. Sarah appears in his room and despite knowing she died, despite not remembering their romance, he caves and lets her coax him into putting a gun to his head.

What’s most interesting to me about this sequence is that Three does eventually pull the trigger on himself, only Six is there to tackle him, thereby preventing the deadly blow. However, later in the episode when Two directs Three to “Take the shot” that would kill the Android, he hesitates. He reminds himself over and over that she is “just a machine”, but ultimately he’s relieved he doesn’t have to go through with it.

He loves the Android, the big softie.

The real heart of this week’s episode is about the Android and whether or not she wants to remain loyal the crew of the Raza or to herself. When Nyx and Three take the Android back to her charging station, she tells them that if faced with what would essentially be her death, she’d rather be allowed to go her own way off the Raza. Nyx and Three are understandably confused by this bout of humanity from the Android and I have no doubt this later influences Three when he is asked to kill her.

Back on the charging station, the Android goes back to her dream world with Victor and they discuss her future. The Android is clearly distressed by the possibility of a life without the crew of the Raza:

Victor: “Your crew will never fully accept you for who you are. Sooner or later, they will turn against you.”
Android: (With tears in her eyes) “They’re my friends.”
Victor: “I’m a voice inside your own head. You already know it’s true.”

And yet, because of the diagnostic, she knows that she’s not the android she should be and also not quite human. Being torn between the two worlds causes her to linger with Victor a little longer. With dream Victor, she doesn’t have to make a decision right away. Ultimately, the real world and the diagnostic’s treachery come crashing down and the Android is forced to choose.

And she chooses the Raza over her own independence. 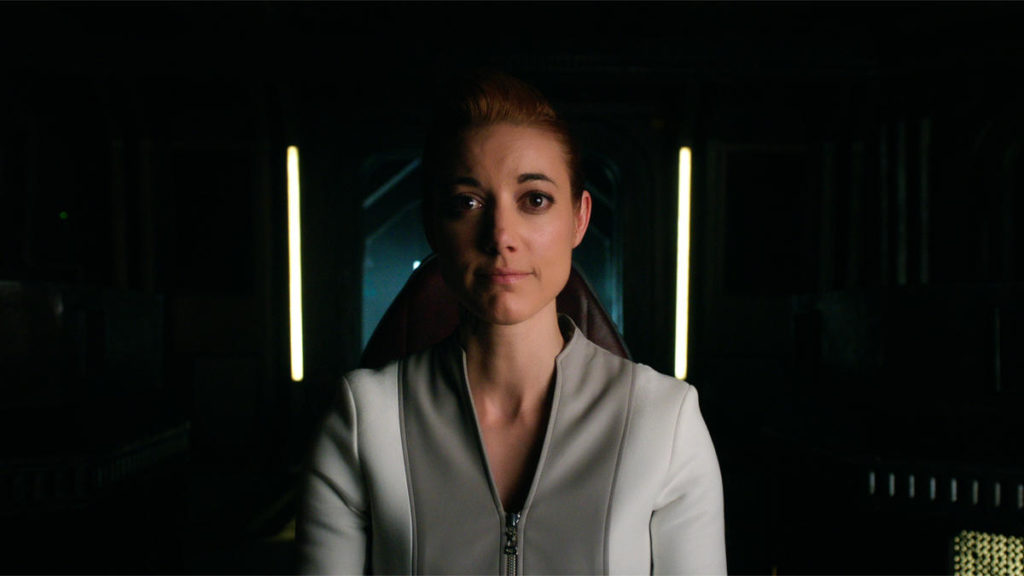 But even at the end of it all, she recognizes her faults and instead of feeling guilty for them, she accepts them and makes it known to the crew:

Android: “I should warn you: although I’ll do my very best, I can’t guarantee I won’t make another mistake.”
Two: “You’re our ship’s Android, and we need you.”

It’s IMPOSSIBLE not to love the Android.

The Descent of Four

After his face-off with Misaki and then keeping the neural implant from “Old Ryo”, it’s pretty clear some bad things are about to happen with Four, right? Unlike the Android, Four hasn’t outwardly owned up to his guilt about Zairon. It haunts him in the same way that Misaki did during his hallucination. He knows he left his home planet to die in a long and bitter war and without the memories of who to trust, he can’t, in good faith, take back his crown.

But now he has those memories.

Maybe he’ll leave a video log for himself, detailing the “New Ryo” and his way of life, his kinder side, but I imagine Four is about to leave the crew of the Raza. Maybe even for good.

That ending felt a smidge too easy, no? I mean, by all accounts, Two should be dead and I still don’t fully understand the virus thing, but instead it’s all wiped away and Two is just unconscious for a bit because her nanites protected her? Don’t get me wrong, I’m GLAD she’s alive, but it all wrapped about a bit too nicely for the world of Dark Matter.

That can’t possibly be the end of Victor and his group of Androids, can it? It seems way too important in the world to just ignore.

I think I’m starting to see some of the issues people have with Dark Matter. I LOVE the Raza and its crew but we’re watching a sci-fi show and I want to see the different planets and cultures. I want the technology and the ridiculous glasses that Three wears. I want to understand the differences between the corporations and not just lump them all into one bad entity.

That being said, I loved this episode. I love any episode that explores the Android’s humanity.