This week on iZombie: Liv is a Dungeon Master, the anti-Zombie militia is in full swing and an old enemy returns.

“Twenty-sided, Die” was the best episode of iZombie this season by far. Liv’s Brain was integrated into the other storylines of the episode and the episode did an excellent job of starting to connect the lines between all of the small mysteries that have emerged throughout the season.

Brain of the Week

Cause of Death: Poisoned mead during his weekly D&D game with Jimmy the Sketch Bitch and Vampire Steve. 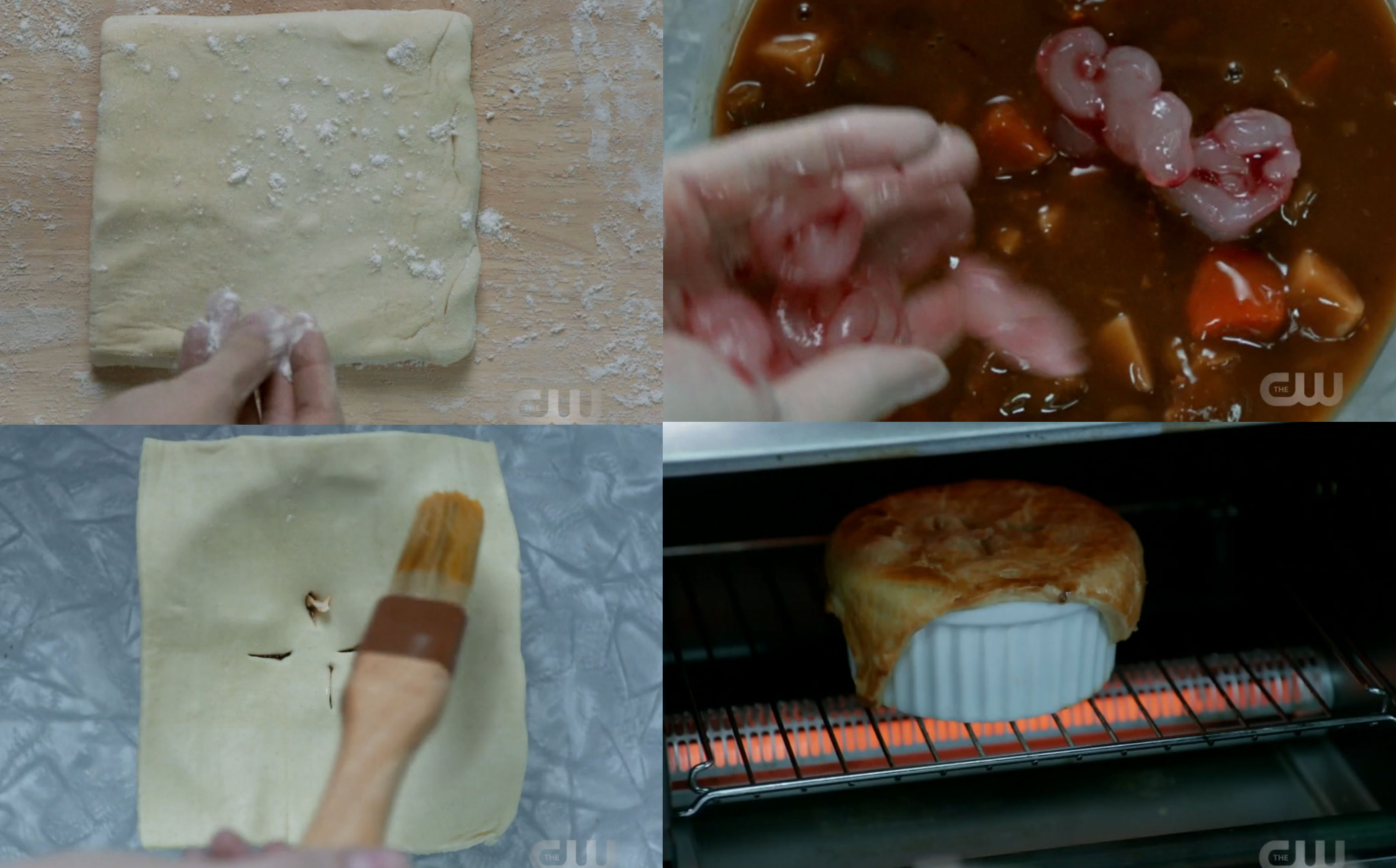 This hearty meal is exactly what Liv needs to fuel her next Dungeon and Dragons campaign. It should be noted that everything I know about D&D comes straight from Stranger Things and that one episode of Community (Community how I miss tee). As expected, everyone on Team Z (besides Liv) is less than thrilled at the prospect of playing D&D all night. Except for Ravi, who is trying to pretend that playing D&D with Team Z is not what his dreams are made of.

Within seconds of starting the quest, Peyton’s character dies. However, against every single one of her wishes, Ravi revives her and saves her life, forcing Peyton to stay in the game. A couple of hours in (or at least a pint of beer in) every single person is fully enthralled in the game. Except for Peyton who still could not care any less if she tried. Clive is the most invested in the game, though. ALL HE WANTS TO KNOW IS WHERE THE LITCH IS. When he finds it, he cuts the Litch’s head off, and Clive is the proudest papa you have ever seen. 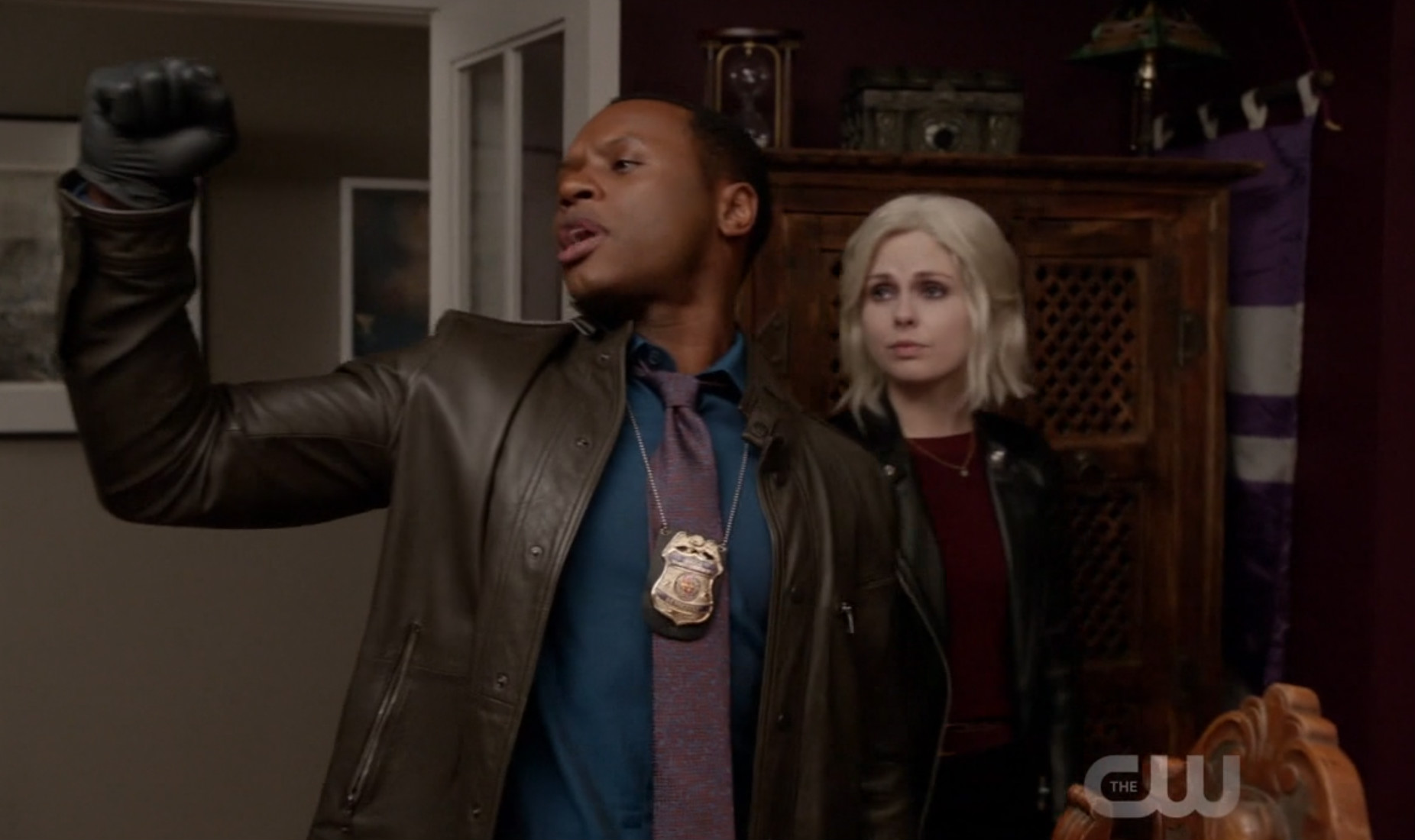 Towards the end of the game, Liv has a vision where she sees Dan’s secret hidden computer room where he hacks the Russian government. Now that Russian Hackers are involved, the case is put in the very trusting hands of the FBI, because why not add another Russian Hacking case to their huge pile? Clive is surprised to find out that his ex, Dale Bozzio is the lead detective. (Just a quick refresher, Clive and Bozzio worked on the Chaos Killer case last year and also dated. When Clive learned the truth about zombies and realized that Major was innocent, he went behind Bozzio’s back and got Major released resulting in Bozzio breaking off both their romantic and professional relationships.)

So, when Clive discovers that Dale’s in the area he runs out to catch her and hopefully talk. When he finally reaches her, he pours his heart out to her

Clive: “I can’t stop thinking about you. I’m absolutely lost without you.”

Bozzio, still feeling betrayed by Clive’s action, does not reciprocate these feelings. This is by far the most emotional and vulnerable version of Clive that we have seen on iZombie. Malcolm Goodwin killed it this episode and I think it was the best representation of how nuanced and well-rounded Clive really is. He starts off as a curmudgeon partner actively resisting D&D, and then he becomes an obsessed fanboy. We learn that he loves The Flash. And also, we see his softer side, a side where he is will to admit that he needs someone.

As much as I hate and despise Blaine for hurting and using Peyton, I can’t help myself from loving him being back! He is just so. Fucking. Amazing.

He has just finished marinating his first brain in Ravi’s magic memory solution. Blaine chose to soak the brain in the blue juice twice as long as Ravi to create a better Brain experience for his customers. Before he releases his product though, he needs to do some market research. Don E thinks that participating in a blue brain taste test is beneath him, but thankfully Tanner is there to offer his Zombie ingesting services. So Blaine gives Tanner a slice of Jacked Up WWII Nazi Killing Soldier Brain and asks him to take notes on his experience.

After hearing about the awesome and gnarly time that Tanner had on the Blue Brains, Don E wants to try the shit out for himself. So, he uses his handy melon scoop and pops that bad boy in his mouth. 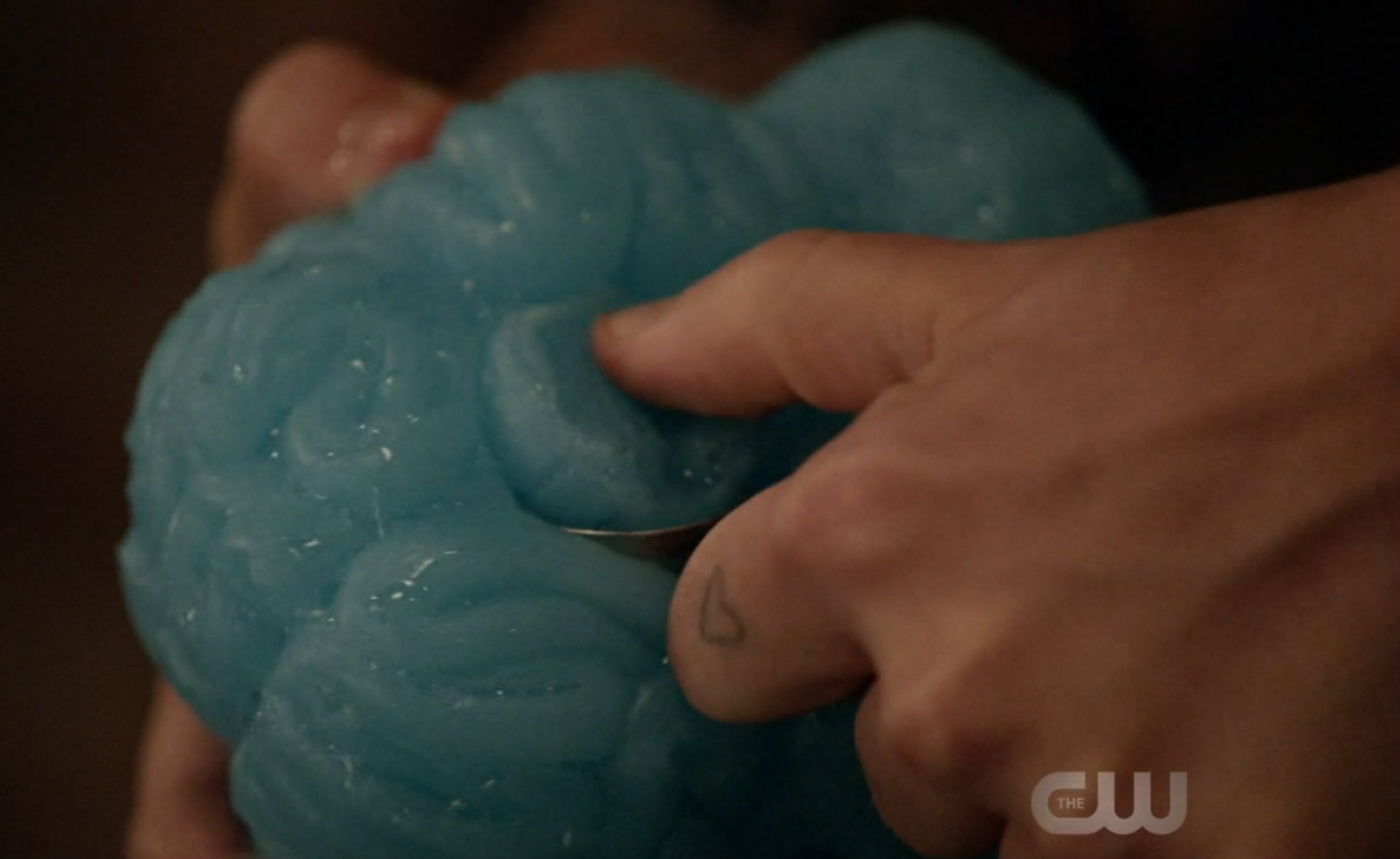 And this, ladies and gentlemen, is the exact reason that companies should test their products before selling it to the public. Apparently, a melon scoop of Blue Brain is WAY too much for Don E to handle and he thinks that he is flying a fighter jet and fighting Nazis in the Scratching Post. Eventually, Don E fully bugs out and just runs out of the club like a crazy person. 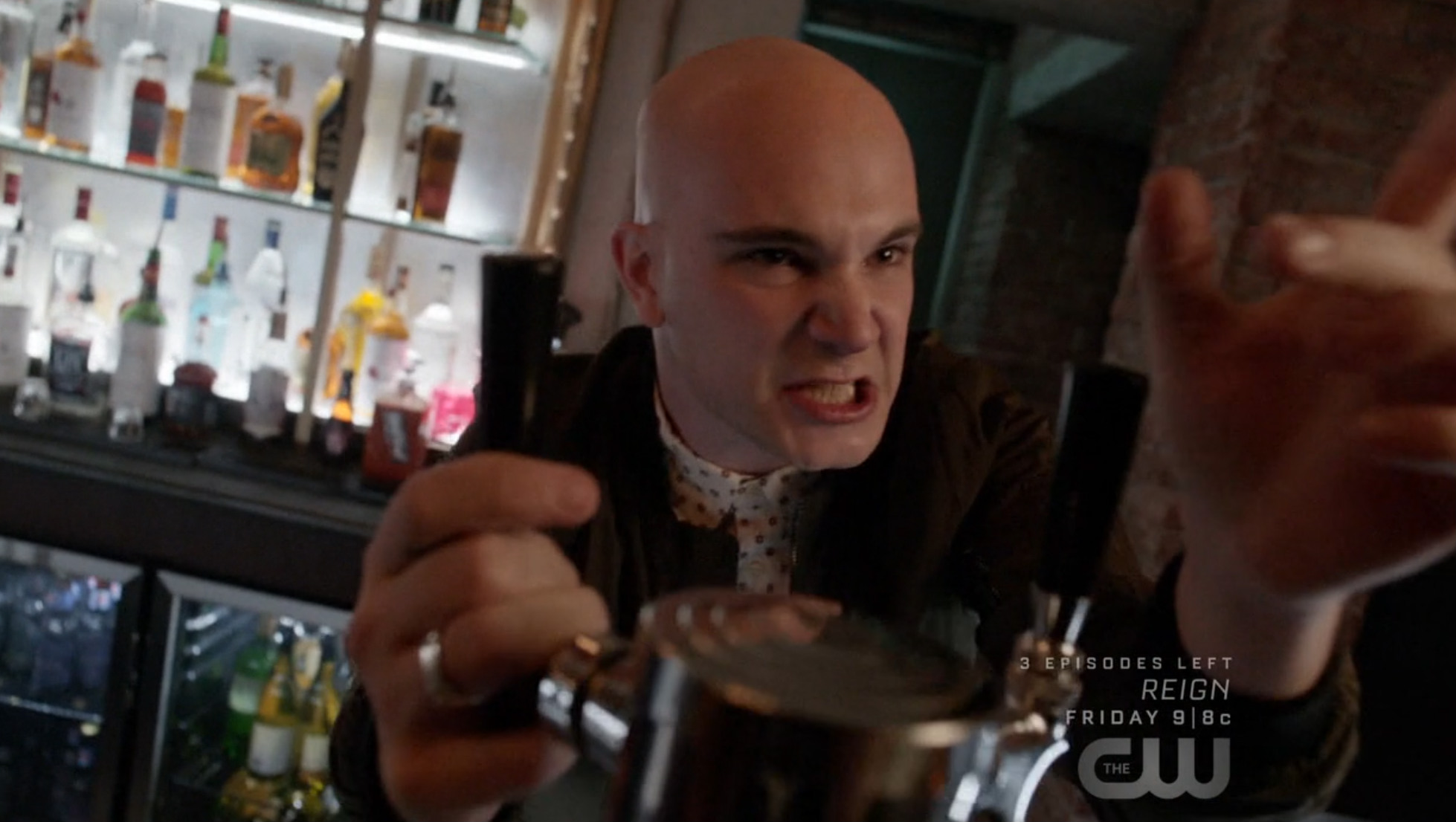 Blaine is not at the Scratching Post to witness Don E’s meltdown. Instead, he is having a nice little picnic with his father, who is still at the bottom of a well.

Even though Vivian Stoll is gone (RIP Viv), FG has to make sure they keep their focus on preparing for D-Day. This includes trying to get their Zombie Mayoral Candidate Floyd Baracus elected. The only hitch is that he is a shitty candidate and behind in the polls. To help remedy this, they throw a hoity-toity gala to garner some additional support. Two major events happened during this fundraiser.

The second and more important event was Chase and Liv meeting in person. These two were exuding so much chemistry that I physically felt it from my couch. It was electric, Boogie Woogie. The pair talk shop and discuss the impending D-Day. Chase comes off as a hard-ass, leading Liv to be a bit combative at first, but by the end of the conversation Chase smiles at her and compliments her dress. This entire interaction left me thinking to myself “Justin who?” shortly followed by “So are we gonna call them Chiv or Lase?” 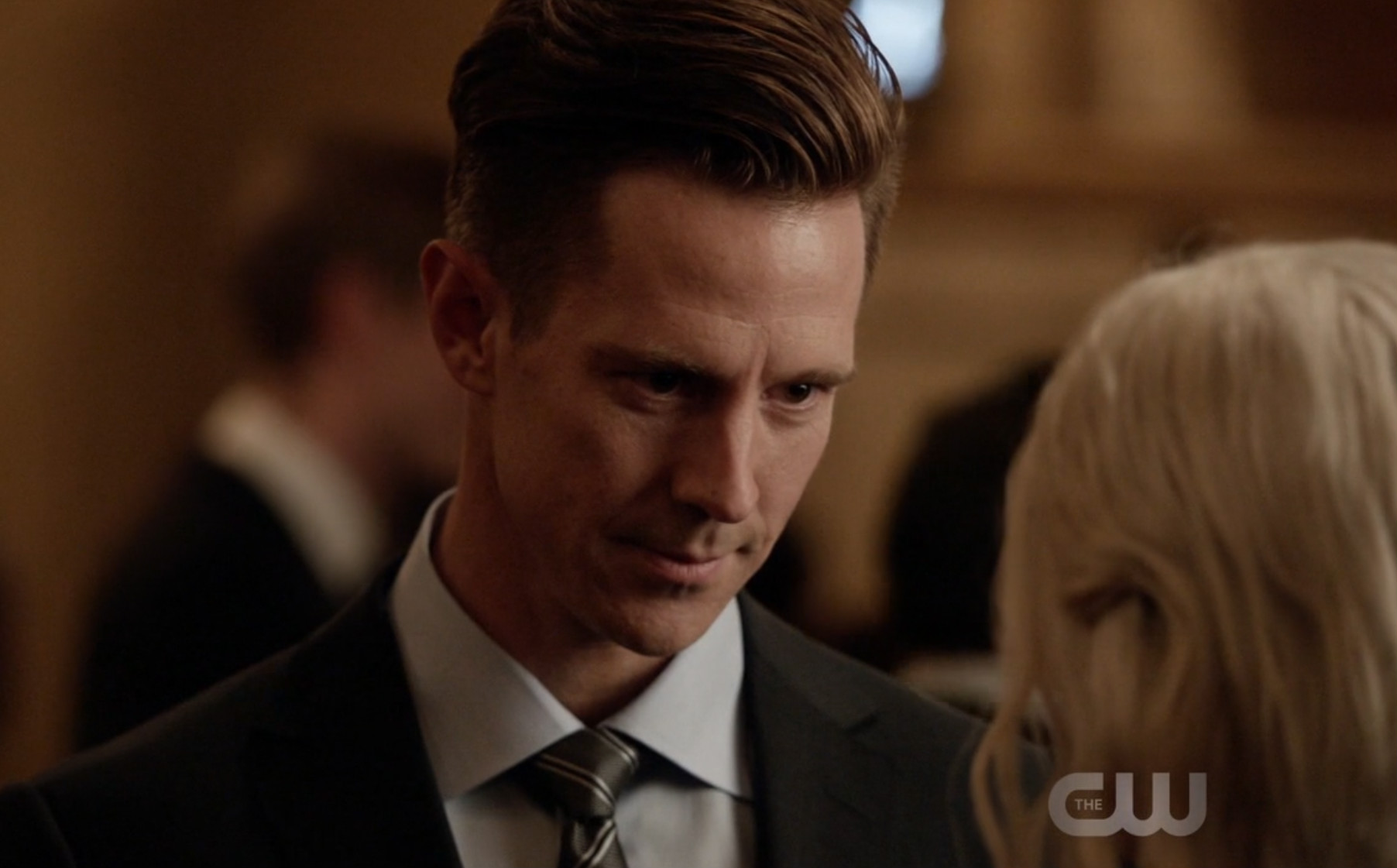 Oh yeah, also a random guy came and shot Baracus during the event, but who cares about that when we can care about Chase and Liv.

Ravi and the anti-Zombie Militia:

Ravi attends Harley John’s anti-zombie militia meeting where Harley reveals his plan to kidnap zombies and torture them on video for the whole world to see. Ravi, worried about the outcome of said attack on zombies, decides to insert himself into the conversation. He stands up and determines that his best cover is one close to the truth. He tells the group that he was fired from the CDC because of his belief in zombies and then convinces them that kidnapping a zombie could very well start the apocalypse they fear with just one accidental scratch. They should wait to until he completes his totally fake anti-Zombie Vaccine before executing the plan. I’m impressed with Ravi’s ability to think on his feet. Bravo Ravi, you are finally beginning to redeem yourself this season (kind of). Ravi’s plan did not take Don E bugging out on Blue WWII Vet brains into account though. Apparently, a crazy Zombie running around Seattle was too much of a temptation for Harley and his brother to resist, and they bring a Don E’s captured zombie-ed out ass to Ravi at the Medical Examiner office.