ReviewsTVTV Reviews/Recaps
May 26, 2017
By: Alyssa Berkowitz

This week on iZombie, the Old Blaine is officially back, a helicopter explodes, and there is a new leader at Fillmore Graves

“Eat a Knievel” is probably the most substantive and cohesive episode of the season. Several story arcs were explored and plot lines advanced in a way the felt organic. Except, of course, for the Brain of The Week, which always seems to be in a world of its own.

Crime of the Week:

Victim: Douchebag professional prankster Finn Vinicible (aka Bobby from Cousin Skeeter).
Cause of Death: Burned alive while jumping through a ring of fire after someone switches his flame resistant Hay Suit with a very much flammable Hay Suit. 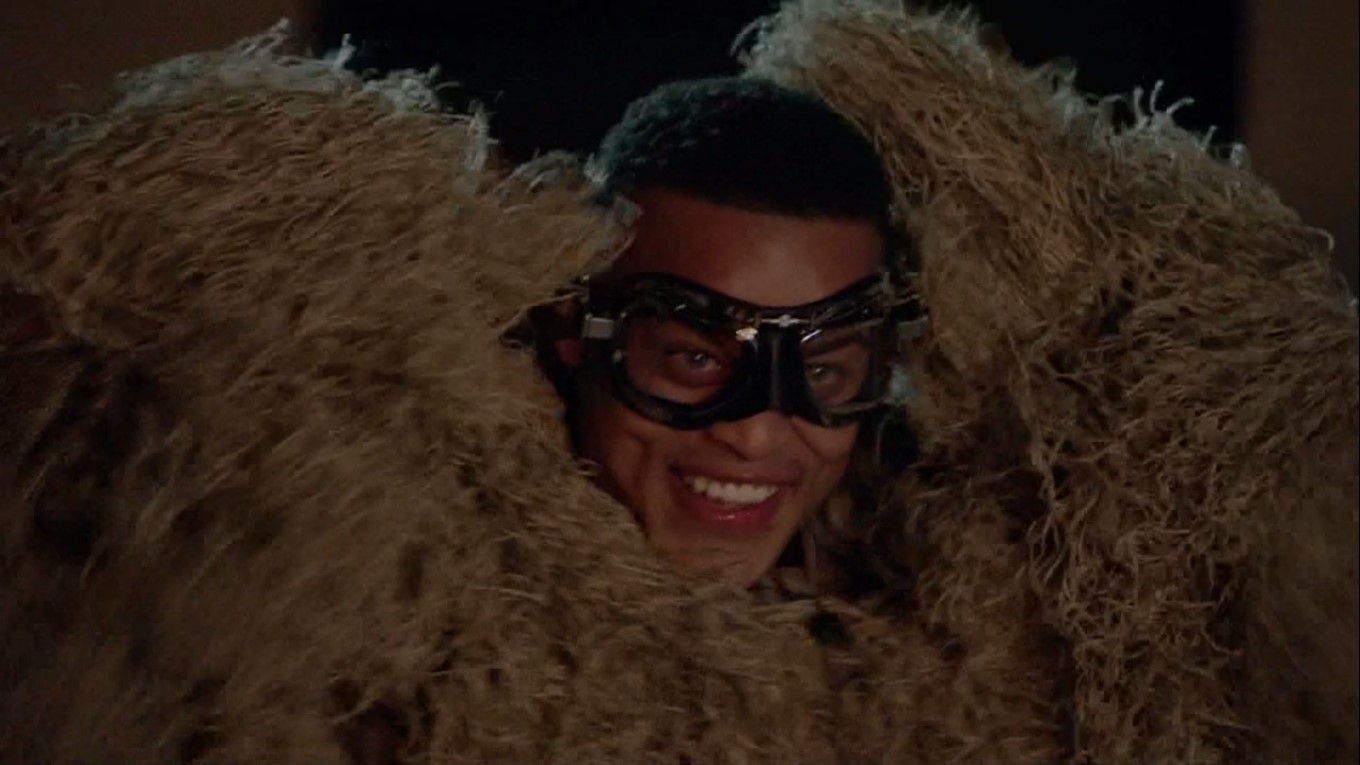 First off, the Brain Food this week was lacking inspiration. All Liv did was plop a slab of brain on a frying pan and pour spicy spices on top of it.

Since, yet again, the crime has little impact on the rest of the episode I will quickly sum it up. A while ago, Finn’s friend Rudy walked in on Finn in bed with Rudy’s girlfriend, Stasha. Finn and Stasha play it off as though it was all just a prank, and all is forgiven. Nine months later, Rudy sees the uncanny resemblance his newborn baby has to Finn, realizing that Finn did, in fact, bang his girlfriend. Hence, the murder of Finn.

Liv decides to use Finn’s adrenaline junky brain to her advantage in planning an action-packed first date with Justin. In order for this to work, Justin needs to eat some Finn brain as well. Liv has been in too many situations where her brain and her boyfriend’s brain are incompatible. Like when Lowell was on gay guy brain. (Damn you Blaine for killing Lowell!.) Liv gets Justin to steal some Super Max and then the pair head to the park where they throw rocket thingies in the air, wait for those rocket thingies to stab them, and then make out. It was pretty adorable. 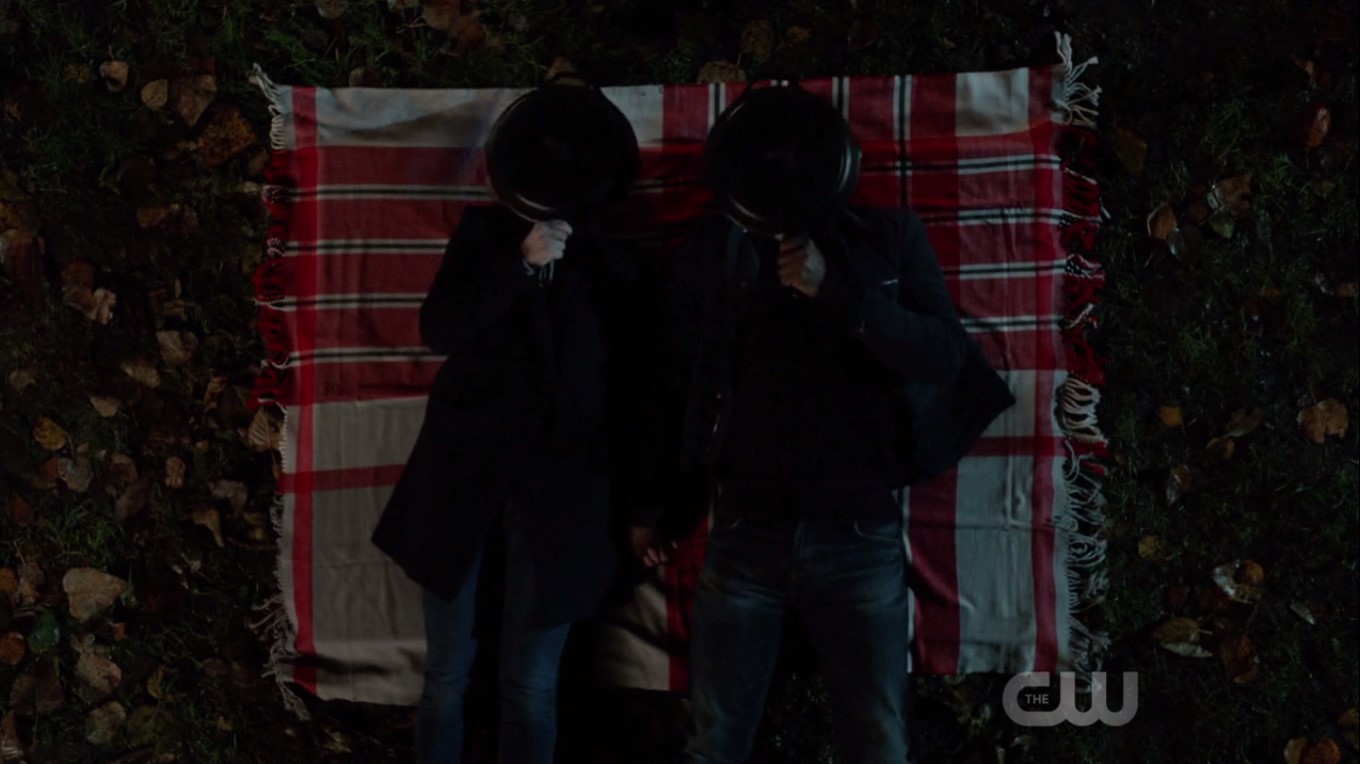 Justin, Clive, Liv, and Major are summoned to FG to discuss Harley John’s video of Justin Zombie-ing that is now circulating on the interweb. Luckily, most people think that the footage is fake. The real question that Vivian and her two minions have is how Major and Justin let themselves be exposed.

It is obvious that Vivian is suspicious of Major so it was no surprise when she asked him to hang behind for a little chat. Major does nothing to help himself when talking to Viv as he nervously answers each of Vivian’s questions. Vivian gets up to thank Major for his service by shaking his hand:

Vivian: “I hope this isn’t too personal… but is that a human pulse I’m feeling or are you just happy to see me?” 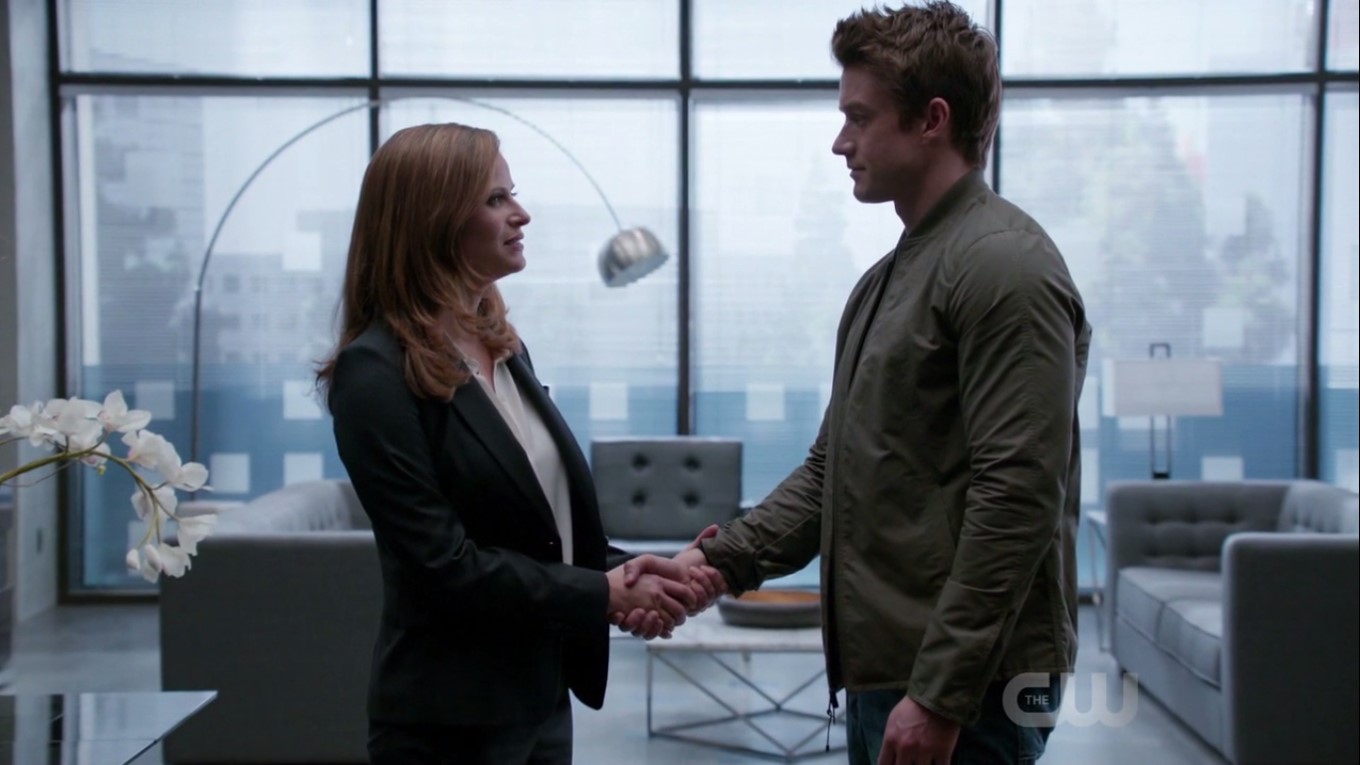 Oh man, I love Vivian so much, which makes what happens next so much worse. Viv jumps on a helicopter headed for Zombie Island and within minutes of going up, it explodes.

Vivian Stoll was just killed. WHY iZOMBIE? WHY???? This is incredibly upsetting. First of all, I loved Vivian. I kept waiting for her to get more screentime. She was funny, sarcastic and sweet. She was getting along with everyone, and I thought she could serve as a mentor to Liv. Instead, they kill her. I almost don’t even see the point of her as a character. I’m guessing that iZombie wanted to introduce Fillmore Graves as a caring and nice place and then have her brother-in-law, Chase Graves (played by Jason Dohring) come and make it a more military place. But still, I feel like they just wasted all the potential that Vivian Stoll had. So, R.I.P Viv, I miss you already. 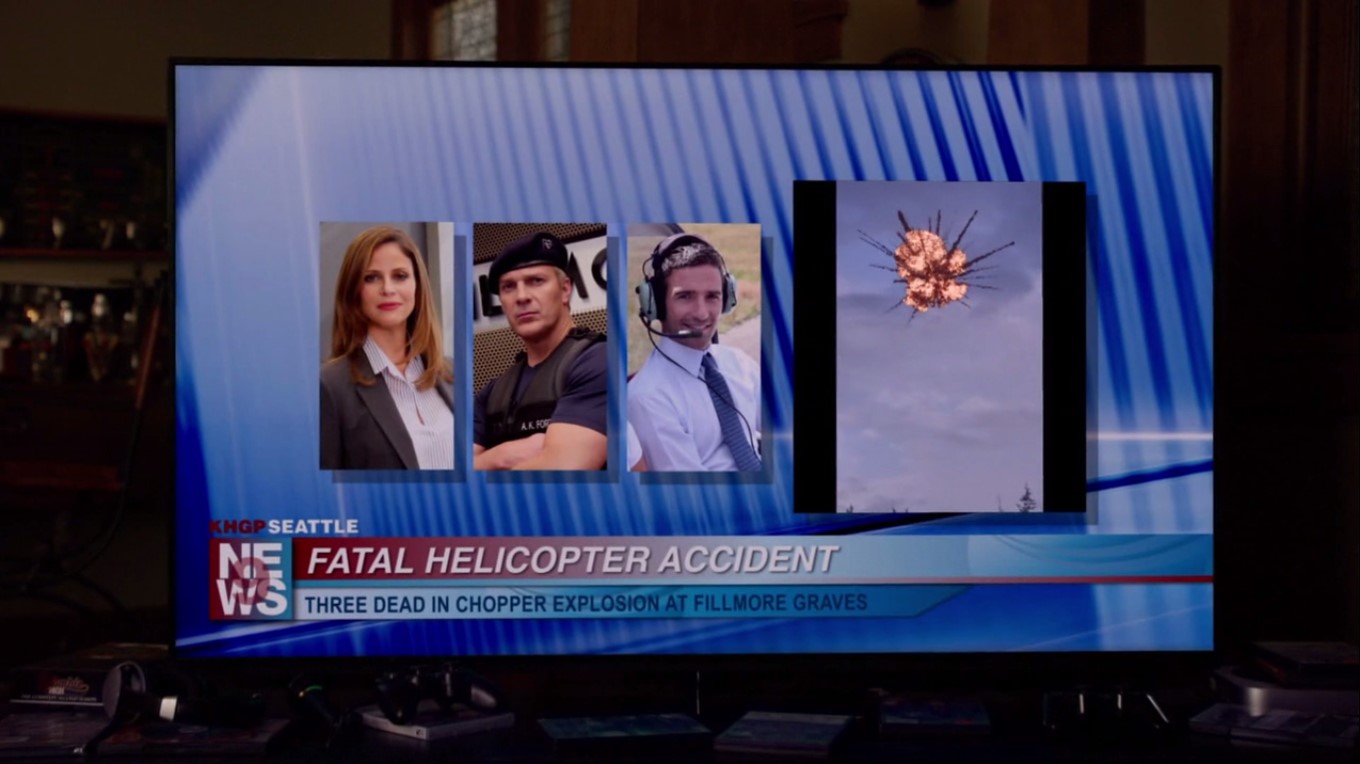 Speaking of Chase Graves, he is now in charge of FG and is very rigid and strict. When he finds out Justin stole that Super Max for his date with Liv, Chase shoots Justin in the chest. Justin doesn’t die because he is a zombie, but still, that must hurt.

Last we saw Blaine, he was had taken a bullet to the abdomen and was begging for his life. Apparently, a shot to the gut was what Blaine needed to push him out of his self-pitying funk and jolt him into Evil Businessman Mode. First things first, he needs to make sure he doesn’t die from his bullet wound and find out the headquarters of his Pops brain empire. He is able to achieve this fairly quickly by finding a local zombie to scratch him and give him the address for The Scratching Post.

The second part of his plan is to take down his father. Blaine achieves this by looking to the Greeks for inspiration. Blaine delivers himself to his father in a crate filled with cement under the guise of it being a shipment of brains. And, as soon as Papa DeBeers opens the crate, Blaine jumps out and defeats the Trojans. 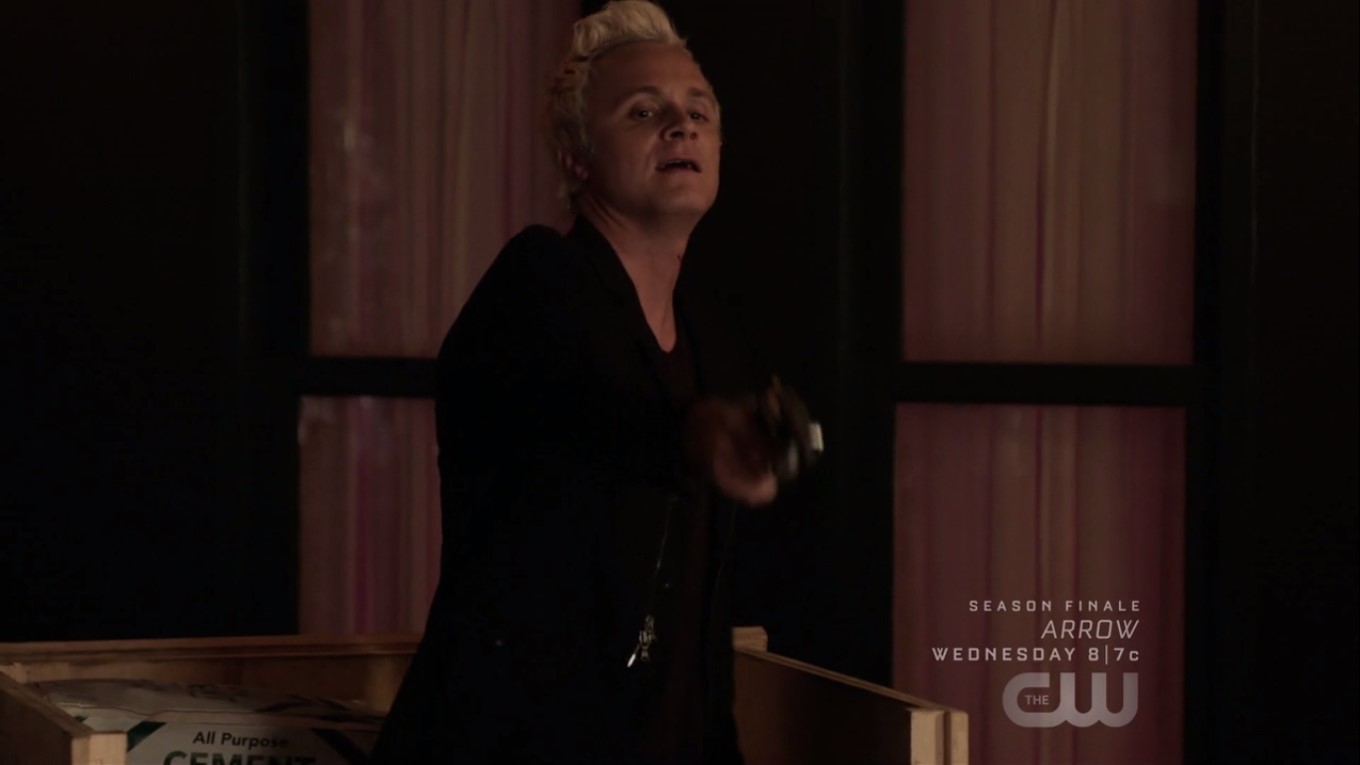 Well, kind of. Killing his father right there and then would be much too boring for Blaine. Instead, Blaine sets his father’s feet in cement and drops him down a well. Now with his father out of the way, Blaine takes over his father’s role at the Scratching Post and now he is the top dog in the Brain Business. 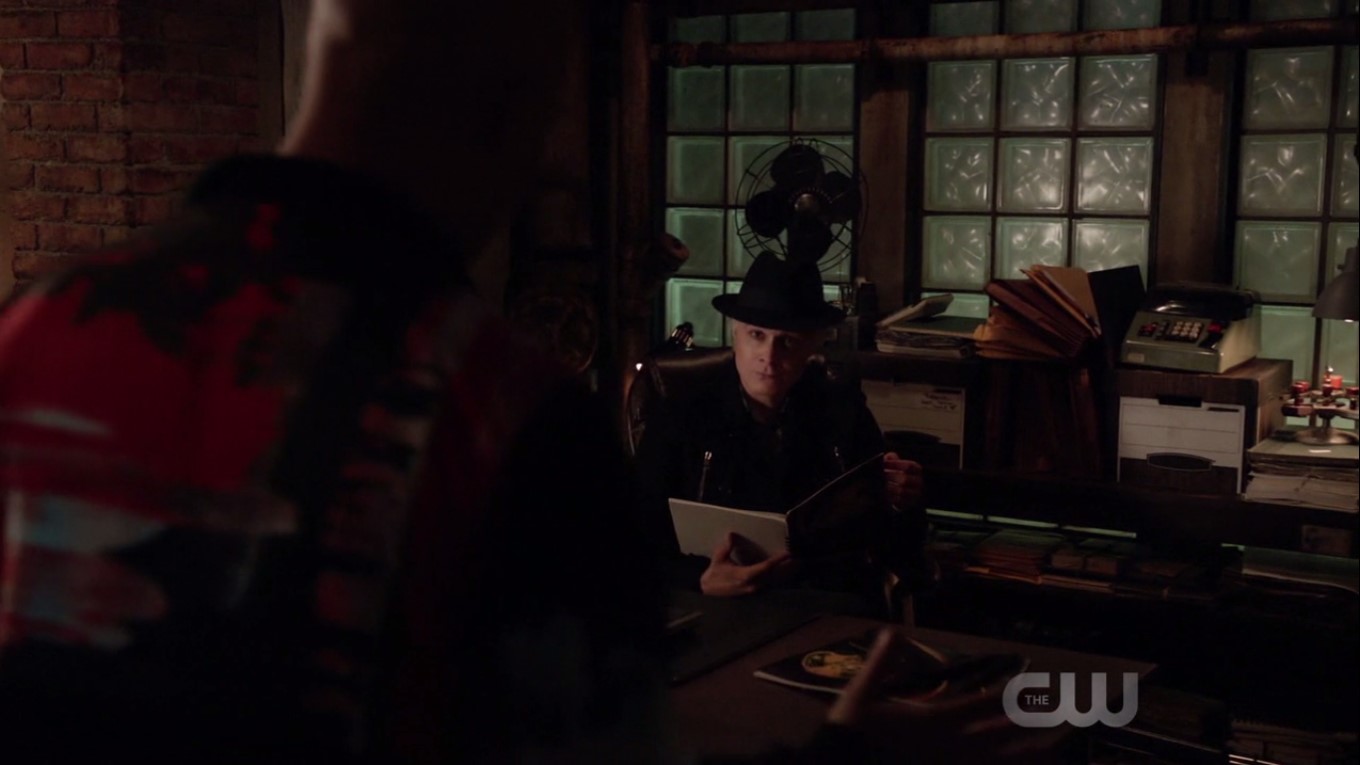 I have mixed feeling regarding the return of old Blaine. If the writers committed to Blaine indeed suffered from amnesia, having Blaine part of Team Z would have created an interesting new dynamic within the group. I have stated before that I liked the new and improve Blaine when we thought he was actually new and improved. But, that is not the direction that the show went. Instead, they had Blaine hurt and use Peyton for the second time. On the other hand, evil Blaine is so much fun. He is smart and funny and just badass and a blast to watch.