**Game of Thrones Season 4 spoilers below**

Ah, Game of Thrones, a fantasy nerd’s wet dream. Thanks to 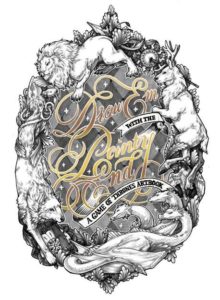 the internet, there’s no end to fanart, fanfiction, cosplay, and fan…food? I’m grateful for that because some of the fan work is good. I mean, really good. And that’s where people like Grace Fong come in. Grace is an artist and huge fan of Game of Thrones. She had the idea to compile some of that fantastic fan art scattered about the internet and put it in a book for other fans like myself to hold and cherish.

Draw ‘Em With the Pointy End is a limited-edition, 160-page, full color, 8.5″x11″, softcover, tribute art book with over 100 artists from around the world sharing their original homages to G. R. R. Martin’s series, A Song of Ice and Fire (a.k.a. Game of Thrones).

Currently, Grace is running a Kickstarter to get the book funded. It’s not cheap to print full color, but she’s excited to share this work with everyone. With 15 days remaining, Grace and co. are only $6,000 shy of their $18,500 goal. And the rewards are pretty awesome, from posters, to stickers, to fan art right in your email, and even a Game of Thrones-themed party. I’d love to see this book funded so we reached out to Grace and luckily, even with her busy schedule, I had a chance to talk to her about the project. Here’s how it went down:

Tell me about yourself, Grace.

Well, I’m Grace. During the week I work full-time in the tech industry, which I enjoy, but I also like drawing so I do that on the side. When it comes to art, I guess I just try not to half-ass  everything. I want to make things as good as I can really make them. This isn’t my first art book, I put one together while I was in college.

And now you’ve got a Kickstarter for your second book, Draw ‘Em With The Pointy End.

We ended up with a LOT of artists, over one hundred, which is really high considering most participation with art books. With so many people and the amount of color in the art, printing became a bit of a challenge, so we opted to go for Kickstarter as our main method of funding. It seemed the easiest way to share the work with everyone else. And a good way to give the artists a little bit of money for their time.

How did you choose who was going to be book? Did you put out a call for artists?

About 30% of the final group is people I’ve worked with before, either through anime conventions, previous art books, mutual friends, and so on. The other half or so–I’m sorry my cat is crawling all over me right now. She has decided that because I’m not paying attention to her she is going to MAKE me pay attention to her. She is a menace.

Anyway, I knew people who had a significant following of other artists they’ve worked with before, so we ended up getting involved with people who worked at Paramount, on Avatar: The Last Airbender. Kind of as a way to show this is the bar we’re looking to set, and then we put an open call out on Tumblr. We ended up with 2-300 portfolios to look at.

Obviously as an artist I don’t want people to be doing work for the book and then not getting paid for it. So instead of specific art, we looked at their existing portfolios. It didn’t make sense for anyone to have to create something new for this, taking up their precious time and energy. We decided to give each accepted artist a flat fee because the logistics of, “Okay, if we sell this many copies you’ll get this much” was a real hassle. Also, I wasn’t comfortable with the, “Yea you may or you may not get money” thing. So this is what each artist gets and anything above that will go to charity. Probably one of the charities George R. R. Martin backs.

Speaking of Martin, have you reached out to or heard from either him or HBO in regards to the book?

We reached out to both of them, but had a difficult time contacting HBO. We found out they’re doing a fan book compendium as well, but it’s not exclusively art. It’ll also have cosplay, food art, and all manner of other things. We did ask about rights to our art book and they said they’d let us keep them, but we haven’t been able to contact Martin himself.

What are the biggest challenges in starting a Kickstarter project?

I’ve done smaller Kickstarters before but none of them have been over $5000. The hardest thing is probably the advertising because people aren’t going to spend money on something they’ve never heard of. However, this has honestly been one of the most amazing collaboration projects I’ve worked on. The artists have all been self-motivated with trying to get the book out there. They took to Twitter, we started Facebook group, posted blogs, and to Tumblr. Some even made a QR code for flyers to hand out at conventions and what not. There’s no way we could even come close to achieving our goal without the amazing effort from all of these people and I’m grateful for that.

You know, I work on a guilt system. Basically, I told them, “There’s a flat amount of compensation. You aren’t going to make a bajillion dollars.” So in order to help people get more out of it I started a system of critique and feedback. The artists would post their work and any time they did so and took that feedback, they’d receive part of their stipend. As other people saw fellow artists working and making their projects better, they were excited and pushed themselves to match those around them.

In terms of content, is the book mostly art based on the show or do you think book readers can also enjoy it? Does anyone cover say, Robert’s Rebellion or the Dunk and Egg novellas?

I envisioned the book as being a visual representation of what that artist sees in the series. If they only watch the show or read the book or both, it’s perfectly fine. It’s whatever the artists’ interpretation of the work is. Without the restrictions on the work I feel like we brought out some awesome creativity in the artists. We also didn’t limit them on which character they could draw.

Do you have a favorite piece so far?

Oh man, there are so many I like for so many different reasons. Grace Kim’s Nymeria with the huge eyes is adorable. Kara Phillips’ Brienne Oathkeeper, that girl can render some insane images. It’s like she took the show and made it better. Naomi Franq was doing this piece on Ellaria and Oberyn and I’m super proud of her because she took the feedback so well and looking from her rough draft to her final, it was completely different and so much better. That one is still making the rounds on Tumblr with sobbing hashtags. 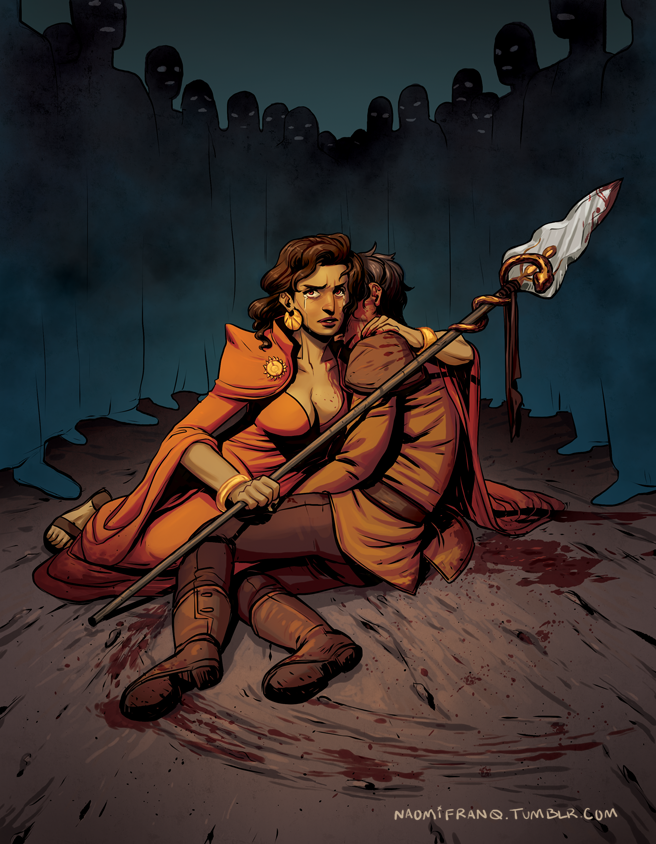 It’s especially poignant to me because my favorite Game of Thrones character is Oberyn Martell.

I was going to ask who your favorite character was, but you beat me to it. Oberyn is obviously second to Cersei though, right?

Yea, I love Oberyn. The morning after that episode aired, my friend texted me and was like, “I’m sorry for your loss.”

Did you know it was coming?

*resigned sigh* No, I didn’t. I’m a really slow book reader. I had friends spoil the Red Wedding for me, but I didn’t see this coming. I guess that’s why they tell you not to love anyone too much.

I love to hate Joffrey though.

Oh, everyone does. I think he was made for that reason.

I never really liked children that much and I watched the show and was like, THIS IS WHY.

Well, on that happy note, do you have any final thoughts?

I know there’s a lot of controversy over why people draw fan art and I think a lot of people are forgetting part of being a fan of something is sharing in that common interest with someone else and then getting to know that person through that shared interest. Obviously I’ve been a part of a lot of fan circles in my life, going to back to loving Sailor Moon in the third grade and wanting to be a sailor scout with all my friends. I think what you get out of being a fan of something is a sense of community, and I wanted that with this book. The great thing about fan art is it’s not just relegated to the artist and the artist community. It’s something you can share with other people who aren’t artists and they, in turn, can interpret the art how they see it.

Fan art isn’t about trying to hop on a popular bandwagon to get attention. It’s about offering up this art as a tribute to another artists’ work as if to say, “This is what I feel, this is what I love.”