Dancing With the Stars Review: Latin Night Filled with Cleavage and “Testosteron-ey”

Week 3 of Dancing With the Stars, kids! And you know what THAT means. (Okay, you probably don’t have a clue what that means, but just play along.) LATIN NIGHT!!! And with 11 couples left, the competition is getting fiercer than Bruno Tonioli’s glittery Tuesday night sex-romp parties. (What???) Let’s not miss one more second of the action. Oops. Too late. Cranky Len has already taken his first nap. 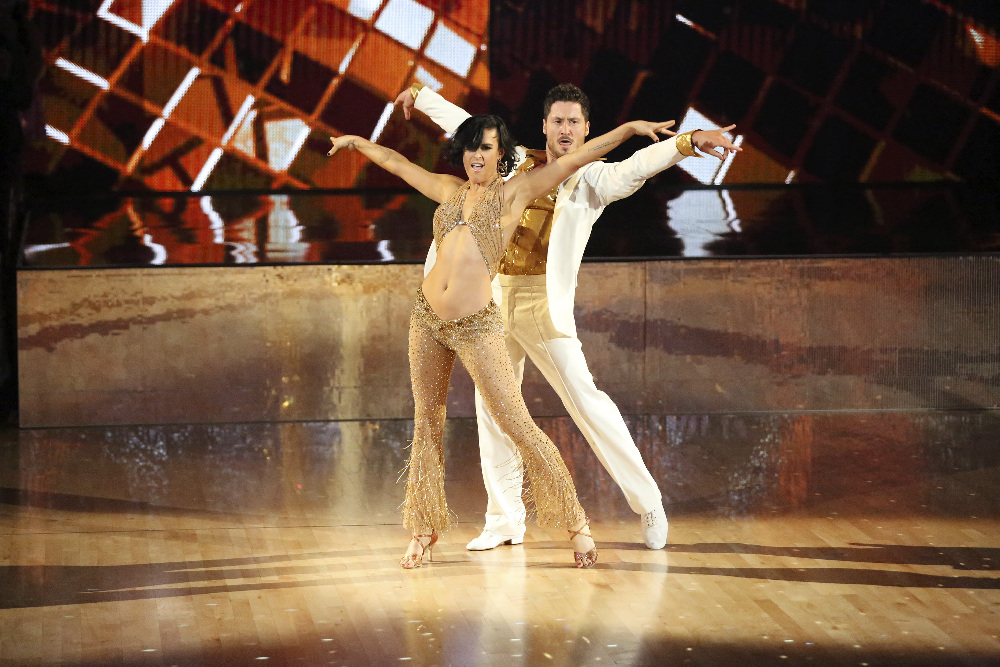 Rumer / Val : They danced a Disco Salsa, and yes, that’s a thing. The song was “Turn the Beat Around”, and they were all decked out in their best Saturday Night Fever get-ups, with Val’s white Travolta-type suit, and Rumer’s sparkly, gold tight-pants. Since this was technically the first week the couples were allowed to do lifts, lots of pairs took advantage, including these two, with a complicated set of cool lifts. Tom Bergeron commented: “That was so good, it made me crave polyester!” Bruno called Rumer a “playful kitten”, followed by some other nonsense nobody could understand as human-speak. Val was sweating profusely as Horny Carrie Ann and her pushed-together boobage said “Hot! That body!” Calm down, woman. Scores were 8/9/8/8, and Len seemed extra cranky this week. He must have missed his nightly reruns of “Wheel of Fortune.” 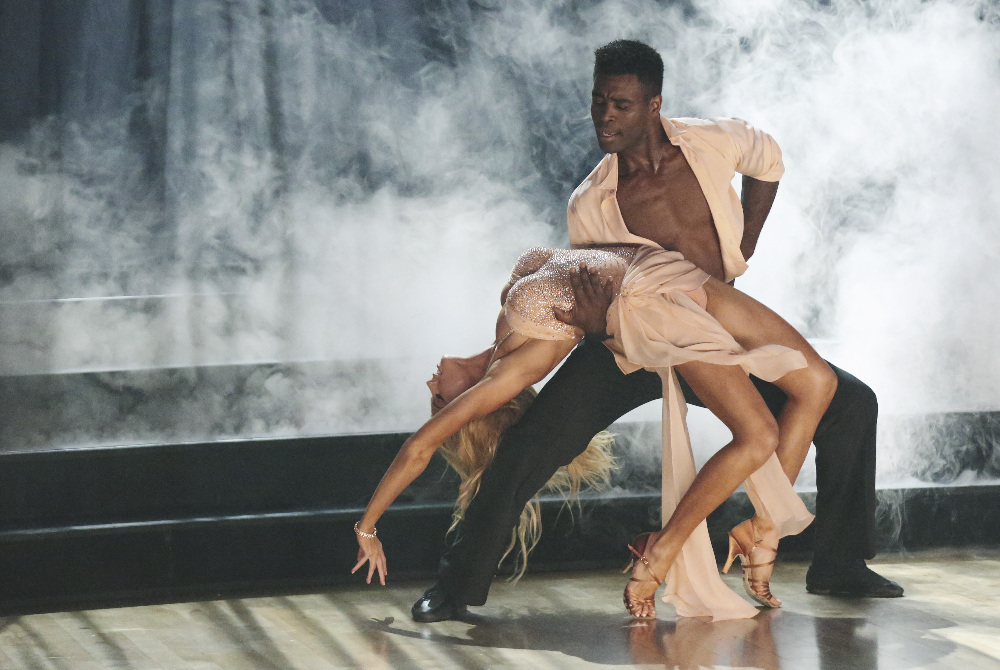 Charlotte / Keo:  Boobs McGee and her sexy partner did the Rumba, but during rehearsals, Miss Boobs-a-Lot couldn’t stay off her cell phone. Texxting, texting, texting. “I’m a model and actress, these emails are important,” she said about constantly holding her phone during rehearsals. Keo was clearly upset with her and told her to please respect the process and put the phone away at least while he’s talking to her. The dance was nice but had mis-steps in timing. Bruno “I have no filter” Tonioli said, “Well you’re never going to win the Nobel Prize for quantum physics, but you are easy on the eye.” Bergeron retorted by telling Bruno “neither are you” winning that Nobel Prize. Horny Carrie Ann told her she has an incredible body, and then Len said weirdly: “You get out of this show what you put into it, and … well … I don’t want to talk about it anymore.” Alrighty then. Scores were pretty harsh at 6/5/5/6. 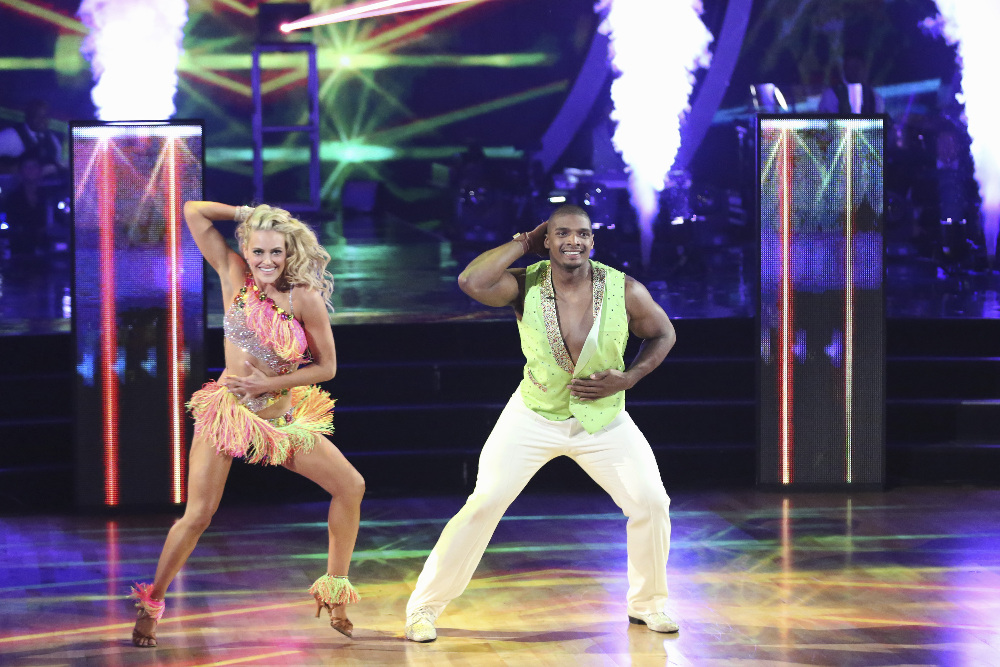 Michael / Peta:  They had the Salsa, and during rehearsals, Michael was afraid of “breaking” Peta’s just over 100-pound frame while lifting her, because he is so used to lifting MUCH heavier. He had to learn to be less aggressive when lifting her body. During their dance, his green vest made him look like a giant mint-green Tic-tac. Bruno said the timing was off, and that “you can’t force hip action,” and Len called the dance “choppy – like my bladder.” Just imagine that he said that last part. It’s funny. Scores were 6/6/6/6. 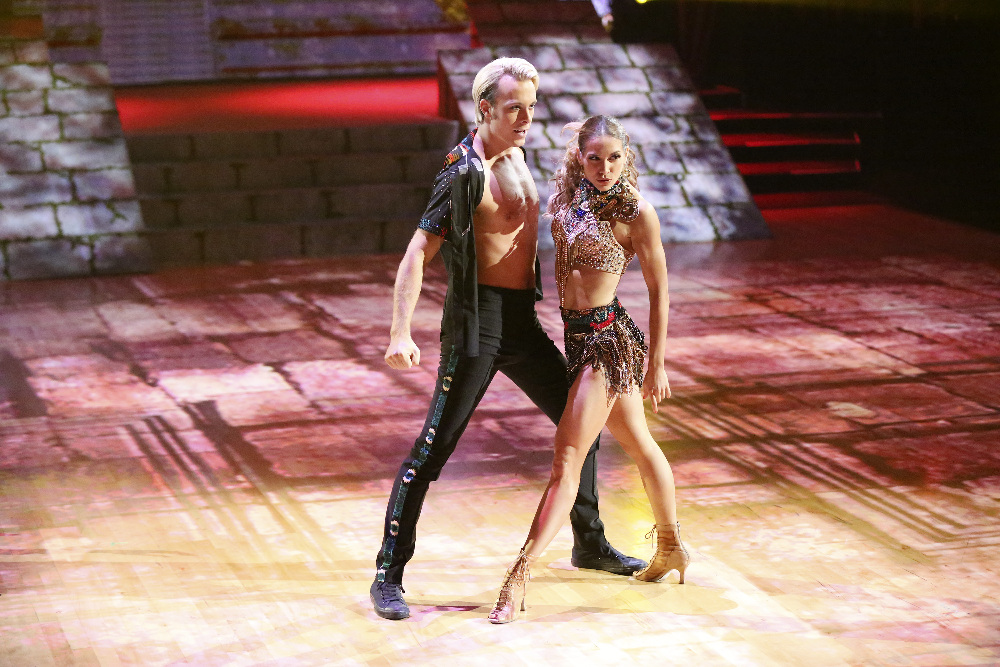 Riker / Allison:  Well, their Salsa blew Horny Carrie Anne’s mind away, and she practically jumped out of her seat with excitement for this dude, calling him “testerone-y” and giggling like a school-girl. The best was when Tom Bergeron pointed out her boobage by saying: “That’s the most cleavage I’ve ever seen from you in all the years we’ve been working together.” She took her hands and pushed her boobs more together while gushing “Oh! Thank you!” Len said, “you’ve got flair!” Flair? Who says flair?” Julianne said, “Now THAT was a salsa! ” Bruno stood up, freaked out, and rambled on and on about fast, energetic, and something about being “full-throttle.” He then kept talking and refused to stop, at which point Bergeron hilariously cut him off with, “Bruno, it’s over. We’re going to commercial now. Good Lord.” Scores were 9/7/9/9. 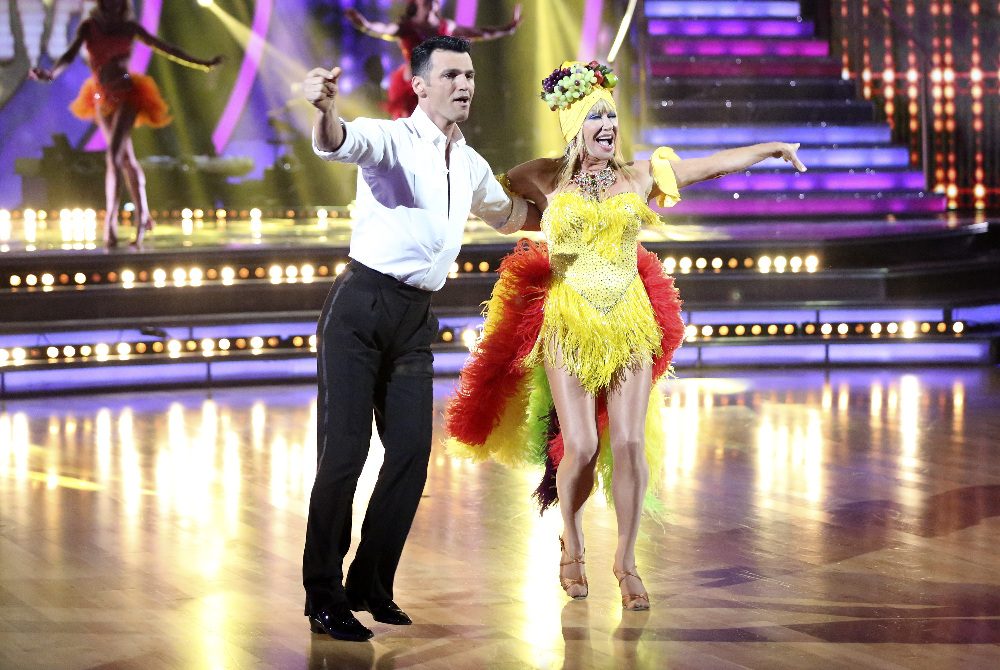 Suzanne / Tony:  She wore a giant tall fruit hat. Their dance was the Samba, and they danced to the “Copa Cabana.” Len called it “juicy, fruity, and full of fun – unlike my dry and wrinkled-up nut-sac!” Carrie Ann wanted to see “more depth” (Oh, I’ll bet you did, Carrie Anne!), and Tony didn’t like that too much, feeling as if they had put every ounce of themselves into the dance already. Scores were 6/6/6/7, and Len fell head-first into his Quaker Oatmeal bowl. 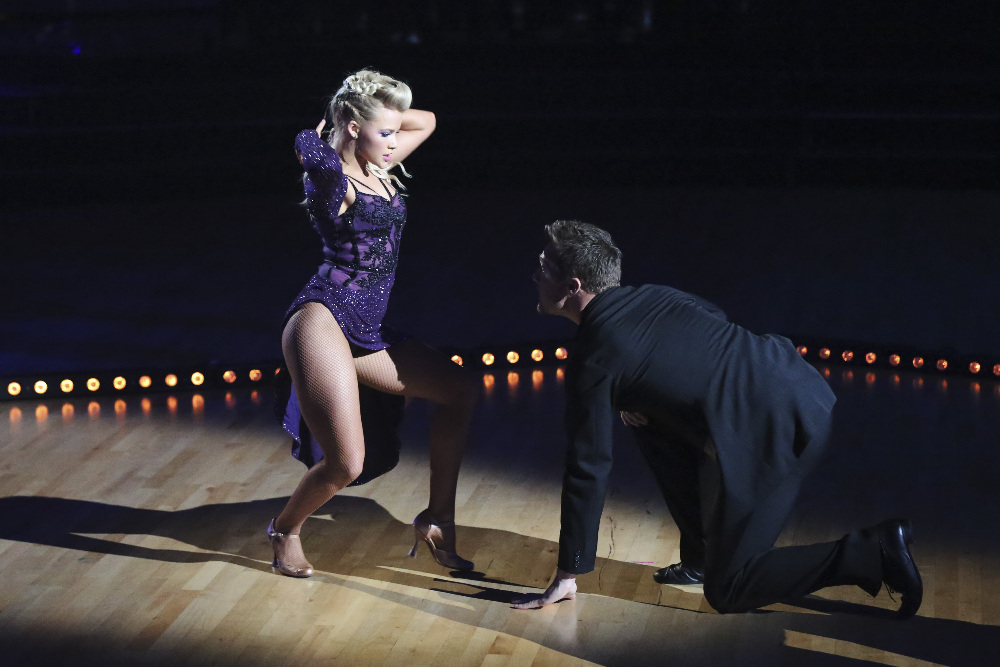 Farmer Zzzzzzzzzz / Witney:  Chris was bummed about not doing well last week, and so he was over-dramatic about that backstage and in rehearsals. “I’ve just never screwed up something so bad in my entire life. I just wanted to jump off a cliff!” Wow, really? That’s a bit drastic, don’t ya think? And you’ve REALLY never ever done anything else, in your whole LIFE, that was worse than making a few mistakes on a dance routine? Hmmmm …. In any case, they did the Argentine Tango, and Farmer Boy did much better this time around. Julianne called him “the comeback kid”, and Len called it his “best dance yet.” Scores were even at 7/7/7/7, and Chris’s fiance, the other Whitney, sat at home watching while sobbing into a generic brand tissue. 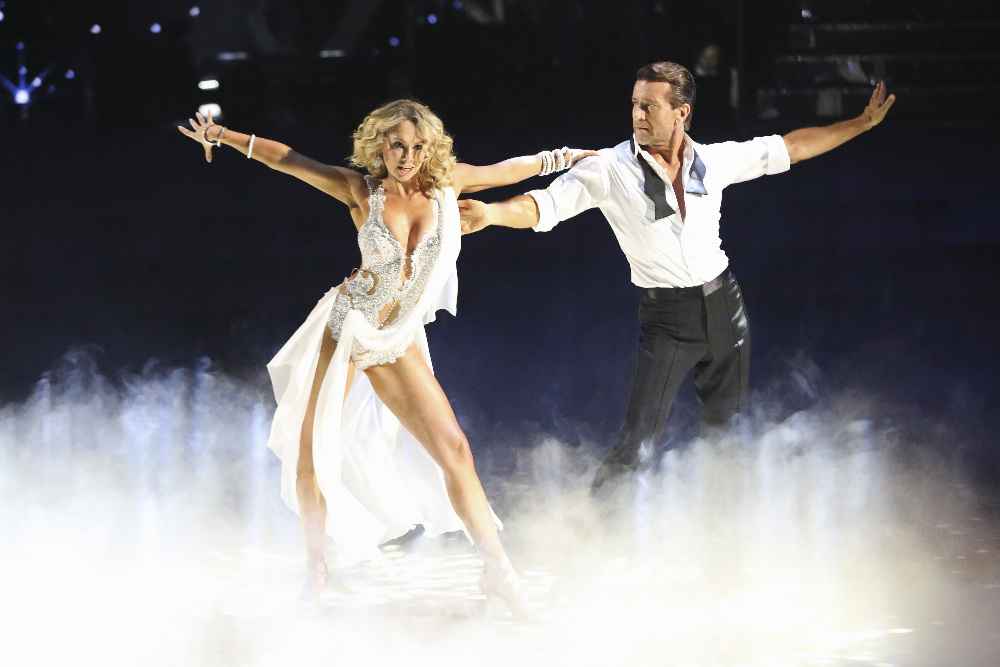 Robert / Kym:  They did a Rumba that was quite pretty and very dream-like. While rehearsing, Guy Smiley got a bit solemn and began to cry because he thought the dance was so beautiful. Bruno called it “beautifully committed, like my mental state.” Carrie Ann made the weirdest comment ever about how she is “praying to the porcelain God.” Isn’t that the toilet? Why is she praying to the toilet? Doesn’t that mean she is vomiting? I was baffled by that comment. Julianne loved the rawness and vulnerability of the routine. Scores were 7/7/8/7. 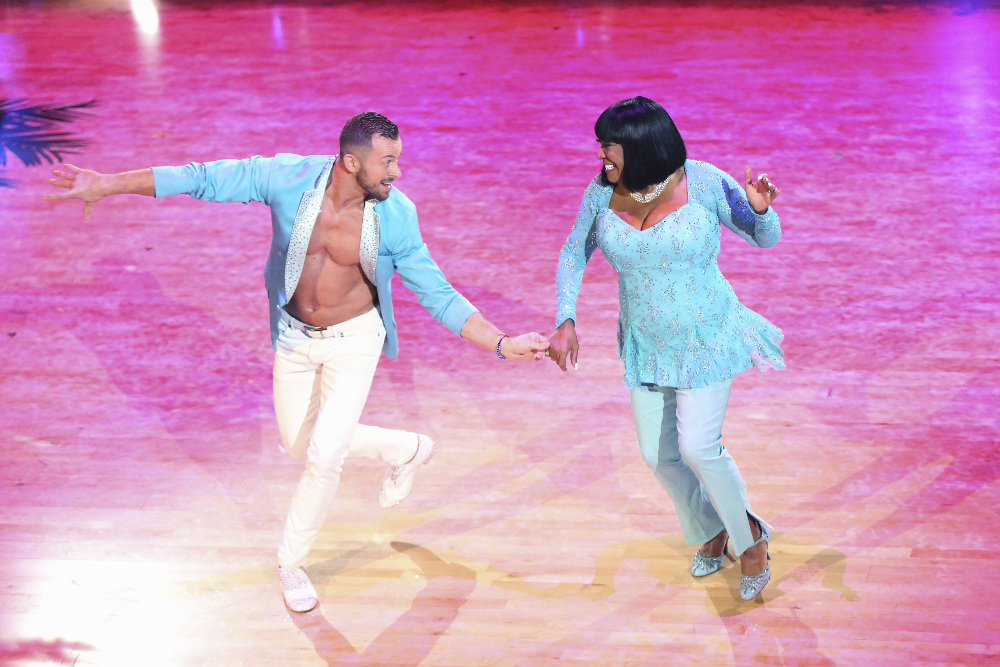 Patti / Artan:  They did the Cha-cha, and once again, Patti was cool and hip. She came out on a luggage cart, and she also had boob cleavage that was out of this world. What is with the cleavage this week? Len called it charming and fun, while Bruno said something about “5 star uptown funk!” and then spanked himself 2 times.  It was rather disturbing. Scores seemed a bit low and harsh at 6/5/5/6. 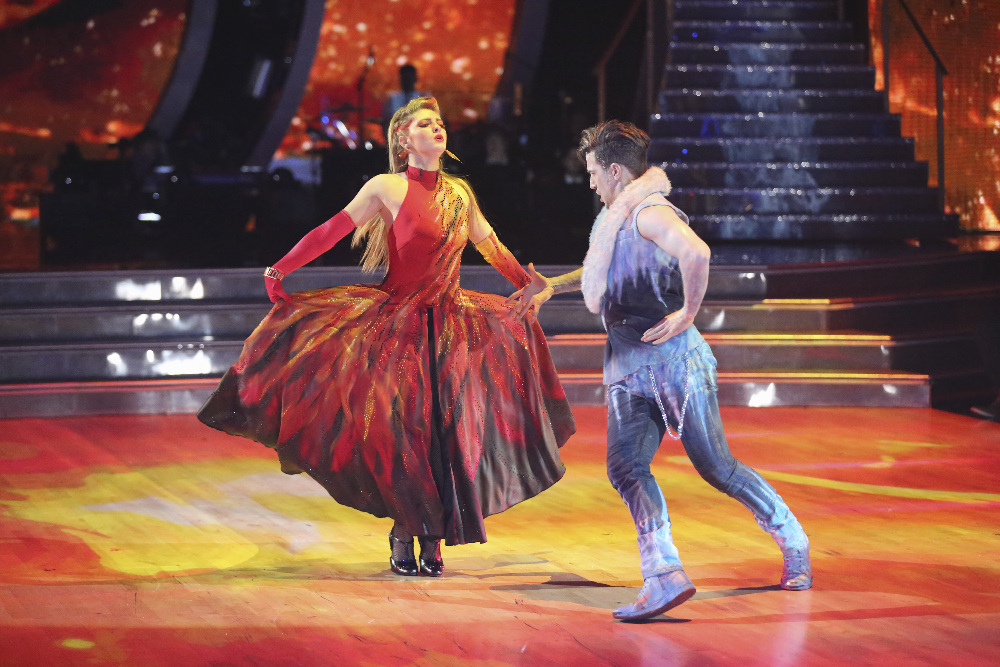 Willow / Mark:  Their dance was the Paso Doble, which Willow performed with a rib-cage injury. Her fiery red dress and the intense music made this dance one of my favorites. Len said, “it was fire and ice, gonna be hard to beat!” Scores were 8/8/8/8. 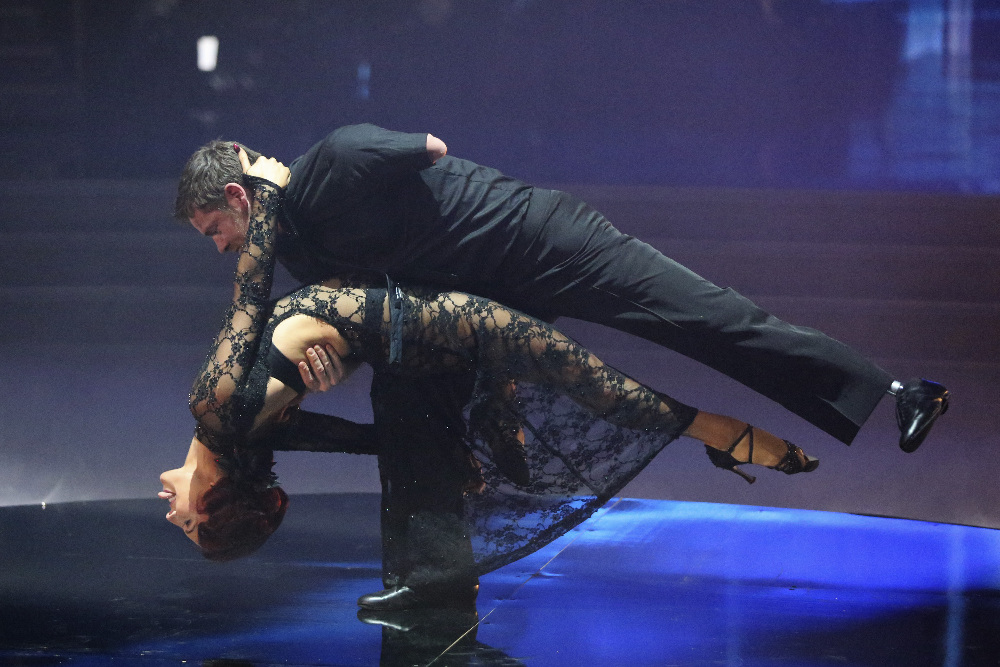 Noah / Sharna:  During rehearsals, Sharna wanted Noah to try out using a prosthetic arm for the first time, so that he would finally have a full-frame when they dance. He began stressing out over it, because it kept falling off his shoulder, and it wasn’t comfortable. He felt pushed into it, and told cameras, “I hate the f**king arm, and I don’t wanna wear it.” In the end, Sharna respected his decision, and he didn’t wear it. Instead, she once again came up with some creative and brilliant choreography to work around his missing arm and leg. The lift in this dance is most impressive, because he is using the strength of one arm to lift her over his head and into the air. Unbelievable. Julianne says, “Your best dance yet,” while Bruno called the lifts “out of this world.” Scores were 7/7/8/8. Should have been all 8’s. 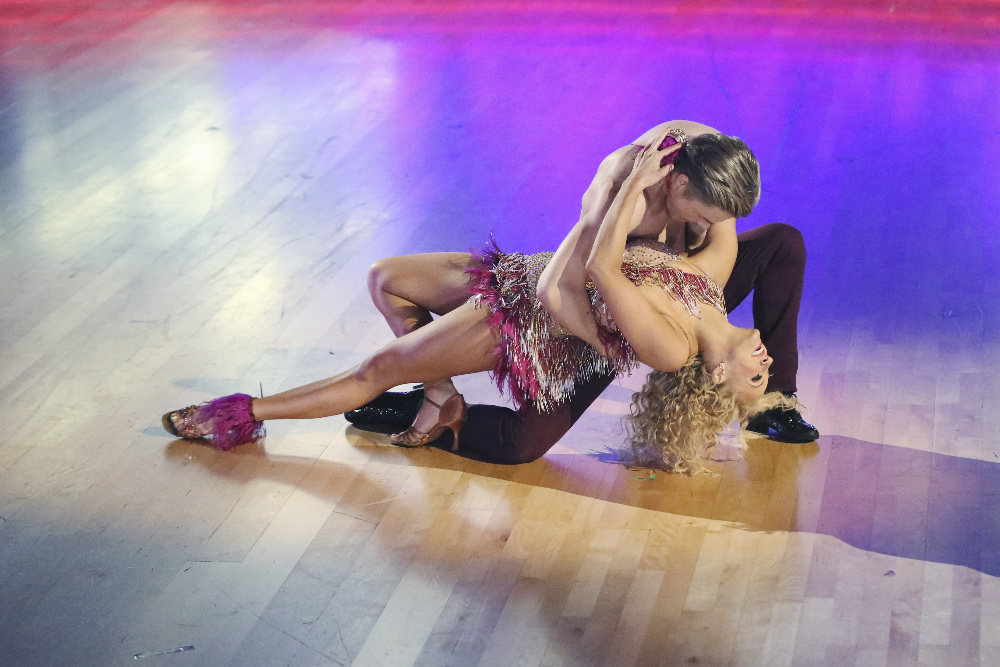 Nastia / Derek:  They have very little time together each week, because of Derek’s 10-show-per week schedule at Radio City, in the Rockette Spring Spectacular. Somehow though, they keep pulling it off, coming up with amazing dance routines and making it look easy. This week was the Samba, and it was no exception to their dance history. Bruno stood up, flipped out, and yelled, “Exhilarating!” Scores were high at 9/8/9/8.

RESULTS:  Going home this week from Dancing With the Stars were Boobs McGee (Charlotte) and Keo. Sad to see him go, because he is adorable and hot and cute and all that stuff. I hope that Madam Boobs-a-Lot finds her happiness in life, and in a good supportive bra.