‘Hyrule Warriors Legends’ Review: Is It Worth The Double Dip?

Hyrule Warriors launched on the Wii U back in August of 2014. Now the fine folks over at Koei Techmo have decided to take that game and smash it down onto the small Nintendo handheld. The real question: is it worth the double dip on the Nintendo 3DS if you already own it for Wii U?

When I first laid eyes on Hyrule Warriors on the Wii U, I must admit that I was a little bit skeptical. Why would they take the framework of Dynasty Warriors and slap The Legend of Zelda skin on it? It seemed like cheap gimmick to fill the void of games on the system. I was never a huge fan of the Dynasty Warriors series, but I have always loved The Legend of Zelda, so I decided to give it a try. That is when I realized how naïve I really was. Before we get into the 3DS specifics, let’s remember what it was like on the Wii U.

The game focuses around our hero Link as he single-handedly takes on any entire army of thousands to save the kingdom of Hyrule. The game is all about time and resource management as you try to take on many objectives at once. You may be defeating a boss enemy, but at the same time you are told that you must go protect a certain Keep before it falls, having you run all the way to the other side of the map. While things get pretty hectic, it actually keeps you on your toes and makes the game move at a brisk pace (although some individual missions can take over 30 minutes to complete).

Part of the fun of Hyrule Warriors is that it ties together nearly every universe of every major home console Zelda, including mainstays such as Link, Zelda, and Impa, as well as side characters like Agitha the bug collector from The Legend of Zelda: Twilight Princess, and Darunia the Goron from The Legend of Zelda: Ocarina of Time. The game also features brand new characters created specifically for this game, like the sorceresses Lana and Cia, and the much discussed newcomer, Linkle.

The story has an interesting way of bringing these characters together. The evil Sorceress Cia has decided that she wants to bring back the Demon King Gannon, but in order to do so she much rip a hole in time. This causes the Zelda Universes to converge, bringing heroes from all over the timeline into one place, all fighting for the same goal. Stop Cia, defeat Gannon, and save the world! Simple, right?

The story in the 3DS version is mostly unchanged. The biggest difference is that they have added the Linkle storyline that goes parallel with the original game content. While Linkle’s story isn’t that great, her combat skills are amazing. She is far from the sword brandishing hero with a similar name. Linkle actual wields dual crossbows, and it is fantastic. She even has a special move, bringing the camera behind her shoulder, giving you an upclose perspective as you lay waste to your enemies.

A special prolog has also been added that takes place in the Wind Waker world. It comes with the assortment of The Legend of Zelda: The Wind Waker characters that have been added to this edition. The characters include: Toon Link, Tetra, King Daphnes, and the Skull Kid (of The Legend of Zelda: Majora’s Mask fame). This contrasts the Linkle Storyline, as the Linkle story only backtracks previous areas that you have already completed. While the new characters can be added to the Wii U version through DLC, this special level and story content can only be found on Hyrule Warriors Legends on the Nintendo 3DS.

Now for the big question: how does it run on the Nintendo 3DS? I must say, I am just as surprised as you are to announce that it runs awesome on the New Nintendo 3DS. If you have an old model 3DS, do not bother with this game, as it runs very poorly. Nintendo should have made this game a New Nintendo 3DS exclusive, like Xenoblade Chronicles 3D. For those with the New model, it runs fantastic. The frame rate is solid, and has no right to run as smoothly as it does on this handheld. 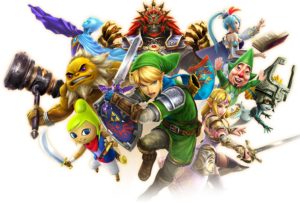 As for graphics, it looks fine. It follows a similar look as Super Smash Bros for Nintendo 3Ds, with the thick black outline around your character. The game does feature some pop-in with enemies and environments, but the amount of enemies and chaos on the screen at one time is still very impressive. If you are use to the Wii U version, you will notice that special moves and explosions no longer have the same amount of flair, but I feel that it is forgivable when running on this system. One final note, if you do enjoy playing your games in 3D, you will notice a slight frame rate drop.

While many may feel that this game is more inclined for home console play, let me just say that Koei Techmo shatters those expectation. They have found a great way to make the transition to handheld. As I had mentioned earlier, some of the more intense missions can go well beyond 30 minutes, however Hyrule Warriors Legends allows for a special save feature. So if you are riding the bus to work in the morning, you can save your game and boot it up later in the day, picking up right where you left off in the battle, never missing a beat. The bite sized Adventure Mode also better suites the handheld versions. The game also allows character-switching through the use of the touch screen, and adds the items of the ocarina to allow fast travel across the map. Honestly, if Hyrule Warriors became a handheld exclusive in the future, I think I would be fine with that.

So, is it worth the double dip? I absolutely think so. First, if you have a New Nintendo 3DS and do not own Hyrule Warriors on the Wii U, I feel that this is a must buy. If you already own the game on Wii U, then the decision is really up to you. If you loved the original, and want more characters and content, then this is also a must buy. If you only slightly enjoyed the original, but want to check out the new character, you can purchase them as DLC later on down the road (although you can add them to the Wii U version now if you purchase it on the Nintendo 3DS).

@theworkprint
Follow
Previous article‘Dancing With the Stars’ Review: Nothing Says Latin Night like Donald Trump
Next article‘The Magicians’: Fillory, Josh, and the Vanishing Class of 2016