‘The Magicians’: Fillory, Josh, and the Vanishing Class of 2016

Because it’s The Magicians, we can always count on Murphy’s Law to put a hitch into any well laid plan. Except the squad only had fragments of plan that at the very best had a small chance of working perfectly. It didn’t of course.

Penny tells them to put aside their crap and focus on the fact that they need to get to the Neitherlands and find the fountain to Fillory because The Beast is coming. Everyone (except the traveler) bottles their emotions again to be to journey to world in between the worlds via the button since Penny isn’t able to bring people with him yet. However, as soon as they get there, trouble starts as Quentin is pushed back into the Earth fountain after Eve and her goons arrive. 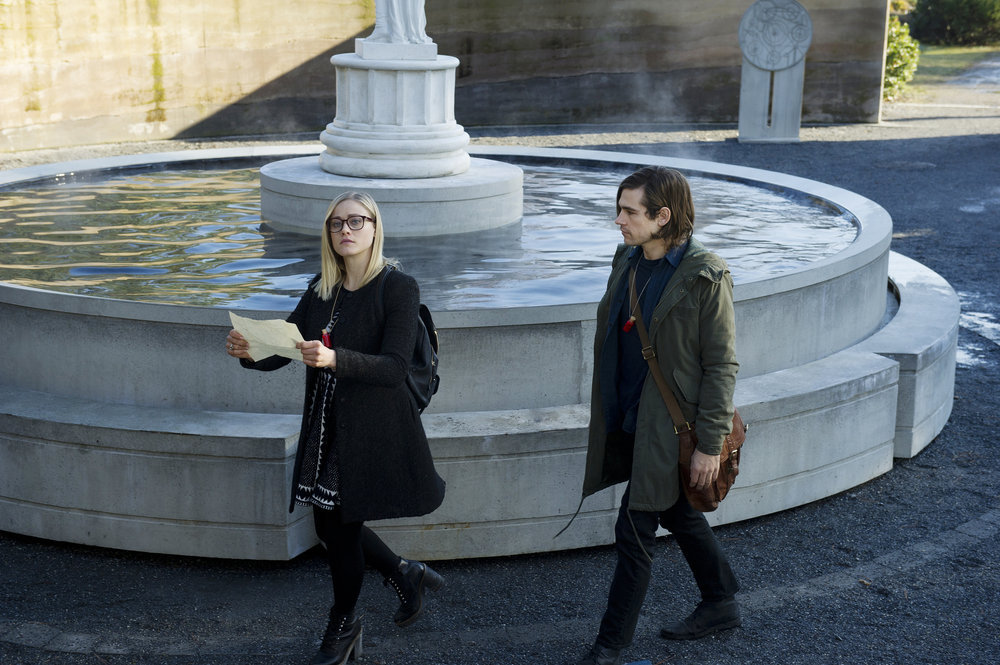 Q is back at Brakebills while the rest of the team find their way to the library. The familiar Librarian (Mageina Tova) greets them and says that they are late. Interestingly enough she calls Margo (Summer Bishil), Janet (she is Janet in the books!) and when Margo protests that her her name is Margo, the other woman says yea this time. We see what you did there writers! Wink wink. Penny spends his time trying to find books that will help him master traveling, when the librarian comes by and chats. She tells him that if he survives long enough, he will be able to master the skills though she has such a sad look on her face its like she already read his book and knows what’s going to happen. But sorry no spoilers.

Eliot (Hale Appleman) in the meantime has found Mike’s book and is still super upset about everything. In a fit of anger he ends up burning the book, which gets them permanently banned from all the libraries and cast back topside. Uh oh. Just as they are about to be cornered by mercenaries, their savior arrives in the form of Josh Hoberman. Josh was one of the Physical Kids in the book series and had been a part of the group with Eliot, Janet (Margo), Alice and Quentin. It’s so nice that he’s finally made an appearance.

On the show it turns out that he was a part of the senior class of 2016 that mysteriously vanished two years ago and no one knew what had happened to them. Josh explains that they went to Fillory for spring break. Victoria (the person trapped by The Beast in his dungeon), was a traveler like Penny and had found the magical world herself. She invited Josh and their other classmates for what was supposedly a fun and crazy trip. However, The Beast found them and killed almost everyone. Victoria managed to transport Josh to the Neitherlands and went back for the others but got captured. In his view, he’s only been there for a few weeks but back on Earth it’s been two years since most of his class disappeared without a trace. Penny then says that they are there to help rescue  Victoria but that they don’t know where the Fillory fountain was. Amazingly enough, Josh knows exactly where it is and their actual problem is getting passed the mercenaries who want to kill them. 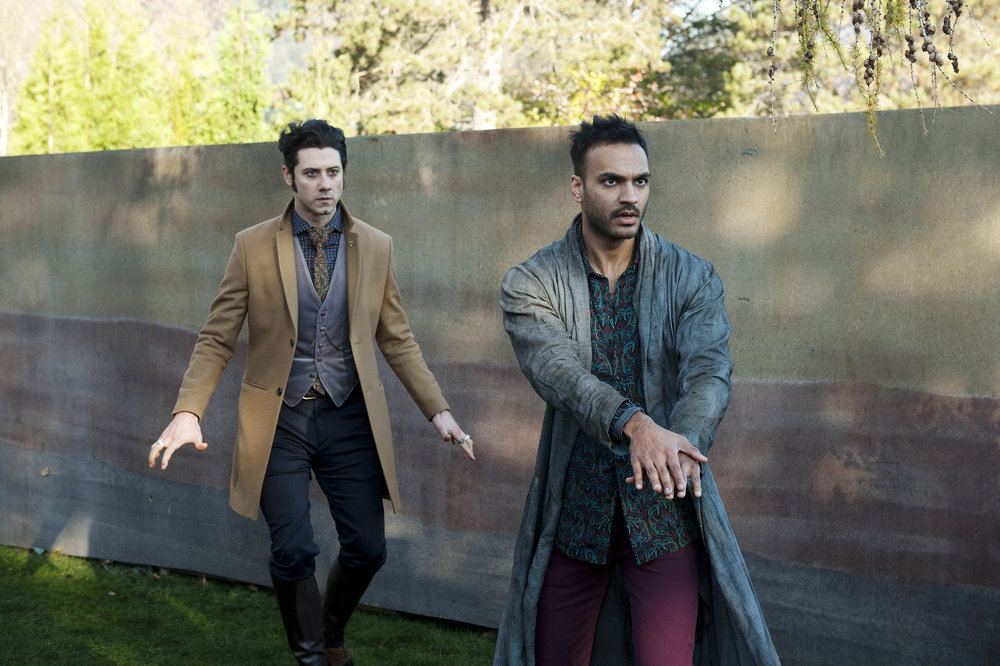 Alice ends up with the solution and she uses her phosphomancy to bend the light around them so that they appear invisible as long as they stick close to her. It almost works without any issues except that Eliot got stoned by eating Josh’s psychodelic carrots and lingered too far behind. Before one of the mercs get to him though, Margo shoots the guy. Hell yes she brought a gun! Battle magic is all great but a pistol works just fine too. They all jump into the Fillory fountain and Penny almost doesn’t make it because Eve is blocking his way. Forced into action, the traveler winds up killing her with a wound to the chest. He follows the rest into the fountain right before the other mercenaries arrive.

Meanwhile, Quentin has managed to dose Dean Fogg’s tea with a dollop of truth serum to find out what the heck is going on and boy do we find out. He asks the dean who Eliza really is and learns that she is in fact Jane Chatwin, but she is also still quite dead. This has a huge impact because Jane has been playing with time magic. We discover that Q has given Dean Fogg the truth serum twenty-seven times but the elder man is strong enough of a magic user to know that he is in a time loop he is just unable to do anything about it. Jane has been resetting the time loop over and over again and changing the circumstances in hopes that the outcome would be different. Unfortunately it always ends up with Q dying (he has died 39 times). Unfortunately there are no do-overs as Jane isn’t there to reset events. This is their last chance to get it right.

It all makes sense now why the Librarian knew who Penny was and kept saying that he was late and always asks the same question. This also explains why she knew they were all coming and greeted Margo as Janet (this time!). In addition, Q finds out that Jane altered Julia’s circumstances in this round. In all the other instances she was at Brakebills with the rest of them, but this time she wanted to see if being out of the school would make Jules become a better and stronger magician. It might have just worked out in their favor after all because Q reunites with her and explains the whole story.

Jules, who had just summoned the goddess with Kady (Jade Tailor), Richard (Mackenzie Astin) and the rest of Free Trader Beowulf has finally figured out that the purpose of magic was to fix things and essentially help people. She and Kady first had to meet with the servant of the goddess and they him offered 3 gifts – flowers, honey, and their faith (although they had to work a little bit on Kady’s faith). Still, the servant accepted their tithes and gave them the summoning spell. The goddess then granted all of them their requests and sent them on missions. Jules tells Q that she was told she would discover a whole new kind of magic and as crazy as it sounds she thinks they are going to find it in Fillory and so she agrees to go with him.

The two apologize to each other for all the screwed up things they’ve done and work together to find another way into the mystical land that they both imagined since childhood. Jules gets an idea from something that Richard and the others performed and says that they can use an object tied to the past to bring them back to a specific date. Speaking of Richard, Julia and him hook up before they did the summoning spell. But he does give her his Brakebills alumni key which allows her to go with Q to the school to find an object that they could use. They find an old essay where in some students had wanted to go back in time to stop Hitler except it didn’t work out because the fuhrer was actually good at battle magic and killed them all. Q connects that the time frame would work though because Jane also found a portal back into Fillory two days after that. So they take the portal in Margo’s room to a pub in England, then sit on a park bench and perform the time spell and it works! They jump back to the 1940s and follow Jane into a telephone booth where the portal appears and then enter right after she does. Boy are they lucky that it stayed open. 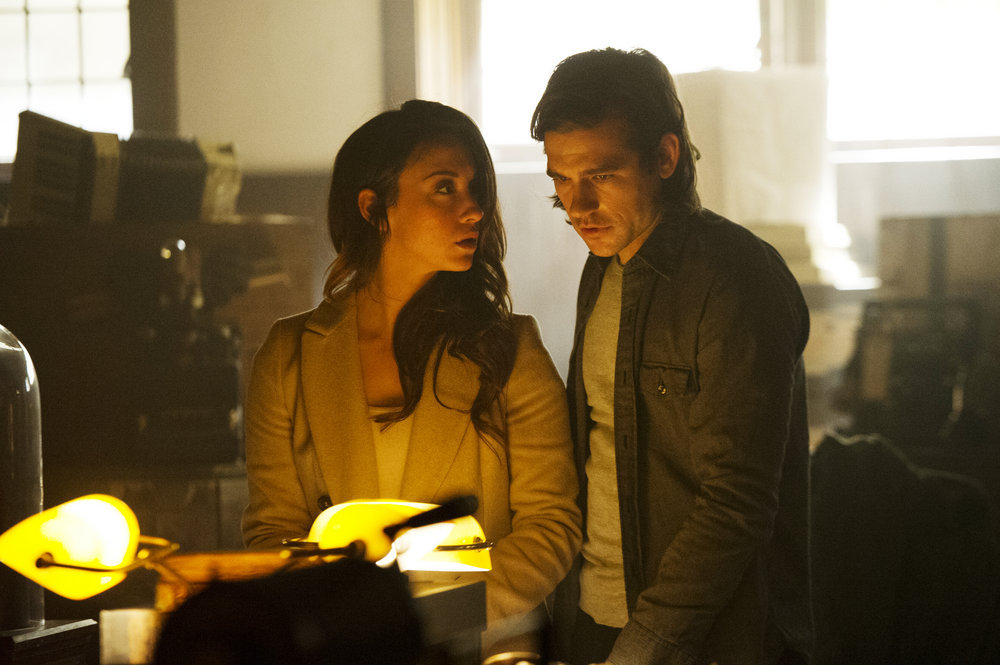 So against all odds the whole squad manages to get to Fillory and now a new chapter in their misadventures begins. It’s a cool moment for Q and Jules to go through together though after all the crap that’s happened between them. Could this be a new beginning for both of their characters? Now though they gotta get that god killing blade and deal with The Beast! Despite the multitude of crazy and screwed up events that happened to all of them in the process, they finally made it into Fillory.

Next week will be the season finale and I can only imagine what kind of cliffhanger we’re going to get and then that long, cold, and lonely wait until next year. But I’m going to try and not think about it for now.

@theworkprint
Follow
Previous article
‘Hyrule Warriors Legends’ Review: Is It Worth The Double Dip?
Next article
‘Rogue One’ Teaser Trailer is Here