‘Dancing With the Stars’ Review: Nothing Says Latin Night like Donald Trump

So here we are in Week 2 of the ballroom madness, and already, Season 22 is off to a fascinating start. This week was “Latin Night”, which brought with it, a lot of interesting choices, some which made more sense than others. Lets get right to the action, and to our first elimination of the season, shall we? We only have 2 hours before Len has to be in bed. Here we go!

They did the Argentine Tango. During rehearsals, they showed what a loon Marla is with her over-the-top healthy lifestyle, and Tony’s hilarious reactions to her eating things like hemp, seeds, and PH water. She also doesn’t wear deodorant because of the chemicals (poor Tony), and was in weird yoga poses over and over again during rehearsal footage. The dance, to me, seemed like it was in slow motion or something. Len called it “clean and polished”, which is very unlike his old man, wrinkly ball-sac. Scores were 7/6/7, and grumpy Len was responsible for the 6, of course. 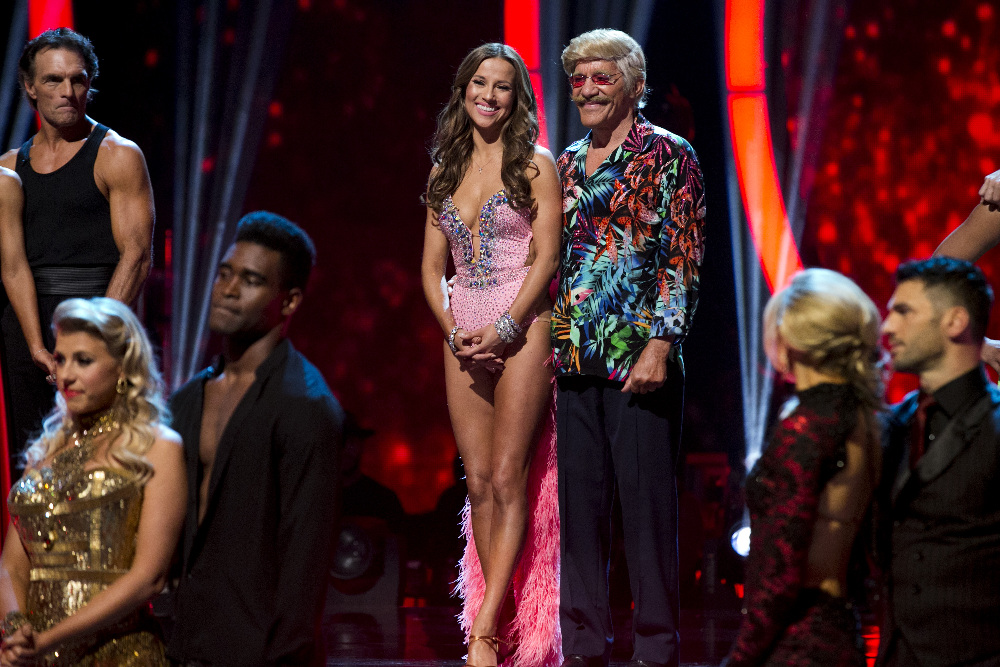 Most confusing dance of the night. I don’t even know where to begin with this trainwreck of a routine. What on earth was happening here? So Giraldo was supposed to be Donald Trump. First of all, why? How does that have anything at all to do with Latin night? Edyta was supposed to be Melania, Trump’s wife. And then, for no reason whatsoever, they were supposed to be in Mexico, because that seems like a logical place for Trump to be. I guess they were trying to make a joke out of the whole “build a wall” thing, and keeping the Mexicans out, and all that. But literally, it made zero sense. He was President Trump, but his awful wig and his very real mustache made him look a lot more like a creepy 70’s porn star. Plus, his impression of Trump was terrible, even worse than his bad dancing, which was pretty bad. The background of the dance floor looked like it was puked on by someone who has a very tacky idea of what Mexico probably looks like. Palm trees, sombreros, bongos, and some sort of carnival thing happening behind them. Nothing about this was even Trump-like, NOR was it Latin! It was just mass chaos, and again, Giraldo walked around the dance floor, barely moving at all and smiling his creepy open-mouth game-show host smile. Horny Carrie Ann said “You did NOT make dance great again.” Bruno said: “the content – I am not sure what it was.” Me neither, Bruno. Tom Bergeron had the line of the night with his observation to Giraldo about his Trump impression: “Your hands are too big.” Scores were horrifying at 5/4/4. OUCH.

So Mark hurt his back during rehearsals and slipped a disc, leaving him unable to dance indefinitely. Pro dancer Alan stepped in and partnered with Paige for this week, with only a few hours notice until the live airing. I have to say he did an amazing job, and so did she. They did a Salsa, and with hardly any practice together, there were a lot of lifts in this routine, and they got them all beautifully. This was a great dance all the way around. Len agreed, calling it “the best dance so far of the season.” Bruno yelled “You were unleashed with organic explosion!”, whatever that means. Horny Carrie Ann’s comment made even less sense and went on longer: “Yeah! Ho! You just like, wow! Like, you, like, showed us all the soo-soo-sissy-soo-woo-woo ……. Yeah!!!” What the fucking fuck? That is literally what she said. Calm down, lady. Take your medicine. Scores were high at 8/8/8. 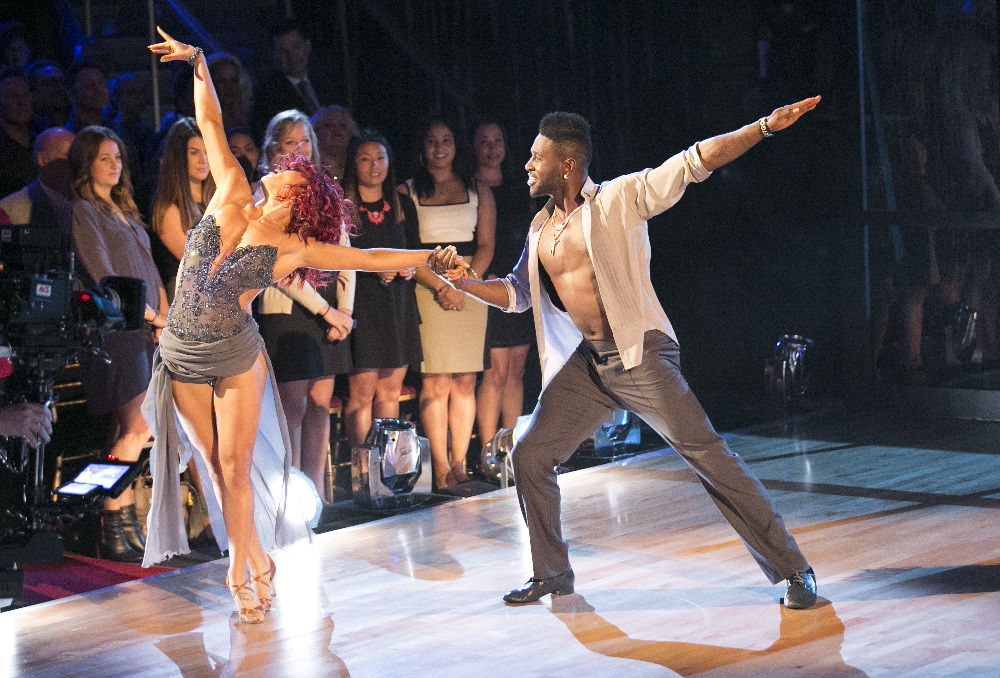 They did the Rumba, which is a very sexy and romantic dance, very seductive. The judges seemed to be mixed on their reviews, and all over the place with their comments. Bruno said “You are blessed with all the right equipment.” Wow, Bruno, THAT’S subtle. Then he hit Len again with his arm movements, and Len made a grumpy face because it was past his bedtime and nobody has read him a bedtime story yet. Len thought the dance needed “a little more finesse”, sort of like his urine stream late at night. Scores were 6/6/7.

So apparently, Kim is a big Gloria Estefan fan, and they did “Conga” for their Salsa. Sasha surprised Kim during rehearsals with a Skype visit from Gloria, and Kim screamed like a maniac with excitement. Their dance was energetic and fun. Carrie Ann said “you light up the stage!” Len thought it had good promise and potential, unlike his sex drive. Bruno yelled something about shaking that tooshie “like the best!” The best what? Backstage, Erin Andrews referred to Kim as “Tootie” several times, which I enjoyed immensely. Scores were 7/6/6. 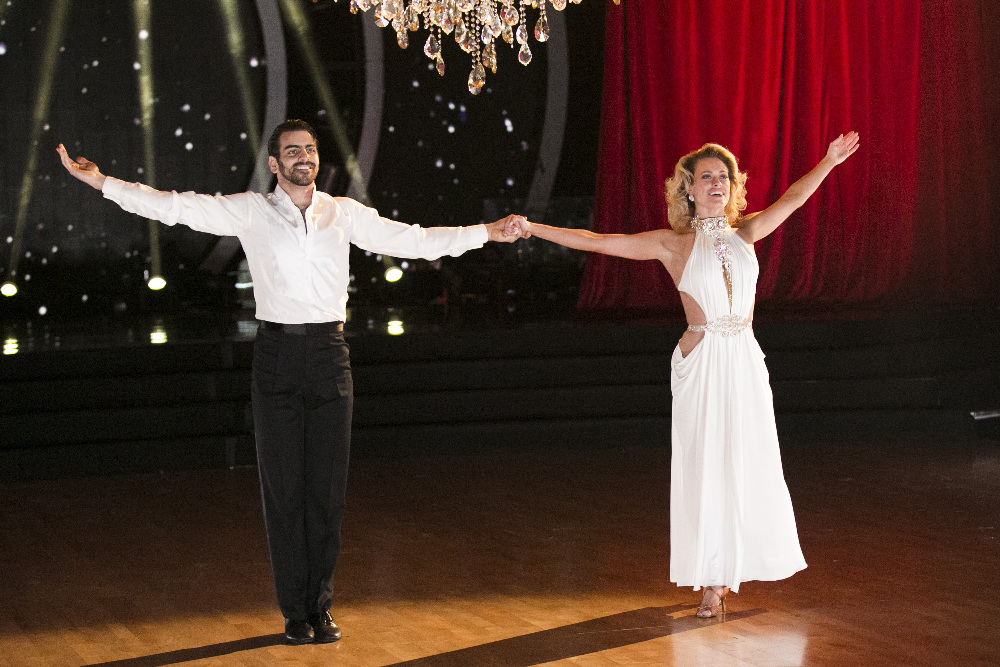 They did the Rumba, and let me just say once again for anyone who is still unaware, THIS MAN CANNOT HEAR A THING. HE IS COMPLETELY DEAF, AND HE IS DANCING IN COMPLETE SILENCE. And yet, his first two dances have both been absolutely stunning and beautiful and extremely rhythmic. Also, just a sidenote, he himself is stunning and beautiful. Anyway, they did the Rumba, and his parents, who are also deaf, showed up at the rehearsal to watch. Len did not like it because he was grumpy since nobody brought him his favorite cereal. “It’s all too hectic and full of attack!”, like his bladder control issues. Carrie Ann thought it was stunning. Judges took off points for illegal lifts. Scores were 7/6/7, which I found to be way too low.

This chick is annoying as hell. All she does is whine and complain, and her voice sounds like cheese bring grated and then the grater being dragged across a chalkboard. She was going on and on about how she cant hear the music right, and how its soooooo hard with the live band, and how this and that was wrong , and , and ……… THE GUY THAT WENT RIGHT BEFORE YOU CANT HEAR A THING AND HE WAS BRILLIANT AND HASNT COMPLAINED ONCE, SO MAYBE CHILL OUT, WOMAN!!! Bruno said it didn’t fit to the music, then added “if it doesn’t fit, it doesn’t fit.” (That’s what she said!) Scores were awful at 5/5/5. 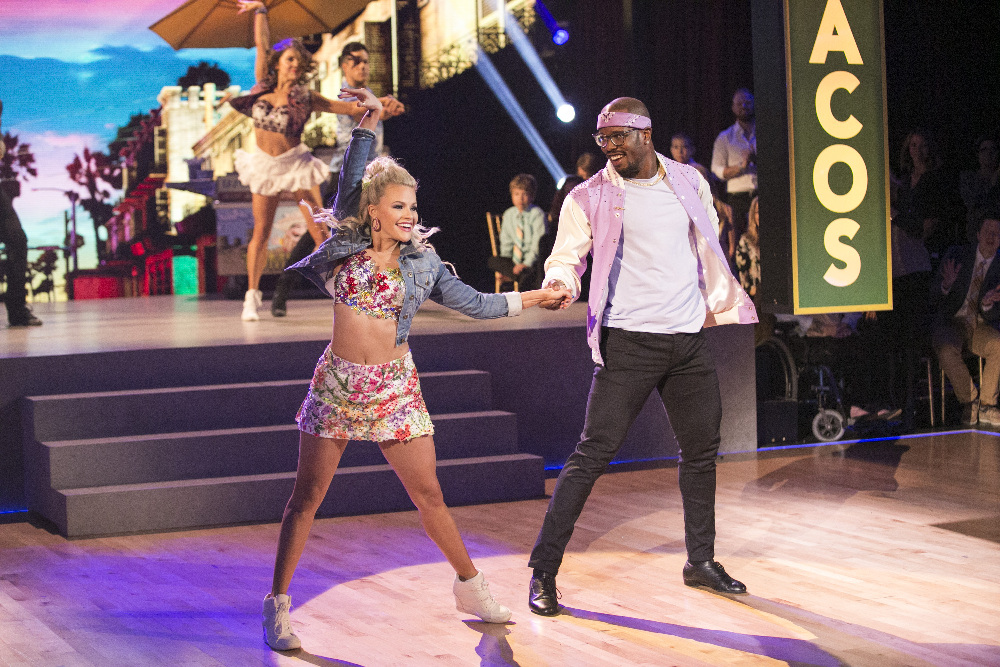 They did the Cha-cha, and their rehearsals consisted of him farting over and over , and her fining him $100 per fart, and $500 each time he is late to rehearsal. They give the money to charity, but its an entertaining thing to watch. Bergeron was in their dance as a vendor selling “Tom’s Tacos”, and quipping about the cameo: “This is what happens when you miss a production meeting.” Len compared the dance itself to a taco in one of the worst similes I’ve ever heard: “It was like a taco. Tasty in places, but some funny bits going on.” What? That doesn’t describe a taco at ALL. Scores were 7/6/7.

They did the Salsa, and this guy moves so well on the dance floor, its crazy. But I still don’t understand why his name is Wanya. What kind of name is that? Len said “I’m full of praise”, to which Tom replied: “That’s good, because earlier, the audience thought you were full of something else.” Bruno said something about A to Z that made no sense. Scores were 8/8/8.

They did the Paso Doble, which was a bullfight scene, and Flutie used his own son’s battle with autism to help him out emotionally to get into the fighting character. It seemed to work, and he did quite well with this one. I loved the music choice and the energy of this dance. Bruno called him Sparticus, Carrrie Ann said “Flutie is in the game!”, and Len said it had “attack and purpose!”, unlike his ………. well ….. you know. Scores were 7/6/7. 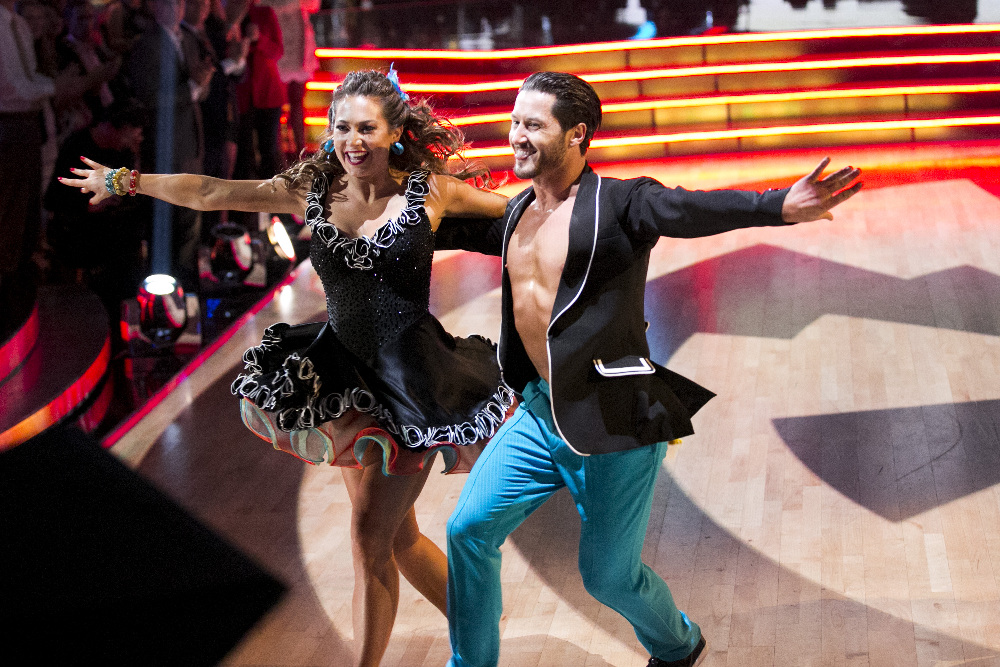 They did a Samba, and I will be honest here and tell you that by the time I got to this part on my DVR, I could barely stay awake anymore, so I have no notes about this dance written down. I’m sure it was very lovely, and I recall Bruno saying that Ginger Zee “brings the feel good factor!” That’s all I got folks. Scores were 7/7/7, and Len can finally go to sleep.

So the first person eliminated from Season 22 is Donald Trump …. i.e. …. Giraldo Rivera as Donald Trump, if he was Latin, in Mexico, with a mustache, for no reason. Goodbye Giraldo. Now you can do more of your newsman thing and reporting thing on Fox “News.” (Giggle giggle. Its funny every time.)

Wanya realizes he has a girly name and cries in the corner. Tootie comforts him, until Erin Andrews points out that her TV name was “Tootie.” Then they both cry. Len takes a 14 hour nap on the dance floor.

Previous article
‘The 100’: Let’s Evaluate All Those Major Character Deaths
Next article
‘Hyrule Warriors Legends’ Review: Is It Worth The Double Dip?