You know the drill. This is Game of Thrones. Everyone dies. If you aren’t caught up and don’t want to be spoiled through season 6, episode 1, then fly away little dragons.

It’s the most wonderful time of the year. Time for a new season of heartache and agony with Game of Thrones. Which favorite character will they kill next? Which villain will prosper? Which episode will get the bulk of the budget for an insanely large and awesome battle sequence?

Season 6 of Game of Thrones is quite the anomaly because for the first time in the history of the show, book readers have no clue what is about to happen. We’re all sweet summer children now and my god is it terrifying.

Last season was a rough one for Sansa Stark, the roughest yet. With Theon in tow she’s escaped her home of Winterfell and run for the north, hopefully toward Jon and the Night’s Watch. Unfortunately for her, she and Theon made a mess of Myranda and that upset Ramsay, forcing him to send his best dogs after the pair. Roose makes sure to remind Ramsay that the north won’t support a Bolton regime without Sansa Stark and Ramsay is all, “Okay yea yea but did you see what I did to Stannis’ army? Pretty flay-some, huh, dad??” The scene between the Boltons was an odd one for me. We know that father and son are both loose cannons in their own way. Roose is more calculating, ready to play the long con, whereas Ramsay lives entirely by their house motto. Gaining and keeping Sansa Stark was incredibly important for them politically and as I’ve said before, it’s odd that Roose would let Ramsay treat her like another play thing and even more odd he’d be so calm about her escaping. Granted, he knows just where to stick the knife when it comes to Ramsay, reminding him yet again that should his wife, Fat Walda, have a boy, Ramsay is no longer heir to the north.

Sansa and Theon meanwhile flee in the bitter north cold, wading through frigid waters and mussing up their hair. Just as their luck runs out a beautiful blonde knight saves the day, cutting down the Bolton men (and their dogs, I assume, because why would Ramsay’s best dogs run from a fight?) and swearing her allegiance to Sansa “Queen in da Norf” Stark. I LOVED the image of Brienne Tarth riding in like a damn hero, sword drawn, ready to lay down her life to protect her lady. We’ve waited three seasons for her oath to Catelyn Stark to come to fruition and now that it’s happened, I never want them to part. Also, how sweet was Pod helping a freezing Sansa remember the words? And Theon was okay, too.

Margaery Tyrell is still in a cell being tormented by the Faith Militant, but at least she’s not in Dorne, so she’s got that going for her.

Cersei was dealt another low blow in the opening episode of the season and as I watched her emotions transition from elation to devastation, I’m left wondering how anyone could truly hate the Queen Regent. Yes, she’s manipulative, selfish, and incestuous, but dammit, this is a woman who loves her children above all else. As she professed her feelings to Jaime about how good Myrcella was, how she was nothing like Cersei, I truly felt for this woman. There was no love lost when Joffrey died and even Cersei admitted as much, but Myrcella was truly an innocent in all of this, more so than Robb Stark, Jon Snow, and any of the other main characters who’ve died. And even though I’m still bothered the show has chosen to ignore some of Cersei’s best moments, I am glad we get to see her in this dark hour, see the truth of who she and Jaime both are, knowing that their pain will not go unpunished. Doesn’t that make you root for the Lannisters even just a teensy bit?

Arya, cast out from the House of Black and White, is now a blind pauper on the streets of Braavos. Her story is as brief as it was in A Dance with Dragons, consisting only of her panhandling and a stick fight the Waif. It wasn’t much, but maybe she can join up with Daredevil and fight crime.

Ah! It’s everyone’s least favorite plot, Dorne. With the death of the Princess Myrcella, I fully expected some shade to drift down to the sands of Sunspear, but I definitely didn’t see the Sandsnakes going full-blown coup coming. I mean, that was some Civ V broken allegiances bullshit.

It’s almost as if the writers felt our disdain for the Dorne plot last season and went, “You know what? Fine. We’ll just kill of the Martells. That’ll fix the problem.” No matter that the Martells were the likable bit and the Sandsnakes were infuriating. Guess D&D are taking after GRRM after all. I have a few issues with the story in Dorne, outside of the death sentences handed out like candy. One, Areo Hotah is supposed to be a skilled fighter in charge of the Prince’s protection. You mean to tell me that NONE of his guards were loyal to him? Not even one? Two, how in the world of Carmen Sandiego did the Sandsnakes get on board Trystane’s ship? Weren’t they are the pierside send off at the end of the season? Three, what idiot turns his back to a woman who wants him dead? Four, UGGGGGGGGGGGGGGH.

Tyrion and Varys skip the cobblestone streets of Meereen, holding hands and reminiscing about when they used to be wealthy. They openly talk about the Sons of the Harpy and those who may want Dany and her followers dead and I can’t help but question their intelligence in doing so. I mean, there were men in gold masks trying to kill them and I’m pretty sure most enemies of the Mother of Dragons would remember the dwarf at her side. That being said, the duo is still the best on the show, even if they delivered the line that crushed a million viewers hopes and dreams. 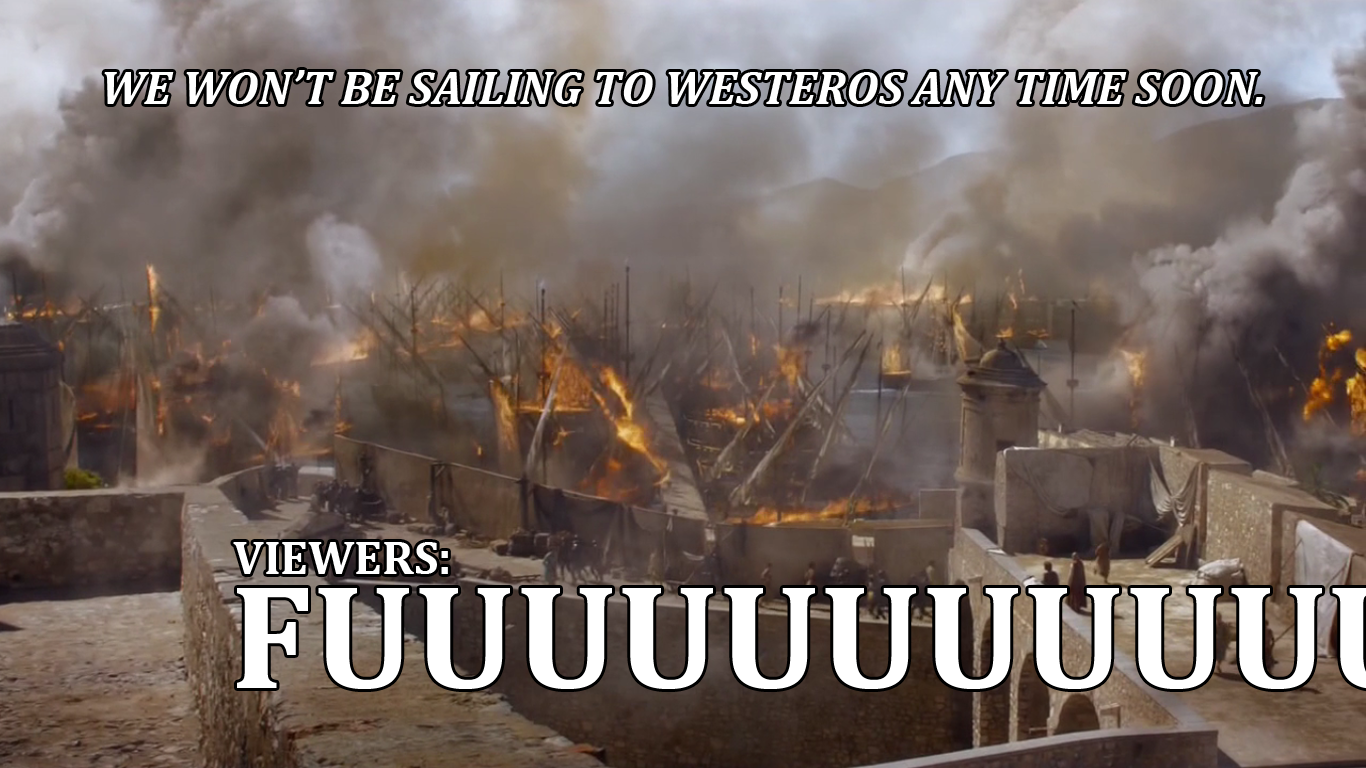 Jorah Mormont and Daario Naharis continue their buddy travels through the mountains surrounding in search of Daenerys.  They share a few words about their mutual affections toward the Mother of Dragons, waxing poetically about what a good leader she is and how they can’t wait for her to take what’s hers with fire and blood. Though, as Tyrion hinted at earlier, it may be a while before that particular prophecy comes true. Jorah takes a moment to remind viewers that he still has greyscale and that for all the book readers out there, this season he’ll be playing the part of Jon Connington as well as love-stricken and banished knight, Jorah Mormont. He finds Dany’s ring and realizes that she’s been taken by a large Khalasar and that they might be in over their heads.

But don’t worry! The power of love will help them save the day!

Meanwhile, Dany is bound but she is anything but a prisoner. She’s tired and frustrated, but she never lets Khal Moro’s goons see it or let on that she understands every filthy word out of their mouths. When one of the men strikes her with a whip it only strengthens her resolve even more. When presented to Khal Moro, she keeps her head high, silent and unafraid. Only when he attempts to touch her does she snap back at him in Dothraki. She then explains who she is and that she’ll be a needing an escort back to Meeren thankyouverymuch. Khal Moro agrees to keep her safe and untouched out of respect for Khal Drogo, but he won’t take her back to Meereen. Instead, he’s taking her back to Vaes Dothrak and for the first time in the episode, Dany looks frightened.

The episode started and ended at Castle Black and for good reason. Jon Snuh’s death was maybe the biggest of the series thus far, so it’s important much of the show’s focus be on the aftermath of that murder. Ser Davos finds our poor Lord Commander and with the help of Dolorous Edd and three nameless crows, they carry Jon’s body inside which seems like a great idea considering he’s now a prime candidate for being part of their greatest threat:

Aliser Thorne wastes no time in confronting the Night’s Watch about the Lord Commander’s death and even fesses up to his actions immediately. Thorne truly does see himself as the hero in this narrative. He was never Snow’s biggest fan but in his mind, he’s saved the Night’s Watch from Snow’s reckless heroism. Many of the men still call him murderer and I wonder what happens once the Wildlings and Tormund Giantsbane find out about Thorne’s treachery.

Personally, I hope Olly gets to meet Wun Wun.

Meanwhile, the Red Woman pays a visit to the soon-to-be-Emmy-nominated corpse of Jon Snow and laments that she saw him in the flames, fighting at Winterfell. Melisandre is a broken woman at this point. She’s failed Stannis, failed Jon, and now she’s doubting everything she’s ever done in service of the Lord of Light. It’s a fascinating arc, watching this woman most of us hated from the beginning fall apart after questioning her faith. Much the same way Cersei loves and believes in her children, Melisandre believes in the Lord of Light, and it seems R’hllor has failed her. It is for this reason, I believe, that she removes her glamour, forcing herself to gaze at the body she’s hidden for so long, forcing herself to come to gripes with the parlour tricks her religion has granted her, but not true power. As an old woman, she lies down in bed and goes to sleep, hopefully not for the last time.

Because we need her to install Jon Snow 2.0.

I thought we were supposed to see Bran Stark this episode and now I feel a bit lied to. Not that I’m that disappointed. Bran’s story is always the worst, but I think I would have taken any plot with him over the nonsense going on in Dorne.

Gendry is still out rowing that boat and now we know what he was rowing away from.

Hey! None of the main female characters died, so we’ve got that going for us, ladies.

I’m kind of glad that Jon wasn’t resurrected right away. It would have cheapened his intense death scene last season and ruined all those lies the actors and writers told us in the off-season. (And it’s sweet watching Davos have a purpose again.) But now that we have one episode of Dead Snow, you guys can go ahead and bring him back in episode two so we can finally give a win to the good guys in this god forsaken show.

@theworkprint
Follow
Previous article‘The 100’: The Good, the bad, and the ugly decisions in “Demons”
Next article11 Big Moments On This Week’s ’12 Monkeys’