After last week’s stunning episode, “Demons” was promoted as a horror episode, one that seemed an interesting prospect for The 100’s characters. In the world of The 100, everyone has demons to face, so I thought this episode would force the characters to come to terms with the decisions they had all made in recent episodes: taking the AI chip, siding with Pike, stealing the throne, killing friends and loved ones, leaving loved ones behind. So many of these characters have a darkness inside them that needs to find its way out, but the subject wasn’t approached as deeply or as cohesively as they have been in the past. Instead, “Demons” played out more like a season 1 episode where Skaikru didn’t know the true nature of the Grounders and some of the characters reverted back to their ridiculous decision-making ways. 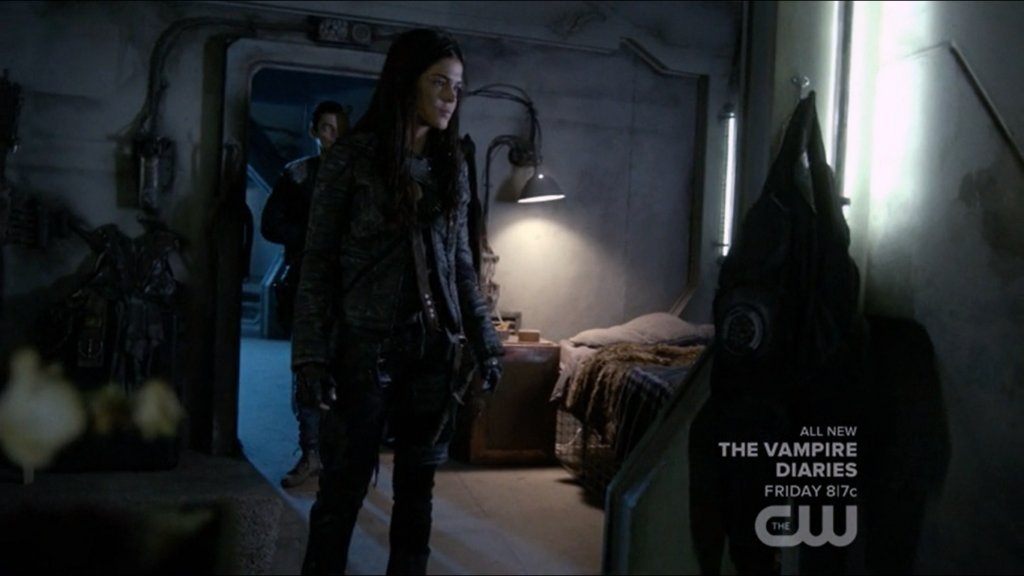 Octavia, two episodes later, was finally able to mourn the loss of Lincoln in a proper manner. Lincoln and Octavia’s relationship, for some (me), has been the heart of the show, the proof that violence isn’t necessary and love can bring peace. When Octavia went into Lincoln’s room, the room she hated for him to be in, she inhaled the scent that lingered on his jacket and fell apart. And I fell apart right along side her. Say what you will about Octavia: the Early Years, but present Octavia is killing it with the emotion. So much of The 100 is based on facial expressions and acting with the eyes and these actors, when given the chance, nail it every single time. You could feel Octavia’s struggle, wanting to give in to grief but also wanting to stay strong for the sake of his memory. Hands down it was the best scene of the episode.

The change in Raven is fascinating to me, the idea that she still has lingering knowledge in her head because of ALIE is neat twist. I hope it doesn’t lead to Raven being able to be controlled again and I’m sad only Sinclair seemed concerned about it; I’d love it ALIE’s chip altered Raven’s blood to be able to accept AI 2.0, but that’s just wishful thinking.

The ultimate demise of Emerson was gruesome and satisfying at the same time. While I was sad to see Sinclair go, it was only a matter of time with him being the only adult on the Adventure Squad. The face off between Clarke and Emerson was an important one. Clarke is constantly faced with her actions at Mount Weather, so it would have been easy for the writers to have Emerson stay gone after being banished, but nothing about The 100 is easy. With Emerson coming back and killing Sinclair, putting the lives of her friends at risk, it calls into question her ability to make “good decisions,” much like the struggle Bellamy has been facing all season. Like Clarke said last episode, there are no good guys and sometimes you make a choice based on what you know in the moment. You only know if it’s right or wrong when time goes by. In this case, Clarke feels like it was the wrong decision, but if she’s learned anything from Lexa, she’ll accept her choices and move forward.

These hard choices are the ones I want to see in The 100, they’re the reason why I watch. I want to watch Monty grapple with the knowledge that destroying ALIE means saying goodbye to his mother for good or maybe he takes the chip to apologize to her in “person.” I want to see Ontari face the repercussions of her lies or Bellamy face the true meaning of his descent. I want to see the Blake siblings gaze at one another before they feel the grip of death and fear they won’t ever get to apologize to the other, only to have them walk away from one another when they get the time to reconcile. I want those moments, not some cheesy horror plot. 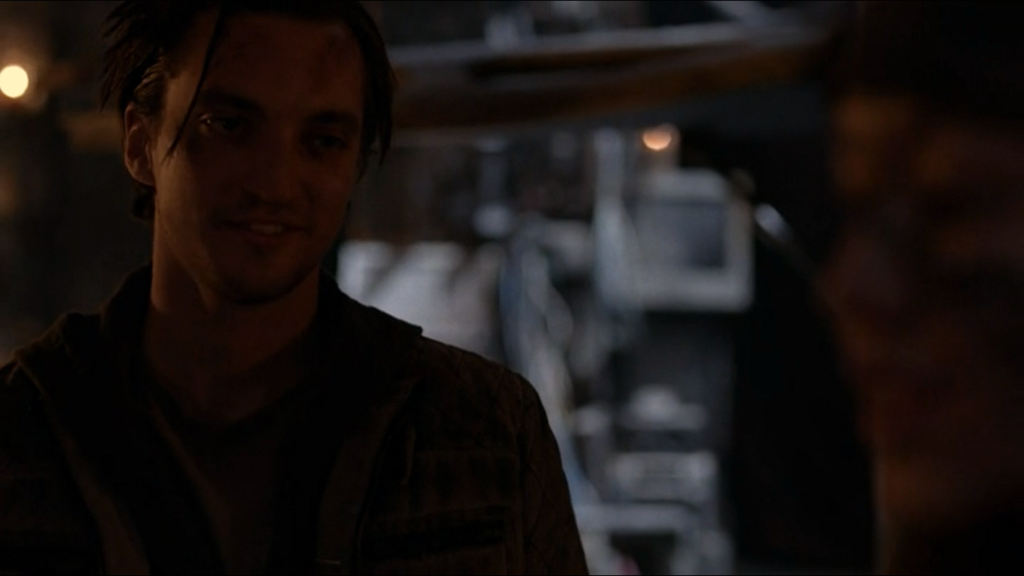 Most of the Polis story was solid but I still don’t find Murphy as engaging as a character. I appreciate his shift from season 1 but I can’t connect with him the way I have with others. I don’t buy the romance and I was honestly uncomfortable with Ontari essentially raping him last week. That being said, he was the best part of a Polis storyline where Jaha has magic legs that get him to Polis before Kane and Indra. Murphy and Ontari have a lot in common, they both want power but they will also do anything to survive. This habit, however, puts Murphy in jail and leads Ontari to taking the City of Light pill.

I’m disappointed in Ontari not because she took the CoLaid, per se, but because she was so inherently trusting of Jaha when up to this point she’s been a childish murdering psychopath. Jaha made her look stupid in front of her subjects and for that I expected him to die or at least be maimed. I thought maybe once she saw him not react to the pain of her blade then she would concede but the simplicity of the “transaction” was frustrating. Of course she took the pill because deep down she’s insecure and terrified of being found out as a fraud, but her first instinct when being confronted has always been anger, not quiet fear. Didn’t she stab someone for giving her the side-eye once? The ease with which she accepted Jaha’s offer screamed out of character to me. At the very least he’s Skaikru and Emori is a malformed con artist so that should have been some cause for concern for her. Perhaps I’m just disappointed because I hoped Skaikru would have to form an uneasy alliance with Ontari, but now it just looks like Kane and Indra are walking into a chip-trap. 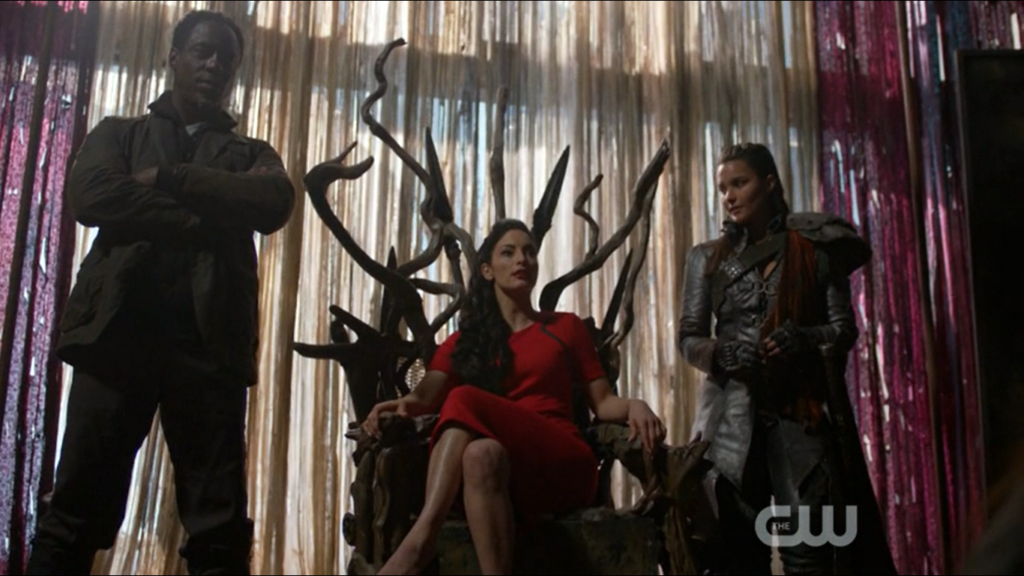 For as disappointed as I was that Ontari took the chip, I’m even more upset Emori conceded, especially since she and Murphy were the first to witness its strue power. Granted, Jaha could have overpowered her, threatened her with her brother’s spirit in the City of Light, any of these things, but we don’t really know what happened and that’s a shame.

And I’m not sure I agree with the smirking image of ALIE sitting on Polis’ throne. ALIE is cunning, sure, but she’s a program fulfilling a duty, not a conniving human seeking more power. Her entire intrigue is based on the fact that she isn’t a mustache twirling bad guy, but an AI who thinks she is doing the best thing by relieving suffering in any way possible. I appreciate the metaphor behind it, but it feels too over-the-top for her.

Oh the Adventure Squad front: Clarke, Monty even said you shouldn’t follow the creepy music down the hall, what are you doing? That action was  reminiscent of season 1 Clarke, a Clarke who was more trusting of kids toys and enemies. Season 3 Clarke is Wanheda and dammit, she knows better. Stop walking into obvious traps.

Clarke, you really associate “Blood must have blood” with Lexa THAT much? Goodness.

Did Sinclair really need to die or was that just horror fodder? Because of the nature of the episode, everyone nearly dying, his death felt like a footnote, especially with Octavia still mourning Lincoln.

I really, really want there to be a breaking point where Bellamy’s answer to every situation isn’t to shove a gun in someone’s face. I know the changes he’s gone through as a character and I empathize but after last week and this week, he needs to realize that there’s more to this world than just guns and shooting people to survive. He once knew that lesson, especially when Finn was beginning to descend into darkness, but he’s lost his way again and I need someone, anyone (preferably Octavia), to call him out on his bullshit.

There are only 4 episodes left and “Demons” felt a lot like filler. When there are big character development scenes left to play out, major characters still to meet, an episode like this with all the delinquents together feels like a waste. This group is special and as we saw last episode, having them together brings about magical scenes and growth. But now they’re separated again and dammit, I wish they’d hurry up and meet Luna.

Previous article
‘The Flash’: Who is the Man in the Mask?
Next article
‘Game of Thrones’ – “The Red Woman”: Everyone’s Lookin’ A Little Bit Dirty These Days